Striking a chord with a hymn for the ages

At September’s Getty Music worship conference in Nashville, a blonde duo waited backstage, ready to push through the curtains to perform. The annual mega-­gathering of Christian artists is a dream platform. It has the kind of DNA that can forever link songs to singers, the way “In Christ Alone” is linked to event founders Keith and Kristyn Getty. The smiling Foto Sisters, pausing for a mic check, know all this. They also know to hold their hopes loosely.

How the pair of Louisiana natives arrived at such a moment —premiering their own hymn after negotiating it into the Getty catalog —is a question Katie, 27, and Gaylyn, 25, answer humbly: God’s grace. When pressed, they go into details that spark hope in any parent who’s ever paid for a piano lesson.

The classically trained Fotos began their music studies with ear training, a European method of note reading that doesn’t require students to know the alphabet. Violin lessons followed, as well as piano, cello, and voice. Their older sister, Addie, took lessons, too. It wasn’t long before teachers pulled Jimmy and Carolyn Foto aside, whispering that there was “something special” about their daughters’ musical instincts. It was enough to spur a whole-family buy-in, and treks for instruction kept roads between the Fotos’ rural home and Baton Rouge and New Orleans hot.

Homeschooling allowed the sisters to spend long hours in a practice studio constructed in their backyard, but it wasn’t a self-absorbed pursuit. They became regulars at hospitals and nursing homes, where delighted patients nudged them through “Great Is Thy Faithfulness.”

Katie says her mom was brilliant in that regard: “Anytime we wanted to be shy, she would look us in the eye and tell us shyness is selfishness and pride. She’d insist we get out of our comfort zone and go serve the people in the audience.”

It must have worked. The trio went on to perform in front of large crowds at church gatherings, NFL games, the Creation Museum, and G3 and Ligonier conferences. By the time they finished high school, the young women had to decide: attend college, where they’d study classical musical performance, or take a shot at Nashville? They chose Nashville. “Why bring it to a pause?” Gaylyn explains, referring to the opportunities coming their way. “We knew we could always do college later, but we couldn’t ­necessarily get this back.” 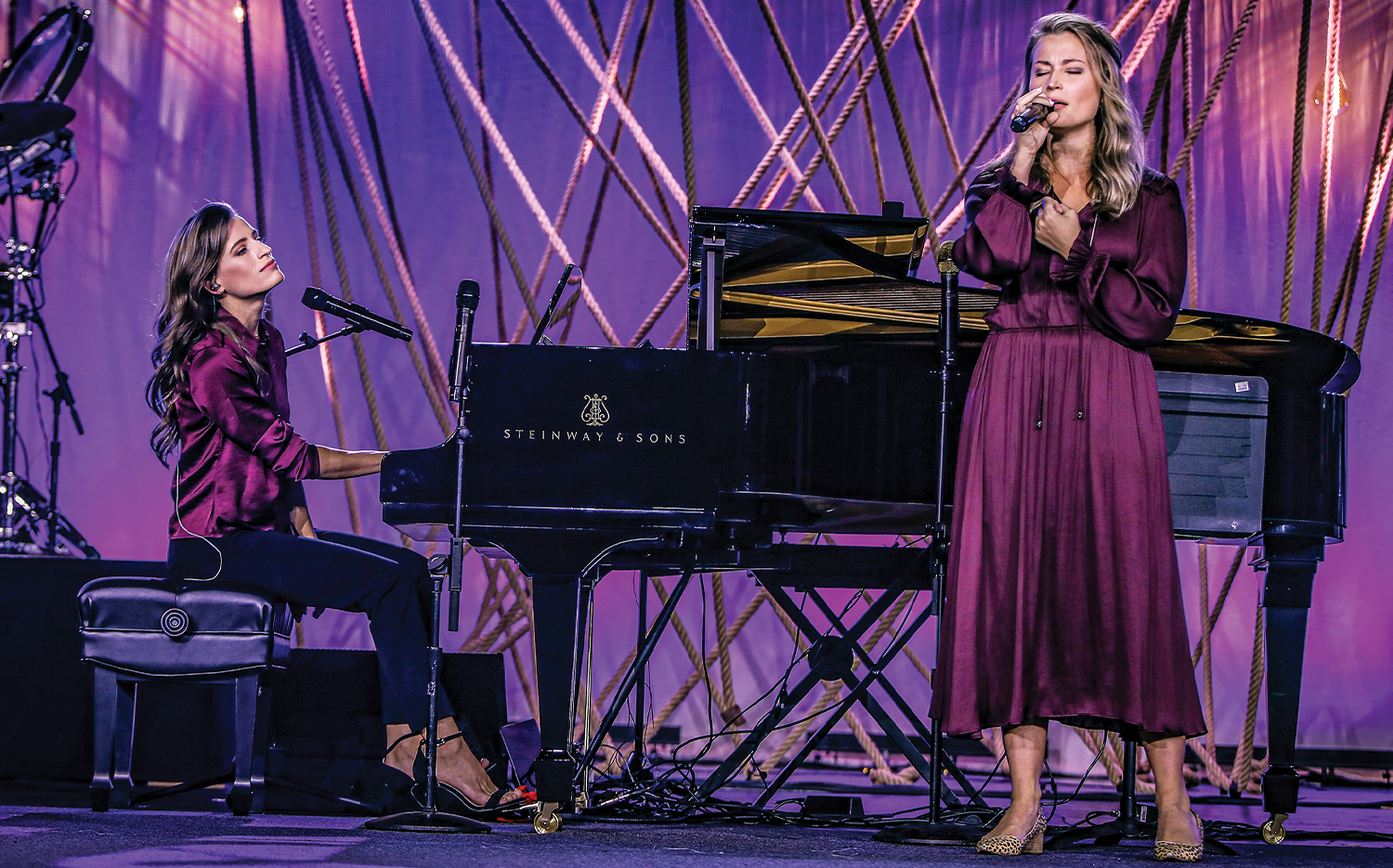 Katie (left) and Gaylyn perform “Sovereign Ruler of the Skies” at the Getty Music conference in Nashville. Jon Syrbe

BY THIS POINT in our interview, the sisters seem relaxed. The performance high heels have gone missing, Birkenstocks in their place. Still, the Fotos are careful not to speak over one another as they answer questions. They are polite, wholesome. Blessed with striking eyes and the kind of complexions that make for good publicity ­photos. That helped when they began their 2018 transition into commercial music. The family supported the move, buying a second home in Tennessee.

At first, the sisters’ classical training made them an odd fit, but they knew secular artists such as Andrea Bocelli and Celine Dion had made it work. A Christian classical-crossover genre was emerging, and the Fotos wanted to be part of it. It didn’t hurt that sought-­after producers like Kent Hooper and Phillip Keveren tutored the sisters in songwriting. “We branched out into a new world,” Katie acknowledges.

That world included albums and videos and tour schedules that blocked out more than half of every year. With 30-plus performances each December, they often spent Christmas Day on the road. Katie says she didn’t fully unpack her suitcase for a solid three years: “It’s very lonely, and when you come back you find that people have moved on without you.”

Gaylyn learned a local church ­connection was crucial. “That refreshing, that feeding. You have to be so purposeful about it. You think you’re getting away with neglecting it, that it’s not really affecting you, but it catches up big time.”

When Addie retired from the group in 2020, the two remaining sisters found themselves at a crossroads. “We decided to zone in on what kind of music we wanted to sing, what our message would be, even what we would wear on stage. We decided to be picky about everything,” Katie remembers. They began to meditate on God’s faithfulness and His perseverance of the saints, finding and writing songs that leaned into those promises. Then the pandemic hit.

With all their live events canceled, the Fotos returned to their home in Louisiana to wait out the virus. It was March, and fear was running rampant. “I even sanitized the mail,” Katie says as she shakes her head. In the middle of all the upheaval and uncertainty, the Fotos’ pastor posted on social media some vintage lines penned by English hymn writer John Ryland. When Carolyn Foto saw them, she immediately waved her daughters over to her computer screen.

Gaylyn remembers being “hit hard” by Ryland’s “Sovereign Ruler of the Skies,” by the deep theology threaded through all nine verses. She knew the words were timeless, yet timely: “God keeping our hearts believing in Him for salvation, but also just keeping us in times of plagues and death and fear.” The 18th-century lyrics, replete with thees, thous, and other bits of the King’s English, are public domain, but the Fotos didn’t know the original tune or melody. They decided to compose new music and add a chorus. “There was a beautiful skeleton of a lyric already there. It just needed to be more singable,” Gaylyn says. Within a week, their version was finished. Well, almost finished. One blank spot had them stumped.

His decree, who formed the earth,
fixed my first and second birth …

The Fotos texted their sister, Addie, to see if she had any ideas, but infant twins were consuming all of her ­creative energy. On a whim, Addie’s husband, Jonathan Monk, made a foray into the songwriting world. His suggestion—“Now to him my life I owe, where He leads me I will go”—went on to finish the verse. It also earned Monk co-writer designation.

Within two months, fans could download “Sovereign Ruler of the Skies” singles and sheet music, but COVID meant in-person performances were out of the question. Still, Katie believed the piece had more potential than anything else they had written: “I knew it really flowed, but I didn’t know how the Lord would use it.”

It was the first time the Fotos had produced a piece that held potential as a congregational hymn. It was also the first time Katie felt compelled to approach modern hymn-writing heavyweight Keith Getty with any of their work. She emailed him the YouTube link. “Our paths had crossed before, and we have mutual friends, so I was like, ‘You know, why not?’ When we wrote the song, we hoped the Lord would take the lyrics farther than we could. And in the back of my head, it was the Gettys singing it.”

Close to two years passed. “Sovereign Ruler of the Skies” circulated among churches, but the pandemic had changed the music industry. It had changed the Foto Sisters. They were becoming more selective about their projects. A song for a Hallmark movie? Yes. A monthlong summer tour? No. Meanwhile, Katie accepted a marriage proposal: “Music has been our life, but we’ve always wanted to be wives and mothers as well. Meeting my husband meant I gained that blessing, but I also had to let go of some other things.” 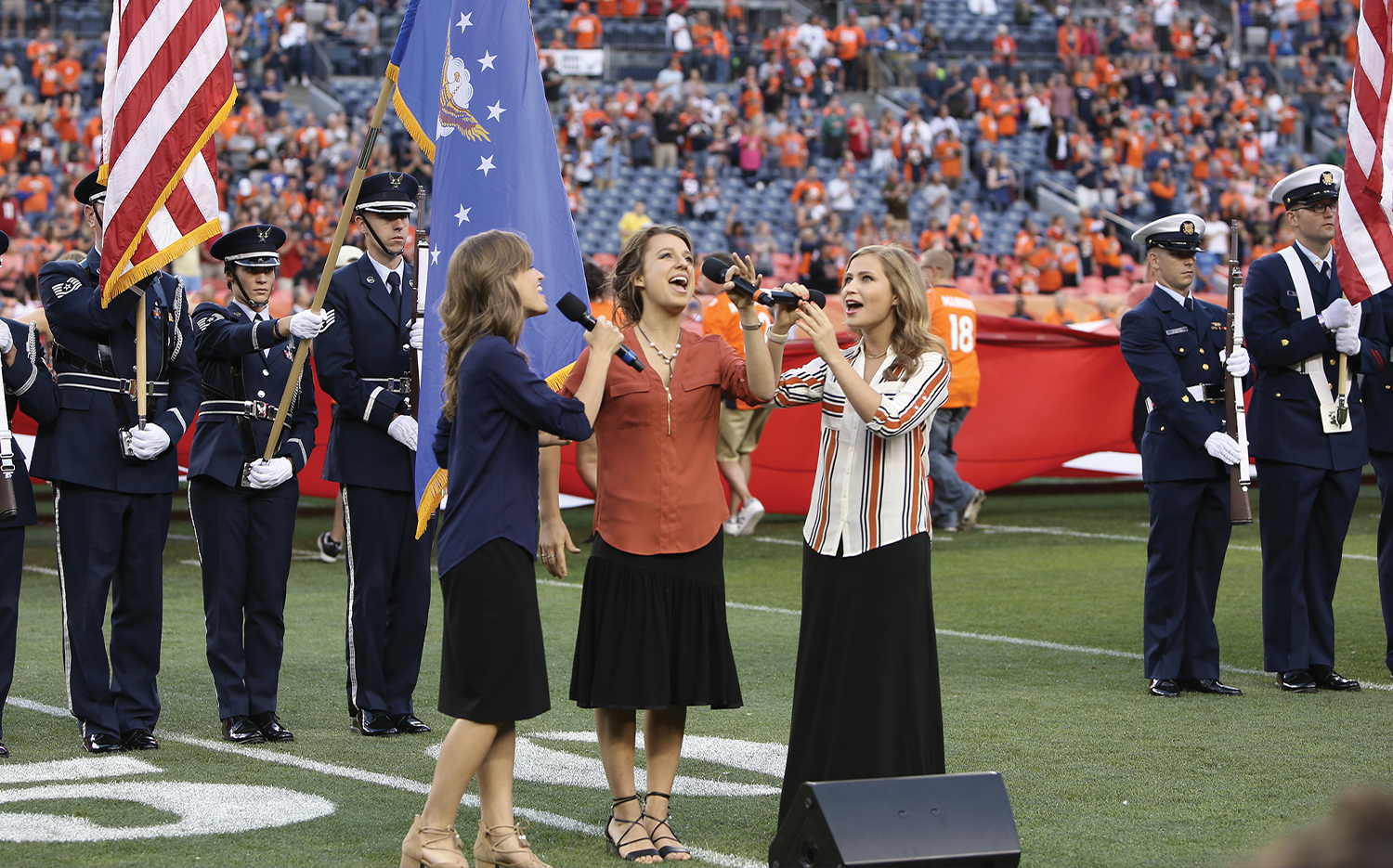 The Fotos, including Addie (center), sing the national anthem at a Denver Broncos game. Jimmy Foto

And that’s when Keith Getty called.

Katie smiles at the timing. “We took our hands off of the project, and that’s when the Lord did His work.”

Matt Merker is director of creative resources and training for Getty Music. He says they’re excited to acquire “Sovereign Ruler of the Skies.”

“We want to recover the best hymns of history. A hymn like Ryland’s, with the richness of the poetry and theology, it’s just unparalleled. And the fact that the Fotos knew about it, and they wrote this beautiful new tune to it, that’s the sort of thing that we love.”

At the recent event in Nashville, it was Merker who introduced the Foto Sisters to the crowd of some 7,000 conference-goers. With lights flashing and a camera crane roving, Katie realized even 18 years of performing experience couldn’t keep her from having to talk herself out of a case of nerves. “It was like, ‘OK, Katie, where’s your focus? You have the opportunity to share about God’s sovereignty. You’re just a messenger, not the message.’”

And with that, she was steadied. The Foto Sisters entered stage right—holding it all loosely—and sang the song that could soon be coming to a worship service near us all.