Stranded in a pandemic

Hundreds of Americans are still stuck in Peru after coronavirus shutdowns

Americans board a United Airlines flight at a military base in Lima, Peru. Rachel Adams

Rachel Adams first heard about “the zombie virus” in February. Rumors in Huánuco, Peru, said it attacked neural pathways and caused people to walk after they were dead. Within a week the truth about the COVID-19 pandemic replaced the science fiction stories. The first cases of COVID-19 hit Peru in early March.

Adams, 23, arrived in Peru last August. She planned to spend a year volunteering at Casa del Buen Trato Hovde, “House of Good Treatment,” a shelter for teen mothers, sexual abuse victims, and domestic violence survivors. The shelter offers safe housing while providing job coaching, workplace safety classes, and interview practice. After seven months, Adams had started to get to know the women at the shelter. She was thankful for the real-life experience before pursuing a master’s degree in social work.

Adams left work on Friday, March 13, not knowing she wouldn’t return. She never had the chance to say goodbye to her co-workers or the women at the house.

At 8 p.m. on March 15, Peruvian President Martín Vizcarra announced the country would undergo a two-week lockdown beginning at midnight, giving people four hours to get home. Vizcarra closed Peru’s borders and shut down commercial airports. Thousands of foreign visitors had no way to get home. U.S. Ambassador to Peru Krishna Urs left the country on March 20.

Hours after President Vizcarra’s March 15 announcement, Adams tried to contact the U.S. Embassy. She couldn’t get through until a few days later. She wouldn’t be back on U.S. soil for another 23 days. More than 40 days after Peru’s shutdown, more than 500 more Americans are still stuck in the country.

The reported number of Americans stuck in Peru changes constantly. Original estimates said 1,600 Americans were stranded, but the U.S. State Department says more than 8,000 Americans have returned to the U.S. from Peru. A public Facebook group called “Americans Stuck in Peru” (with more than 5,600 members) is full of stories of travelers still waiting to come home. The Facebook page is also full of frustrated complaints about the U.S. Embassy in Lima and State Department’s handling of the situation.

Ainsley Katz, 24, lives in Washington, D.C. She and a few other volunteers organized the Facebook group and several WhatsApp messaging groups immediately after the shutdown. Katz started helping because her father was stuck in Peru. He’s since made it home safely, but Katz continues to spend six or seven hours a day communicating with embassy representatives and the Americans still stranded.

Carlos Ortiz arrived in Peru in early March to help build a school. When the Peruvian government announced all airports were closing, he bought a last minute flight to get home to Miami. But the flight was canceled, and Ortiz was stuck in Arequipa. He joined the WhatsApp group Katz and other volunteers had started. The volunteer-initiated group is where he and many others are getting updates on flight possibilities: “The embassy is no help,” he says. Ortiz’s aunt died on April 12. He doesn’t know when he’ll be able to return home: “My life is at a standstill right now.”

Nonprofit group Warrior Angels Rescue (WAR) is working to provide humanitarian flights from Peru to the U.S., but the group has been unable to get approval from the State Department. State is allowing flights by private companies Eastern Airlines and Solange Reps. Eastern flights cost upwards of $2,000, which some Americans are unable to afford.

WAR founder and President Valerie Edmondson Bolaños says State worked with WAR to organize three repatriation flights, but at the last minute “took over” the flights. (The State Department wouldn’t comment on the specifics of working with WAR but has said it’s still working to coordinate the Eastern and Solange Reps flights to the U.S.) Bolaños says her organization continued to work with State: “WAR was completely OK with being an invisible partner, except for the sloppy execution of these flights.” WAR gave the State Department its lists of passengers, but Bolaños says State left many behind. Hours before a domestic flight inside Peru to get Americans to the capital of Lima left, State changed the flight to a 17-hour bus ride. 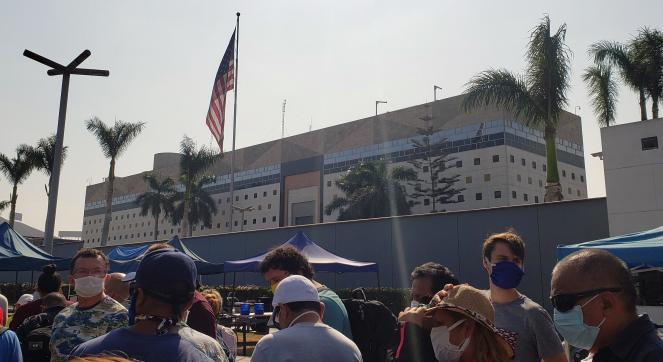 A line of Americans at the U.S. Embassy in Lima, Peru Rachel Adams

Americans stuck in Peru weren’t the only ones who were frustrated. On March 24, Sen. Marco Rubio R-Fla., tweeted: “#AmericansStuckInPeru is due to lack [of] urgency by some in mid-level of @StateDept. We didn’t need you to ‘track’ this, we needed you to solve this. This morning a competent official has taken direct control & will personally go to #Peru to get Americans home as soon as possible.” That official was Julie Chung, principal deputy assistant secretary in the Bureau of Western Hemisphere Affairs.

After Chung arrived in Peru on March 27, Rachel Adams says affairs seemed more organized. More Americans were able to get flights home, but Adams says the embassy focused its efforts on people in the larger cities of Lima and Cusco. Huánuco, where Adams was, is a nine-hour drive from Lima.

Adams and fellow volunteer Andrew Avram started calling anybody they could think of, including U.S. senators’ offices. A church friend had a connection who agreed to help them. “All we were told was that somebody named Carlos might call us,” Adams said.

Carlos Neuhaus did call. He’s the organizer for the Pan American Games and is friends with the director of transit of the Peruvian National Police, Jorge Lam. Lam had a connection with someone in the U.S. Embassy.

Peru’s commercial airports had already shut down, and all flights were going through a military base in Lima. Adams and Avram finally got on the embassy’s list for an April 5 flight. When their embassy representative realized they were in Huánuco, she called them back and asked them to remove their names from the flight list. She didn’t think they would make it in time.

To get from Huánuco to Lima in time, they needed to drive through the night over mountainous roads. Since the government had banned travel, Lam promised he would provide them with an escort.

Adams, Avram, and their Peruvian driver left Huánuco at 10 p.m. on Sunday, April 5. Less than an hour down the road, barricades prevented them from continuing. Peruvian police recorded their license plate number, searched the car with flashlights, and took photos. They inspected their paperwork and wrote down their passport information. Adams says they “felt somewhat like hostages.” After the inspection, a military escort accompanied them and helped speed up the process at checkpoints the rest of the way.

When they reached the U.S. Embassy, they waited another three hours before taking a bus to a military hangar. The U.S. Embassy required them to sign a promissory note agreeing to pay a still undetermined price for the flight home. The State Department is offering loans to help U.S. citizens pay for the flights, but Adams still doesn’t know how much her flight will cost. She’s heard reports of other passengers paying up to $5,000. Adams paid $400 for her previously scheduled flight home in July.

Social distancing was difficult to maintain while waiting in lines, sitting on a crowded bus, and boarding a plane. Adams wore gloves and a mask, but not all passengers did the same. Upon arriving at Dulles International Airport in Washington, D.C., she expected an “intense medical exam.” Instead, officials only asked passengers where they had been. No one checked passengers’ temperatures or screened them further. 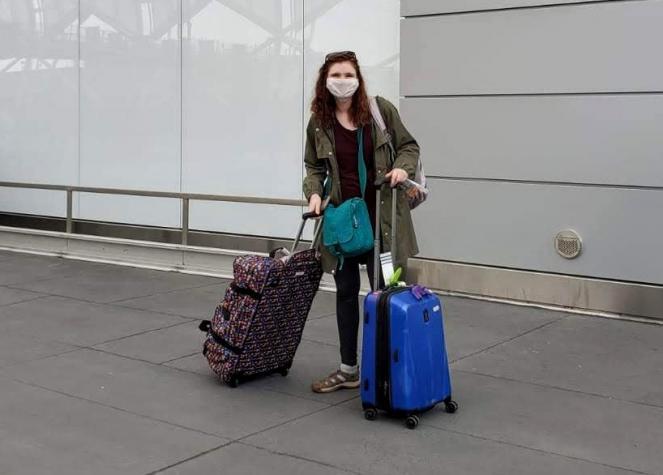 A line of Americans at the U.S. Embassy in Lima, Peru Rachel Adams

Adams spent the night in Dulles before boarding her flight home the next morning. She finally landed in Atlanta: “I had a hard time to not start sobbing and laughing. I just wanted to hug anybody I saw at the airport, but that wasn’t allowed!”

But Adams couldn’t quite go home yet. She self-quarantined in a guest-house for the next 14 days. Her parents lived a few minutes away and stopped by to drop off food and say hello through the window. She has since reunited with her family.