EVEN BEFORE THE PANDEMIC UPENDED THE WORLD, Kevin and Kristen Hamilton had their hands full. With four kids, including three with special needs, they struggled to find their footing in local schools in Somerset County, N.J. Andrew, a fifth grader, struggled with ADHD, and some school ­officials said his behavior hinted at autism. James, who spent his first four years of life in a Chinese orphanage, has bilateral limb differences and had academic and developmental delays. Emily, a pre-K student, has spina bifida, and like James joined the Hamilton family via adoption from China.

Then came COVID—and chaos. Kevin and Kristen both work from home. Trying to juggle all their children’s educational needs with their own work responsibilities proved impossible: “We literally couldn’t get anything done,” Kristen said.

Kevin and Kristen also realized that as Christians, a public school environment wasn’t working for their theater-loving oldest daughter, Gabrielle, an eighth grader. But where would they find a Christian school that could meet their laundry list of needs? Kristen searched online for nearby Christian schools, but none looked promising. Even if they did find one that could meet their children’s needs, would extra services mean extra fees?

Kristen’s brother, a Christian school administrator in Texas, cautioned her against getting her hopes up. Even if such a school existed, the Hamiltons probably wouldn’t be able to afford it, he said. 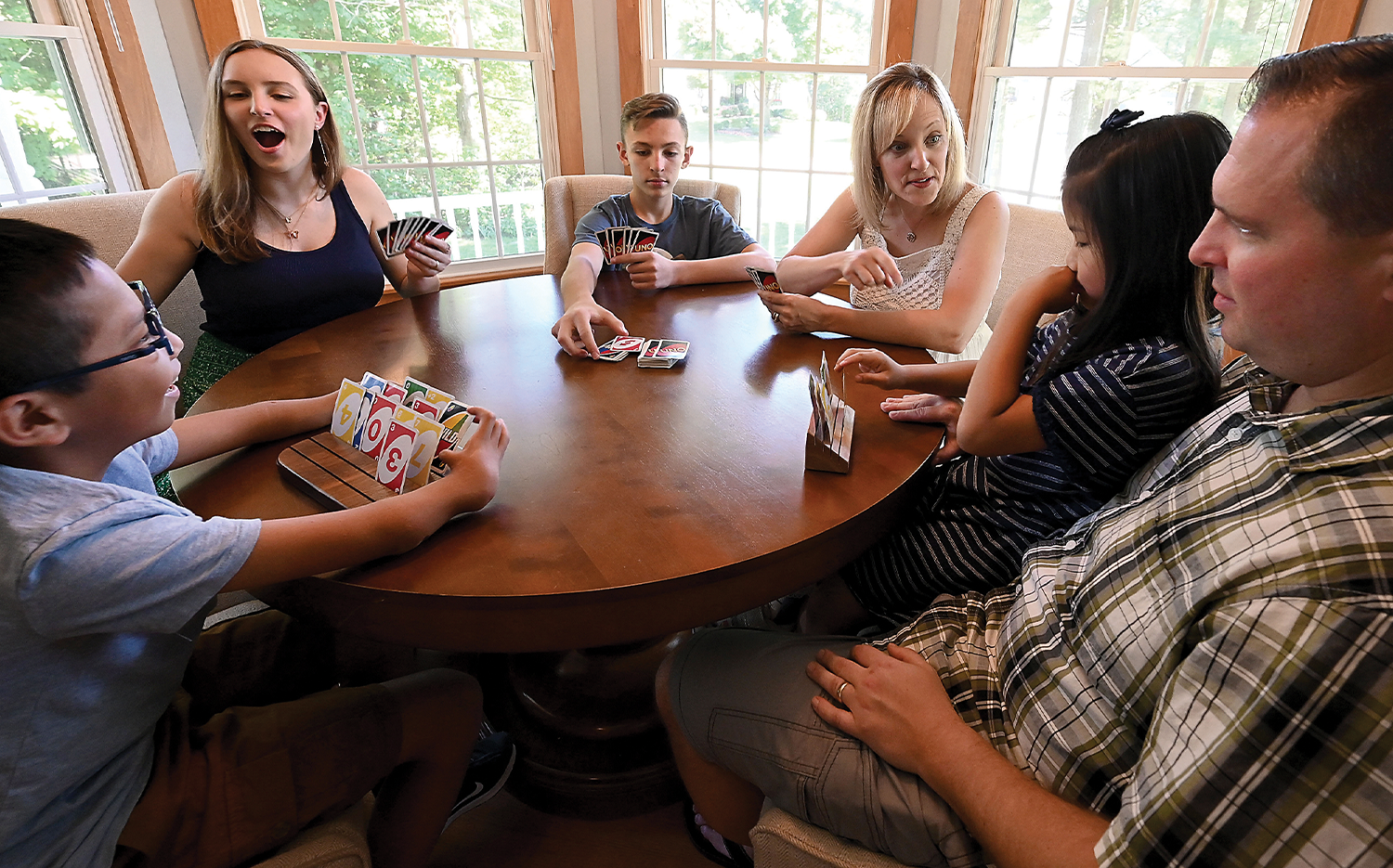 The Hamiltons enjoy a game of Uno. Dale G. Young/Genesis

The demand for Christian special education is growing, but there’s still a long way to go if Christian schools are to catch up with public ones. Around 14 percent of public school students have disabilities, and by law, all public schools must offer special education programming. A March 2020 Association of Christian Schools International (ACSI) survey found that only about 1 in 3 of its member schools offered special education services or programs. Of those that did, students with special needs made up just 7 percent of the school population, on average. But a few pioneering Christian schools are paving the way for others to stretch their learning limits.

Before President Gerald Ford signed the Education for All Handicapped Children Act in 1975, U.S. schools didn’t always have a place for ­students with ­disabilities. But some Christian schools valued students with special needs even before the federal government insisted on it. Christian Reformed Church Pastor William Masselink and his wife, Mary, started Elim Christian School—then the Chicago Christian School for Handicapped Children—in 1948. Their son, Paul, had Down ­syndrome. Only four people in the Masselinks’ entire denomination had special education qualifications at that time.

The school now has 198 students. Many of them have multiple disabilities and often come with referrals—and tuition payments—from their local school districts due to their complicated needs.

But that reliance on public funds hasn’t com­promised the school’s Christian focus. “We want children taught from the perspective that God is sovereign, that He has a purpose and a plan for each of us,” said Dan Vander Plaats, Elim’s director of advancement. “We believe that people with and without disabilities have a purpose and a place in God’s kingdom.”

In 1979, a group of Michigan parents pursued a similar vision, founding the Christian Learning Center to help equip Christian schools to meet the needs of all students, including students with disabilities. Now known as All Belong Center for Inclusive Education, the organization offers con­sultations, evaluations by school psychologists, ­professional development, and other resources. Last year it added school social workers to help address social-emotional support. With about 90 members in 11 states, membership has grown by 30 percent annually the last two years, said Executive Director Elizabeth Lucas Dombrowski.

Some Christian schools try to emulate the ­public school approach to special education. But Dombrowski said it works better to build a unique system around the needs of current or incoming ­students. “Our Christian schools are not going to look like public schools,” she said. “That’s not what we’re trying to go for in any other aspects of our education.”

That’s not what the Hamilton family was going for, either. In early September 2020, a mom Kristen met through a Facebook group contacted her with a ­possible solution for their family’s needs. Would the Hamiltons consider a school in Michigan? Kristen was skeptical about moving her family more than 700 miles just to be near a particular school. But she looked up the website anyway and thought, this school “feels sort of like a unicorn.”

Zeeland Christian School, founded in 1915 in Zeeland, Mich., serves about 1,000 children from pre-K to 8th grade. It first began implementing inclusive education in 1989. Stacy Deters, the school’s director of support services, said its support staff now works with about 60 students in a typical week. While the school doesn’t turn away students solely because of their needs, Deters said administrators do consider their current student population and whether the class in question has room for another child with extra needs.

Deters said Zeeland’s special needs students ­represent an array of conditions: Down syndrome, spina bifida, cerebral palsy, ADHD, and autism. Since COVID, an increasing number suffer from anxiety. Some are nonverbal, and two use assistive technology to communicate. Due to families adopting or fostering, some students are also dealing with trauma or conditions like fetal alcohol syndrome.

A 2014 paper in the Journal of Catholic Education found that funding is the biggest obstacle for Christian schools that want to educate students with varying needs. Zeeland makes it work with a creative mix of tuition, government funding, and fundraising. Special education services make up about 10 percent of the school’s budget, or around $700,000. Administrators factor that into the per-student tuition—about $7,500 per year—and spread the cost across the student body.

Head of School Tim McAboy sees sharing the cost as a natural fit for a Christian school. When he interviewed for the job in 2017, he’d never heard of inclusive education. At first he saw Zeeland’s focus on special needs as a benefit for students with disabilities. But he soon realized the spiritual benefits for himself and his own family. “It’s the body of Christ—we are incomplete without one another,” he said. “It should not be any other way.”

A 2019 survey by ACSI bears that out: Alumni of Christian schools that include students with ­disabilities are almost twice as likely to continue in their faith as adults.

Zeeland employs seven salaried teachers with special education backgrounds and 20 part-time assistants. The assistants are generally assigned to classrooms instead of individual students, to help allow the students to be as independent as possible. Each student has a home base in a regular classroom, but students with extra needs have access to a support classroom for sensory breaks or extra lessons. Two speech therapists who work for the local public school district spend most of their time each week at Zeeland.

In late September, all six Hamiltons traveled to Michigan to visit Zeeland. In the school’s classrooms and hallways, Kristen noticed adaptive equipment she usually saw in therapy offices. Kristen said she and Kevin typically make more calculated decisions. But this time? “We took a leap,” she said. They enrolled their children at Zeeland and called a ­moving company.

As with the Hamiltons, it took a journey for Annapolis Area Christian School superintendent Rick Kempton to convince his staff to embrace inclusive education. When he first raised the idea back in 2015, he faced immediate pushback from several longtime staff members. The school in Annapolis, Md., traditionally focused on college preparation and required incoming students to pass an admissions test. Opening admission to just anyone, especially students with special needs, would radically change the school’s culture. But Kempton refused to give up. He chose a few key opponents to travel with him and the school principals to visit All Belong and some of its nearby member schools.

After their two-day tour, Kempton and his staff members returned to the airport to fly home. Sitting in the departure lounge, Kempton took a deep breath and asked the question he’d nervously pondered the whole trip. Did the visit change anyone’s mind? “It was unanimous,” Kempton said. Everyone was ready to welcome students with special needs.

Last year, the school served students with autism, learning disabilities, communication and language needs, and ADHD. A student who has Down syndrome is enrolled for this fall. About 10 students are currently on the waiting list. While the school still serves college-bound students, a placement test has replaced the previous admissions test.

It took several weeks for Kevin and Kristen Hamilton to move their family of six from New Jersey to Michigan. But by November 2020, the kids were ready to start in-person school again. COVID-19 restrictions kept most parents off campus, but administrators at Zeeland Christian School made an exception for the Hamiltons’ first day. It was still dark when they arrived that morning. When they walked in, Kristen heard praise music playing in the hallways and saw teachers greeting students at the door with fist-bumps and high-fives. At other schools, it had seemed like educators saw her family as a hassle. At Zeeland, “we just felt so welcomed,” she said, even with all their extra needs.

When James’ classmates learned how to play recorders in music class, his teacher talked with ­colleagues to figure out an alternative. Instead of the recorder, James played a melodica. It allowed him to participate without having to grip something tightly or fatigue his arms.

When doctors diagnosed Andrew with level 1 autism in fall 2021, Kristen didn’t worry about telling teachers and administrators. “It’s another part of who Andrew is, and we love him,” Andrew’s teacher told the family.

McAboy, the head of school, said when other school leaders ask for advice, he encourages them to start where they are. “Move forward with one family, with one student, and figure it out as you go, and before you know it, you’ll be doing it,” he said. “Stepping out in faith means that we’re not going to have it completely figured out before we start, that there’ll be difficult days, that it’ll be complicated. But it’s worth it. The children are worth it. … Our community’s worth it.”