Big players in the aerospace and technology sectors are now major investors in a radically new approach to launching small payloads into outer space: space catapult.

SpinLaunch Inc., a Silicon Valley startup founded in 2014, recently announced it had raised $40 million, in part from venture capital firms affiliated with Airbus and Google.

“We are very intrigued by SpinLaunch’s innovative use of rotational kinetic energy to revolutionize the smallsat market,” said Wen Hsieh, a general partner at Kleiner Perkins Caufield & Byers, another investor, according to Bloomberg Businessweek.

Since the dawn of space flight, large booster rockets have been the only way to launch payloads into orbit. SpinLaunch would use an electromagnetically powered centrifuge to accelerate a small rocket containing a payload to speeds approaching 5,000 miles per hour. The launcher would then release the rocket, allowing its momentum to carry it into orbit.

Catapulting a payload into orbit could be more efficient than using conventional rocket boosters, which require large amounts of fuel. In a conventional rocket launch, typical payloads constitute less than 5 percent of the launch vehicle’s total mass. A catapult system could radically lower the cost per launch.

“SpinLaunch is targeting a per launch price of less than $500,000,” founder Jonathan Yaney told technology website Techcrunch. “All existing rocket-based companies cost between $5 million and $100 million per launch.”

Yaney claims the “core technology has been developed, prototyped, [and] tested,” and says the major challenges will be scaling up and constructing the launch systems.

Some physicists have cautioned that a potential challenge will be overcoming the resistance of the atmosphere once the catapult launches its payload. Still, some aerospace experts unaffiliated with the project have come away impressed. 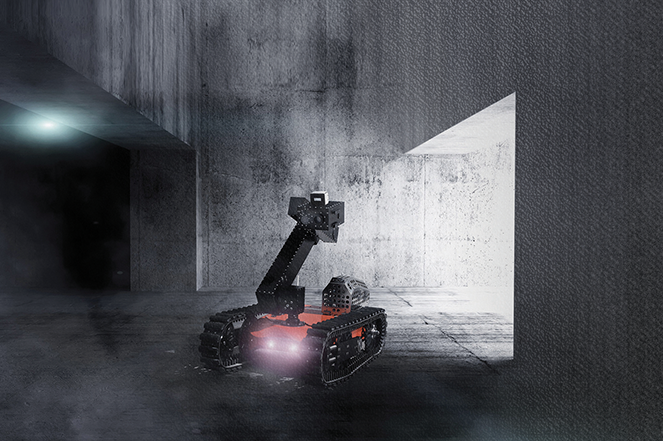 Robotic firefighting technology could soon make one of the world’s most dangerous jobs a bit safer. In two separate research projects unveiled last month, scientists showcased a track-mounted robot that can navigate smoke-filled environments to assist fire rescue teams, as well as a robotic fire hose that can fly through burning buildings to extinguish fires.

SmokeBot, developed by a team at Sweden’s Örebro University, uses gas sensors, radar, a laser scanner, and a thermal camera to see through smoke and dust, detect gas leaks, and plot maps of the areas through which it navigates.

The robot’s developers worked closely with rescue units in Dortmund, Germany, where SmokeBot functioned as “eyes” for rescue teams, leading them in search and rescue operations.

Researchers from Tohoku University and the National Institute of Technology in Japan recently demonstrated their own firefighting invention, a snakelike robotic fire hose that can maneuver through windows and other gaps in a structure.

The 6.5-foot prototype contains sets of steerable nozzles along its side that fire high-pressure jets of water downward, allowing it to “fly” through a building. The “head” module has more freedom of movement and can direct the main water stream more precisely, according to IEEE Spectrum. The researchers envision a system where multiple robotic segments could be connected to extend the hose’s length as needed. —M.C.