Sobering centers are a new model to help cities handle public intoxication and provide addicts with treatment opportunities, yet some worry they may enable bad behavior

In 2014, Brian Sakaluk was homeless in Houston, addicted to alcohol, marijuana, and cocaine. Though Sakaluk grew up in a Roman Catholic family, he smoked cigarettes with friends as a preteen and then tried alcohol and drugs. As an adult he missed work due to hangovers and was fired from multiple jobs. He spent several nights in the county jail for public intoxication and eventually ended up sleeping under a bridge.

One day in June 2014, police took an intoxicated Sakaluk to the Houston Recovery Center’s “sobering center,” a medical facility where individuals can safely sleep off the inebriation of alcohol. After a Breathalyzer test and a few hours of sleep, Sakaluk was sober. The staff gave him a choice: leave or go into recovery.

“I was just tired of that lifestyle,” says Sakaluk. He chose recovery.

He entered and completed a Salvation Army recovery program but relapsed two years later. At Open Door Mission, a Christian rehab center in Houston, he got sober and took a job maintaining the ministry’s air conditioning and refrigerator. Now Sakaluk, three years sober, looks back at that night in the Houston sobering center as a turning point.

Houston has one of the nation’s 40 sobering centers. Some focus on specific substances, while others accept people intoxicated from anything. The centers relieve the burden on emergency medical personnel and police officers and provide second chances for those struggling with addiction. But some people fear removing consequences could make addicts less likely to change.

Austin, Texas, opened its sobering center in 2018. Ambulances and police drop off intoxicated individuals, and paramedics examine them for medical needs. Staff members bring each client to a dorm with green cots for them to sleep on until sober. Behind a one-way mirror, a paramedic keeps an eye on clients, who typically stay four to six hours. When sober, each client must answer a questionnaire about his or her drinking habits. Staff members recommend local recovery programs and then let the person go. No bills. No arrest record. No limit to how many visits a person can make.

County Judge Nancy Hohengarten was instrumental in bringing the model to Austin. After seeing countless people charged with misdemeanors for public intoxication, she told Community Impact Newspaper she’d realized incarceration was “largely ineffective” as a method of persuasion.

Since opening, the center has seen more than 3,500 clients. The city funds the center at about $1.8 million a year, according to the Austin American-Statesman. 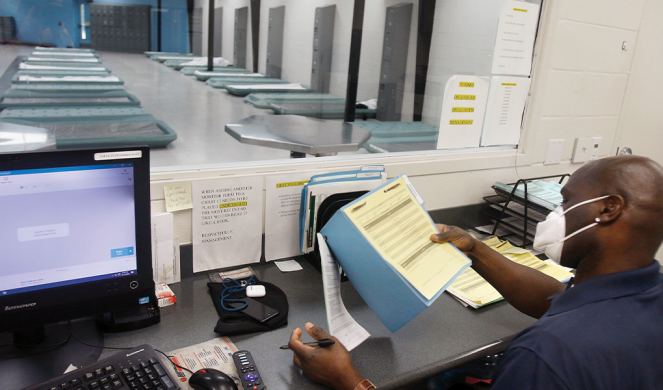 Alfred Jones has a view of the client area at Houston Recovery Center as he processes paperwork in the office. Johnny Hanson/Genesis

Besides allowing intoxicated clients to avoid arrest records and hospital bills, sobering centers give them a chance to start recovery. At San Antonio’s sobering center, staff aim to get 10 percent of clients to enter recovery. At Austin’s center, a review found that 51 of the 1,605 clients, slightly more than 3 percent, subsequently entered treatment. Repeat clients were more likely to agree to rehab, including one person who entered treatment after the 14th visit. (In San Antonio, one client has visited 700 times and said no to recovery every time.)

In both centers, most repeat clients are homeless. With nowhere else to go, homeless people who are publicly intoxicated often end up in jail or in a sobering center. Seeing the same people repeatedly can get discouraging, but David Pan, who leads San Antonio’s center, remembers one man who got sober after 30 years of heroin addiction. “Finally he just reached the point where he was ready,” said Pan. “You have to believe people can change.”

However, Mark Shaw, founder of the Addiction Connection, a network of Biblical counselors and ministries helping addicts, worries sobering centers could discourage accountability. “The truth is most addicts do not seek further help without some type of pressure from outside,” he said. “No consequences for the addict probably encourages more irresponsible behavior.”

Still, Shaw affirmed that sobering centers could do good by preserving people’s lives through dangerous circumstances and providing chances for change: “It is not a solution, but it does create … an opportunity for hope.”