If you’re over the age of 21 and don’t happen to have a job tracking pop-culture trends, you may have missed the latest musical craze: sea shanties.

After a young Scotsman shared a TikTok video of himself singing a 19th-century whaling song titled “Wel­lerman,” the internet went wild. His post racked up millions of views and spawned hundreds of sub-videos featuring fans from all walks of life (including Elon Musk, Jimmy Fallon, and Andrew Lloyd Webber) adding their voices to the original. Others dug up more sailing songs from eras past and shared them across the social media spectrum. A group called the Longest Johns even hit the U.K. Top 40 charts with its version of “Wellerman.”

While I’m not much of a singer, I do have one contribution I can make—a movie recommendation.

The 2019 British indie Fisherman’s Friends (available on most streaming platforms) tells the true story of a group of Cornishmen who catch lobsters by day and sing shanties to tourists by night. It’s all an amateur lark until some big-shot music executives take a holiday in their seaside village of Port Isaac. The boss of the group of vacationers commands his best deal-maker, Danny (Daniel Mays), to sign the singing sailormen to a deal posthaste. There’s just one problem: The old gents aren’t particularly interested in stardom. 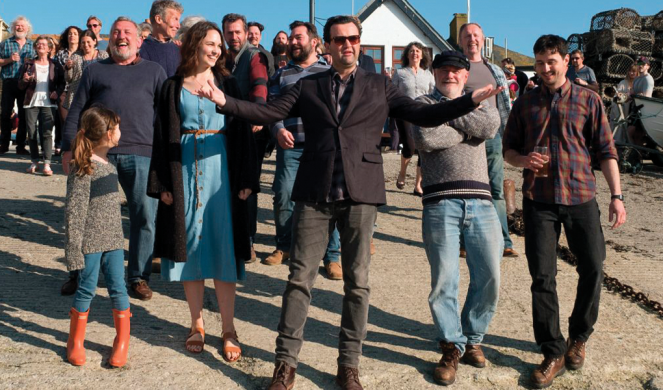 Warmhearted, with something of a Hallmark vibe, Fisherman’s Friends is not a pick for cynics, but that doesn’t mean it has nothing of substance to say. At one point when Danny calls his London office, we hear a pop hit playing in the background. The soulless, mass-manufactured sound, complete with obscene rap lyrics, contrasts sharply with the authenticity of the shanties and the church recording studio where, a local reveals, the men learned to sing.

That’s not to say the friends are choirboys. We are talking about sailors here, so a bit of salty PG-13 language and a couple of coarse jokes pass between them. Likewise, it’s a shame that Danny and his love interest spend the night together, though this is only implied in a morning-after scene—there’s no sex or nudity on-screen.

Fisherman’s Friends offers the same thing I’d guess is drawing so many to the shanty craze right now. As I watched the many online videos of folks from all different backgrounds layering their voices to sing together, I saw a rebuke of the forces that work so hard each day to sow enmity and division. I saw people eager to enjoy rather than ridicule the past. I saw people starving for community, hungry to tear down barriers to cultural exchange. Most of all, I saw people tired of anger and isolation and ready for a good, old-fashioned singalong.