Silence of the sheep

Christian nonprofits and churches have adopted practices from the for-profit world of avoiding liability, sometimes leading to devastating outcomes

When staff members join Christ the King Community Church in Burlington, Wash., one of the largest churches in the United States, they sign onto the employee handbook, which has a tightly defined confidentiality clause. By signing, staffers agree never to discuss information “designated as confidential” such as “sensitive information regarding members” or donation records or discipline issues. The handbook is publicly available.

NDAs appear to have started as a way to protect trade secrets in the tech industry in the mid-20th century, according to a Columbia Journalism Review history of the term, but companies quickly began using them to protect all sorts of information. NDAs were the reason the Harvey Weinstein scandals remained secret, because women signed confidentiality agreements as a condition of their settlements. And this practice from corporate America is now common among religious nonprofits.

Done right, confidentiality agreements help institutions protect members’ privacy and can fend off ruinous litigation. But NDAs can also mask institutional disease and leader misconduct. And even when an institution doesn’t enforce its NDA, the widespread institutional fear of liability can lead to unintended, devastating outcomes.

One employee at a Christian radio station showed me his non-disclosure agreement, which included a clause forbidding him from communicating “any information of any kind” relating to the radio station regardless of whether it is deemed confidential or important. The agreement also included a non-compete clause (see sidebar below) forbidding him from working for another station within 30 miles during his employment and for six months after.

Open Doors USA used an NDA as a condition of three months’ severance for one of its employees, according to a document WORLD received. The NDA required the employee to promise not to make civil claims against the organization and included a non-disparagement clause forbidding both the employer and employee from making disparaging comments “verbally or in writing, or mak[ing] any statements to the press or to any third party.” The agreement also forbade disclosing the existence of the agreement.

The employee signing the agreement felt little choice in the matter: “If I didn’t accept the agreement, we wouldn’t have been able to pay our bills.” Open Doors declined to comment on its NDA policy.

Even some employment lawyers who make a living off such agreements think the religious nonprofit world needs to weigh how they are used. Ed Sullivan is an employment lawyer and Catholic, and practices both in Houston. He has drawn up thousands of confidentiality agreements for companies.

“If you didn’t have confidentiality in settlements of lawsuits, you would have a non-functioning legal system in the United States,” said Sullivan. He explained that litigation is so expensive—estimating $50,000 on the low end for any sort of employment case, with cases often stretching into the six figures—that private settlements are the only way companies can stay in business without fielding infinite cases brought against them. In other words, if small settlements are public, it gives employees an incentive to sue, even if most of those settlements are for meritless claims that the company simply does not want to spend money litigating.

“But religious institutions—they’re different,” said Sullivan, who has watched what has happened in his church, as settlements have drained the church of billions of dollars. The diocese of Rochester, N.Y., filed for bankruptcy in September after the state approved a one-year look-back for abuse cases that may have passed the statute of limitations. “These [abuse] lawsuits strike to the core of who they are as an institution. … It’d be better for the institution in the long run” to make settlements public.

One night last year, Sullivan was sitting on his porch smoking a cigar and just “got mad” thinking about the Catholic abuse cases. In a pique, he wrote a letter to Cardinal Daniel DiNardo, the head of the U.S. Conference of Catholic Bishops, urging him to ban confidentiality agreements in abuse cases, unless the victim requested it.

Every settlement, he wrote, must be public and put on the USCCB website with the name of the offending clergyman, the amount of the settlement, and the date of the allegation. He thinks if the amount is published, reasonable people will be able to distinguish how serious the case was.

“If the [Cardinal Theodore] McCarrick settlements were disclosed to the public, then it is inconceivable that he would have been elevated to the position of cardinal or remained in the priesthood,” Sullivan wrote DiNardo. “It is no longer in the best interest of the church to hide her dirty laundry.”

The USCCB officially banned confidentiality agreements in abuse settlements in 2002, but Sullivan felt the original language of the ban could be manipulated to make the ban seem “discretionary.” And post-2002, dioceses have still left some settlements undisclosed, like some of the McCarrick cases. When I asked the spokesperson for the USCCB about this, he said I would have to ask individual dioceses for an explanation. The current version of the ban is more tightly written.

Such liability problems are now slamming evangelical churches. A devastating Houston Chronicle investigation this year unveiled more than 700 victims of sexual misconduct in Southern Baptist churches over the last 20 years and showed how abusers went freely from church to church.

“We know of churches and institutions that have written policies never to disclose the reason for a termination to anyone seeking a job reference,” Ben Wright, a Cedar Park–based pastor and an official with the Southern Baptists of Texas Convention, told the Chronicle. “The sole purpose of these policies is to minimize exposure to civil liability. But we are not ordinary businesses. We believe that it rests on us a moral obligation that demands more.”

In response to the Chronicle’s revelations, Texas passed a law (composed with the help of the Southern Baptist Ethics & Religious Liberty Commission) allowing nonprofits to disclose accusations of sexual misconduct of former employees or volunteers in “good faith” to current or prospective employers without fear of liability.

Someone who makes a bad faith or malicious accusation does not have protection from civil or criminal liability. In other words, if you intentionally slander someone, you could be criminally charged or civilly liable. Sullivan thought those were good safeguards: “Granting immunity from civil liability should be rarely done, and when it is done it should never be absolute, because that only serves to encourage reckless behavior.”

The Texas law only shields organizations in Texas. An employee reference from out of state, responding to a Texas church’s call, would not have the legal protection to share such information. 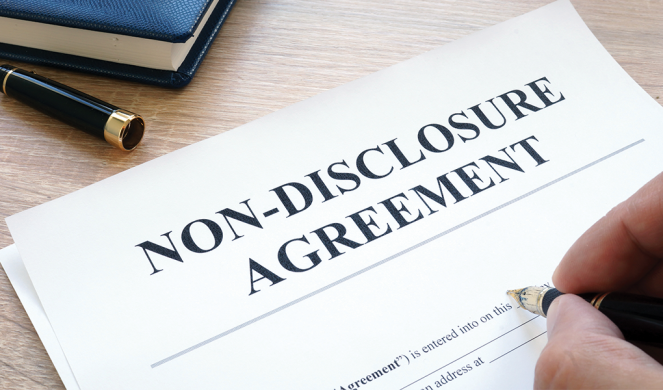 ‘These [abuse] lawsuits strike to the core of who they are as an institution. … It’d be better for the institution in the long run’ to make settlements public. —Ed Sullivan iStock

THE SAME CULTURE OF CONFIDENTIALITY in churches about staff issues may have helped an alleged predator in South Carolina slink from one church to another. This instance underlined how difficult it is for ministries to prevent abuse when there is no criminal history to check and little information sharing between organizations because of fear of liability.

NewSpring Church, part of the Southern Baptist Convention, is one of the fastest-growing churches in the country with 15 campuses across South Carolina and about 23,000 in weekly attendance. It’s now facing lawsuits regarding its vetting of volunteer Jacop Hazlett, who worked in the church’s children’s ministry where he allegedly sexually abused children. South Carolina police say they have now identified 15 alleged victims of Hazlett, although it’s unclear if all of those victims are from NewSpring.

NewSpring said he passed the criminal background check that the church ran on him, as well as an in-person interview. The lawsuits say Cove Church and Elevation Church in North Carolina had turned him out of their children’s ministries out of concern for his behavior. Since 2016, NewSpring has had three other men accused of sexual misconduct with children.

Neither NewSpring, Elevation, nor Cove Church responded to requests for comment on the Hazlett case. Though NDAs don’t appear to have played a role in this case involving a volunteer, NewSpring uses NDAs, and Elevation also uses NDAs for staff and volunteers.

NewSpring’s spokesperson Suzanne Swift initially had told WORLD that the church does not use NDAs, but a former employee sent a copy of a NewSpring NDA he was required to sign as a condition of receiving severance. This particular agreement mentions Swift by name.

Asked about the discrepancy, Swift wrote back saying, “We don’t require staff to sign a specific NDA,” but said employees when they join must sign the employee handbook that includes “the expectation of confidentiality in some situations.”

The former employee said he was presented with the NDA and severance agreement two days before the end of the month, when his family’s health insurance would expire, so he felt he had no choice but to sign. The NewSpring NDA included a non-disparagement clause, that he would not disparage or “complain about” church staff and church members.

In his letter to Cardinal DiNardo about ending confidential settlements, Sullivan concluded: “If you wish the public to once again hold priests in high esteem, then dioceses should start by being 100 percent transparent with the public and 100 percent committed to letting justice prevail.”

Non-compete clauses, forbidding staff from going to work for other churches or ministries in the area, seem to be a particular sign of ill-health in a Christian organization. Former megachurch Mars Hill Church had required pastors to sign non-compete forms. Harvest Bible Chapel had a non-compete agreement for pastors, forbidding them from being part of another “church ministry” within 50 miles of any Harvest campus.

Willow Creek Community Church said in a statement that it had used NDAs and non-compete agreements “on occasion” in the past, but that such agreements were no longer a practice to use for staff or congregants: “We believe in the local church and want the church, at large, to thrive. We know God calls people to different congregations at different times and we support staff who transition to lead and serve elsewhere.”

WORLD repeatedly contacted the 25 largest megachurches in the country about their use of non-compete clauses; a few agreed to respond. Many reported that they do not use non-competes, but self-reporting on such policies is difficult to assess because churches might have a small non-compete clause slipped into a larger contract or particular severance agreement.

“We believe that our competition is not other churches, but rather the world, the flesh, and the devil,” said Saddleback Pastor Rick Warren. “Our philosophy has always been that we want as many churches as possible in our area, because no single church could possibly appeal to and reach everybody.” —E.B., with reporting from Alyssa Jackson