Weighing the hidden costs of the cruise industry shutdown

Cruise ships are docked at the Port of Miami in May as the cruise line industry waited to resume operations. Joe Raedle/Getty Images

Jerry Kaye’s Miami-based company, Lucite Creations, makes signs for cruise ships. Only cruise line employees see his back-of-house signs outlining proper sanitation or food service procedures. Likewise, only a search helicopter would see the reflective insignia on top of a lifeboat canopy, identifying the lifeboat number and the ship it came from.

Eighty-year-old Kaye, who retired in 2009 from his main job as a high-school industrial arts teacher, started his side business in 1976 by making plastic souvenir key tags to sell on a Carnival cruise ship. A few years later, he got a rush request for signs needed in food service areas to satisfy public health inspection requirements. He and his wife completed the order by hand in his garage. “I grew with the cruise lines,” said Kaye.

He was still happily fulfilling orders in March 2020 when the pandemic hit and U.S. officials ordered cruise ships to stay in harbor. His company then endured 14 months of almost no revenue. “Maybe a lawn sign,” he said. “The only thing that saved us was the Paycheck Protection [Program] and an SBA loan.”

The pandemic’s halt to cruise travel left many businesses tied to the industry also dead in the water. In 2020, cruise giants like Carnival, Royal Caribbean, and Norwegian, all headquartered in Miami, saw their annual revenues plunge by billions of dollars. Losses for small businesses that supply the industry may have fewer digits, but they heavily impacted jobs and families. Work—and revenue—is only now picking up again. 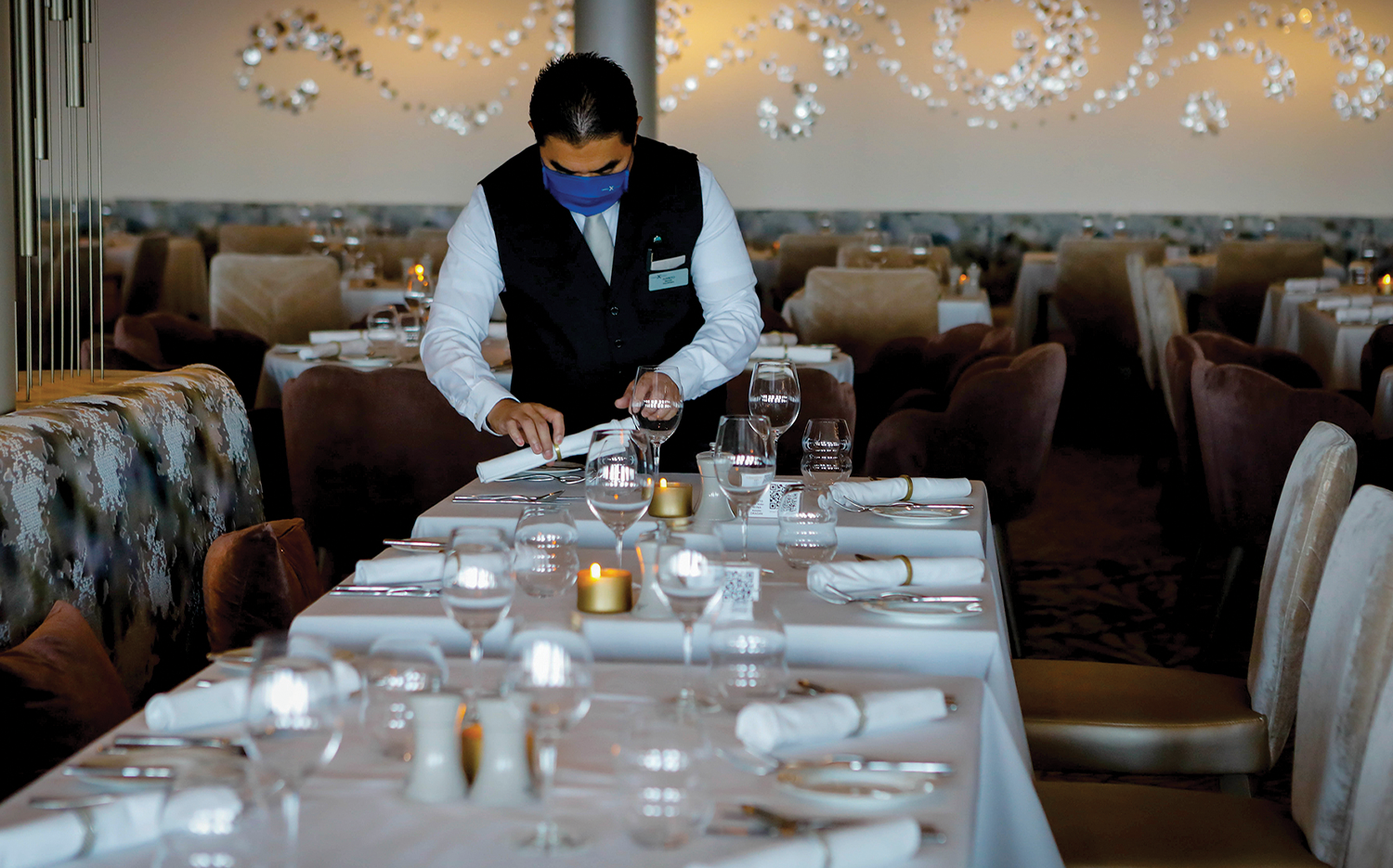 An employee sets a table at the Cosmopolitan Restaurant on the Celebrity Edge cruise ship, the first revenue-earning cruise to depart from the U.S. after the pandemic-induced hiatus. Eva Marie Uzcategui/Bloomberg via Getty Images

Omar Otero, 59, a former deputy sheriff in Broward County, runs VOK Protective Services. VOK workers escort cruise ship crew members whose contracts have been terminated, ensuring their secure departure from the United States and repatriation to their home countries. If someone “jumps ship,” VOK might help track down the individual or pick him up from jail. The company also helps with medical logistics for passengers: Before the pandemic, Otero had as many as 10 nurses available for dispatch anywhere in the world.

At his pre-pandemic peak, Otero kept about 75 workers busy. But now, following the cruise industry shutdown, he’s down to about 35 workers, relying on local security contracts. He said he’s lost 95 percent of his gross income. “We’re making ends meet, but we’re still struggling,” he said. His fixed expenses remain: “In my type of business [as a security professional], I can’t let my licenses expire.”

Those arguably most impacted by the cruise shutdown, though, are crew members themselves. Drawn from around the world, they often seek maritime work due to limited economic prospects in their home countries. Crew members’ pay can be five times what they might otherwise make back home.

The trade-off is a grueling work schedule: Contracts last seven to nine months, with most employees working nonstop for 11-12 hours daily, seven days a week. “It’s a challenging lifestyle that I don’t think many Americans can appreciate,” said the Rev. Mark Wodka, director of Canaveral Port Ministry. “If they did, they might leave bigger tips.”

In March 2020, crew members’ situations deteriorated from difficult to desperate: Many were stuck on ships, initially getting room and board with half pay, then “a few weeks later, it became room and board and no pay,” said Wodka. Isolated from fellow crew members due to onboard quarantines, some even committed suicide. In response, Canaveral Port Ministry created an anti-suicide video, circulating it on social media. “It was hard to be here watching what was happening in the other parts of the world,” Wodka said. “You just felt so helpless.”

Finally, in late June 2021, cruise lines began to resume service to U.S. ports, navigating a thicket of federal health guidelines and Florida laws. As crews returned to South Florida, Otero had gotten a couple of transportation contracts but said it was a small fraction of his prior work.

Kaye’s business, on the other hand, was brisk—in addition to himself and his son during the day, he had a two-person crew working nights. COVID-related sanitation protocols require signage that is right up Kaye’s alley: He was creating thousands of two-sided plastic disks to mark tables as “clean” or “dirty.”

As for cruise ship crew members, most remain in limbo, according to Pastor Vasiley Udolkin, assistant chaplain with the International Seafarers Ministry in the Port of Miami. Udolkin communicates with many crew members around the world via WhatsApp. “If we have hundreds of conversations a week, only a few have been able to pick up work,” he said. “The rest are still waiting.”