Silence greeted Adam Thomas as he entered the garage office designated as the “bee room.” Uncovering his indoor beehive, he saw a group of still, black bodies blocking the opening to the hive’s feeder. All dead. He grabbed a magnifying glass and puzzled over the heap of bees. Naturally tidy creatures, bees carry their dead out of the hive, and it appeared a mass funeral exodus had clogged access to the feeder. Once a certain number of bees die, the entire hive is lost.

Thomas hurried out of the garage to tell his wife, Kristel. She and their four children were building an igloo in the front yard—an unexpected sight in southern Arkansas. The cold snap that hit the Deep South in mid-February blanketed the Thomas family’s yard in 10 inches of snow. Crunching through the still-falling snow toward his family, Thomas called out, “I think my hive’s done.”

Thomas is one of about 120,000 Americans who keep beehives, a hobby that’s growing in popularity, according to Matt Ross of the Illinois-based Dadant & Sons. Ross, the seventh generation to run the beekeeping supply company, said today beekeeping is part of “the whole backyard movement,” as families use their backyards for more than just a swing set. Behind the Thomases’ house, a hen coop and raised vegetable garden stand within sight of the outdoor hives, as the clucking of hens mingles with the hum of the bees.

Thomas’ own beekeeping venture began four years ago. He felt a desire to “produce something” that would fit within his budget and time constraints as pastor of Wyatt Baptist Church in El Dorado, Ark. He purchased his first outdoor hive in 2017. Yellowish-green and about 3 feet tall, it resembles a filing cabinet. Thomas has since added three more, populating one with wild-caught bees he trapped behind the church, populating another by persuading his mother to invest in a box and hive “nuc” (a queen and small colony of bees): Mom gets half the honey. 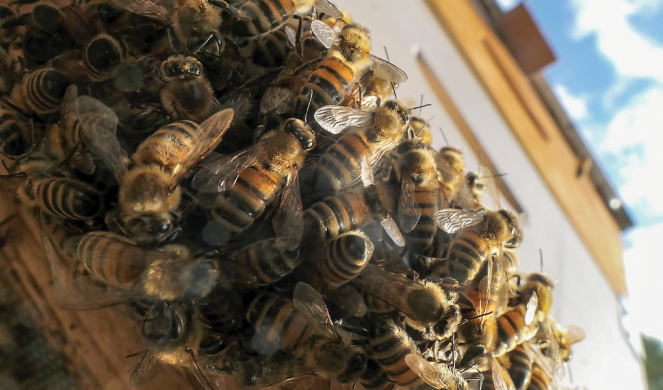 Thomas named his small apiary “Shepherd’s Gold,” a reflection of his role as a pastor. Keeping bees also requires a shepherd’s care: Invasive beetles are a constant threat, and in the spring he watches carefully for “swarming,” the bees’ tendency to leave the growing hive in search of more room. If he can entice a number of bees to settle with a queen in one of his traps, he could sell the nuc and invest the money back into his own hives and supplies.

The four outdoor hives stand on homemade wooden platforms at the back of the family’s property on the outskirts of town. Oak and pine trees rise 30 feet into the sky behind the boxes, slim and straight. The outdoor hives survived the cold weather, but mysteriously his indoor one—built so Thomas could conveniently watch bees and learn more about how they thrive—did not. Despite this failure, Thomas is already considering how to recolonize the observation hive.

A week after the snowstorm, temperatures reached the upper 70s. Piles of dirty snow stood in heaps along the roads, and the igloo that all six Thomases had squeezed into now resembled a miniature ice sculpture of Stonehenge. The outdoor hives were audibly awake, and a few bees danced and warmed themselves in the sun, unharmed by the week of freezing weather and precipitation.

Now, the trees down the road at Paul’s Mayhaw Orchard are bursting into white blooms. The bees will be the orchard’s first customers. Local residents will collect the mayhaw’s red berries in May to make into a pale pink jelly, but Thomas and his family will collect their first batch of “Shepherd’s Gold” in early June—the golden honey their bees produce from the nectar of the mayhaw blossoms.

Julie Spencer Julie is a graduate of the World Journalism Institute midcareer course.
COMMENT BELOW

Cool! I always liked bee hives. Maybe I should get one. Just thinking.