As Congress prepared to tally Electoral College votes on Capitol Hill on Wednesday, Democrats in Georgia declared victory in two Senate runoff elections that would deliver the Democratic Party a coveted trifecta: control of the presidency, the U.S. Senate, and the U.S. House of Representatives.

Neither Loeffler nor Perdue had conceded, and early Wednesday, The Atlanta-Journal Constitution reported that Ossoff’s race remained too close to call. But by Wednesday afternoon, Ossoff’s lead had grown to .6 percent. That's just above the .5 percent margin that would have allowed Perdue to request a recount. The Associated Press and several news outlets called the race for the Democrat.

The slim margin mirrored the tight race between President Donald Trump and President-elect Joe Biden in Georgia in November. Biden won the state by less than 12,000 votes. Trump has spent weeks contesting the results in Georgia and a handful of other states, but courts have rebuffed claims the election was fraudulent.

After weeks of bitter confrontation between Trump and Georgia Republicans unwilling to declare the election invalid, the president spent part of his time at a rally in Dalton, Ga., Monday night talking about the Electoral College vote on Wednesday. He told the crowd he hoped Vice President Mike Pence would “come through for us.”

On Wednesday, Pence told lawmakers in a letter that his “oath to support and defend the Constitution constrains me from claiming unilateral authority to determine which electoral votes should be counted and which should not.” He ended his letter: “So Help Me God.”

Hours later, Pence was rushed from the floor of the Senate when a gang of rioters invaded the Capitol shortly after a nearby Trump rally, halting the electoral tally and plunging Washington, D.C., into stunning chaos. 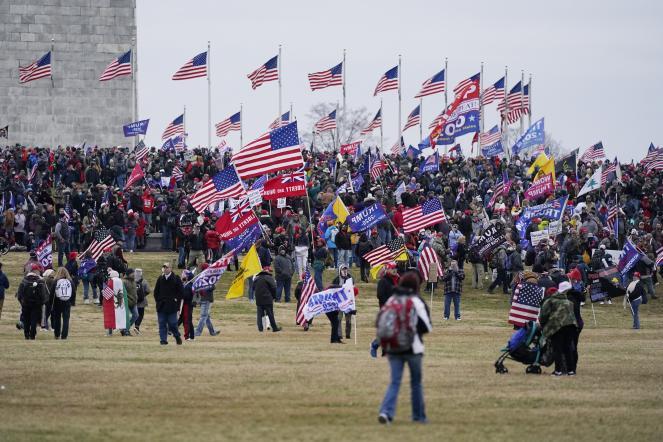 Republican finger-pointing for the Georgia election results began on Wednesday morning, as officials waited to see if Ossoff would win his race and hand Democrats narrow control of the U.S. Senate.

An obvious question for the GOP: Did the president’s weekslong insistence that the presidential election was rigged cause at least some disgruntled Republicans to sit out the runoffs in Georgia?

Erick Erickson, a conservative radio host in Georgia, thinks it did. In a commentary on Wednesday morning, Erickson noted that Democrats voted at rates close to their Nov. 3 turnout. Republicans didn’t.

Erickson reported that the area of North Georgia where the president rallied on Monday night turned out at a lower rate than the rest of the state. Without Trump on the ballot himself, it appears many Republican voters in Trump-friendly territory stayed home: “It turns out when the President, the congressmen, and the Georgia GOP State Chairman all tell Republicans that their votes don’t matter because the Democrats are stealing everything, those voters don’t show up.”

Ossoff’s projected win brings the political balance in the U.S. Senate to 50-50. Vice President-elect Kamala Harris would break any tie. That would put Democrats at a disadvantage for passing any major legislation that would require 60 votes to overcome a filibuster. But it would clear the path to confirming President-elect Joe Biden’s Cabinet picks and any judicial nominations—including Supreme Court justices.

Those votes require a simple majority.