Seeing God in the cosmos

2021 Book of the Year: Accessible Science Books to help readers observe the world and the God who made it

Intelligent design theorists are, by and large, content to make a limited argument: “I have my beliefs about who the Designer might be, but all I’m arguing here is that there obviously is one.”

Stephen C. Meyer, director of the Discovery Institute’s Center for Science and Culture and WORLD’s 2009 Daniel of the Year, took that approach in his previous two books, Signature in the Cell and Darwin’s Doubt, which tackled cellular DNA and the Cambrian explosion in the fossil record, respectively. In each, he argues that the evidence suggests some kind of design undergirds the material phenomena.

In his third book, Meyer digs deeper and explains how he actually understands the universe. Return of the God Hypothesis: Three Scientific Discoveries That Reveal the Mind Behind the Universe goes beyond the standard intelligent design argument, deploying scientific discoveries of the last century to argue for a personal God, like the one we know from the Bible.

In the first two sections, Meyer doesn’t build a case so much as tell a story and answers the question: Why do we live in a world where God is considered a null hypothesis? His answer covers both scientific discoveries and important historical and philosophical figures, emphasizing that such a critical shift involves more than new empirical facts.

The second and most compelling section plays out almost like a mystery: Meyer introduces us to a cast of intriguing scientific characters whose discoveries become a step-by-step revelation of purpose in the cosmos. His narrative ranges across scientific disciplines: physics, the origin of the universe, our planet’s perfect conditions, the complexities of cellular biology, the enigma of life’s origin, and the unexpected history presented in the fossil record. He convincingly paints a picture of a secular-scientific model on the brink of collapse under the weight of anomalies and unacceptable conclusions that—to any unbiased party—strongly imply theism. (Relying on the Big Bang as a central piece of the puzzle means Meyer cites standard timetables and an ancient universe.)

Part three focuses on helping readers unpack everything they have just read. Meyer not only explains complicated scientific ideas with precision and clarity, he also leverages his background in philosophy to teach readers how to weigh those ideas and use them to come to reliable conclusions. He meticulously works through the metaphysical options and compares them to the best available science. He’s not arguing against secularism so much as painting a picture of a profoundly meaningful universe, where cutting-­edge knowledge squares convincingly with the idea that a personal God is at work in the world.

In the fourth section, he engages with those who have attempted to patch the secular-scientific worldview with creative new models or explanations in order to avoid theistic implications. It’s a fascinating crash course in some of the stranger ideas coming out of the science academy, such as new versions of evolution, the many-worlds theory, and string theory.

Meyer’s conclusion reveals a soft spot for students who labor under the idea that science requires them to abandon belief in God.

Much of this will be familiar territory, especially to those who have read Meyer’s other work—fine-tuning, the Cambrian explosion, the complexity of cells, the information in DNA. But Return of the God Hypothesis weaves it all into a unified story of meaning, communicated with clarity and force. As always, Meyer is nothing if not thorough, and some sections can be tough going. But good anecdotes and analogies offer readers a break now and then, and the story of Meyer’s own spiritual journey toward the end is particularly poignant. 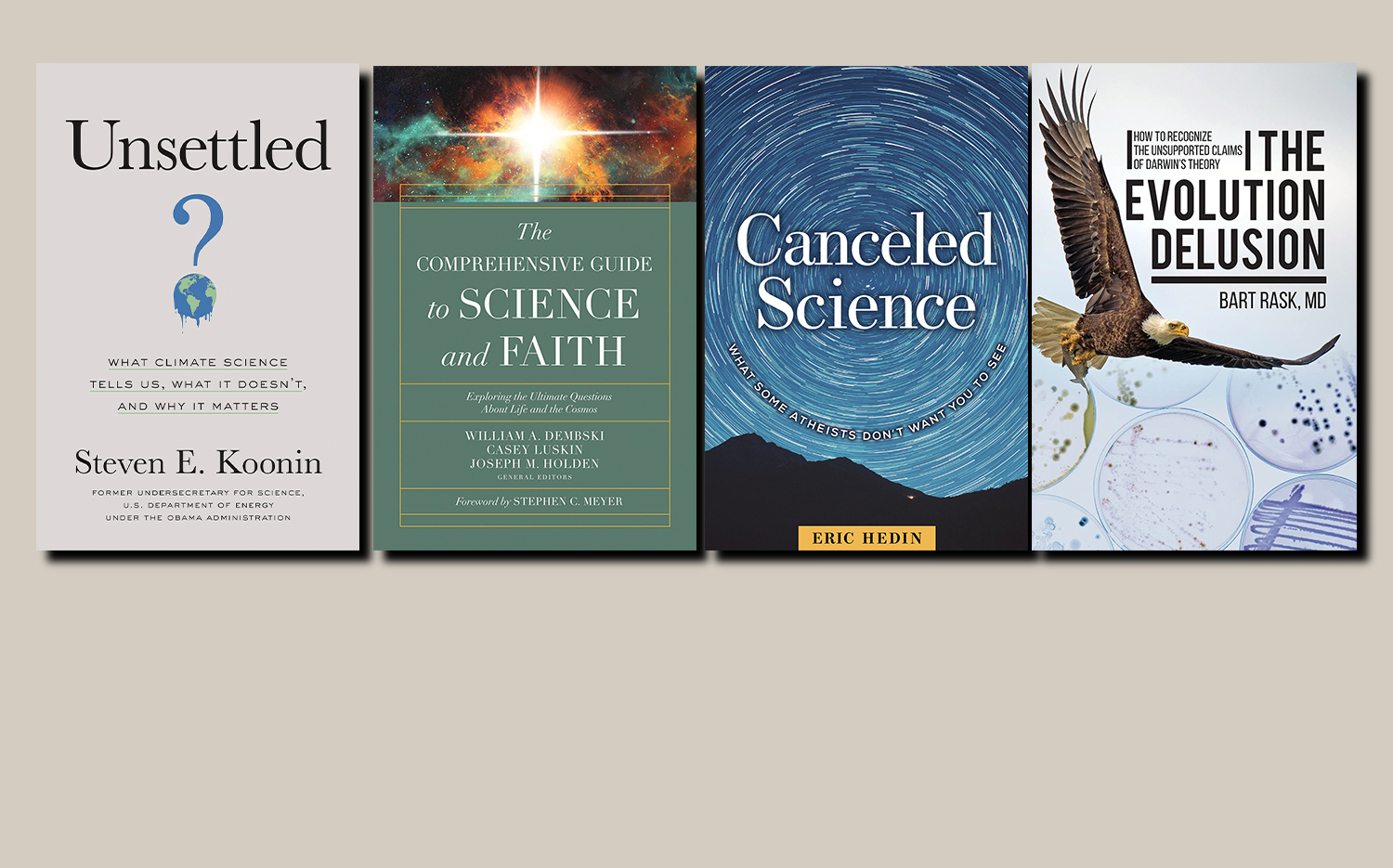 Unsettled: What Climate Science Tells Us, What It Doesn’t, and Why It Matters

A former science and energy official under the Obama administration, Steve Koonin would be hard to peg as a ­“climate denier”—and he certainly wouldn’t claim the title for himself. But in Unsettled, he explores the inherent ­uncertainties in current climate science, how official reports often gloss over those uncertainties, and how unwarranted confidence is then passed onto the public via an overenthusiastic media. He doesn’t argue that climate change isn’t happening or that humans aren’t contributing, but he shows the scale and impact of both are very much in doubt. Readers may disagree with him at certain points, but his measured, precise take provides a breath of fresh air in an increasingly hysterical debate.

The Comprehensive Guide to Science and Faith: Exploring the Ultimate Questions About Life and the Cosmos

This book has a chapter for everyone, no matter the particular interest when approaching the topic of science and faith—theology, neuroscience, evolution, philosophy, history, or something else. Editors William A. Dembski, Casey Luskin, and Joseph M. Holden weren’t kidding when they called this guide “comprehensive.” And while the list of authors may skew toward intelligent design theorists, there are also various stripes of creationists represented: It’s clear that if you sat all the writers down in a room, they would have plenty to argue about. That’s what makes this book really interesting, particularly the final section tackling the “hard questions” at the intersection of science and faith.

Canceled Science: What Some Atheists Don’t Want You to See

Eric Hedin taught science at the undergraduate level for years before becoming a target of the pro-evolution mafia, and that experience shows in Canceled Science. He masterfully simplifies complex ideas into digestible bites and weaves in anecdotes and descriptions throughout. Despite the harassment he has faced, Hedin’s tone is marked by grace and gratitude. The book revamps the content of his ill-fated Boundaries of Science class with updates and a sense of intellectual freedom that is becoming increasingly scarce in academia. While he covers a range of topics from biology to chemistry and more, he really shines in the astronomy and physics sections.

The Evolution Delusion: How to Recognize the Unsupported Claims of Darwin’s Theory

The defense of neo-Darwinian evolution relies on large-scale storytelling and a supposed near-consensus in the scientific community in the theory’s favor. But the real work of science is done in the lab and in studies, and that’s where Bart Rask takes the fight. The Evolution Delusion offers a meticulous review of the scientific literature commonly used to support Darwinian evolution, carefully deconstructing the evidence propping up the theory. It covers ground ranging from the methodologies of science, to genetics and reproduction, the origin of life, and standard dating methods. While Rask doesn’t offer new theories, he is focused on making room for experts to look for ­better answers.