Aisha, a Nigerian woman whose identity has been concealed, described to Reuters her capture by Islamist militants, a forced abortion by the military, the loss of one child in a military bombing, and what she suspects was the poisoning of another child by soldiers. Christophe Van der Perre/Reuters/Alamy

The Rev. Gideon Para-Mallam began fielding calls and messages soon after reading a December report that made a startling claim about his Nigerian homeland: Its military had been conducting forced abortions on young women rescued from members of a terrorist organization.

Nigeria has waged a yearslong war against insurgent groups, primarily Boko Haram, in the country’s northeast. But Para-Mallam, who runs a social justice foundation in central Nigeria and campaigns in support of captive Christian girls, said that it’s often difficult to get the full story on the conflict.

“Within hours, someone called me and said, ‘Have you seen this and what do you think?’”

The report in question—an investigation by the U.K.-based Reuters news agency—claimed the Nigerian military has run a “secret, systematic and illegal abortion program” since 2013, resulting in at least 10,000 abortions. A companion Reuters report accused security force members of also killing older children in the ongoing war against Islamic insurgents. If accurate, the revelations indicate massive, previously unreported human rights violations by the government of Africa’s most populous nation.

Nigerian authorities strongly disputed the damning series of reports, which have elicited international attention. Locally, the accounts left many mystified over how such a program could have run undetected for years. But security analysts say the potential global implications for Nigeria, which relies on foreign support to combat the insurgency, are yet to be seen.

In its report on the forced abortions, Reuters said it spoke with soldiers, government employees, and 33 women and girls—the majority of them kidnapped, raped, and impregnated by insurgents. The report cited military documents and civilian hospital records detailing the procedures on women and girls ranging from a few weeks to eight months pregnant. One was as young as 12 years old. The abortions took place in at least five military facilities and five civilian hospitals through at least November 2021, according to Reuters.

Some of the women said soldiers beat them or lied about the injections and pills they were given, including oxytocin and mifepristone, to induce abortion. “If they had left me with the baby, I would have wanted it,” Bintu Ibrahim, now in her 20s, told Reuters.

The news agency said the motive was a widely held notion in the region that children of insurgents are likely to become terrorists themselves. Four health workers told reporters the ­abortions were for the good of society, with one saying, “This child is already sick from conception.”

In a separate report, Reuters said the Nigerian army and other allied forces shot, poisoned, or suffocated at least 60 children in six army-led events, most recently in February 2021. Reuters’ sources claimed army commanders asked them to “delete” children either suspected of collaborating with the insurgents or fathered by them.

Gen. Lucky Irabor, Nigeria’s chief of defense staff, rejected the reporting as “fictitious” in a statement. “Irrespective of the security challenges we face as a nation, Nigerian peoples and cultures still cherish life,” he said. He highlighted the military’s effort to rescue and assist former captives, including women and children.

Boko Haram, a terror group known for its strict interpretation of Islam, began in northeast Borno state and heightened its military attacks in 2009 following the death of its founder. The violence has displaced more than 3 million Nigerians, with its influence cutting across the wider Lake Chad Basin.

The group notoriously abducted 276 schoolgirls from Chibok in 2014 and has pillaged communities and destroyed homes and churches across the northeast. A breakaway faction, the Islamic State West Africa Province, has also claimed responsibility for kidnapping girls, both Christian and Muslim. Though the girls are sometimes released, many are forced to become wives for the militants, often bearing children before they escape, or are ­rescued by government forces, if they are rescued at all.

Nigerian authorities have faced scrutiny over their handling of the unrest. In 2015, rights advocacy group Amnesty International accused the military of extrajudicially executing more than 1,200 suspected militants, ­including boys, in the northeast, claiming the actions amounted to war crimes. Targeted communities have also recounted security forces’ delayed arrival or total absence during ­terrorist attacks. 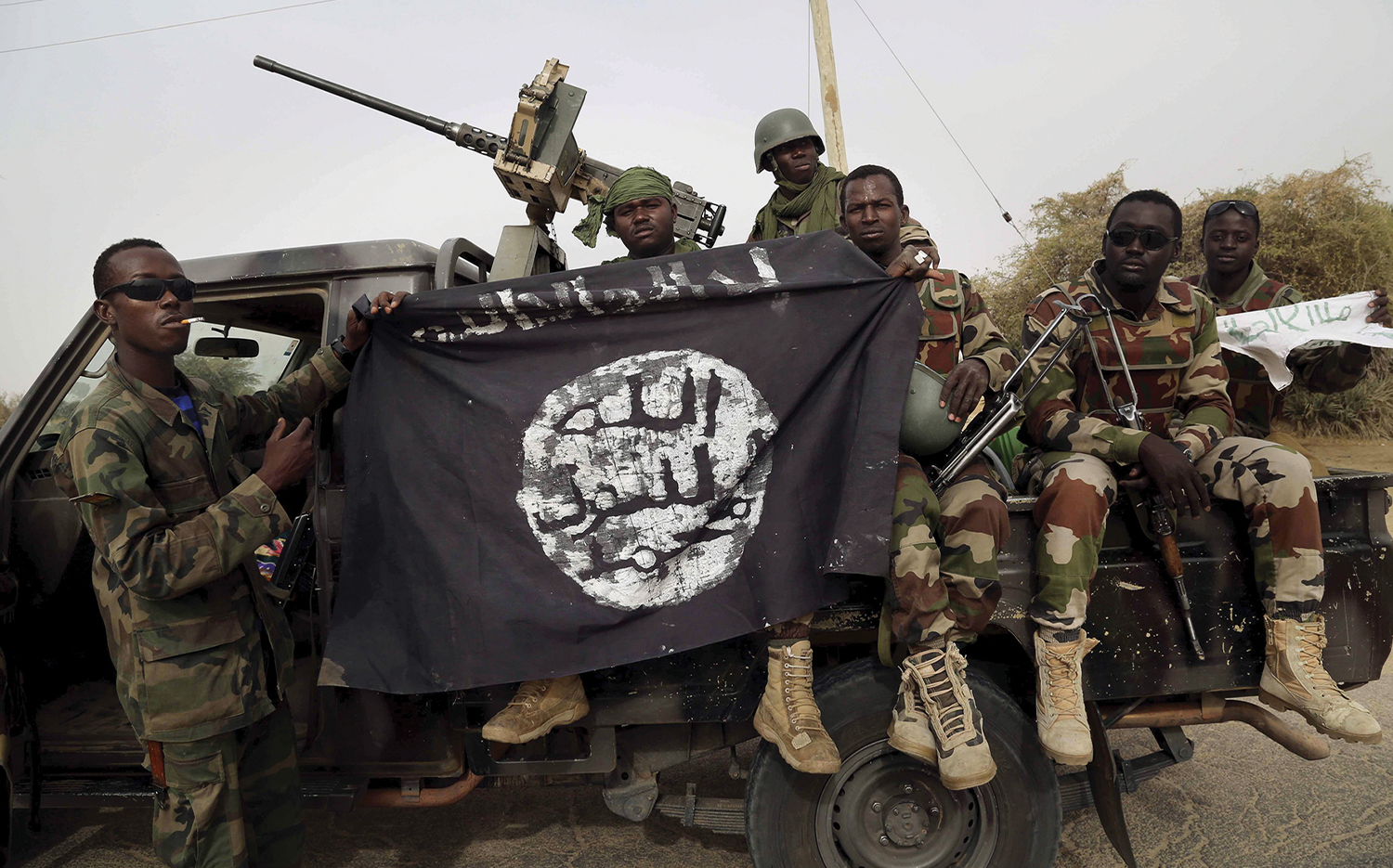 Nigerian soldiers hold up a captured Boko Haram flag after retaking the town of Damasak from militants in 2015. Emmanuel Braun/Reuters/Redux

Mark Lipdo of the Stefanos Foundation, a Christian group in central Plateau state, said such accounts have built mistrust of government among locals over the years. “Nigerians are tired of that, and yet Boko Haram is alive and doing atrocities on the ground,” he said.

Lipdo said he has heard about cases of sex-for-food at displacement camps in the northeast but never about forced abortions. Although concerned about the report, he noted that those opposing the military’s anti-terror campaign have leveled human rights accusations as a way to stall the military’s progress. “At that point, Boko Haram would regroup and continue their massacre.”

Para-Mallam questioned the report’s timing just before national elections in February. Yet, like Lipdo, he agreed the claims are worrying and should be investigated further.

Leena Koni Hoffman, an associate fellow in the Africa Program at the U.K.-based Chatham House, said the military’s immediate “blanket denial” was unsurprising. She sees the findings as not far off from other accounts of gender-based violence that have emerged from the region. “Increasingly, there’s a very thin thread of trust between communities and the military in places where there are internally displaced camps.”

Analysts are watching to see how the report and any ensuing investigation could affect Nigeria’s relationship with its foreign security partners, including the United States. Last April, U.S. officials approved military equipment sales worth $1 billion to Nigeria, including 12 AH-1Z Viper attack helicopters and night vision navigation systems. The United States had initially delayed the sale over human rights concerns, including allegations of the military’s use of excessive force on unarmed civilians.

In a response to the Reuters report, the United States, UN, and U.K. have all issued statements of concern and called for investigations.

Sean Nelson, a religious freedom expert at ADF International, said the report “should be a wake-up call for the Biden administration, and the rest of the international community, to recognize the true scope of the human rights and religious freedom atrocities occurring in Nigeria.”