Saved on the streets

Yes, Collins has met many nice-looking folks during his 30-something homeless years—people who he recognizes weren’t all that much happier than he. But few stopped to see him. And until somebody did, all Collins saw was bleakness in his world, a life wasted on crack and all the humiliating, unconscionable things he did for that crack.

Today, 50-year-old Collins is still homeless. He sleeps in his secondhand maroon van or a bunk bed in a rehabilitation center. And that’s what people may see: A lanky man with big ears—ears that stick out of a boney-cheeked, ebony-toned face and a gangly frame that earned him the childhood nickname “Monkey,” convincing him from youth he was ugly. A crack baby who spent 27 years behind bars for drug-related crimes, who had sex with multiple men to survive a brutal prison life, who now chews with his gums because all his teeth fell out from lifelong drug abuse.

But people who did stop to see him—really see him beyond his appearance and circumstance—discovered there’s much to cherish about Collins. Those ears he hated have a sharp sense for music, truth, and bull. That toothless mouth belts out prophetic songs that leave many listeners weepy. Those lean arms eagerly give bear hugs, those hands clap joyfully in anticipation of peanut butter pancakes. And oh, his spirit: Despite his years of wandering in darkness, Collins burns with a desire to share his hope in the God who daily delivers him from shame, sordidness, and sickness.

In my May 27 WORLD Magazine story on homelessness in Los Angeles (see “Not by bread alone”), Union Rescue Mission CEO Andy Bales said the people of LA need a “heart change” in order to help the homeless. I asked him how: Changing policies and programs is challenging enough, but to change the fickle, calloused, innermost heart of man? Bales said there’s not much magic to it: “We need to get people face-to-face with people experiencing homelessness.”

Collins goes further: The people being helped need a heart change too. And that heart change comes from above: “It’s a God thing. God has to move their hearts.” He goes another step: “Even though there are thousands of homeless people out here, there are maybe just 100 among the thousands who can be helped and are meant to be helped.” I protested, “But shouldn’t we try to help everybody?” He shook his head: “There are a selective few whom God will bring to you and say, ‘This is the one.’ Why this one and not that one? Because this is the one God had already prepared. The minute you offer that branch, they’ll grasp it, and it’ll be so easy to pull them out because God has readied their and your hearts.”

Collins speaks from experience. He has endured much pain and suffering throughout his life, and every time he almost “made it” out with his own will and smarts, “God said, You’re not ready. You still got to go through some hardship, some pain. When you’re ready at my appointed time, I’m going to take you in ways that you never thought possible. Boom.”

Not until Collins finally was ready to accept help, return love, and surrender to God did he meet a certain couple outside a bar in downtown LA. They were standing among a group of smokers, and when Collins offered to sing for them, all disbanded except Aimee Schoof, a filmmaker, and William Dane, a music producer. Collins sang a cappella for them for 30 minutes, and by the end, Schoof had found her new subject for a documentary (Mighty Ground, which will premiere at the LA Film Festival on June 19). Dane offered to help Collins create a record album: For weeks before meeting Collins, Dane said he’d been receiving visions that he would help a homeless stranger fulfill his dream. “But I didn’t realize the impact Ronald would have on me,” Dane told me. “It wasn’t all for Ronald to grow. It was for me, too.”

For Collins, meeting Schoof and Dane was life-changing: They helped him into a drug recovery center, kept pursuing him even when he isolated himself, and constantly reminded him of great things ahead. “That alone was enough motivation for me to want to change,” Collins said, who now works as a store manager. “They resuscitated something that was dead: the hope, the love, my self-worth, because I didn’t see any hope in myself.” Since April 24, 2016, Collins has not touched drugs or alcohol. And he fights every day to stay that way.

On April 24, I visited Collins to celebrate his one-year sober anniversary with his favorite cake: chocolate-glazed chocolate cake, filled with fresh strawberries and dusted with sugar snowflakes. Someone suggested he sing, and he sang the classic “Happy Birthday to You.” I was baffled—it was his sober anniversary, not his birthday—but then I got it: To Collins, this day marked the birth of a new person, a brand new life made whole. Happy birthday, Ronald Troy Collins. 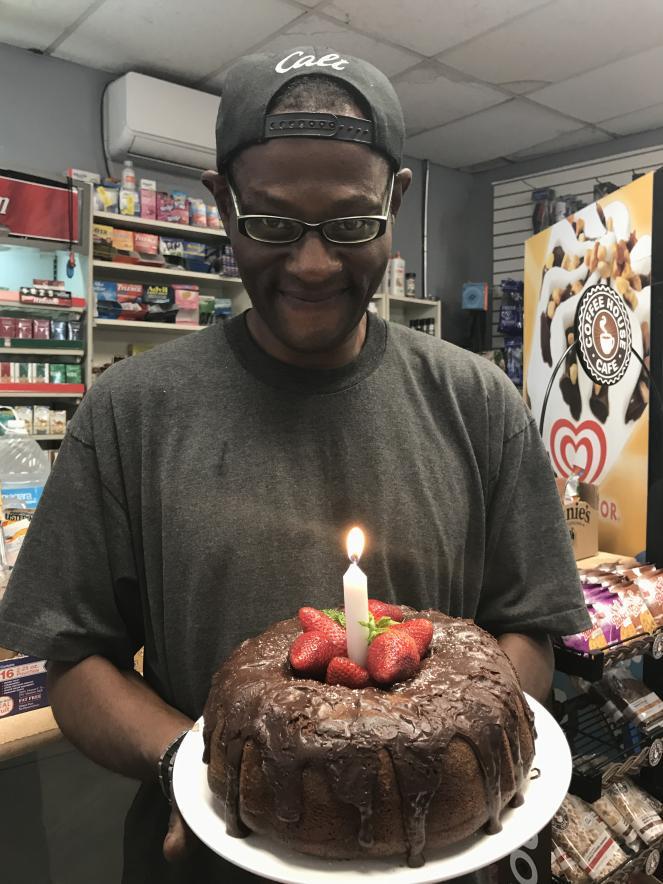 So why is Collins still homeless?  (A serious question).

I want to give him a hug now. Happy Birthday Mr. Collins!