The first week of May, Samaritan’s Purse began disinfecting and packing up its tents from its Central Park field hospital after a six-week deployment at the epicenter of the nation’s COVID-19 outbreak.

The hospital in the middle of a Central Park meadow became a symbol for the seriousness of the virus outbreak. A new study from the Centers for Disease Control and Prevention shows that from March 11 to May 2, more than 24,000 New Yorkers died above the time period’s usual number.

The Samaritan’s Purse (SP) field hospital, which worked under the auspices of local hospital system Mount Sinai to receive patients, discharged its last patient last week. Hospitals around the city have been shutting down their special COVID-19 wards as the volume of critically ill patients has receded, and the USNS Comfort hospital ship departed the city the previous week.

The staff worked 12-hour days. Remarkably, considering the thousands of New York medical workers who caught the coronavirus, no SP medical staff came down with the virus over the course of their New York sojourn, according to Dr. Elliott Tenpenny, who headed up the field hospital for Samaritan’s Purse. Tenpenny, an emergency doctor by training, previously worked for years in the Democratic Republic of Congo, and SP employed some of the decontamination techniques from fighting Ebola—like a bleach water system—at the Central Park field hospital. 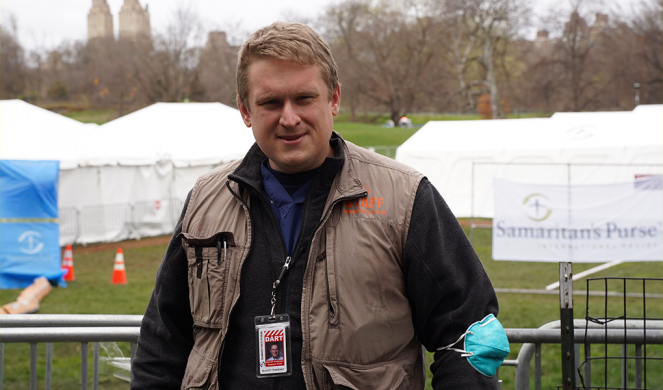 But it faced unique challenges too: isolated opposition from gay activists and politicians in the city. At one April protest outside the tent hospital, gay activists from the Reclaim Pride Coalition chanted loudly, “Help not hate!”

“Why was Samaritan’s Purse the go-to?” asked Jay Walker, an activist speaking at the protest. He said he had Googled “field hospital” and found many companies that offered field hospital services.

Samaritan’s Purse was the go-to because aside from the U.S. military, it is likely the only domestic humanitarian group that could have set up a high-level hospital with an intensive care unit and staff in the space of 72 hours. Médecins Sans Frontières (Doctors Without Borders) is probably the other organization with that capability, but it is focused overseas. 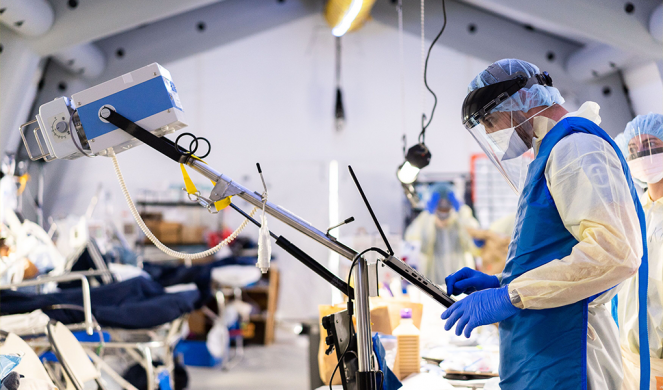 Tenpenny shrugged off the protests: “We’ve never been protested anywhere we’ve been for doing that kind of thing in the hospital.” He has worked in field hospitals in a war zone in Iraq and in Ebola outbreaks. “But it’s their right to do that … it’s easy to stand back and criticize and make comments. It’s easier than getting out and helping … We didn’t agree on every aspect of every political stance, nor should we have to.”

The protests amounted to a lot of hot air, and many of the loudest naysayers, like City Council Speaker Corey Johnson, waited until several weeks past the peak of the outbreak to tell SP to “leave New York City.”

Much of the controversy centered on SP’s requirement for personnel to sign its statement of faith, a normal practice for religious non-governmental organizations. New York Attorney General Letitia James issued a press release saying because of SP’s statement of faith, the office would “remain vigilant to ensure discrimination does not occur.”

The New York City Human Rights Commission initiated an investigation into the hospital, but closed it in early May after finding no evidence of discrimination. Tenpenny said the mayor’s LGBT ambassador would visit the hospital frequently. They had open and cordial communication.

“People that are driven by their faith—it’s not just what the world believes it is, which is we’re just out there to condemn people, no,” said Tenpenny. “Our faith is the reason we do this, but we’re called to do it with quality, and to do it just as well as anybody else, Christian or non-Christian—to provide the same level of care.” 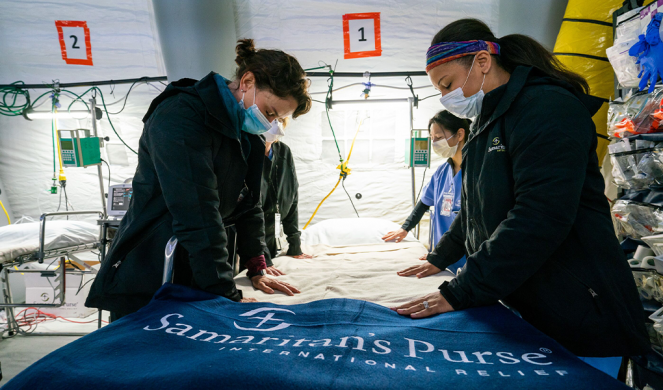 While protesters posted signs on fences surrounding the hospital, grateful New Yorkers also placed flowers there. SP workers said they didn’t have to worry about meals: Food trucks and catering companies showed up with free food.

Through all the fuss, Mount Sinai did not waver from its partnership with SP, even when activists accused the hospital system’s gay president of having “forgotten his community.” Mount Sinai and SP assured the public that they would serve all patients equally, and Mount Sinai posted a video commemorating the field hospital when it discharged its final patient.

“Mount Sinai was one of the best partners we’ve ever had on the field, frankly,” said Tenpenny. He thinks Mount Sinai faced more pressure in the controversy because the hospital system remains in New York after SP packs up and leaves. “To stand up for the lives of New Yorkers over and above any kind of political stance or a news article or bad press, that spoke volumes,” he said.

Tenpenny also thought this partnership with a field hospital and an existing facility was a good model for other places around the United States facing outbreaks that might overwhelm hospital systems, as happened in New York.

“We took care of more patients than the Comfort did because we didn’t have standalone processes,” said Tenpenny. “Mount Sinai’s policies and procedures remained in place, so we could just slot right in.” Humanitarian groups often bring their own processes, which slows things down.

Tenpenny highlighted advantages SP had that other hospitals didn’t: It could design the layout of the hospital for COVID-19 patients. SP built donning and doffing stations where personnel wanted, moving wards around to decrease infections. Workers also could compare notes with the medical team at the SP field hospital in Italy, which had a few extra weeks of experience with the virus.

Tenpenny was initially concerned with how Americans would react to receiving treatment in a tent hospital. But the “real community in the tents” pleasantly surprised him. Most patients there were ethnic minorities from Queens and Brooklyn. At times the majority were Spanish-speaking, which made Tenpenny glad SP had Spanish-speaking nurses. 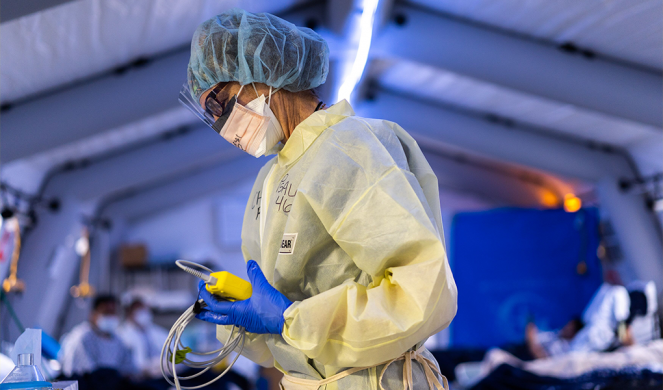 Treatment of an unknown virus was difficult, and doctors watched patients go from stable to very sick rapidly with no explanation. “It could be, the person was talking to you, and then a day or two later they’d need intubation,” said Tenpenny. “There was seemingly no rhyme or reason.”

Blood clots also mysteriously emerged among many patients, which is now a known feature in certain COVID-19 cases. Around 3 a.m. one night, a patient got a “terrible blood clot” that went to the lungs, Tenpenny recalled. The patient was dying. The SP staff quickly intubated the patient, and did an ultrasound to confirm what was going on in the heart and lungs. Then they transferred the patient across the street to Mount Sinai, which had the drugs to bust the clot. The patient survived.

SP’s field hospital will likely deploy elsewhere overseas now. Tenpenny hopes it won’t have to come back to New York if there’s another big outbreak later this year.

“We’ll be ready wherever is in need,” he said.