People gather at a rally in support of jailed opposition leader Alexey Navalny in the historical center of Moscow on Wednesday, April 21. AP Photo/Denis Kaminev

After Russian riot police arrested David-Viktor Ratkin at a Jan. 23 protest in Kaluga, Russia, this year, judges at a hastily arranged trial sentenced him to 10 days in jail. As the 24-year-old sat behind bars, his parents brought him food and books to pass the time. But he had no regrets.

“I was ready to be arrested, because if you do politics in Russia you see this situation every day,” Ratkin says. “You have a lot of friends who are not just detained for 10 days, but who are in real prison for years.”

The January protest was in support of Alexey Navalny, a prominent critic of Russian President Vladimir Putin. Now in prison for what authorities have called a parole violation, Navalny ended a 24-day hunger strike last Friday, just two days after thousands of Russians again rallied in his defense, resulting in more arrests. Navalny has campaigned against corruption in Putin’s government, yet not all Russians support his opposition movement—and that political divide has extended to churches in the country as well.

Amid the ongoing protests, many Russian Christians struggle with knowing how to walk the line between respecting authority and calling for justice in society. The past year’s protests have highlighted strong differences of opinion within Russian churches.

Ratkin, whose father Bishop Albert Ratkin pastors an evangelical church in Kaluga, was interested in politics from a young age. After time studying abroad, he returned home and was disheartened by the lack of freedoms he observed in Russia. He soon became involved with Navalny’s political organization and helped run opposition Telegram channels. That’s when his troubles began: University authorities forced him to move out of student housing, and he found his applications to higher degree programs inexplicably denied. (After his arrest, a document leaked from the local police showed what he’d guessed: His name had been on a blacklist sent by police in Moscow.)

Ratkin grew up in Kaluga, and his father’s church, Word of Life Christians of Evangelical Faith Pentecostal Church, has experienced government corruption firsthand. The congregation purchased an old Soviet building in 2000 and has since fought lawsuits as the government has sought to regain control of the property. Bishop Ratkin says the church eventually learned the former governor of the region had promised the property to a friend. The church faced 12 government-driven lawsuits in 2020 alone, he says. Last year authorities sealed the building, and since then the congregation has braved the cold Russian winter and met in a rented tent on the property. 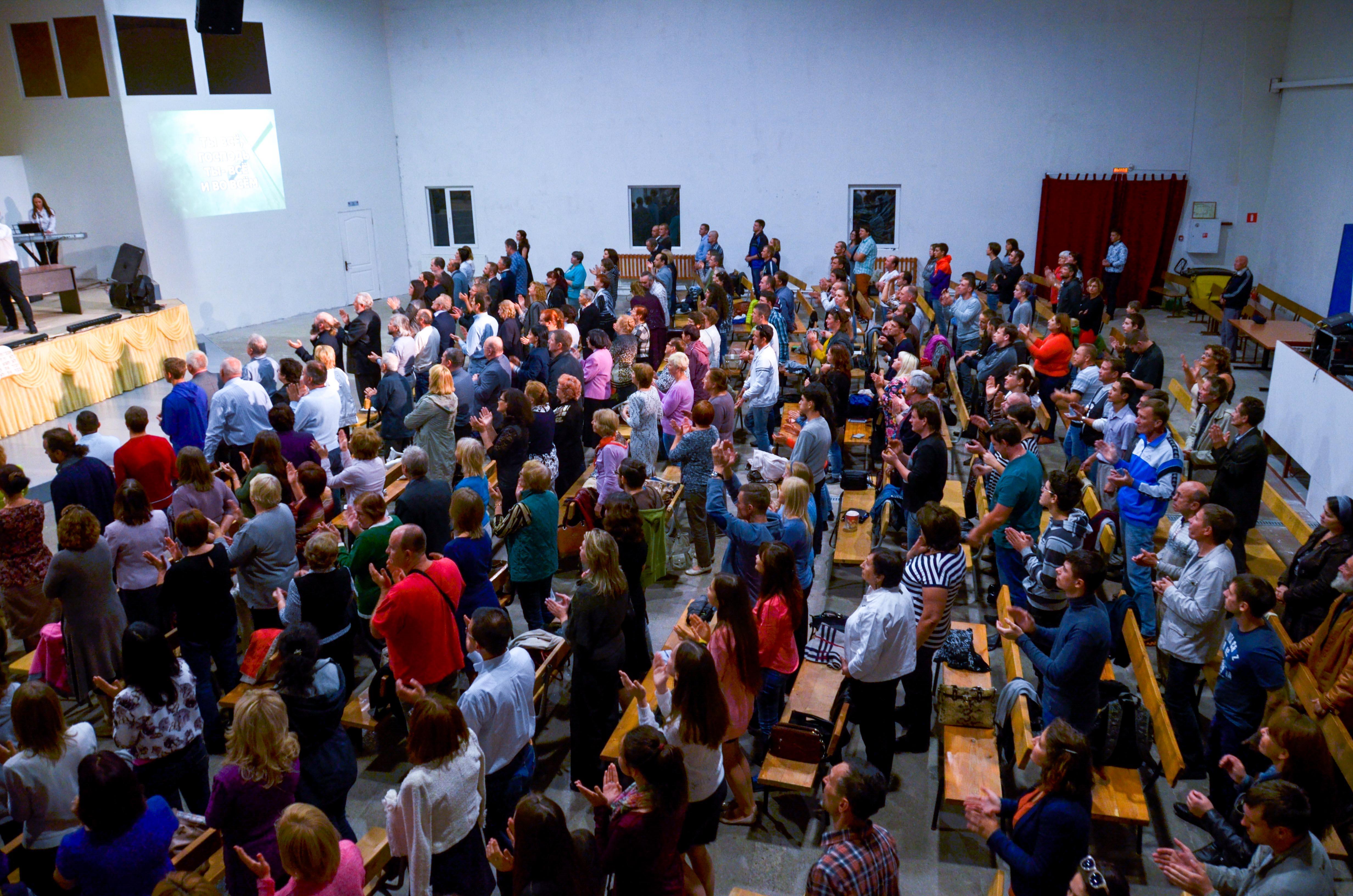 The Word of Life Christians of Evangelical Faith Pentecostal Church congregation meeting before the government closed its building in Kaluga, Russia. Handout

The bishop believes the government has long overstepped its bounds. “If you invite somebody to the church, police arrive and say you have to have a special document from your religious organization to preach to people or invite people,” he says. “And there are stupid requirements: Every book must have a stamp with your organization and your registration number in it if you want to give people a New Testament or a Christian book. The same literature is in every bookstore, but only religious organizations must have this information. Home groups are not allowed.”

In 2016, Federal Security Service officials detained and fined visitors to the Kaluga church from the First Presbyterian Church of Baton Rouge for joining a prayer meeting while on a tourist visa.

Yuri Sipko, pastor of a Baptist church in Moscow and former leader of the Russian Baptist Union, lived through the Soviet era and sees the current government accepting and promulgating old stereotypes of Christians. “The Soviet regime had a view of the inferiority of belief and of faith. Christians were called and treated like second-class citizens,” he says. “Many of those who have grown up in Christian circles accept the view that we have to be quiet, to be silent, that we shouldn’t stand against the government.”

Sipko says that mindset is an asset to a government that sees anything not “traditionally Russian” as part of an external threat. The government views Protestant churches as a subversive influence from the West and sees any push for freedom of speech as an attempt to depose current authorities.

Persecution against Protestants tends to occur more in regional areas than in the capital of Moscow, an international city where the open oppression of churches might catch the public eye and cause scandal, noted David Ratkin. “Where there’s a small church in some city far away from Moscow, nobody will know about that.” 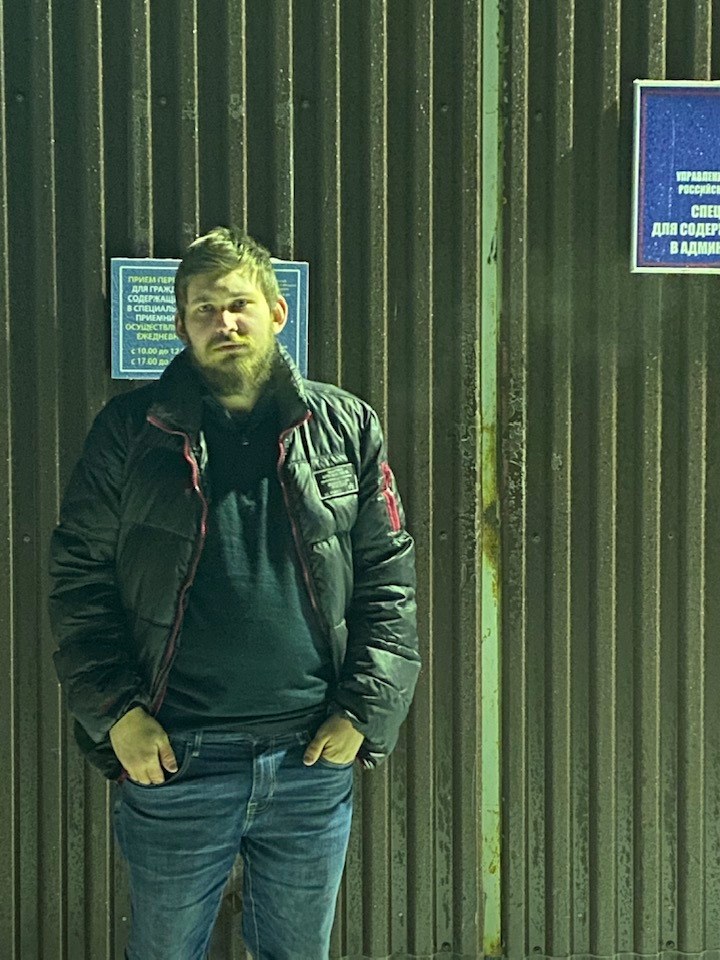 One result is that church members in the provinces have started to distrust certain Protestant leaders in Moscow who’ve called on members to boycott protests.

For example, a prominent Pentecostal leader, Sergey Ryahovsky, made a recent statement condemning Navalny and comparing protesters to fascist demonstrators in Western Europe, shocking some in his denomination. “How can you talk about the moral integrity of someone, accuse anyone of hypocrisy and at the same time behave so disgustingly and rudely with an almost century-old veteran?” Ryahovsky said in the statement. He was referring to a defamation case in which Navalny criticized participants in a video supporting the removal of presidential term limits. He called them a “team of corrupt lackeys.” (A 95-year-old World War II veteran, Ignat Artyomenko, was among the celebrities appearing in the video.) A court fined Navalny $11,000 in the case in February.

In his statement, Ryahovsky said a lack of respect for elders and for history’s lessons will drive Russia into the moral chaos already seen in the West.

Maria Kuznetsova—whose name WORLD has changed for her protection—is a Christian in western Siberia in her early 30s. She says when the government banned Jehovah’s Witnesses in Russia last year, some people in her Baptist church approved. But Kuznetsova wondered, “Why wouldn’t Baptists be next?” She thinks most of the older congregants in her church don’t feel the government needs accountability, even when it’s obviously acting corruptly. Her own church’s construction projects were delayed when church authorities made it clear they wouldn’t pay the bribes the authorities demanded.

When a Russian law restricting religious groups, the Yarovaya Law, went into effect in 2018, Kuznetsova says some churches didn’t immediately register with the government and ended up losing their buildings. Until recently, she says, she was apolitical, but government corruption and the regime’s mishandling of the pandemic have led to her growing frustration with the status quo.

Still, she is uncertain about the protest movement. The January protests made her feel unsafe in her city, and with police in riot gear on every corner, she avoided taking walks. She feels terrible for not attending the demonstrations, yet stories of detained prisoners make her fearful.

“I want democracy for my country,” she says. “I just don’t want to be here while it’s happening.”

David Ratkin agrees many people are fearful. But for some, he thinks, fear is turning to anger and action. And he thinks Christian believers must move beyond fear and embrace their responsibility as citizens.