As the presidential race looms large, Republicans are also in a fierce contest to retain control of the Senate

Earlier this spring, the campaign arm for Senate Republicans circulated a 57-page memo with striking advice on page 6.

When it comes to answering questions about President Donald Trump’s response to COVID-19: “Don’t defend Trump, other than the China Travel Ban—attack China.”

Another talking point: “I wish everyone had acted earlier—that includes our elected officials, the World Health Organization, and the CDC.”

“Don’t defend Trump” raised hackles in the Trump campaign, though the political consultant who wrote the memo said he didn’t intend to imply GOP candidates should distance themselves from the president.

Still, after Politico published a copy of the document, Trump political adviser Justin Clark told the news outlet, “Candidates will listen to the bad advice in this memo at their own peril.” He added that Republican candidates “who want to win will be running with the president.”

This may be a tough year to be running with the president. With a pandemic still spreading and racial tensions still stirring, polls showed Trump trailing Democratic opponent Joe Biden by nearly 10 points in early July.

Those numbers could improve over the next few months, or polls could prove inaccurate. But with Democrats needing to pick up only three or four seats to recapture control of the Senate, even Senate Majority Leader Mitch McConnell, R-Ky., has admitted for Republicans, “We have a lot of exposure.”

Dozens of Senate seats are up for grabs across the United States, but the contest for control likely comes down to a handful of close races and how the presidential race affects those candidates farther down the ballot.

Indeed, as the race for the White House grabs most of the political spotlight during a tumultuous summer, the battle for the Senate may prove to be just as hard-fought—and just as critical to Republican aims to thwart Democratic ambitions. 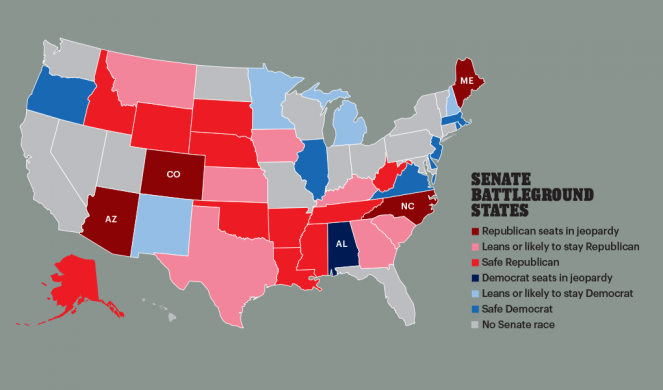 Based on statistics from the University of Virginia

The GOP currently holds a 53-47 majority in the Senate. If Democrats win three seats, they will achieve a 50-50 tie, with the hopes that a Democratic vice president would break any impasse. But with Democrats predicted to lose a seat in Alabama, the party would need to flip four GOP seats (and win the White House) to achieve the same result.

If Trump wins the presidency, Democrats would need to flip five seats—if they lose Alabama—to achieve an outright majority. Such a scenario (Trump winning the presidency while the GOP loses the Senate) is possible but seems highly unlikely.

Seth Moskowitz of the Center for Politics at the University of Virginia (UVA) has noted that senatorial candidates usually win or lose along with the presidential candidate of their own party. He argues that in this election it would take “an extreme departure from historical precedent for Democrats to net more than three Senate seats without also winning the presidency.”

That makes focusing on at least four seats a crucial target for Democrats aiming to win the Senate, and for Republicans hoping to keep it.

The GOP has more ground to protect: Twenty-three Republican seats are up for grabs this fall, while Democrats are defending 12 spots. But only a handful of those seats are considered swing states—or potential swing states—that could be in play. 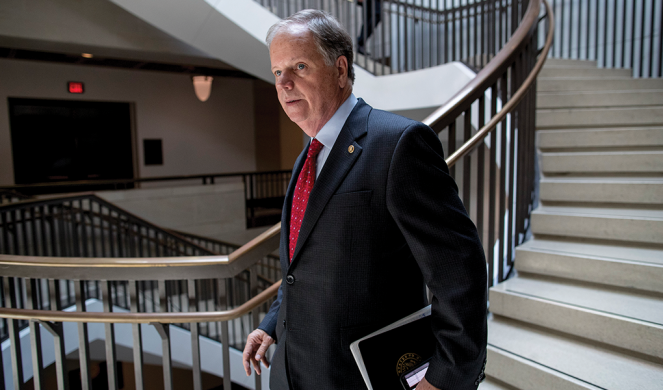 FOR DEMOCRATS, the greatest likelihood of losing a Senate seat comes in Alabama, where Democratic Sen. Doug Jones is up for reelection. Jones first took the seat nearly three years ago in an unusual victory after an unusual ­contest.

In 2017, Alabama held a special election after Republican Sen. Jeff Sessions left his post to become the U.S. attorney general. A Democrat hadn’t held a Senate seat in Alabama since 1997, but Jones prevailed over Republican Roy Moore: The former chief justice of Alabama looked poised to win the race until he faced sexual misconduct allegations from years earlier. Moore denied the accusations, but Jones won by about 2 percentage points.

Democrats aren’t expecting a similar blip this fall: Jones’ approval rating hovers around 41 percent in a state where Trump is popular.

In an electoral twist, Sessions returned to run for his old seat, while Trump backed former Auburn University football coach Tommy Tuberville over his former attorney general. After the coronavirus outbreak, Alabama officials delayed the state’s GOP primary until July 14. Tuberville easily beat Sessions and will face off against Jones.

While Republicans count on picking up a seat in Alabama, they’re also wistfully watching a seat in Michigan: The GOP has had high hopes for Republican candidate John James to defeat Democratic Sen. Gary Peters. James is an African American business owner and a combat veteran and has been considered a rising star in the Republican Party.

James is running in a state the president narrowly won in 2016: Trump became the first GOP nominee to prevail in Michigan since 1988. Trump’s prospects in the state are less clear this cycle (he’s trailed Biden in polls this summer). And while James raised more money than his opponent in the first quarter, he’s lagged behind by about 10 percentage points in recent polls.

Republicans won’t strike Michigan off the list yet, but they’re likely running election scenarios without a Wolverine win.

THE BEST SCENARIOS for Democrats come in a series of states nicknamed “the core four” this election cycle. The four seats pollsters view as most likely to flip have become the key targets for Democratic strategists.

Colorado appears to be the lowest hanging fruit for Democrats to pluck. The state has been moving further left in recent years: Democratic presidential candidates carried the state in 2008, 2012, and 2016. Democrats gained control of the Colorado state Senate in 2018 and retained the governor’s seat as well. 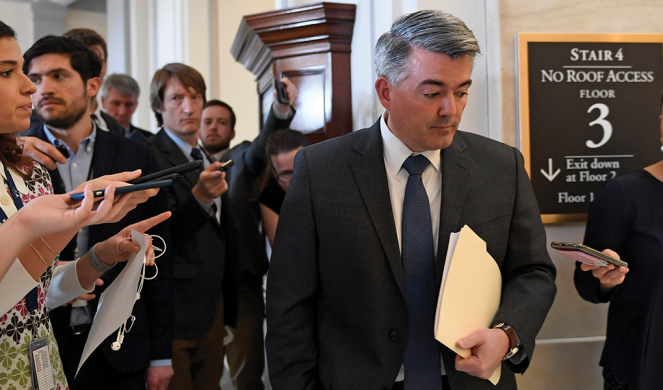 Maine is a fiercely independent state, but Republican Sen. Susan Collins may face a tight contest to keep the seat she’s held since 1997. She faces a Democratic challenge from state House Speaker Sara Gideon. 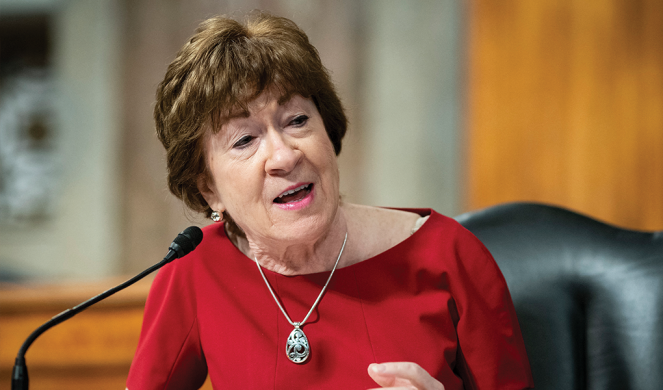 Collins is the last Republican senator in New England and has largely run on the independent streak that has made her a swing senator when it comes to votes among her Republican colleagues.

She voted to acquit Democratic President Bill Clinton in his 1999 impeachment trial, and she’s flummoxed pro-life advocates with a pro-abortion voting record. But Collins also voted to advance Supreme Court Justice Brett Kava­naugh’s nomination, a move Democrats in her state decried. It’s difficult to predict how independent voters in Maine will respond to her bid this fall, but Republicans are nervous.

In North Carolina, the races grow tighter in a closely watched swing state. A contest there may turn out to be the most expensive Senate battle this fall, as Republican Sen. Thom Tillis tries to hang on to the seat that he won in 2014.

Trump narrowly trails in polls in the state, and Tillis is on the same ballot with a Democratic governor up for reelection, Roy Cooper, who has enjoyed elevated approval ratings for his response to the coronavirus pandemic. 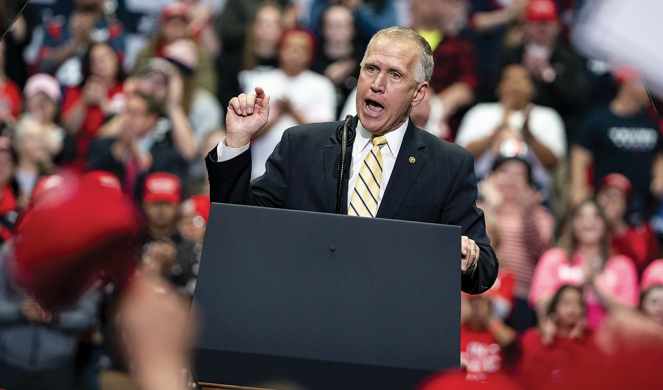 If those numbers hold, it could make it difficult for Tillis to prevail over Democratic opponent Cal Cunningham in the fall. (Tillis has publicly commended Cooper’s response to the pandemic—perhaps a sign his campaign is aware how the governor’s race affects the Senate contest.)

Arizona seems less likely to be in the most-likely-to-flip category: The state has a Republican governor, and the GOP holds both the state House and Senate chambers. Trump prevailed in Arizona by about 4 percentage points in the 2016 election. 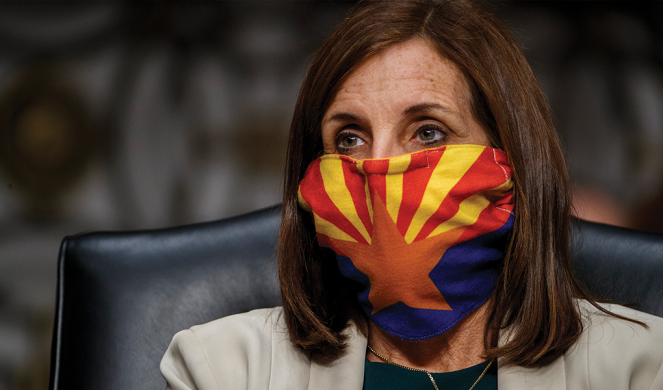 This cycle, McSally is running to hold her position against Democrat Mark Kelly, a retired astronaut who raised $11 million in the first three months of 2020. McSally reported raising $6.4 million in the same period and trails Kelly in recent polls.

Democrats aren’t solely focused on the core four states: They’re also watching Republicans trying to hang on to seats in Georgia, Iowa, and Montana—and an open race for a seat in Kansas.

If Moskowitz, the political analyst from UVA, is right about his predictions concerning straight-party voting, both parties will be watching to see how the presidential candidates fare over the next three months: “Down-ballot Republicans will be strapped to Donald Trump, as Democrats will be to their nominee.”

BEYOND THE MOVING PIECES on electoral maps, another question looms: What’s at stake in the outcome of the Senate election?

That partially depends on the outcome of the presidential election. If the GOP does manage to maintain control of the Senate even with a Biden victory, the party could exercise “the power of prevention,” according to political analyst Kyle Kondik.

Kondik notes Republicans could block most of Biden’s judicial nominations, including nominations to the Supreme Court.

If Democrats win a narrow Senate victory and a Biden presidency, they would still face difficulty passing some pieces of major legislation: In the Senate, it usually takes overcoming a 60-vote threshold to pass major bills that don’t involve spending.

Still, Democrats did use a process called budget reconciliation to bypass the 60-vote threshold and pass key portions of the Affordable Care Act. In 2017, Republicans used the process to pass tax cut legislation.

That means Democrats could try to use the process to pass legislation with spending attached. Democratic spending priorities include universal healthcare or an expansion of Obamacare. Analysts say universal healthcare could cost more than $30 trillion over 10 years. Biden has also proposed spending some $1.7 trillion on a climate change plan. His plan to underwrite two years of community college tuition for American students would cost at least $750 billion over 10 years.

A handful of Democratic senators have advocated abandoning the 60-vote threshold on major legislation as well—a move some call “the nuclear option” because of its power to allow a simple majority of the party in power to pass laws far more easily.

In 2018, President Donald Trump urged Majority Leader McConnell to use the “nuclear option” to pass legislation funding a border wall. But senators on both sides of the aisle have long resisted calls to allow a simple majority to gain nearly unfettered power in passing legislation, realizing neither party stays in power forever: What might seem good for the goose may not seem as good for the gander whose own party is no longer in control.

But as the presidential elections approach, Sen. Elizabeth Warren, D-Mass., is leading an effort to push Democrats to abandon the 60-vote threshold on legislation if the party gains control of the Senate in November.

Other prominent Democratic senators have said they still don’t favor changing the threshold. But depending on the political climate, it may be tempting: Democrats would only need 51 votes to change the rules.