Meeting refugees at the Ukraine-Poland border

Reporter’s notebook: Poles welcome the war-torn, saying, “We know it could be us”

Anastasia, a Ukrainian refugee, holds her daughter in her lap as they drive through Poland. Photo by Jenny Lind Schmitt

MEDYKA, Poland—An early morning flight from Basel this morning has me in Krakow, Poland, by 10:30 a.m. My driver, John Kiz, picks me up, and we head east on the highway. John is Russian, and I wonder how that might affect meeting Ukrainian refugees. As a kid, he listened to Christian programming on shortwave radio, believed the gospel, and was converted, upsetting his whole family. He used to be a Seventh Day Adventist pastor in Omsk, a city in southwestern Siberia. Now he says he’s Roman Catholic.

Signs along the road say in English, “Helpline for Ukrainian Citizens” followed by a phone number. It’s a two-hour drive to Rzeszow, a town about 55 miles from the Ukrainian border. When we get there, I find out my contact couldn’t meet me. It’s early, so we decide to drive on to the border crossing at Medyka. Signs on the highway announce Lviv, Ukraine, as the next big city. A missionary I’ve been in contact with in Rzeszow told me there is a refugee center in the village before Medkya, so we stop there. It’s a two-story community center, with a large orange tent in front.

Inside the tent, a friendly man named Paul tells me I’ll have to call a central number that’s dealing with the press. I dutifully write down the phone number but still ask a few questions, and Paul ends up being quite conversational. It’s a slow moment. The buses come in waves, he says. He doesn’t know why; it seems to be a decision on the Ukrainian side to let people through in waves. He is from the state government, and he welcomes refugees to Poland and gets them registered in the system. Then they can go into the center and eat and rest until they’re ready to move on. Then he’ll help them find rides or housing. There are 27 centers like this one across Poland. I tell him how impressed I am with everything the Poles have set up in the space of a week. He gives me an earnest look and says, “We know it could be us.” 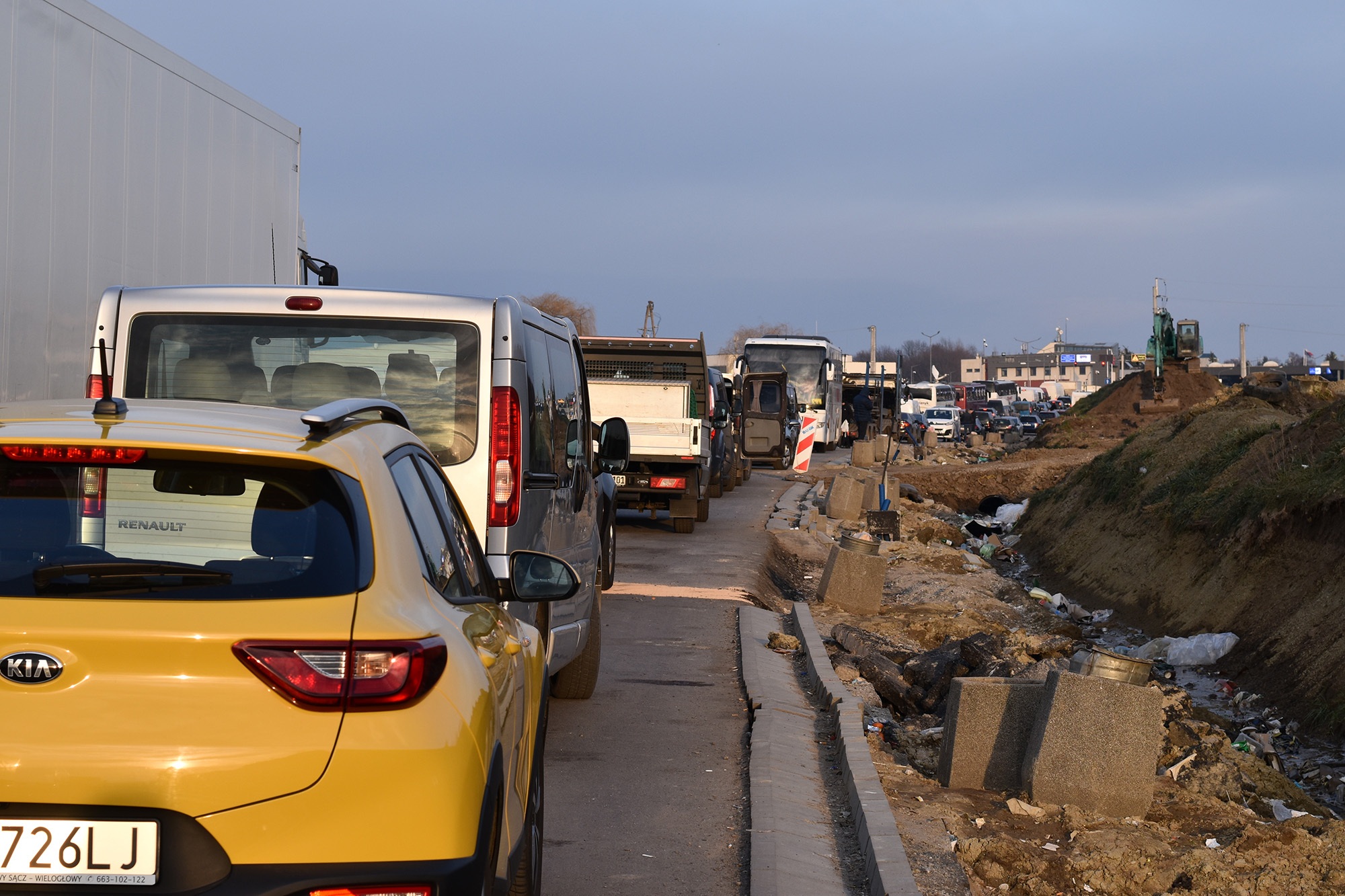 A line of vehicles in Poland approaches the Ukrainian border. Photo by Jenny Lind Schmitt

A young woman pops in the tent to return her paper. She’s ready to move on. Afterward I ask Paul what language they’re speaking. He laughs and says, “It’s a little bit Polish and a little bit Ukrainian. They are very similar languages. And in this region, everybody speaks this mishmash.”

I ask Paul about stories I’ve heard of African and Asian students in Ukraine not being able to cross the border initially. “It’s Russian lies,” he says. “That was never an issue, apart from the chaos for everyone last week. We’re better organized now.”

John and I drive another 20 minutes to Medkya. Police have blocked the road and are directing traffic. John explains in Polish that I’m an American journalist, and I’d like to take pictures. The guard waves us through, but says, “Not for too long.” 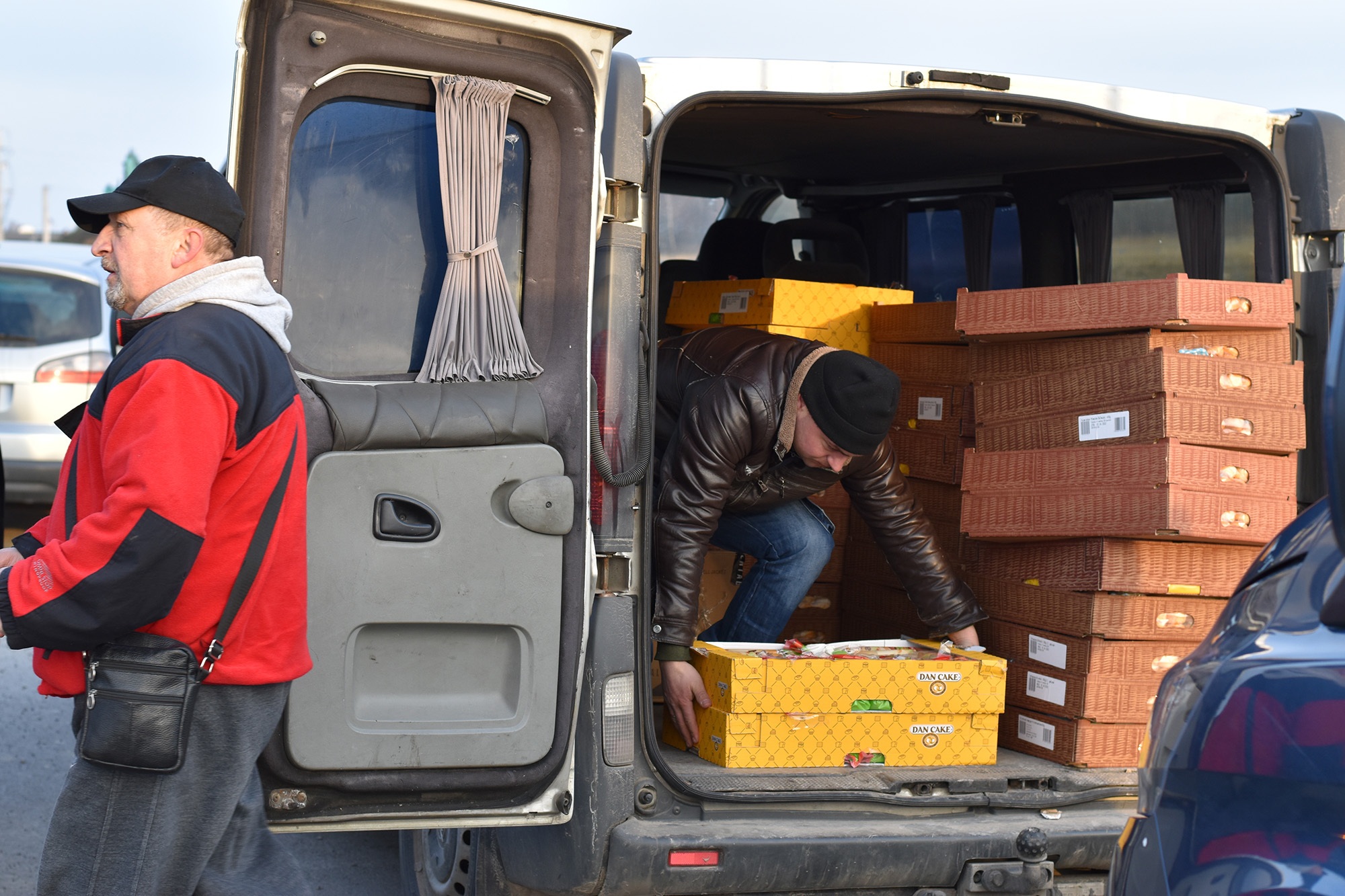 Men transfer supplies between vehicles near the Polish border with Ukraine. Photo by Jenny Lind Schmitt

A little farther down the road, travel coaches, semitrucks, and minibuses are lined up waiting to enter Ukraine. Some have “Emergency Help for Ukraine” posted to their windows in German and English. License plates are from Belgium, Germany, Latvia, Poland, Ukraine, and others. Men move packaged pastries from one van to a larger one. Food, diapers, blankets, medical supplies, and military supplies are going into Ukraine, and those same vehicles will bring back more women, children, and senior citizens. Men of fighting age are no longer allowed to leave Ukraine.

Along the side of the road, we meet a woman with a small child. Her name is Anastasia, and she is from a city north of Kyiv. She says she is happy to talk to me if her 3-year-old daughter can sit in the car to get warm. I tell her she should get in, too, if she’s comfortable with that, and we can talk there. For seven days, they have moved from one place to another in search of safety. They left when shells started hitting residential areas in her city. First, they drove a car to a friend’s house in the country, but then heard tanks were headed to that area. Then they headed towards Chernobyl, where she has family, but gasoline was getting scarce in the center of the country. At some point they took a train. For the last leg, a friend borrowed a car and brought her to the border. He couldn’t cross—he is fighting age.

Now she is going to find a cafe to wait in until another friend from Krakow can pick her up. We offer to give her a ride, and she agrees. She says she works for an international recruiting firm in the IT sector. On the ride, she tells me about her apartment that she bought two years ago. She’s been slowly making it into a beautiful home for her and her daughter. “I built shelves,” she says quietly. “I love books, and I have so many. I’ve been buying them, thinking how I would sit and read them with a cup of tea.” She has everything that she could pack for her and her daughter in 10 minutes in a large blue backpack. “I could only bring one book, and it’s heavy.”

We drop off Anastasia at McDonald’s in the town 10 minutes away where she’s going to meet her friend. I have misgivings about leaving her there: She seems fragile under a veneer of control. I ask if I could pay for their dinner. “No, no, thank you, but no,” she says firmly. “We ate at the refugee center, and I have money,” she insists.

I want to insist too, but decide against it. She’s lost so much; she wants to preserve her dignity, and I want that for her, too. I hope by now she is sleeping soundly and safely at her friend’s house in Krakow. 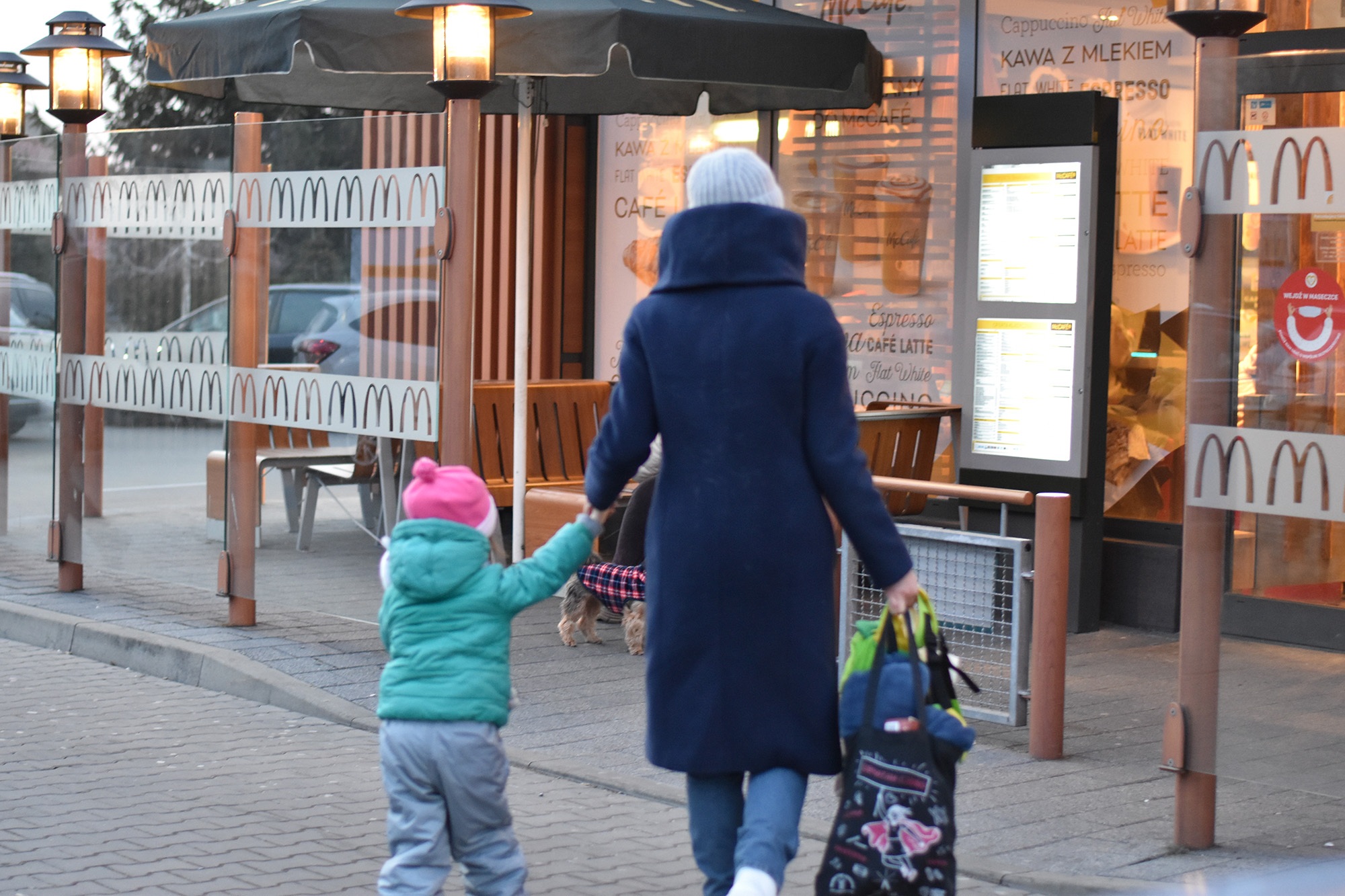 Anastasia and her daughter enter a McDonald’s in Poland near the Ukrainian border. Photo by Jenny Lind Schmitt