In Hong Kong and Taiwan, people gathered to remember the 31st anniversary of the Tiananmen Square massacre

Participants gesture during a vigil for the victims of the 1989 Tiananmen Square massacre at Victoria Park in Hong Kong on Thursday. AP Photo/Kin Cheung

Despite a ban on Hong Kong’s annual vigil commemorating the 1989 Tiananmen Square massacre, thousands of demonstrators streamed into Hong Kong’s Victoria Park to mark the anniversary Thursday. Separate groups also gathered in neighborhoods around the city, in churches, and outside metro stations.

Rather than extinguish the memory of the Chinese government’s crackdown on peaceful democracy protesters 31 years ago, the ban only seemed to provide more reason to remember.

Earlier in the day police had erected barricades around the park and stationed officers nearby. But police did not stop demonstrators from taking down the barricades and entering. At 8:09 p.m., people all over the city lit candles and marked a moment of silence for the massacre’s victims. A few scuffles broke out later between protesters and police in the Mong Kok area. But in general, the night remained peaceful.

Police officially banned the annual vigil—the largest in the world—over coronavirus concerns, although most believe the government had political motivations. The ban came a week after Beijing approved plans for a national security law in Hong Kong that would criminalize what it considers subversion and secession. Many consider this the end of Hong Kong’s autonomy.

While Hong Kong extended its ban on gatherings of more than eight people, churches can meet at half their maximum capacity. Seven Catholic churches held Mass Thursday night, while the divinity school at the Chinese University of Hong Kong held a prayer meeting.

At the high-ceilinged St. Francis of Assisi Church in Hong Kong’s Sham Shui Po district, a projector shined the service’s theme on the wall: “Fear not, God is with you.” Before the event even began, hundreds of Hong Kongers filled the sanctuary, sitting in every other seat due to social-distancing requirements. Dozens stood in the back.

After observing a moment of silence, attendees listened to a message about God’s presence with the Israelites wandering through the wilderness. They prayed for the victims of the Tiananmen Square crackdown, the persecuted church in China, the development of democracy in the mainland, as well as Hong Kong’s own political turmoil.

Holding up small lit candles, participants sang behind their masks to conclude the service. “It’s actually quite sad,” Yaffa Lai said regarding this year’s anniversary. “It seems like society is under white terror.”

In past years the nursing home employee in her 30s attended the annual Victoria Park vigil. But Lai and a friend came to church because of the ban: “June 4 is something we’ve always wanted to vindicate, and we’ve wanted to support those students’ ideals. But it seems like now even Hong Kongers are losing the right to support and commemorate them.”

For seven weeks in the spring of 1989, Chinese students peacefully protested at Beijing’s Tiananmen Square and cities around China calling for democracy, freedom of the press, and an end to government corruption. On the night of June 3, the central government ordered the military to clear the square, killing hundreds or even thousands of protesters and civilians.

In the aftermath, the government arrested student leaders—although some escaped through Hong Kong to the West—and quashed the movement. June 4 has become a sensitive date: The government censored mentions of the massacre and tried to force its people to forget, like a haze of amnesia as thick as Beijing smog. Relatives of people killed at Tiananmen have sought answers and accountability from the government. After 31 years, all they’ve received is tighter surveillance and harassment. 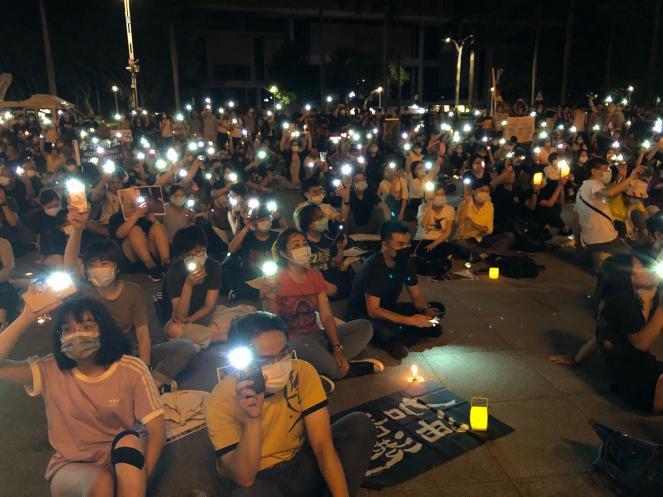 In Taipei, Taiwan, an estimated 3,000 people—including some Hong Kongers—clutched candles in Liberty Square for a vigil on a muggy night. Volunteers checked attendees’ temperatures as they entered. Rather than inviting speakers like in years past, organizers held an open mic for people to share their thoughts. Many connected the massacre with the current situation in Hong Kong.

Holding a homemade flag with the words “Vindicate June 4” and “Heavens extinguish CCP” glued on, Andy Kwok said he remembers watching news of the tanks rolling toward Tiananmen Square as a child. He believes it’s important to commemorate the date because the government never answered for its actions. Instead it continues to punish those who speak about it. Kwok is from Hong Kong, but he and his family moved to Taiwan six months ago partially due to the decreasing freedom in the territory.

He believes Hong Kong is an important example for Taiwan: “China wants to get back Taiwan using lies like ‘one country, two systems,’” Kwok said. “Now Hong Kong proves to Taiwan and the world that this is not working. This is a lie.”