Relearning how to live

Gilgal helps women leaving addiction and homelessness. But some leave before they’re ready, and staff members have to cope with disappointment

In the spring of 2017, a shelter worker handed Rachel Dowdell, 51, a list of recovery programs near Atlanta. “I looked down the list, and I’d heard of all the other places, except Gilgal,” Dowdell said. When she called, case manager Deborah Moore explained that the 12-month program was Christ-centered and for women only. “Her voice is so kind. It’s like she wanted me here,” Dowdell remembered. She agreed to go, but while waiting for an opening, Dowdell relapsed into drug use.

Moore called back three weeks later and asked if Dowdell could come the next day. Dowdell remembers sitting in a friend’s house, smoking, struggling to make herself move: “God was saying to me, ‘Girl, get up.’ The devil was saying, ‘Sit. Smoke. We got more money: Get broke. Stay here.’” She got up from the chair, went to the door, then sat back down. But after a few tries, “I just forced myself out that door, and I never looked back.” She went home, took a shower, and packed for Gilgal.

At Gilgal, women leaving addiction and homelessness can relearn how to live life. But some leave too soon, and others relapse after graduating, leaving the staff in a constant fight with discouragement.

Founder Val Cater did not intend to start Gilgal back in 2005. She was busy shuttling her two kids between activities and managing a business. But one day her husband, a real estate investor, told her about a small house on a dead-end street in East Point, Ga., south of Atlanta. He said, “Val, there’s something totally different about this property. You do counseling for women at church: You ought to think about doing something for women.” Cater resisted initially, but her husband brought it up again, and she decided to pray about it. She told God if He gave her “a sign with neon lights,” she would start this ministry, knowing it was His will.

Soon after, a friend suggested she talk to a woman at United Way. Cater met with the woman, then heard that United Way would give her a grant worth a few hundred thousand dollars to start Gilgal. Cater took that as God’s sign.

“If they stick it out, they always leave in much better shape, spiritually, than when they came in.”

NOW SHE HAS 15 YEARS of stories of changed lives—and some stories of women who failed to change, which usually happens when women leave too soon. Those stories haunt Cater and challenge her to help staff and volunteers deal with the crushing disappointment. One volunteer learned a client had left and immediately burst into tears. “This thing we deal with called addiction is real and captivates a person’s mind,” said Cater. “You can have a perfectly normal conversation with somebody one day, and the next day, everything’s changed.”

The intense ministry all happens within two modest brick houses and one small church building surrounded by tall trees on a dead-end street. The buildings are old but tidy, with flowerpots around the “Gilgal Inc.” sign in front of the church. Gilgal raised money to renovate the building: Now the former sanctuary is a large classroom with sky-blue walls, folding tables, and a large whiteboard. Former Gilgal girls smile in photos on one wall, and hymn lyrics or Bible verses decorate the others. Next door is another large room, full of cubicles for the staff.

One house shares a parking lot with the church building: Women enter Gilgal and spend their first six months in one of the colorful bedrooms. Their days are highly structured: up at 6:30 a.m., Proverbs at 7, praise songs together, then classes from morning through the afternoon. Everyone shares chores like cooking, cleaning, and yardwork.

Across the street is the phase two house, where Diamond the cat often lounges in the front yard. Each lady can choose her own bedroom once she gets a job, and she stays there until she graduates. Ladies in phase two get more freedom, along with classes, chores, Proverbs, and the additional responsibilities of working an off-site job. Those who complete all requirements may graduate. Gilgal has a phase three house, where women who need more time can live self-sufficiently and check in with staff weekly for accountability. 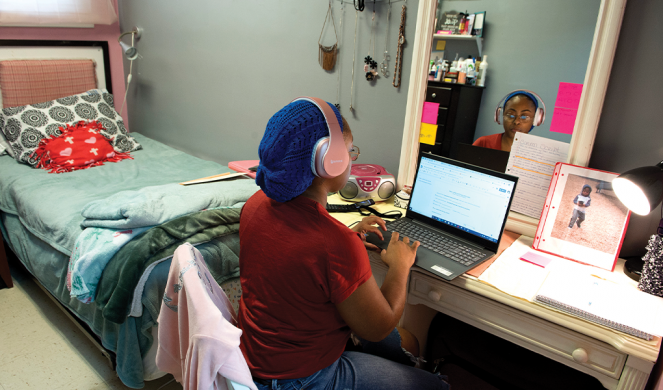 Jasmine T. works for her new job from her room in Gilgal house. Photo by Robin Rayne/Genesis

GILGAL WAS RACHEL DOWDELL’S seventh recovery program. She arrived after years of addiction, street prostitution, and abuse: “I missed my playground, where I did my drugs. I missed my playmates.” During phase one, she remembers lying awake in bed. With no drugs to distract her, her mind raced with worry. She worried that her boyfriend was with someone else. She felt angry at the man who molested her as a child and her father who failed to protect her. She felt guilty for neglecting her five children and breaking her family relationships.

But at Gilgal, Dowdell learned drugs were not her problem: “I was my problem.” Through her friendship with Cheryl McClure, the program director, and working through a workbook called “Be Transformed,” Dowdell learned to give God her anxieties and trust Him for help. She said it took her five months, but “once I realized that I needed God, not a man, to fulfill me, God worked it out, and He got me through this program.”

Dowdell still had a lot to learn, like how to pay bills, keep a job, and deal with painful memories and guilt: “I didn’t know how to live.” She began paying attention in classes, especially “Relapse Prevention” and “Anger Management.” She became close friends with two other women—Lindsay and Latisha—who were also serious about changing. They “lifted each other up instead of pulling each other down.” Dowdell remembers sitting at the kitchen table with them, talking late into the night while other women watched TV.

Dowdell successfully graduated from the program in June 2018.

LATE ONE TUESDAY AFTERNOON in July, Jasmine T.—wearing leopard-print sandals, an orange T-shirt, and blue shorts with pineapples—chatted with founder Val Cater and program manager Cheryl McClure. They asked Jasmine how she was going to dress for an upcoming interview.

“Don’t worry, I know how to represent.”

“I’m going to put it in a bun, and put my black beanie over it,” said Jasmine. “It’s going to look professional. Don’t worry.”

Cater added: “You’re not there for an individuality moment. You’re there because, ‘I’m going to fit in, and I’m going to move up.’” Then she smiled and added, “I do believe in you, and I know tomorrow’s going to be a slam dunk.”

Now, staffers help women set reasonable career goals and account for a spotty employment record and a criminal history. “In a year, you’re not going to get it all,” McClure said. “But we try to get as close to it as we could.” Through partnerships with companies such as Randstad, Publix, Chick-fil-A, UPS, and Waffle House, the staff connects women with positions where they can move up, get experience, and earn a living wage. Gilgal hosts a job fair where the women meet employers and human resource representatives who can answer their questions.

Cater also wants women to learn to have fun without drugs. For that, she asks volunteers to share their hobbies. Volunteers teach Zumba, art, piano, and running. Cater does not let anyone sit out. One woman grumbled about decorating Christmas cookies, but then told Cater, “I didn’t know I could have so much fun decorating cookies. When I go home for Christmas, guess what me and my daughters are gonna do? We’re going to decorate some cookies!” 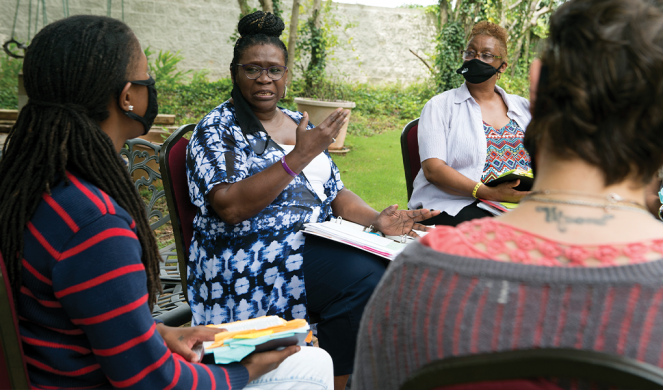 THIS YEAR THE PANDEMIC forced Gilgal into lockdown: No visitors or volunteers were allowed on-site. Pastor Patrick Perkins had led Friday Bible studies for close to a decade before the pandemic hit. After months off, he resumed teaching in late July, by phone. Some things were different: He had no idea how many women were in the room listening, for example. But just like always, the women used the whole time to ask questions. One woman asked him to explain a passage where Jesus called a woman a dog. Another woman wanted to know if she could take communion before getting baptized.

Perkins said their spiritual hunger encourages him: “If they stick it out, they always leave in much better shape, spiritually, than when they came in.” When new women leave within a couple of months, he says, “There’s a good chance they’ll end up in another rehab place again.”

AFTER GRADUATING and working elsewhere, Rachel Dowdell became one of Gilgal’s residential managers. The first few months were difficult: Dowdell wanted to impress Cater and McClure and wanted the program residents to respect her. But the women manipulated her, and she grew angry at them and ended up crying each night: “I wanted to command them to do what I wanted to do, not look at their hearts, not be a shepherd.” Through listening to Cater and McClure and giving her problems to God, Dowdell learned to adjust her attitude in the work: “Now when I come to work, I’m grateful that God chose me to be here.”

Case manager Deborah Moore said the hardest part of the job is when women don’t get it and leave the program too soon. She asks herself, “Can I do more? Am I doing enough?” To keep from discouragement, Moore remembers her own story.

She was homeless when she entered Gilgal’s program in March 2008. She’d been on drugs for about 25 years, starting at age 16. On the outside, she appeared to be growing at Gilgal. “I could follow directions. I could be nice ... but there was no change happening inside of me,” she said. “I didn’t put in any work.” Moore graduated with a nice job and a savings account. But one day instead of taking the westbound train home after work, she took the eastbound train back to her old neighborhood, where she relapsed.

In October 2009, she was back to Gilgal. Moore remembers saying, “OK, Lord, I don’t know how this is going to work, but I’m willing to try it one more time.” She told herself she had to choose: either get this program right or become a full-fledged drug addict: “From that day, everything changed. … I became willing. I surrendered.” She graduated from Gilgal for the second time in 2010 and began working there the following year. In October, she will have been sober for 11 years.

Now as Moore sees women quit the program or leave Gilgal and relapse, she remembers that she cannot save them: Only God can. “We talk and we talk and we talk, but sometimes He wants us to get out of His way. … It’s a tough balance,” she said. “Something has to happen for them to be ready. There has to be heart change.”