Albert Kovatch looks at the damage to his home from Hurricane Ida in Grand Isle, La. Scott Clause/The Daily Advertiser via AP

For hard-hit Louisiana, hurricanes have become a bad habit—easy to acquire, difficult to shake. And when a Category 4 version decides to make landfall on a Katrina anniversary, the parallels can be painful.

“I was six weeks without power and water after Katrina, using the neighbor’s hose for a bath,” remembered Debra McLean, a Tangipahoa, La., resident. Standing Tuesday beside demolished family headstones in the town cemetery, she feared Hurricane Ida has dealt her a similar blow.

“This may be worse,” McLean admitted, pointing to massive trees that withstood Katrina in 2005 but lay toppled by Ida’s winds. That morning, McLean drove roads cleared for single-lane usage to a FEMA distribution site where she hoped to get some of the promised water, tarps, and ice. A miles-long line turned her back. “We don’t have power. We don’t have water, and they’re saying it might be weeks before we do.”

Tangipahoa Parish is an hour north of Port Fourchon, La., where on Sunday Ida became the fifth-largest hurricane to make landfall in the United States. After spinning up the Eastern Seaboard, it claimed more than 45 lives with floods and cyclones, leaving billions of dollars’ worth of damage. Flooding continued to be a threat along Ida’s path. Thousands of people had to evacuate their homes or underwent water rescues Wednesday and Thursday as Ida made its way into the northeast United States. New Jersey reported 25 Ida-related deaths. 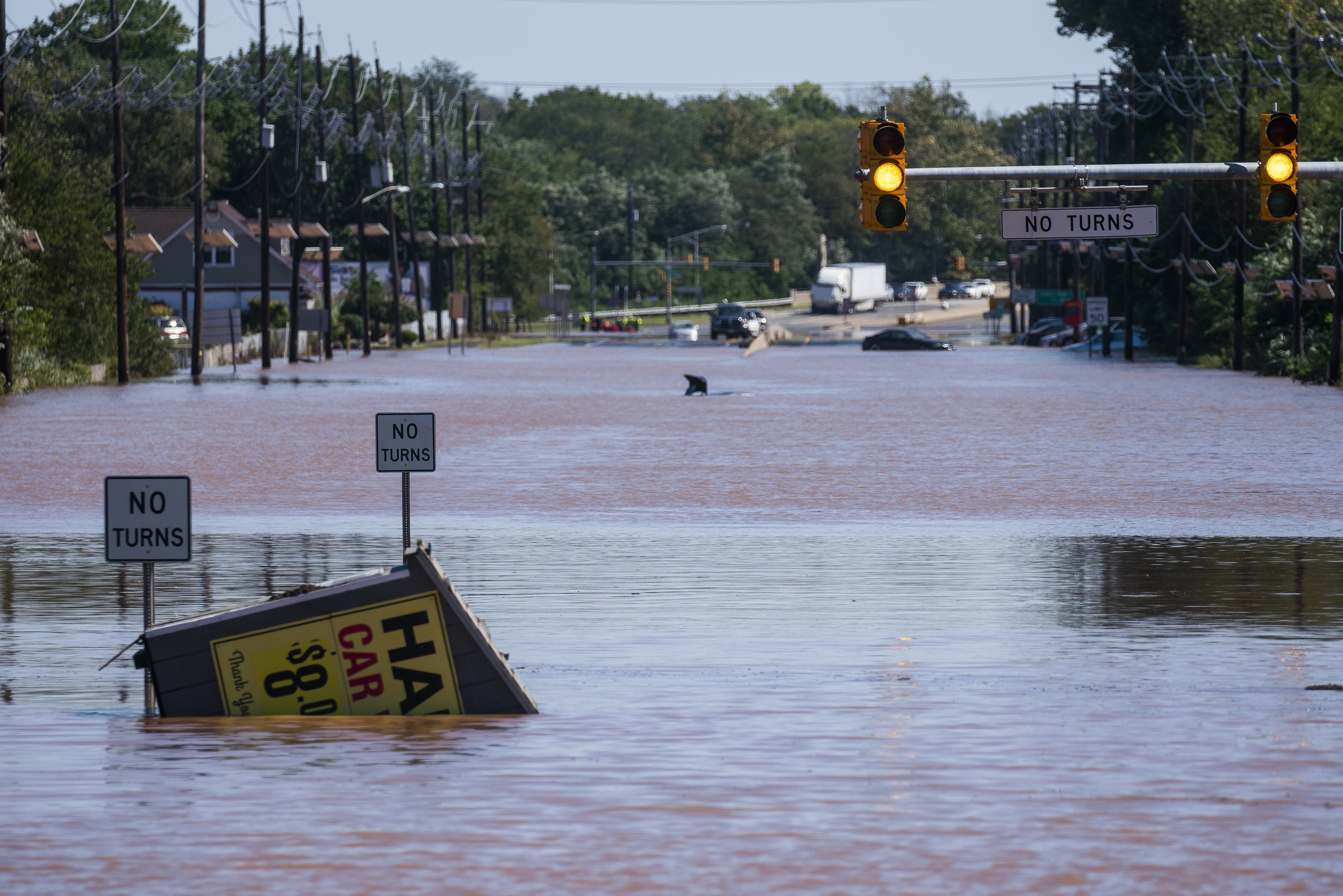 In Louisiana, Ida’s 150 mph winds wreaked havoc on the power grid. Officials at Entergy, the region’s main electricity provider, have called in an additional 20,000 crew members to address damage to equipment affecting nearly a million customers. They warned outages could last as long as three weeks in some areas.

Two deaths Tuesday underscored the danger associated with the task of restoring power: A pair of workers contracted for Ida assistance died from electrocution while repairing lines in Alabama.

That same day, Louisiana Gov. John Bel Edwards surveyed Ida’s effect on cities like Houma, a place where pieces of peeled metal roofing covered the sidewalks instead of buildings.

“It’s like a bomb went off,” said Michael Cobb, taking in the destruction from his downtown front porch.

Edwards advised evacuees to stay away until officials deem their communities safe. Jamie Dew, president of New Orleans Baptist Theological Seminary, offered similar advice to students and faculty wanting to return, suggesting they plan to be displaced from the campus for up to three weeks. He later warned that New Orleans had closed access points to the city.

In response to Hurricane Ida, the National Guard deployed more than 5,000 troops to help with search and rescue operations, as well as food and water distributions. Drivers of semi-trucks from a Shreveport unit fueled up at the Quick Way in Arcola, a station depleted of gas but not of diesel. Walking between pumps and the cashier inside, their commander reported they earlier dropped four truckloads of MREs and four truckloads of water further south in Hammond, and they were headed to resupply. “We’re trying,” he nodded. “We’re trying.”

Bagged pump handles at empty gas stations lining evacuation routes continue to frustrate customers days after the storm, making gas scarcity a defining Ida impact. An evacuee from Loranger with two toddlers in her backseat waited in lines near Roseland: “I’m almost on empty. I’m out of money. I don’t know what I’m going to do.”

But finding gas isn’t her only problem. She said the hotel she booked provides water and electricity only when the facility’s generator is scheduled to run. “They cut it on long enough for us to take a cold shower real quick and flush our toilets, then I fill it back up so that I can flush the toilet throughout the day.” 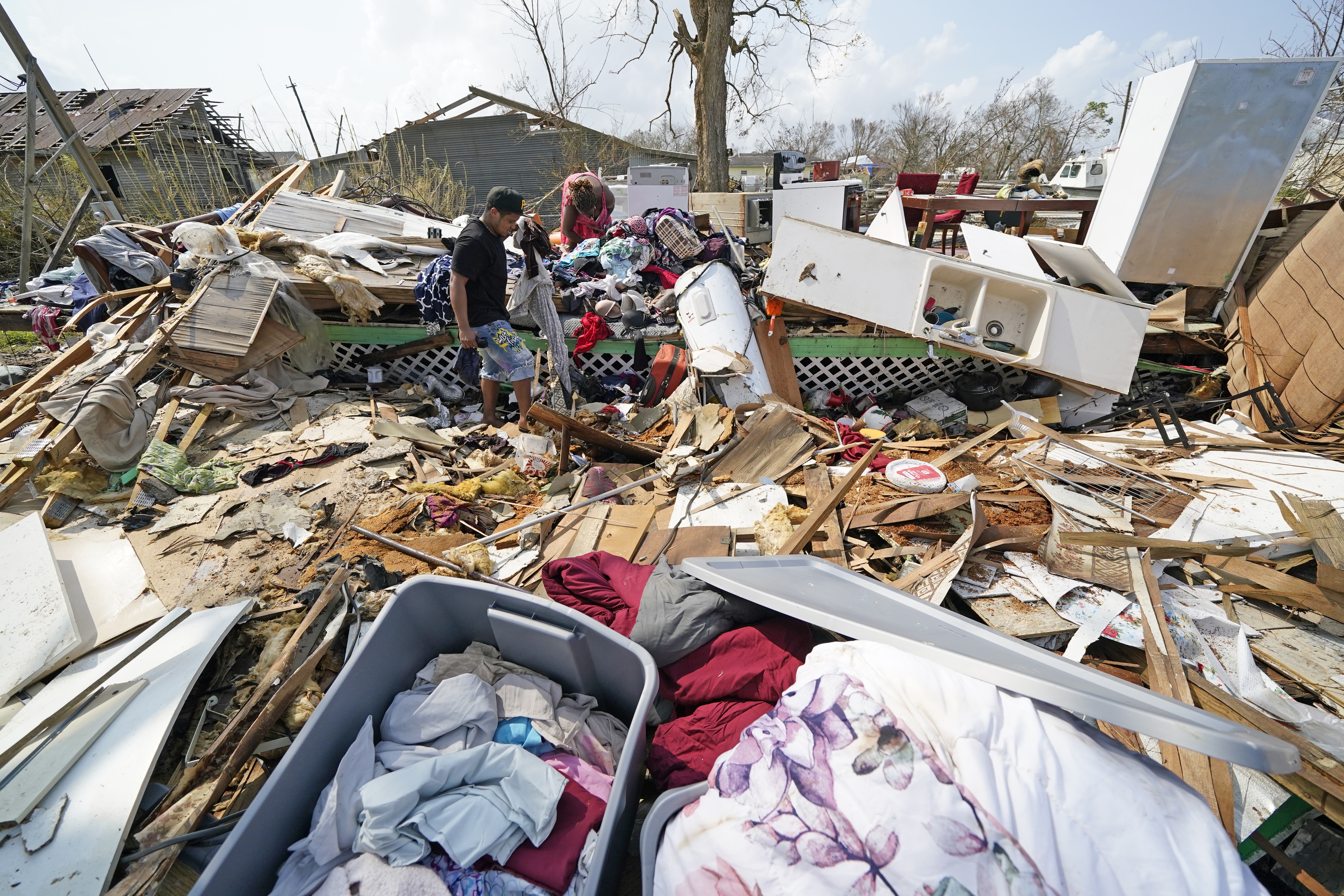 Signage near Amite lay flat on the shoulder of Interstate 55 alongside huge pines, downed by winds and cut in half by emergency workers. Sagging power lines and tree debris made some city streets in Amite impassable. Road closures and cell signal problems have hindered relief efforts.

Even so, Samaritan’s Purse had program managers in Houma, Metairie, and Hammond, according to vice president of North American ministries Luther Harrison. They’ll invite volunteers to join them when Louisiana’s emergency management officials say it’s safe, and homeowners must also be present to give the organization permission to help.

Luther said three disaster response trailers are in Louisiana. The trailers are fully equipped with tools and other equipment, along with shower trailers, kitchen trailers, and skid-steer loaders. “We bring a generator unit with us that can power a host church’s air conditioning and refrigerators. We can use their facility as our base. It gives our volunteers a good place to eat, a good place to sleep, then they can go out and serve the next day.”

Luther pointed out this is only the first major hurricane of what it expected to be an active year.

For Roseland town clerk Patra Rankins, that’s more than she can think about right now. Her thousand-member community is without water and electricity, and daily temperatures are miserable. So is her office, lit only by a window and the glow of her phone. Rankins is concerned about how the elderly are faring and what the fire department will do if called to a blazing building. But it’s a calm, steady concern. She’s not overwhelmed.

“The great thing about this community is that we all trust God. We all believe in God. And we have faith that through God, we will make it through.”

Thank you for covering the lower portions of the state that were devastated by the storm. So many news outlets are just talking about New Orleans. New Orleans was hit, but the lower parishes are far, far worse. They badly need relief, and people need to be told.