Author and journalist Johann Hari was increasingly disturbed by what he saw in his godson Adam. As an inquisitive, lively 9-year-old, Adam had developed a consuming interest in Elvis, to which his godfather happily contributed recordings and videos of the King in action. But as a teen Adam had become moody and withdrawn, spending hours every day swiping on his phone. Hoping to reconnect, Hari suggested a visit to Graceland.

The trip failed, in that Adam never came out of his electronic funk. But even grown-up tourists seemed more entranced by their devices than by what was right in front of them. Hari recalled one visitor so impressed by an app’s ­ability to present a room in simulated 3D that he barely noticed the room. In the same way, tourists at the Louvre pushed to get a front-row view of Mona Lisa, only to turn their backs for a selfie rather than use those few precious ­seconds to study the painting itself. 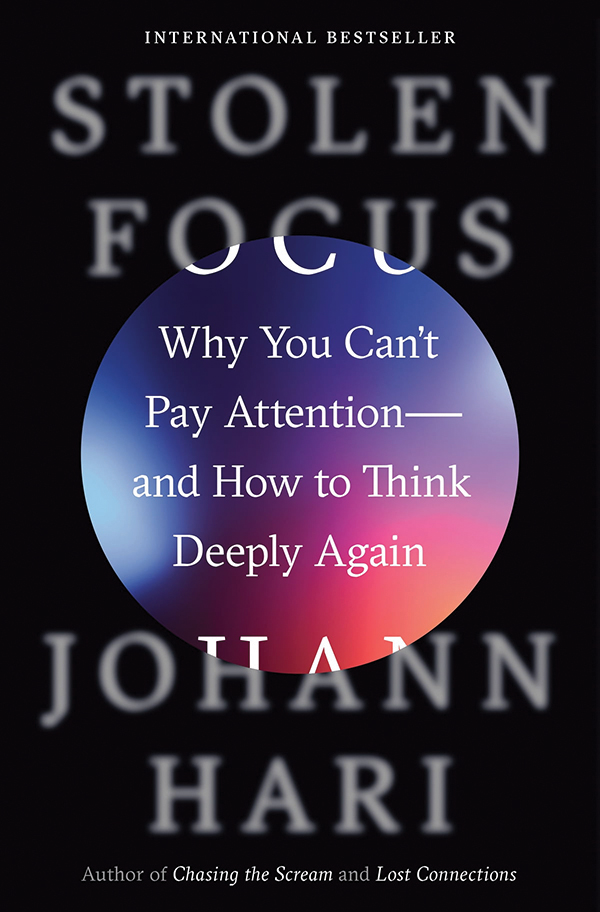 What’s wrong with us? Hari wondered. Why was his own attention span shorter, and why did he spend more time composing snappy rejoinders on Twitter than thinking them through? Was it just him, or were subtle forces outside his control working to undermine his ability not only to focus but to think?

As Mark Twain said about the weather, everyone seems to be talking about the detrimental effects of social media, but nobody does anything about it. Stolen Focus: Why You Can’t Pay Attention—and How To Think Deeply Again (Crown 2022) is Johann Hari’s attempt to do something.

His first inclination, as for many who find themselves in the grip of an addiction, was personal resolve: swearing off all online interaction and renting a cottage in Provincetown for months of reading and reflection (and writing that novel). After a rocky start, he regained much of his ability to focus, but a retreat to the beach wasn’t a long-term solution. Besides, he realized, smartphone domination is a social problem, not just a personal one. A social-media fast may benefit the individual, but not help an ailing culture whose attention is fragmented and unmoored from reality.

We didn’t lose our focus, Hari asserts: It was stolen from us by Silicon Valley purposely designing products to keep us restlessly scrolling. “Your ­distraction is their fuel,” according to one former Google engineer. After interviewing executives, psychologists, academics, and tech experts all over the world, Hari isolates 12 causes of fractured attention, from the increasing speed of our culture to the cosseting of our children. All of these combine to create, in the words of MIT professor Earl Miller, “a perfect storm of cognitive degradation.”

A distracted nation does not bode well for the future, but Hari’s proposed solutions veer from practical to boilerplate progressive, such as favoring unions over free agency, fretting over climate change, advocating for a “living wage,” and abandoning economic growth in favor of a “steady-state economy.” But readers can be skeptical about some of his conclusions while acknowledging his central argument. And while individual resolve is not the only answer to a social crisis, his suggestions for recovering ­personal focus are helpful.

Though conservatives may disagree about government action, Christine Rosen argues for it in a recent National Review piece titled, “Ban Kids From Social Media.” She writes, “The law is a blunt instrument for solving complicated social problems, and yet sometimes it is the only one at hand.” She advocates laws limiting social-media use to adults.

But adults are not immune to the ill effects of stolen focus. A cognitively degraded society will face untold challenges in the coming years. Stolen Focus is a thoughtful attempt to alert us to the problem and offer ways to solve it, or at least talk about it.