Swiss sawmill is a part of this intensely French project

When Gauthier Corbat studied art history as a university student, he had no idea his most important brush with the subject would be in tending the family sawmill and preparing beams to rebuild Paris’ Notre-Dame Cathedral.

The 36-year-old Corbat works for Groupe Corbat, a third-generation sawmill in Vendlincourt, Switzerland, two miles from the French border. The day after the April 2019 fire that destroyed the roof of the historic church and its famous spire, Corbat heard a spokesman for the French wood industry offer oak for the rebuild and decided he also wanted to participate.

It wasn’t easy—after French President Emmanuel Macron’s promise to rebuild the cathedral in five years, the project became a matter of French know-how and national pride: Leaders refused offers of century-old oak from other nations. That dashed Corbat’s hope of oak from his native Swiss region of Jura being part of the cathedral.

Still, since a large number of Corbat’s employees are French, he continued to pursue a role in the project. It paid off, and the Rebuild Notre-Dame de Paris chose Groupe Corbat as one of 40 sawmills—and the only one outside of France—to prepare the 1,500 beams needed for reconstruction. 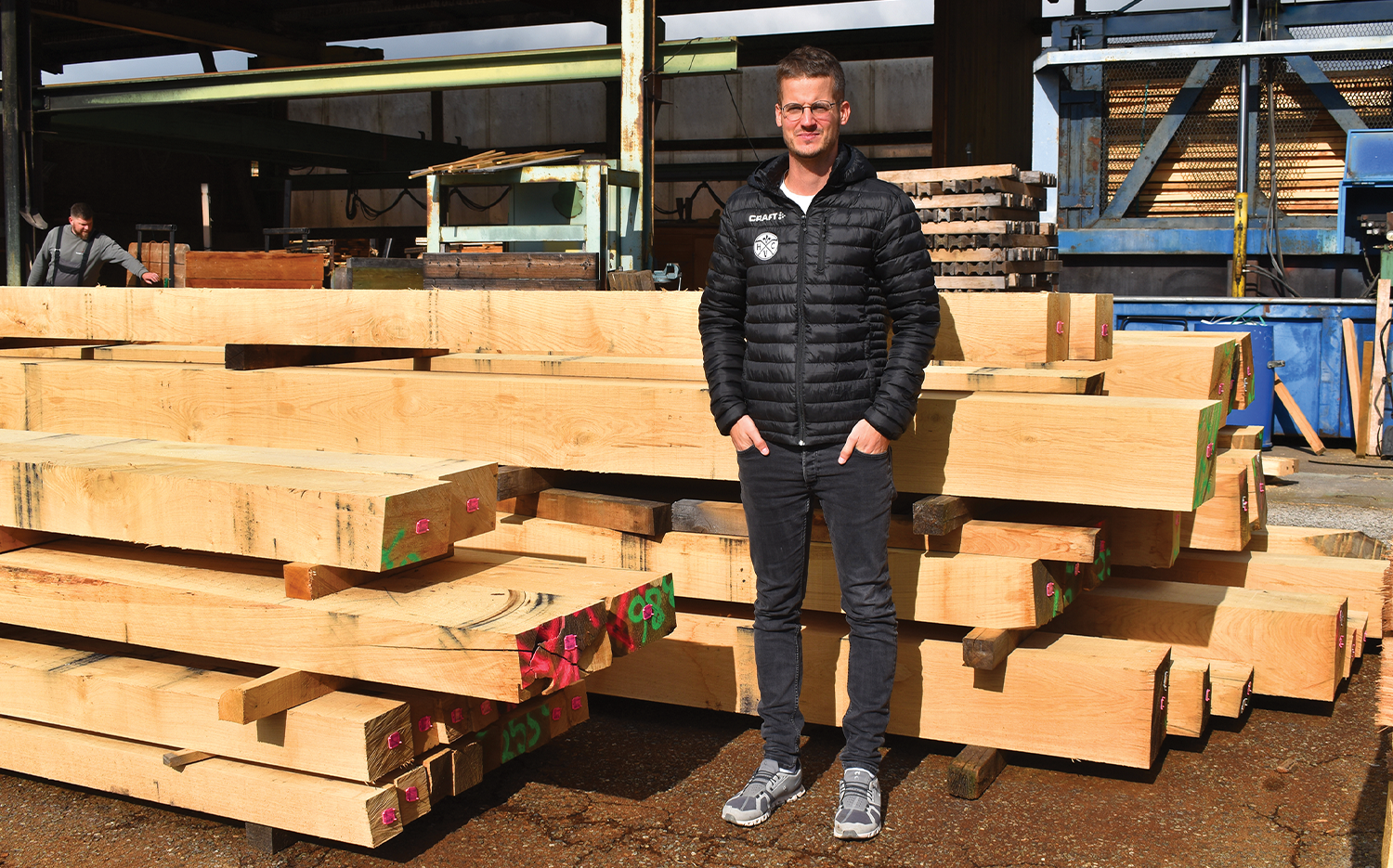 Corbat’s background gave him insight into what was needed to rebuild properly. “When President Macron said they would rebuild quickly, I said, yes, but if they want it with wood, it takes time!” says Corbat. “I think he also eventually realized that with wood it will take longer than expected, and he needs to be re-elected if he wants to see it as president.”

Planners expect the cathedral to reopen in 2024.

Notre-Dame’s original beams were from 1,000-year-old oak trees. There’s not enough of that left in France, but the oaks now being cut are still 100 years old. Project directors in Paris chose the trees from forests in every region of France. They had to be at least 60 cm (24 inches) in diameter, straight, and without knots, and also had to be long enough from which to cut six-meter (20 feet) long pieces.

Corbat says that France is the only country capable of providing so much high quality oak because of its historically strong culture of oak forests. In October, loggers cut chosen oaks in the French region just across the border from Vendlincourt and brought them to the Corbat sawmill to be worked.

While the Corbat sawmill is the only one in Switzerland that could do this work—it’s equipped to cut hardwoods like oak and beech; other Swiss mills specialize in soft woods like pine and cedar—the size of the logs pushed the team to its limits. The support structure for the 13-foot-high industrial band saw was barely long enough. The beams are twice the length of those the mill usually cuts, and each finished piece weighs between 650 and 700 pounds.

Cyril Drossard, who is French and has commuted across the border each day for 15 years, cut the 25 timbers destined for Notre-Dame’s spire. His work uses his ears as much as his eyes: If the saw begins to “sing,” he knows something is wrong. “The work wasn’t more complicated than usual,” says Drossard, “but I knew I had to cut it just right, and that was a little nerve-wracking.”

The cut timbers will dry for a year in the middle of the mill yard. The freshly cut wood smells sweet, like tobacco and vanilla, and each has a pink plastic tag with a bar code denoting which forest it came from and where in the church the piece will end up. After a year, carpenters will bring the well-seasoned timbers to Paris where they will be fitted directly into place in the cathedral.

Corbat gets emotional when talking about being a part of something this historic. For him it’s an honor, but also a responsibility to carry on the legacy of planting trees.

“The oak forests were planted in the 17th and 18th centuries. Those people planned beyond their own lifetimes, knowing the next generations would want this wood. It’s exactly what we needed for the cathedral, so it’s important that we keep replanting and carry on this tradition.”