The United Kingdom said goodbye to its beloved queen in a state funeral on Monday. Tributes to Queen Elizabeth II have called her a rock, steady presence, and shining example of grace in tumultuous times. The values espoused by the world around her changed drastically during her 70 years on the throne, as evidenced by the troubles within her own family.

View a slideshow of pictures from Elizabeth’s life below. 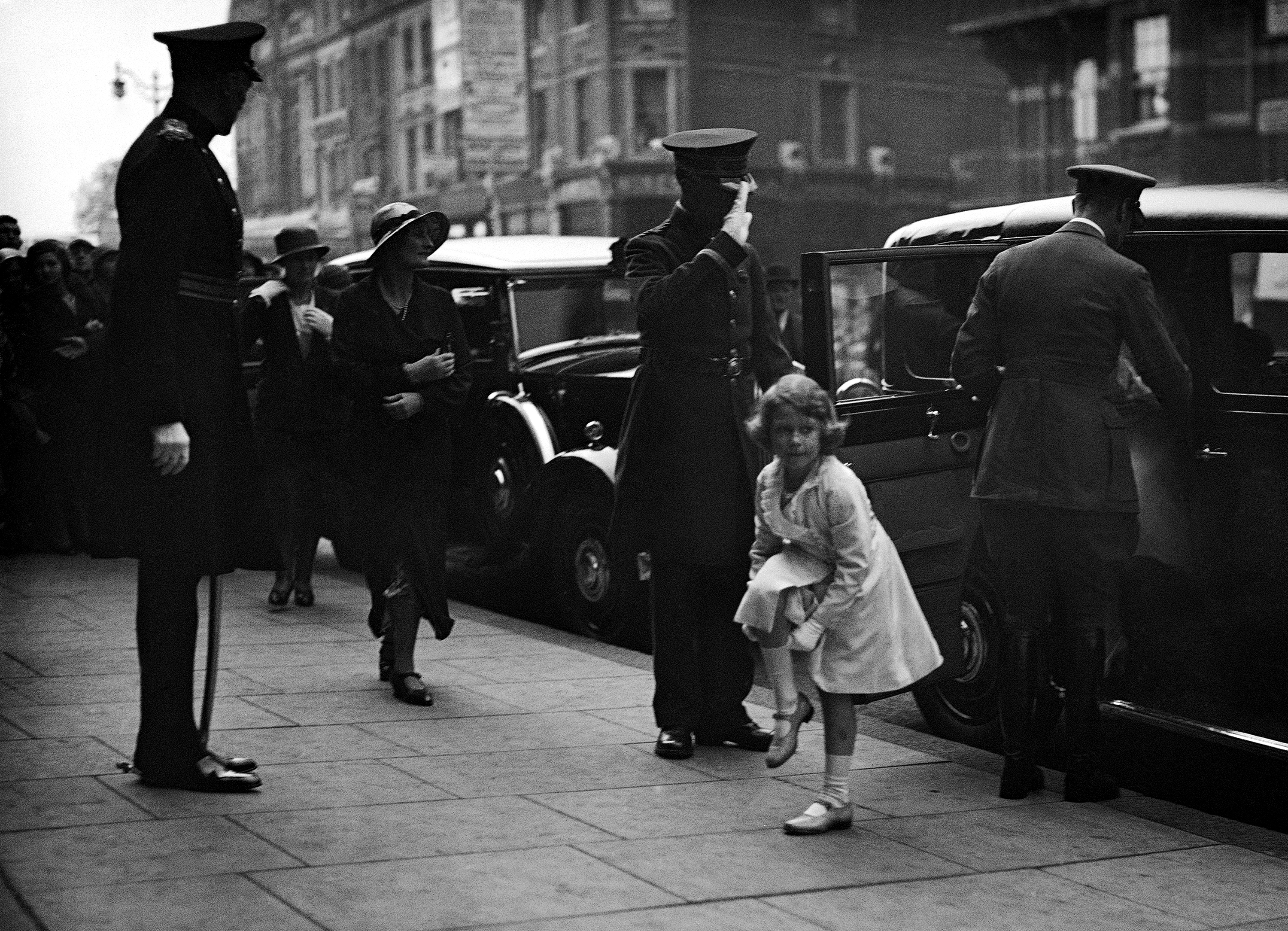 Princess Elizabeth Alexandra Mary Windsor was born on April 21, 1926. At the time, she was third in line to the throne behind her uncle, Edward, and her father, George. She likely never imagined she would become queen of England one day. She spent much of her early life between her London home and her family’s lodge in Windsor. In this photo, taken in London on May 30, 1933, the 7-year-old princess pulls up an errant knee sock, unconcerned with the public decorum that would characterize much of her life. (AP Photo) 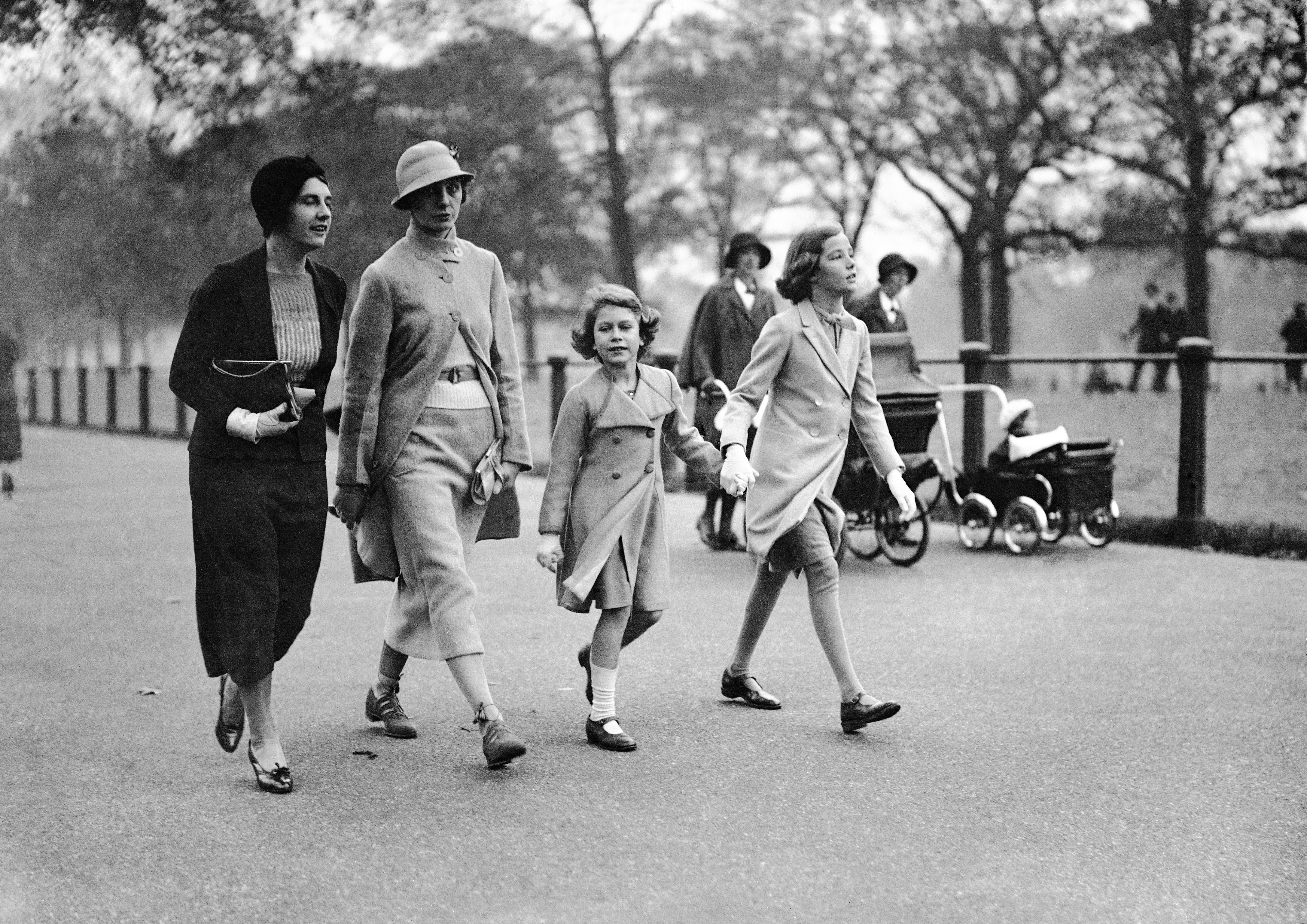 The princess enjoyed a fairly normal childhood. In this photo, taken on Oct. 26, 1934, she strolled freely through Hyde Park with a friend and nannies, unbothered by bodyguards or escorts. (AP Photo) 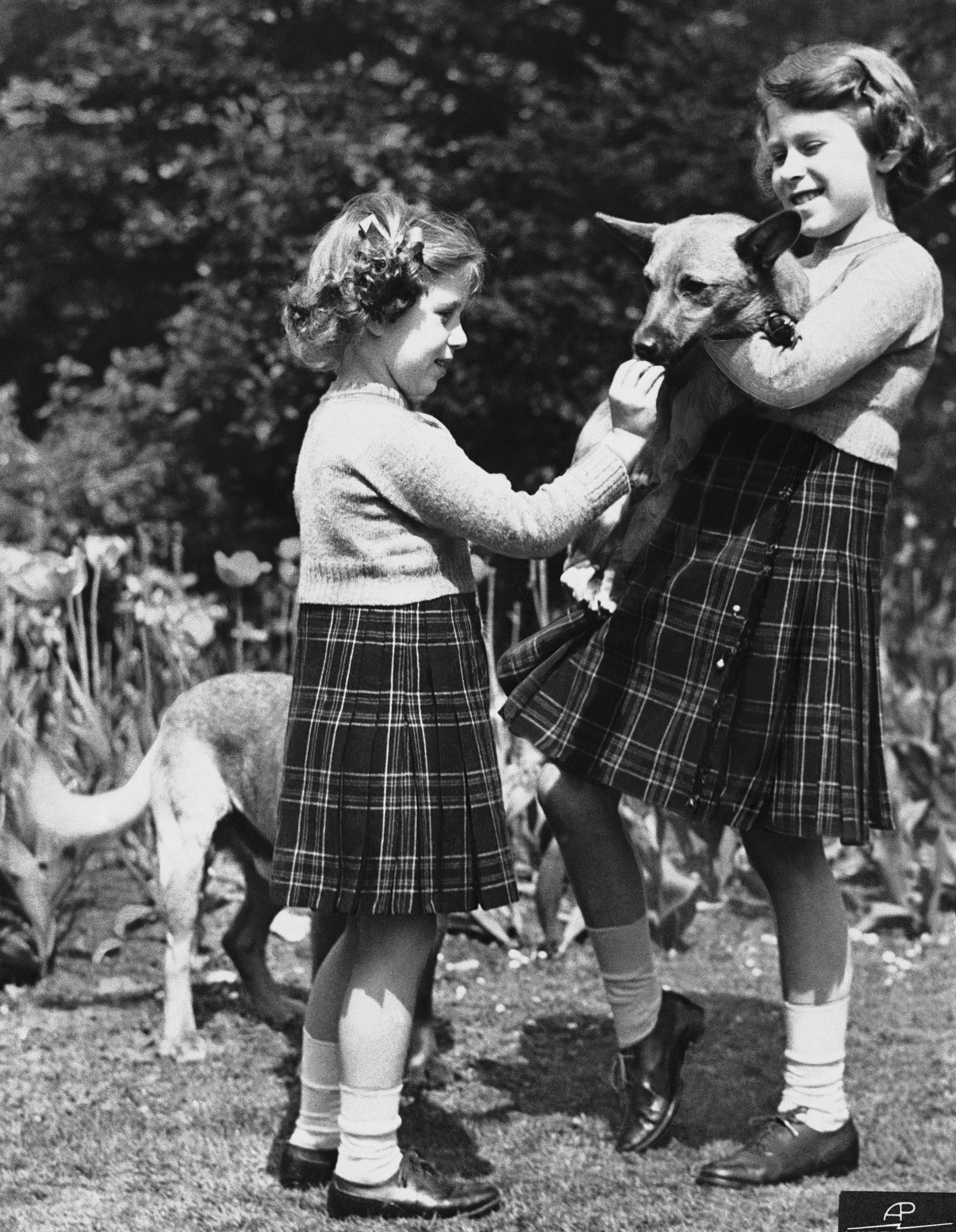 Throughout her life, Elizabeth owned more than 30 corgis. She developed a fondness for the breed as a girl after her father brought one home as a gift for his two daughters. In this photo, taken on July 5, 1936, Princess Elizabeth holds a corgi affectionately named Dookie, while her sister, Princess Margaret Rose, gives him a treat. (AP Photo) 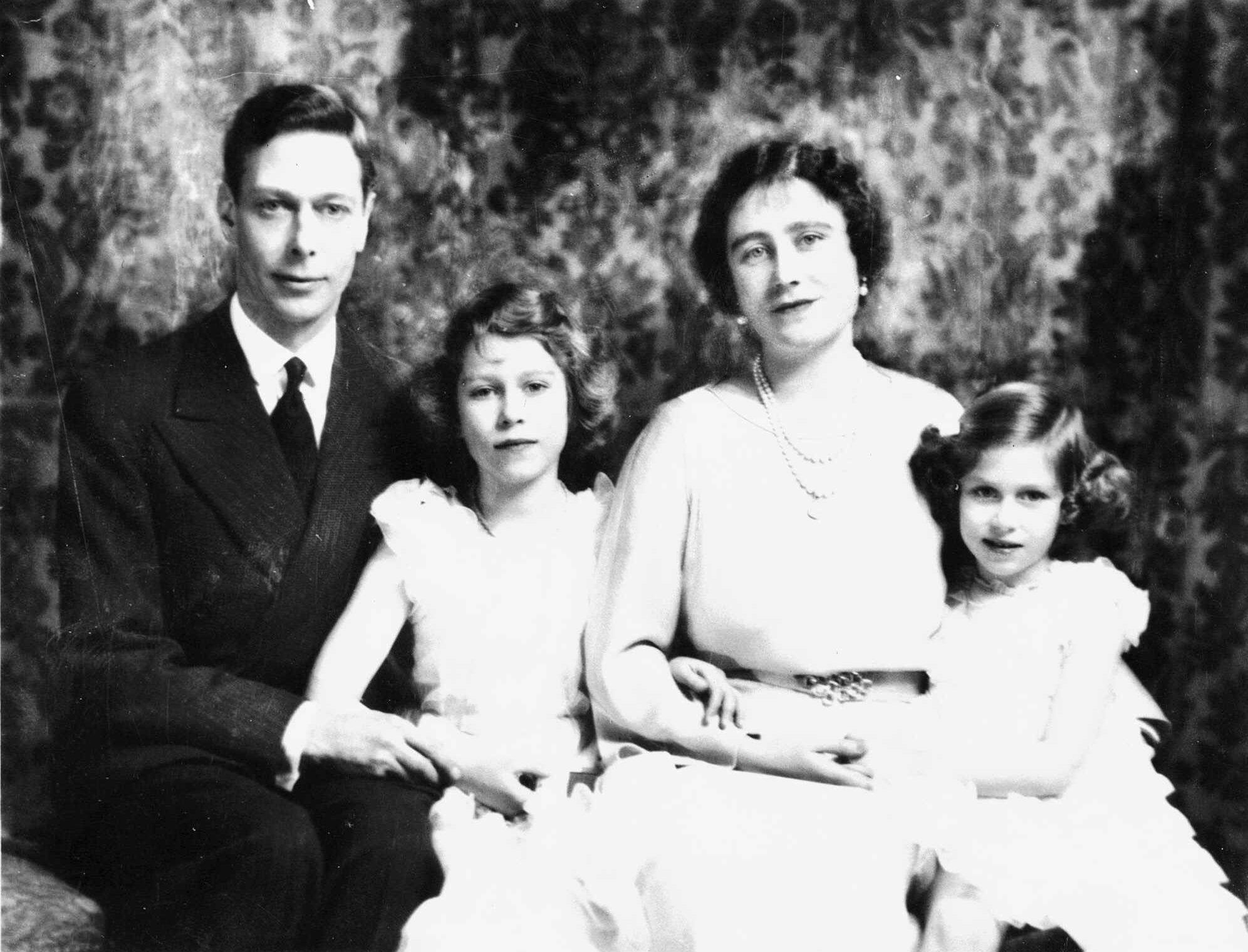 Six months later, in December 1936, Elizabeth’s uncle, King Edward VII, abdicated the throne to marry a divorced American, Wallis Simpson. As the official head of the Church of England, the king was not permitted to marry a divorced woman. Many viewed the king’s decision to put his own desires over the good of his family and country as a shocking disgrace. Edward’s abdication propelled Elizabeth’s father to the throne and made her the heir apparent. King George VI reigned from 1936 to 1952. He proved a model of courage, overcoming a debilitating speech impediment and leading England through World War II. This photo of the family was taken in 1937. (AP Photo) 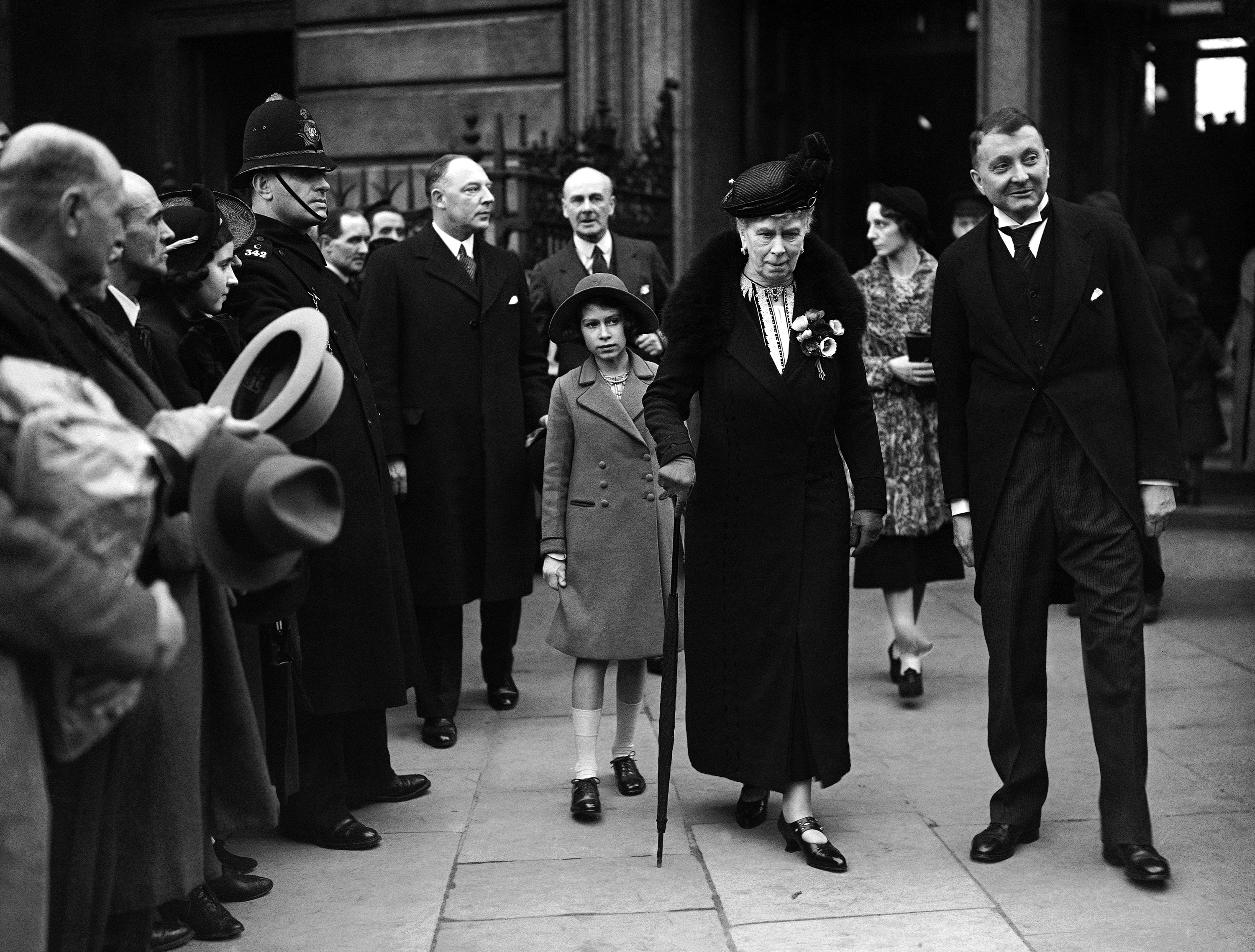 Though educated at home under the supervision of her mother, Elizabeth was tutored by Henry Marten, vice provost of Eton College, and the Archbishop of Canterbury. In addition to her lessons in Latin, religion, and a variety of other studies, Elizabeth enjoyed weekly trips to museums, often accompanied by her grandmother, Queen Mary. Photographers captured this visit to the National Portrait Gallery on March 28, 1938. (AP Photo) 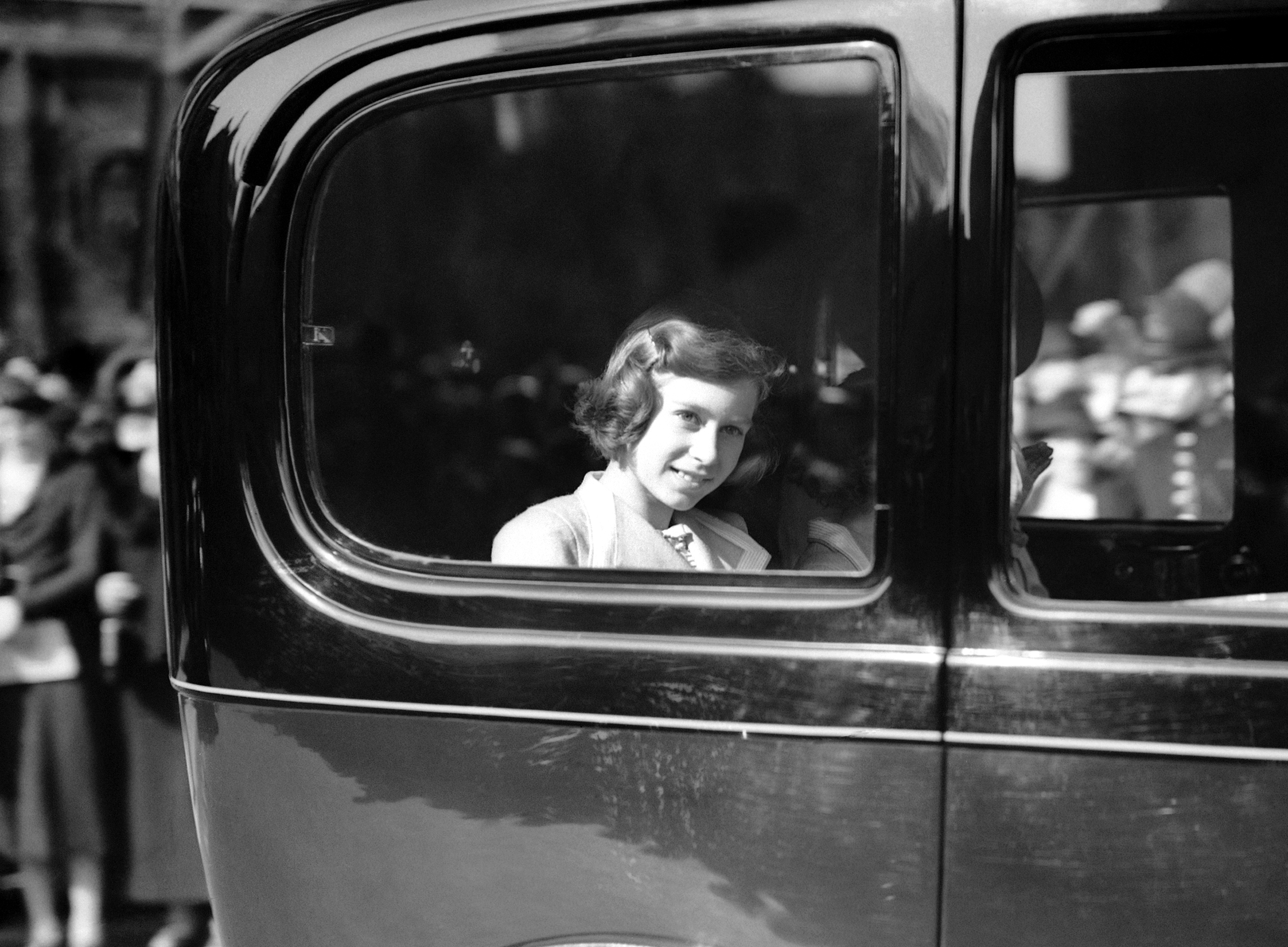 After becoming the heir apparent, Princess Elizabeth made an increased number of public appearances. This photo was taken after she left a festival event held at the Royal Albert Hall in 1938. Once Britain entered World War II, she and her sister moved to the family’s Windsor home. Even though removed from the public eye, she continued to communicate with her future subjects. In 1940, the 14-year-old princess spoke to the nation via radio broadcast. (AP Photo) 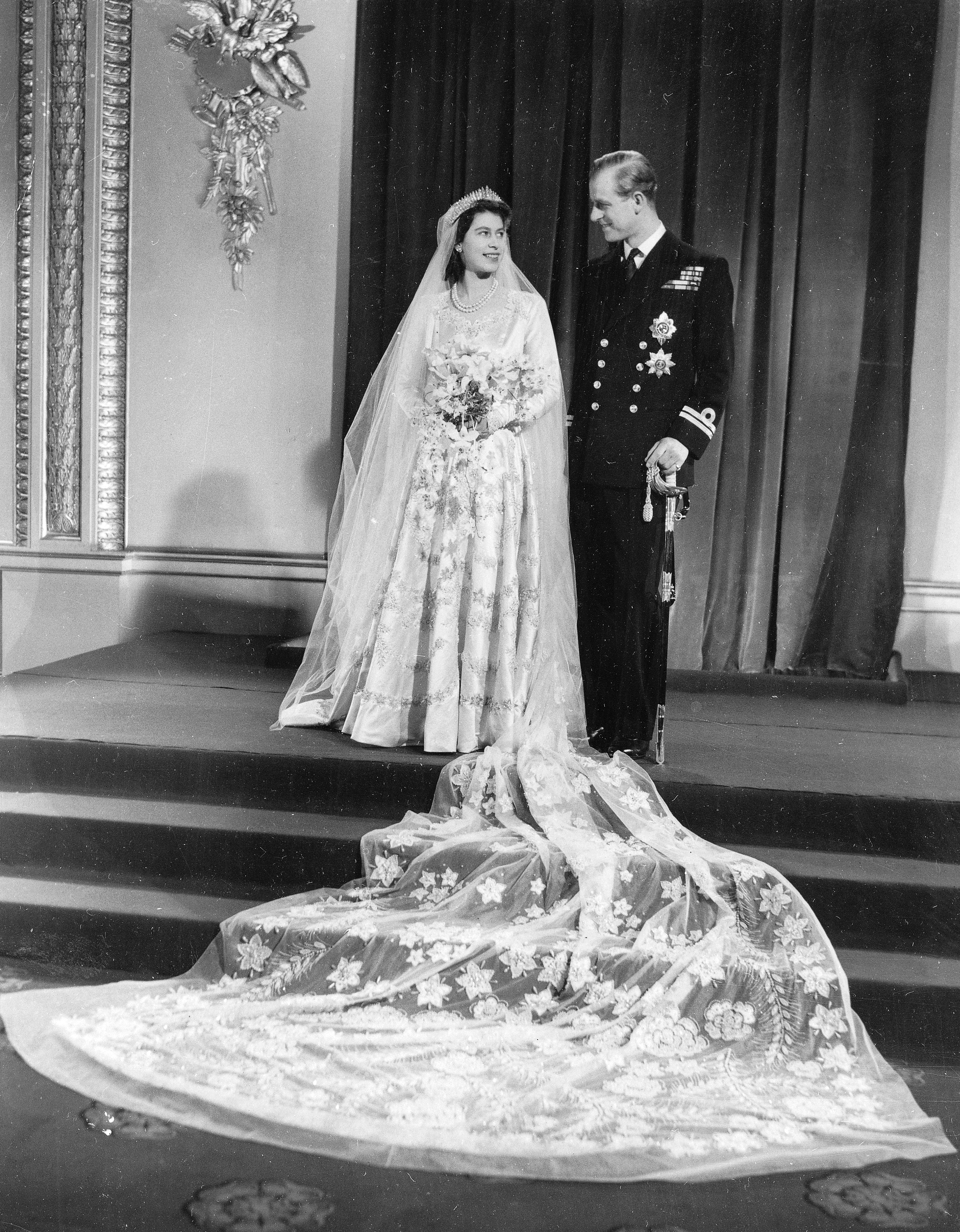 On Nov. 20, 1947, Princess Elizabeth married Philip Mountbatten, a former prince of Greece and Denmark. They were second cousins once removed and met for the first time as children. Elizabeth later said she fell in love with Philip when she was just 13 and they began exchanging letters. She was 21 when they got engaged in July 1947. Their marriage lasted even longer than her reign—73 years. (AP Photo) 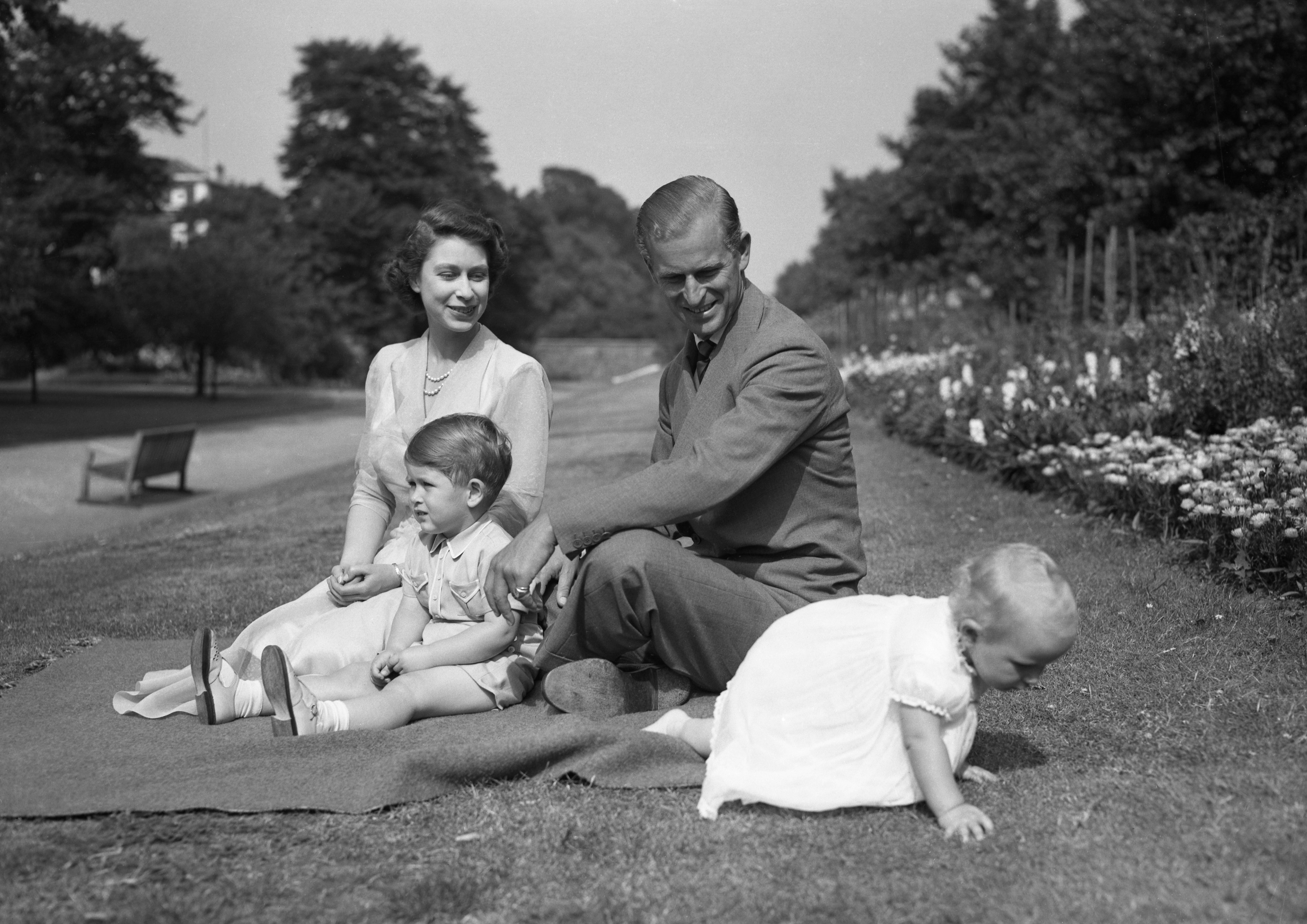 Elizabeth had her first child, Prince Charles, on Nov. 14, 1948. Princess Anne was born two years later, on Aug. 15, 1950. While Elizabeth's father still reigned, Philip continued to serve as a Royal Navy officer and spent several months stationed in the British Crown Colony of Malta. During his time in Malta, Elizabeth traveled with him while the children remained in England. The young family posed for this photograph in London on August 8, 1951. (AP Photo/Eddie Worth) 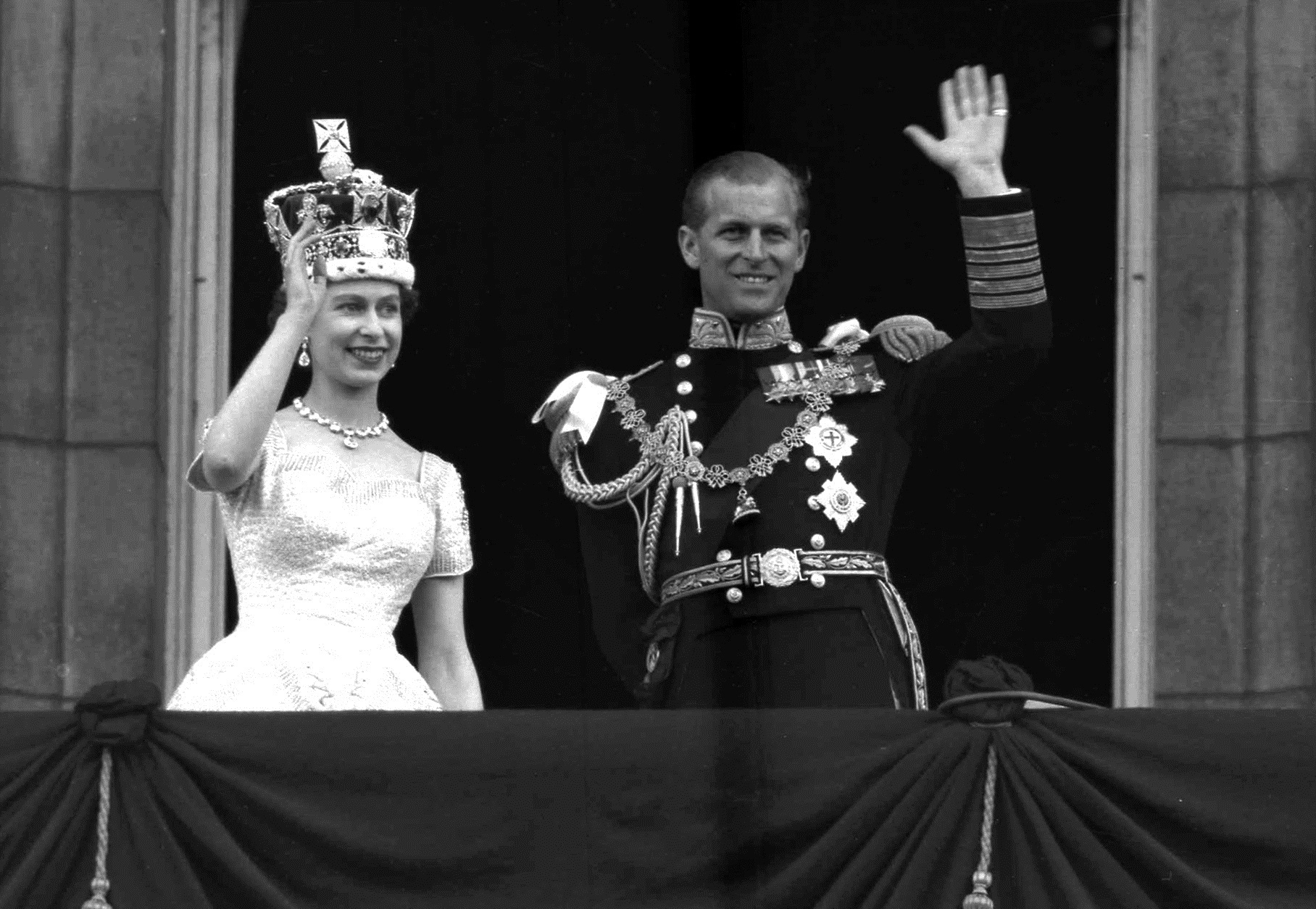 Elizabeth became queen when her father died on Feb. 6, 1952. But her official coronation did not take place until June 2, 1953. In a first for the modern age, the ceremony was televised, except for the anointing and communion. It was the first of many royal events during Elizabeth’s reign shared with her subjects—and the rest of the world—through modern media. Much of her family’s life would play out in public on the front pages of newspapers and later the internet. Intense media scrutiny offered royal-watchers a front-row seat to the painful disintegration of Windsor family ties through the next seven decades. While the queen modeled decorum, dignity, and traditional morality, her children famously flouted it. (AP Photo/Leslie Priest, File) 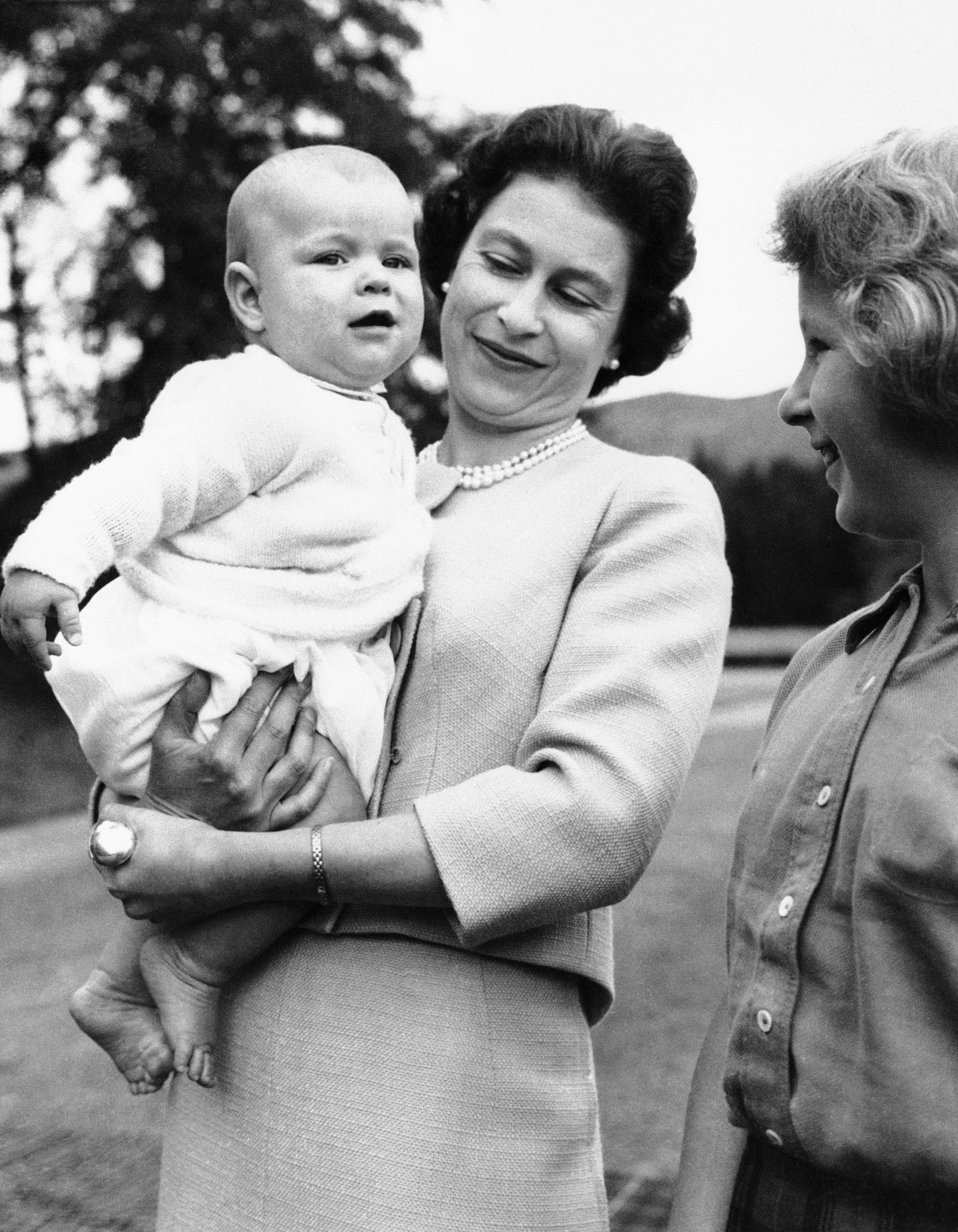 Elizabeth gave birth to her third and fourth children after becoming queen. Prince Andrew, pictured here with his mother and big sister, Anne, was born in 1960. Prince Edward was born in 1964. (AP Photo) 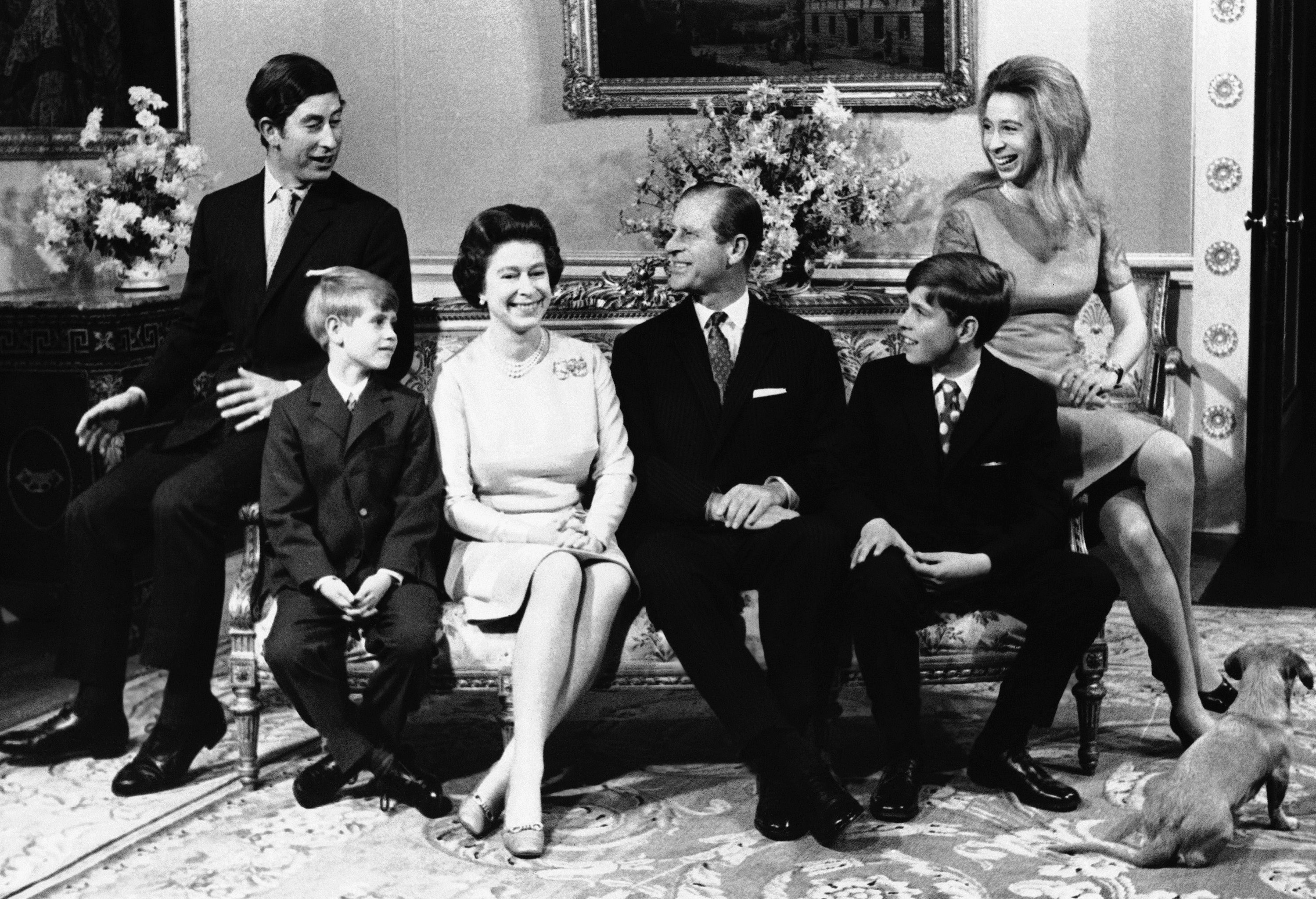 The entire family posed together for a photo at Buckingham Palace in London on Nov. 20, 1972, to mark Queen Elizabeth and Prince Philip’s silver anniversary. From left to right are: Prince Charles, Prince Edward, the queen, Prince Philip, Prince Andrew, and Princess Anne. (AP Photo, File) 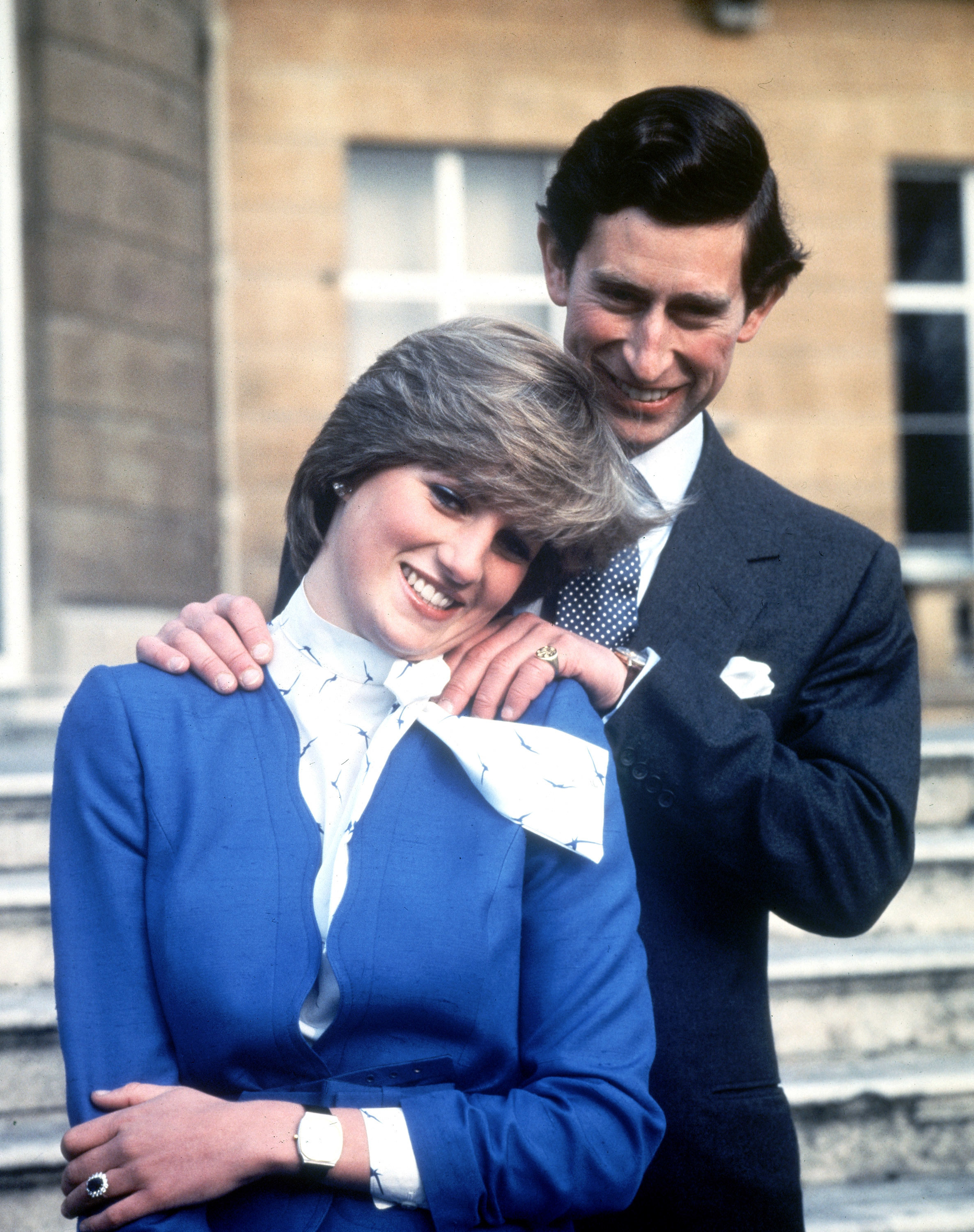 On Feb. 24, 1981, Prince Charles announced his engagement to Lady Diana Spencer. Their fairy-tale wedding, broadcast around the world, marked the height of royal fever. The couple endured intense media scrutiny, and it soon revealed cracks in their relationship. By 1986, Charles had reportedly resumed an affair with Camilla Parker Bowles, with whom he’d had a relationship before his marriage. Diana also had at least one affair, and the British media had a field day with the resulting family drama. The couple legally separated in 1992, a move with both personal and political consequences for the family. British Prime Minister John Major announced the news in Parliament. (AP Photo/Pool, File) 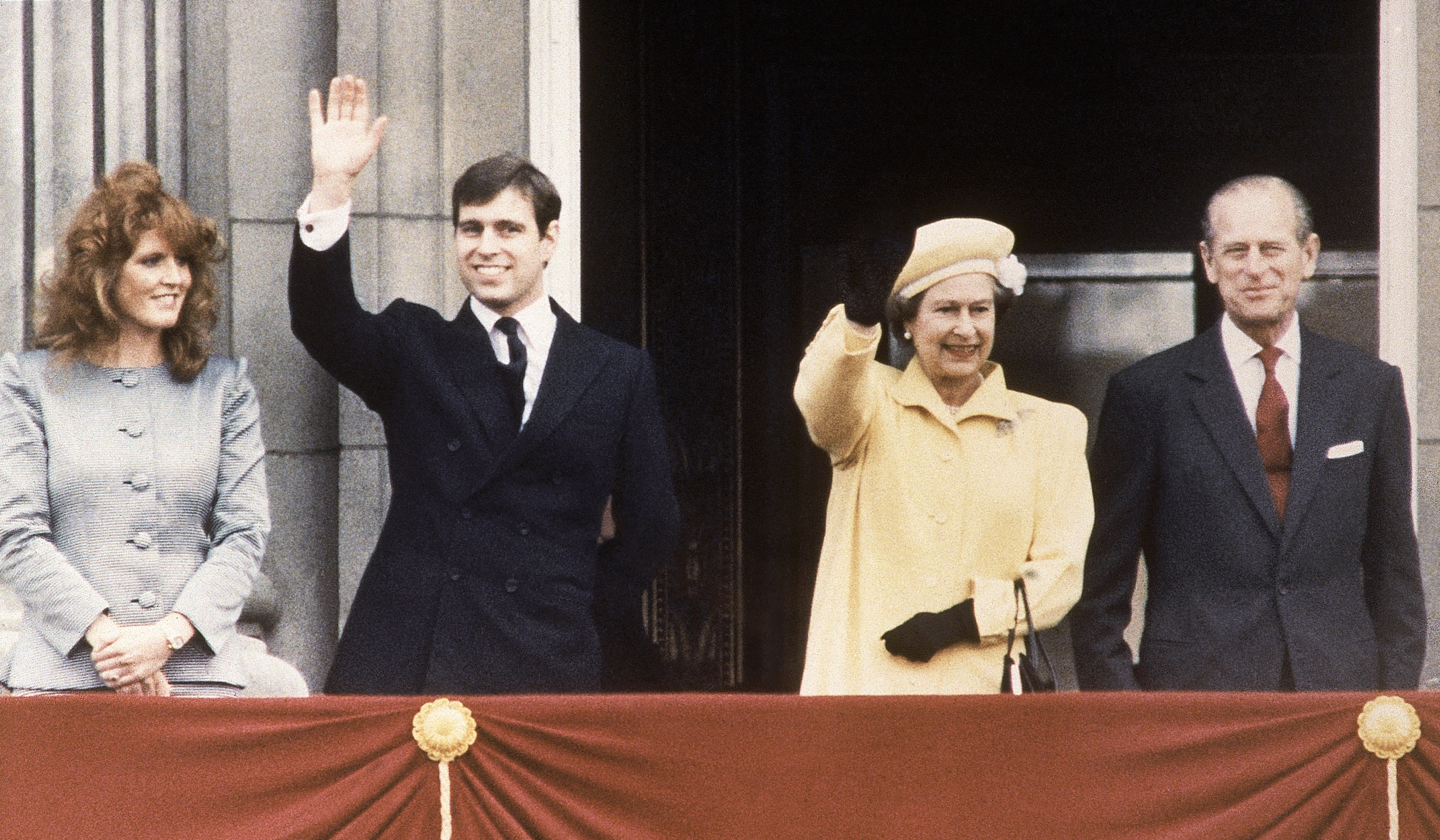 Queen Elizabeth celebrated her 60th birthday in 1986. She and Prince Philip are pictured here on the balcony of Buckingham Palace with Prince Andrew and his fiance, Sarah Ferguson. The younger couple married in another televised extravaganza on July 23, 1986. They separated in March 1992, kicking off a year the queen would later call her “annus horribilis,” chiefly due to her children’s marital troubles. In April, her daughter, Princess Anne, divorced her husband, Captain Mark Phillips. Prince Charles and Princess Diana separated in December. Queen Elizabeth alluded to the family’s trouble during a speech in November commemorating her Ruby Jubilee. Her youngest son, Prince Edward, is the only one not to go through a divorce. (AP Photo/Peter Kemp) 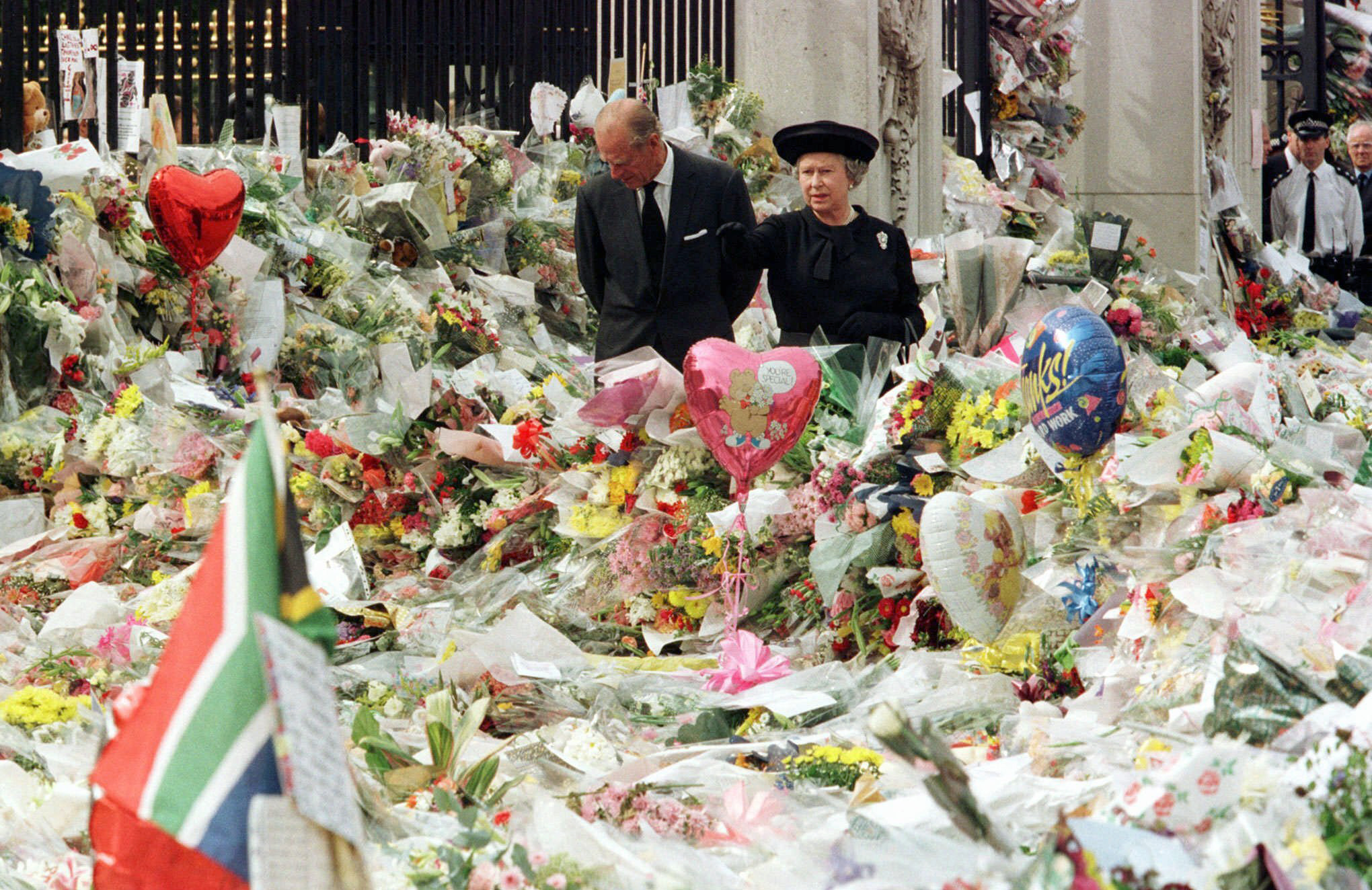 The low point in Queen Elizabeth’s reign came in 1997 amid an outpouring of grief for Princess Diana, who died in a car crash in Paris on Aug. 31. Even after her divorce from Charles, Diana remained universally popular, with the media dubbing her “the people’s princess.” Six days after the accident, Queen Elizabeth and Prince Philip walked outside Buckingham Palace to view the floral tributes left in Diana’s honor. The queen faced mounting criticism for showing a lack of emotion following Diana’s death, and on Sept. 5 she made a televised statement on behalf of the family, expressing her grief. (Pool Photo via AP, File) 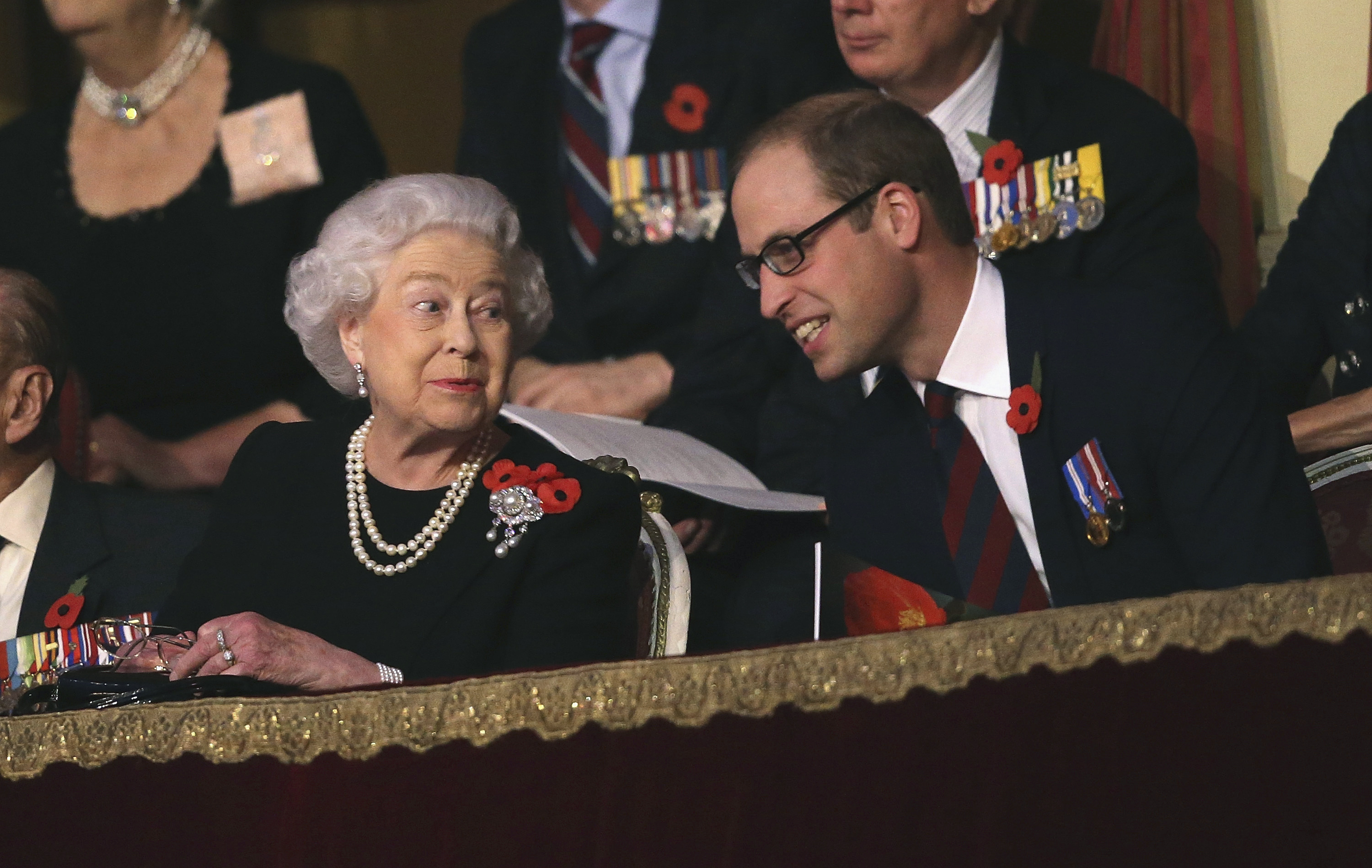 Despite the public criticism over her response to Princess Diana’s death, Queen Elizabeth maintained a close relationship with Diana’s oldest son, who’s now first in line to the throne. Prince William married Catherine Middleton in 2011, and their lives more closely mirror that of his grandparents than his parents’, in terms of public decorum. The couple have three children, George, Charlotte, and Louis. Interest in the young family and a renewed fondness for the queen helped fuel a resurgence of admiration for the royal family in recent years. (Chris Jackson/Pool Photo via AP, File) 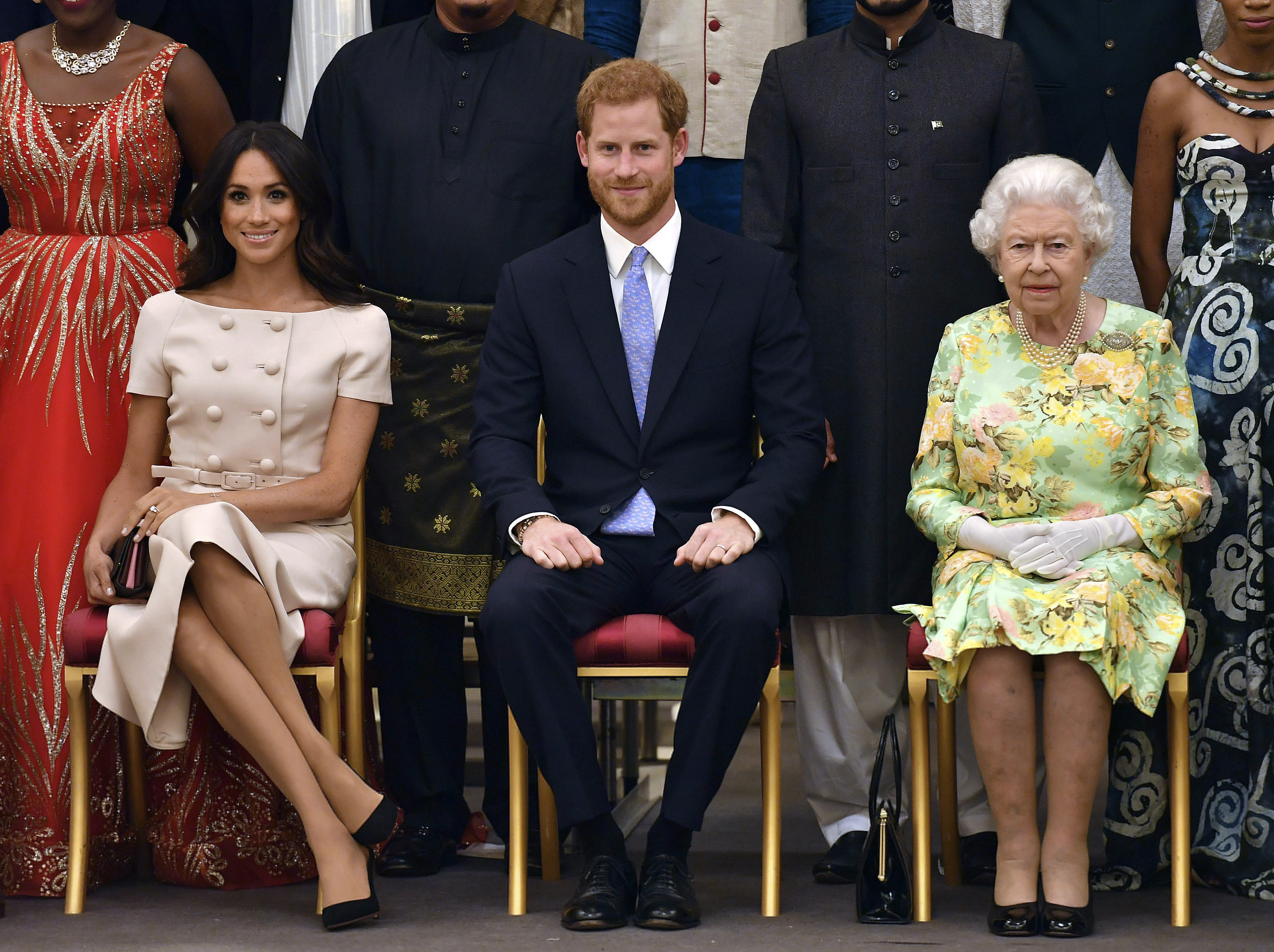 The final family scandal to plague Queen Elizabeth involved Prince William’s brother, Harry. In 2018, Harry married American actress Meghan Markle. They initially made their home in England and participated in royal events as representatives of the queen. In 2019, the couple had their first child. But less than a year later, they announced they would no longer be working members of the royal family and would give up their titles and patronages. The queen issued a rare formal statement about the family rift in January 2020. Harry and Megan claimed the royal establishment did not provide enough help combatting false media reports and hostile treatment by the tabloid press. They also alleged a subcurrent of racism toward Meghan, who is biracial. The couple moved to California but made their first return visit to England for the queen’s jubilee celebration earlier this year. (John Stillwell/Pool Photo via AP) 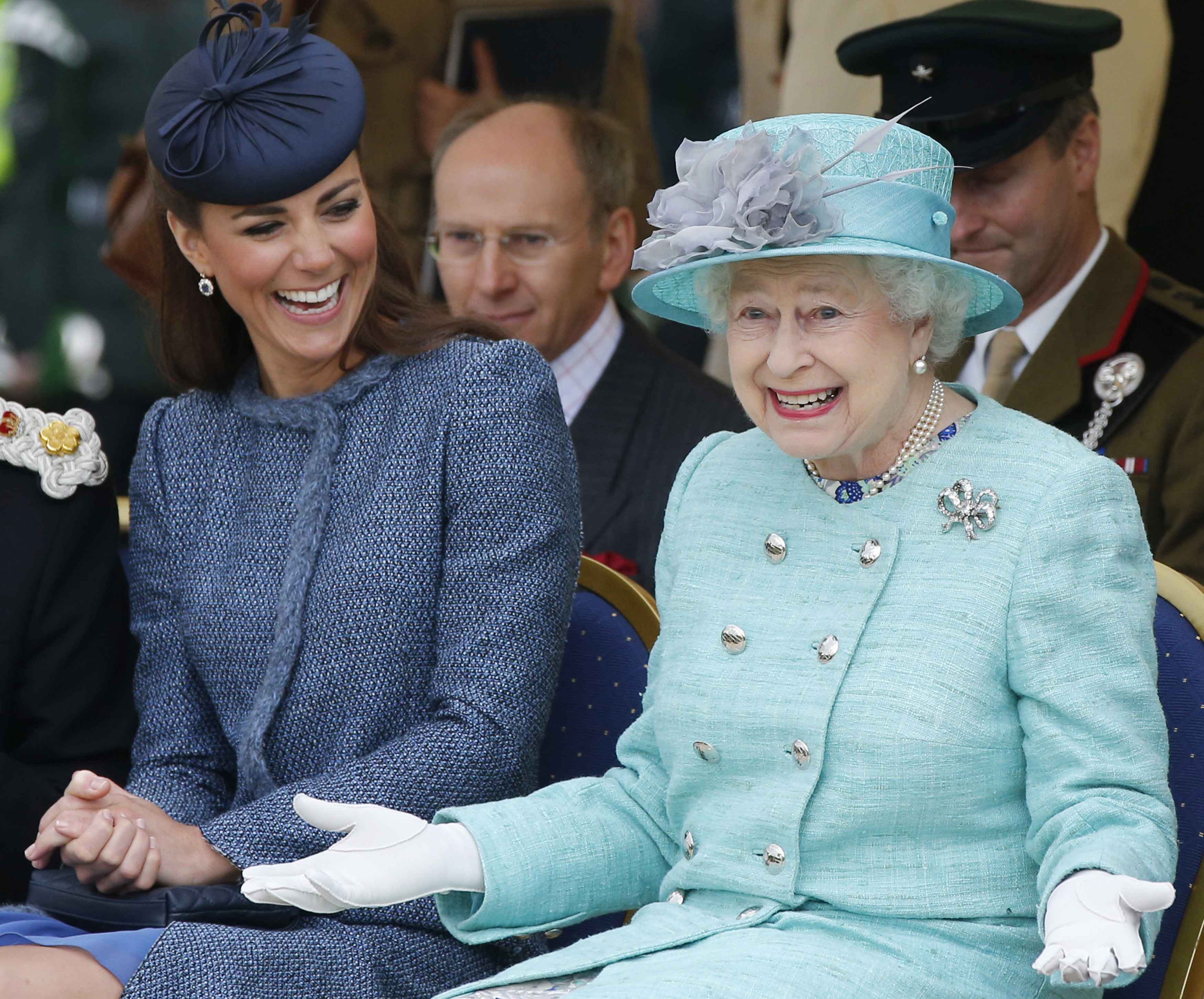 While attending a children’s sporting event in 2012, Queen Elizabeth laughs with the Kate Middleton. The queen, though advancing in years, continued to participate in public events. Only a few days before her death, she welcomed Britain’s newest prime minister, Liz Truss, into office. (AP Photo/Phil Noble, Pool) 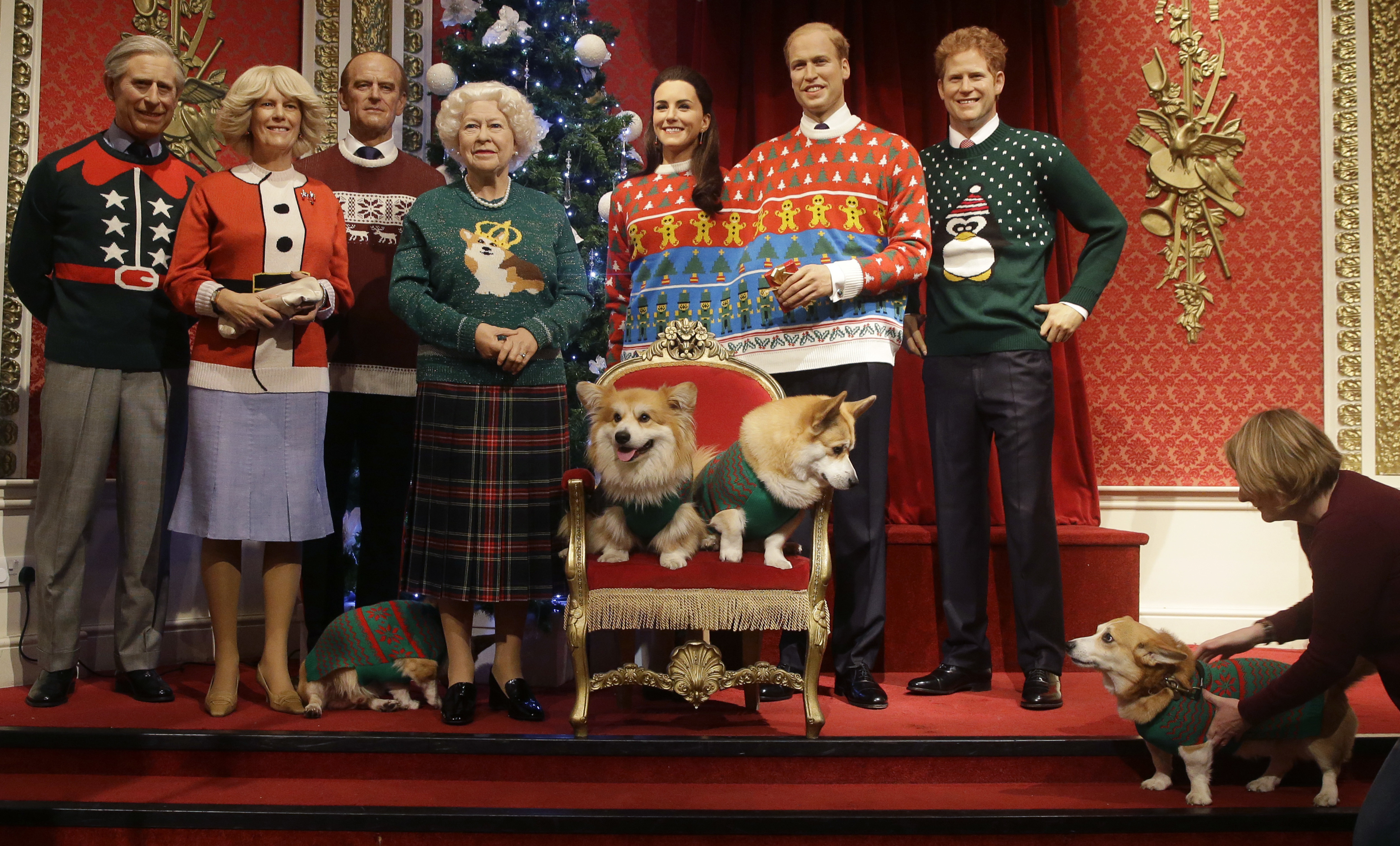 Queen Elizabeth personified the famous British “stiff upper lip.” But she also had a playful side that occasionally peeked through in events like this 2006 “ugly sweater” charity fundraiser for Madame Tussauds wax works in London. Even the corgis got a cameo. (AP Photo/Alastair Grant) 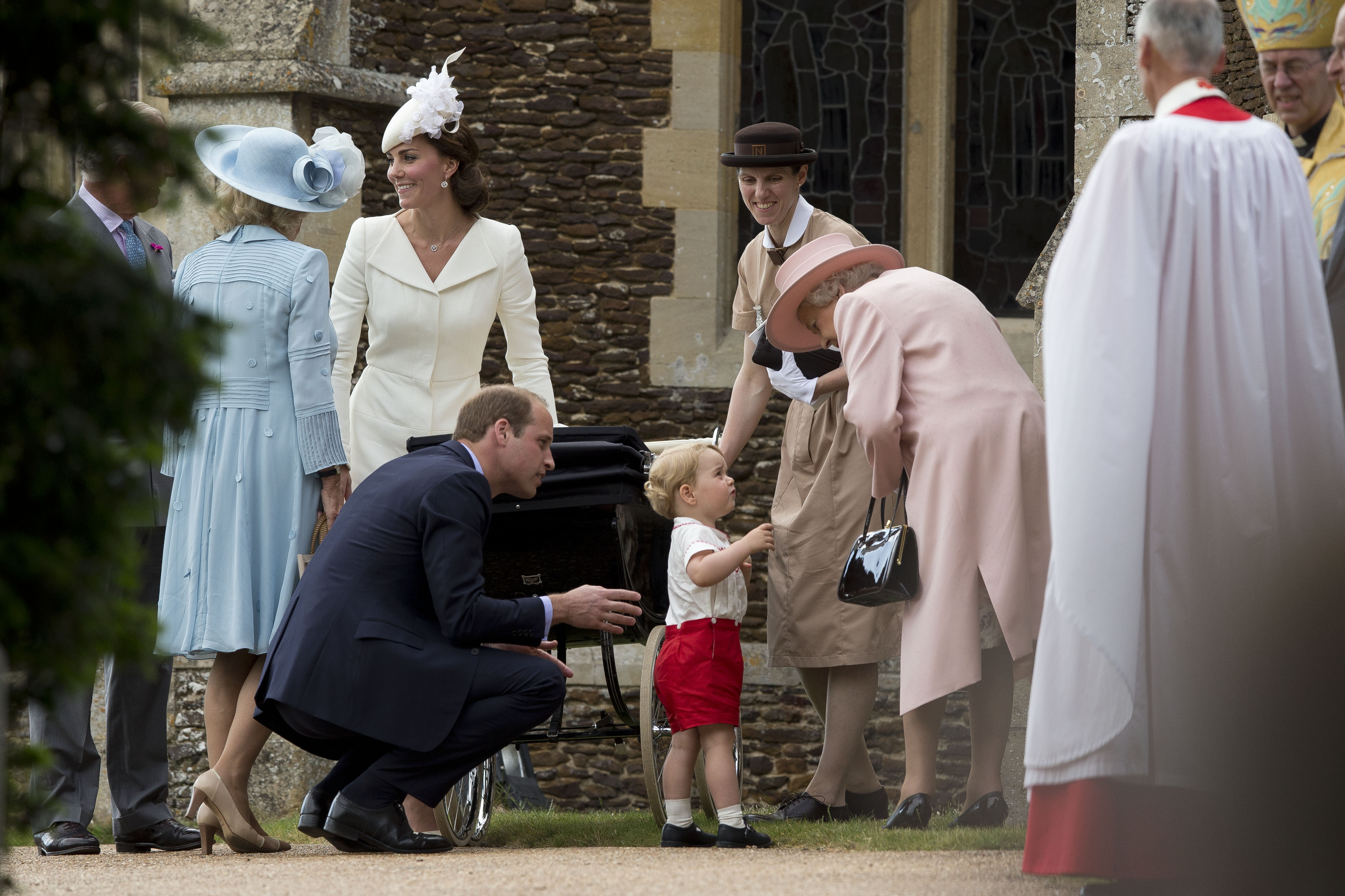 The Church of England continued to play an important role in family life throughout Elizabeth’s reign. In this photo, taken outside St. Mary Magdalene Church on July 15, 2015, the queen bends to talk to 1-year-old George after the christening service for his sister, Princess Charlotte. In later years, the queen spoke openly about her own faith. During her Christmas address to the nation in 2012, the year of her Diamond Jubilee, the queen encouraged her subjects to embrace the true meaning of the birth of Christ. After her death, Franklin Graham, son of evangelist Billy Graham, called her “a true friend of the Christian faith.” 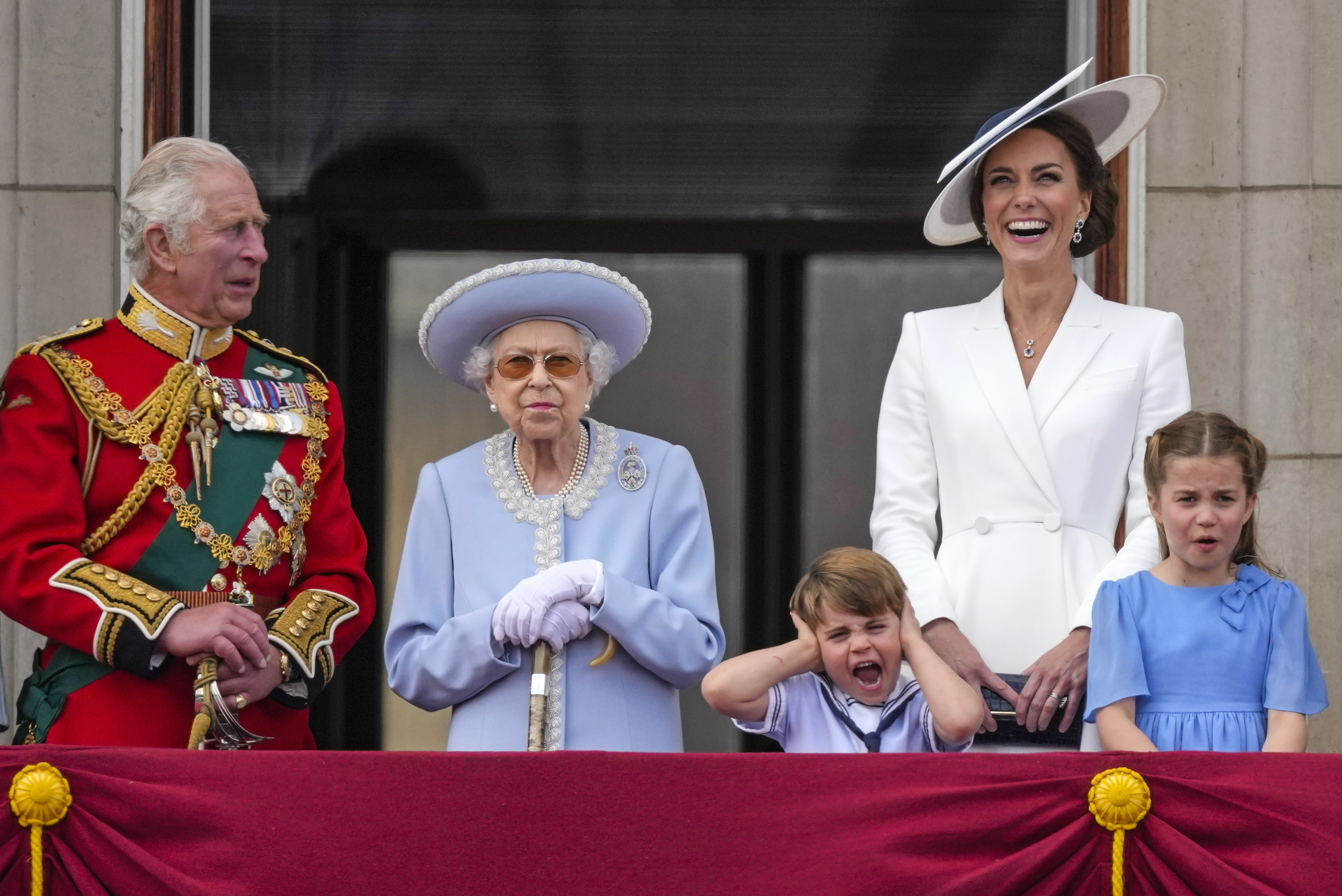 On June 2, 2022, the queen celebrated her platinum jubilee to commemorate 70 years on the throne. Events included a military parade, a pageant, and a pop music concert. The family watched a military flyover from the balcony of Buckingham Palace—a part of the celebration young Louis didn’t appreciate. Due to health concerns, the queen did not participate in much of the celebration. (Alastair Grant/Pool Photo via AP) 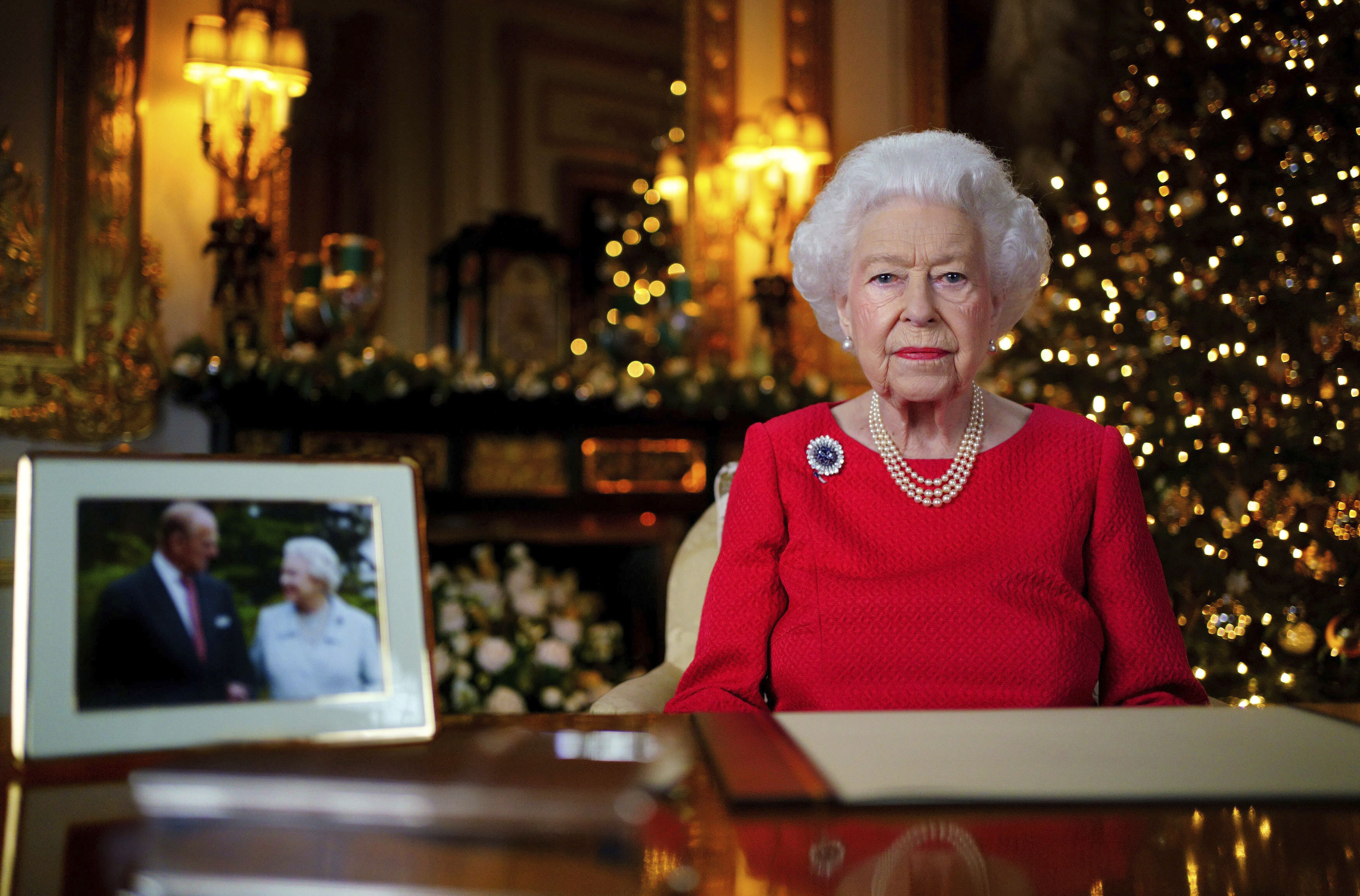 Nine months after her husband’s death in April 2021, Queen Elizabeth gave her traditional Christmas address to the nation. “Although it's a time of great happiness and good cheer for many, Christmas can be hard for those who have lost loved ones," she said. ”This year, especially, I understand why.“ A photo of the couple appears in the foreground of this official photo taken to commemorate the Christmas message. (Victoria Jones/Pool via AP) 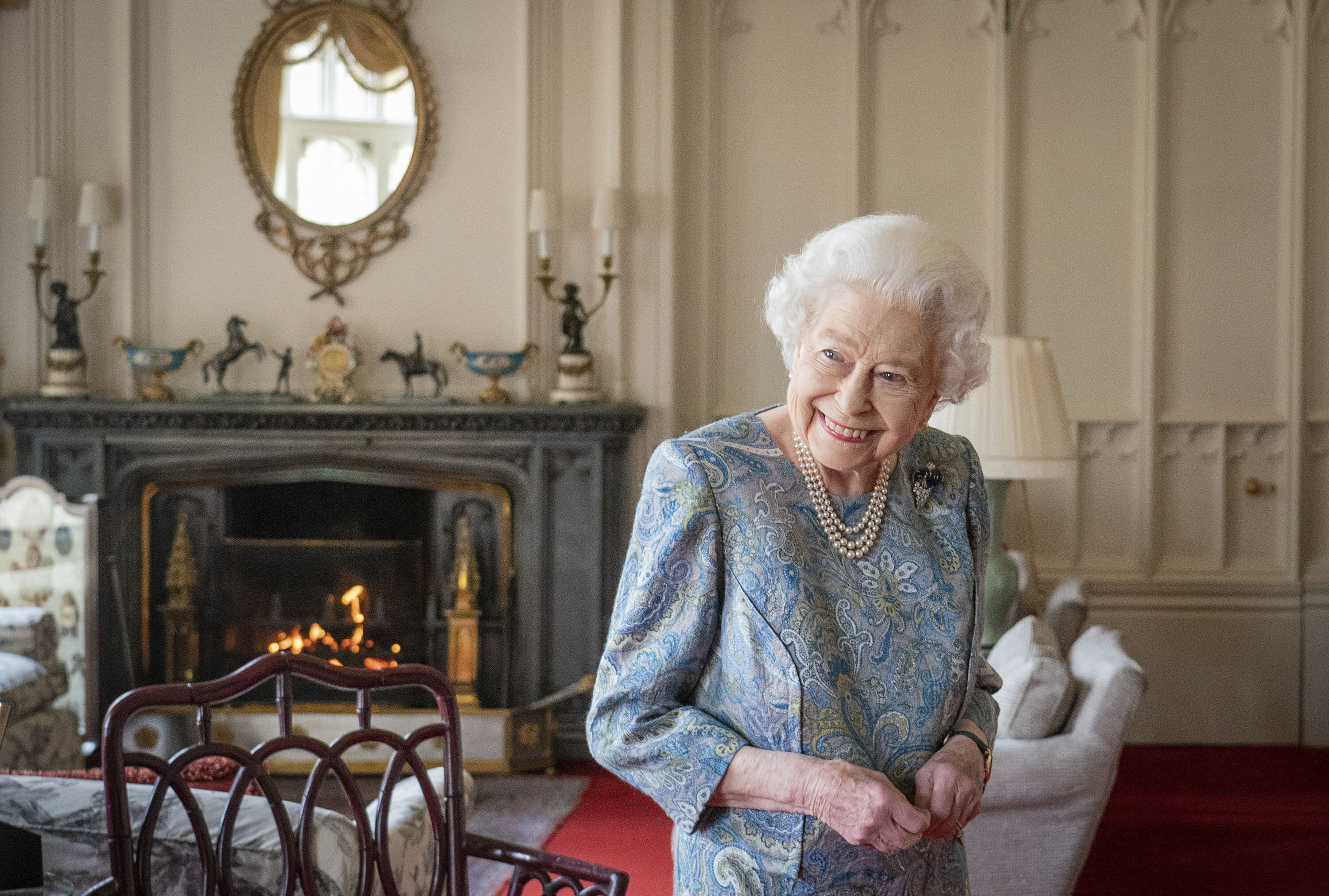 Queen Elizabeth died on Sept. 8, 2022. She was 96. During her lifetime, the queen met 13 U.S. Presidents, appointed 15 British prime ministers, and became Britain's longest reigning monarch. Reflecting on her legacy, Canadian Prime Minister Justin Trudeau remarked, "In a complicated world, her steady grace and resolve brought comfort to us all." (Dominic Lipinski/Pool Photo via AP)