Protesting for change, praying for peace

Christians in Belarus find themselves caught in a government crackdown

“Belarus has woken up,” said Bela-rusian opposition leader Sviatlana Tsikhanouskaya in an Aug. 25 address to members of the European Parliament. “We are not the opposition anymore. We are the majority now.”

But while she earlier had stressed that the “peaceful revolution” in Belarus was neither for nor against Russia or Europe, and called on other countries to respect the sovereignty and territorial integrity of Belarus, on Sept. 8 Tsikhanouskaya made a plea to the Parliamentary Assembly of the Council of Europe: “My country, my nation, my people now need help,” she said, and she called for international pressure on the regime. “I refuse, as millions of Belarusians do, to accept that this is the fate of my country, that the world will simply stand and watch these countless abuses of human rights, this blatant disregard of human dignity,” she said.

This came the same day that the Ministry of Defense of Belarus announced that military units from Russia and Serbia would arrive in the country for large-scale exercises on Sept. 10-15. Russian President Vladimir Putin previously said the Russian Federation had created a reserve of law enforcement officers for Belarus at the request of embattled Bela-rusian dictator Alexander Lukashenko.

One month after disputed presidential elections, hundreds of thousands across Belarus continue daily protests calling for Lukashenko’s resignation and waving red-and-white flags—a traditional Belarusian symbol of opposition. Lukashenko has been president of Belarus for the past 26 years. He claimed to have won 80 percent of the vote in the Aug. 8 elections, but nationwide grassroots support for Tsikhanouskaya suggests otherwise, and election observers say the vote was rigged.

In addition to calling for new elections, protesters are demanding that security forces who participated in violent crackdowns be held accountable. Lukashenko has justified the initial crackdowns by claiming that it was necessary in light of a potential NATO invasion. But NATO leaders denied his claims that the alliance was massing troops on Belarusian borders. 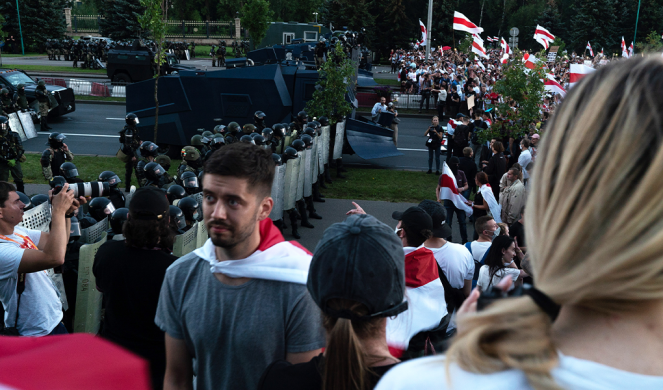 Hundreds of witnesses have told of the brutal tactics used by OMON—the government’s security force—to suppress protests in the days following the elections. Peaceful protesters and passersby were seized, severely beaten with batons, tortured, and held in inhumane conditions.

Belarusian pastors reported that dozens of church members suffered in the violence, and evangelical leaders across denominations united to issue a statement condemning the violence and calling for prayer. Pastor Leonid Mi-kho-vich of the Baptist Union of Belarus said that while church leaders avoid direct involvement in politics, they are in contact with their members encouraging them to pray for a peaceful resolution to the nation’s conflict. There are approximately 70,000 evangelical Christians in the nation of 9.5 million.

Sergey is a 32-year-old composer and musician who leads worship at the New Generation Church in Minsk. (WORLD is withholding his last name over concerns about government reprisals.) He posted a YouTube video telling of his experience. On Aug. 11, he did not attend the rally, but while walking home with a friend he came upon a group of men dressed in black military gear. After initial cordial exchanges, the armed men suddenly grabbed them and threw them into a nearby bus. Sergey and his friend were beaten, tortured, and imprisoned for two days without hearing the charges against them.

His pregnant wife and 1-year-old daughter visited the prison, but guards told them no one with his name was there. Under torture, prisoners were forced to sign a document without being able to read it. Sergey was released after two days with comparatively “minor” injuries: massive bruising on his legs and back. A fellow detainee had both legs broken as a result of the beatings. Sergey says authorities informed him his trial will be held in September and that he’ll either have to pay a fine or serve more time in prison.

Sergey’s story is far from isolated. Military forces detained 7,000 civilians in the days just after the elections, and many have similar stories. The prisons released those with the worst injuries to local hospitals, where healthcare workers have been speaking up about the violence-inflicted injuries they saw. 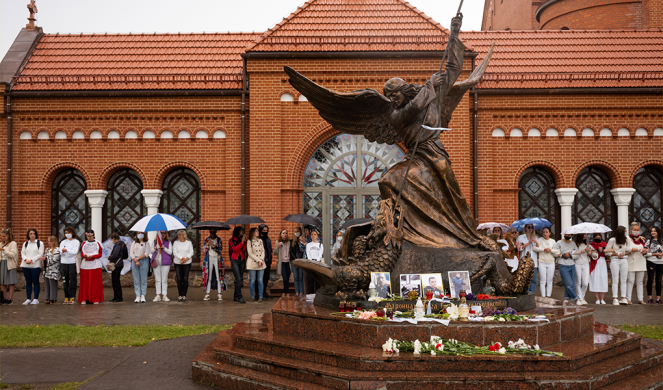 A group of women link together to protest against police brutality and the apprehending of protesters inside a church in Minsk. Misha Friedman/Getty Images

On Sept. 7, members of the opposition Coordination Council were kidnapped in Minsk and taken to the border with Ukraine to be forcibly expelled. Maria Kolesnikova, who has been instrumental in mobilizing protesters and striking factory workers, tore up her own passport to avoid deportation and stay in the country.

Lukashenko is trying to reassert his authority, and his forces are again arresting large numbers of protesting civilians. Meanwhile strikes are ongoing at the nation’s largest factories, despite intimidation and arrests of strike leaders. The strikes have slowed the economy and caused devaluation of the Belarusian ruble. Grassroots efforts to support striking workers and those injured in the protests have quickly raised hundreds of thousands of dollars.

Pastor Mikhovich said his church will also continue its mercy ministries toward those affected: “We trust in our Lord, and we try to help people in many ways.” He said that although he was also recently contacted by a government official, “We must condemn violence and cruel behavior. We cannot keep silent.”

Editor’s Note: WORLD has updated this story since its original posting.