Kamala Harris has a complicated record, but her zeal to support abortion and attack its opponents has been consistent

Political consultant Ace Smith kept an amusing souvenir from his time working on Kamala Harris’ campaign for attorney general of California. A framed copy of a San Francisco Chronicle headline hung in his office: “Cooley beats Harris to win attorney general race.” The website clipping was amusing because it proved untrue.

Though Los Angeles District Attorney Steve Cooley declared victory in a close contest on election night in 2010—and the Chronicle initially ran with the news—a full count of the votes rendered a different verdict three weeks later: Harris prevailed over Cooley by less than 1 percent.

The episode echoed the famous 1948 headline in the Chicago Daily Tribune: “DEWEY DEFEATS TRUMAN.” An exuberant Harry Truman hoisted a newspaper with the errant headline after it became clear he had defeated Thomas Dewey in a close presidential contest.

In the decade since Sen. Kamala Harris, D-Calif., clinched the attorney general’s job in her home state of California, she’s run a successful Senate race, and now she’s running in what could be a close contest for the White House as the Democratic vice presidential nominee.

Cooley—still a California attorney—has spent the last four years detailing what he calls Harris’ mishandling of one of the most dramatic pro-life cases of the last decade: David Daleiden’s undercover videos showing Planned Parenthood’s practice of charging fees for providing aborted baby parts to research companies.

Cooley is one of the lawyers defending Daleiden against 15 felony counts related to his undercover journalism for the Center for Medical Progress. One of the group’s earliest videos showed a Planned Parenthood official in California describing how an abortionist strategically crushes an unborn baby to preserve his or her organs intact.

Prosecutors allege Daleiden recorded the videos illegally. Current California Attorney General Xavier Becerra announced the criminal charges in 2017, but the investigation began in 2015 while Harris led the state’s Department of Justice—and it included a raid on Daleiden’s home.

It’s a lesser-examined but revealing chapter in Harris’ criminal justice record. That record includes efforts that some progressive activists have criticized and that some conservatives have applauded. But it also reveals a focused determination on certain issues, including defending abortion and undermining religious liberty. Given Democratic presidential nominee Joe Biden’s advanced age and concerns about his health, the record of Harris, his running mate, rises in importance. 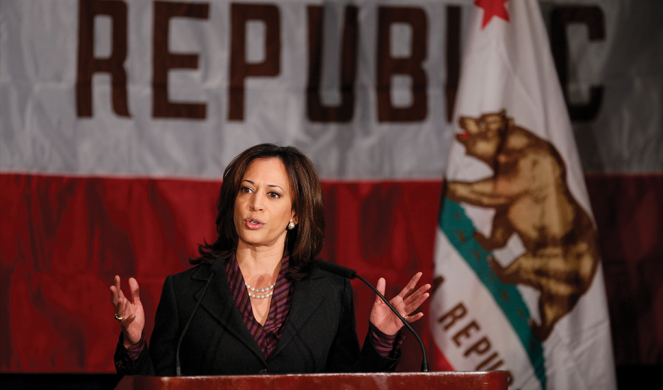 BY THE TIME HARRIS, now 55, took over as California’s attorney general in 2011, she was already well known in San Francisco: Harris had served as the city’s district attorney since 2004.

Harris focused on winning cases, and when she ran for reelection as district attorney in 2007, she touted raising the city’s felony conviction rate from 52 percent to 68 percent in three years.

She also considered how to prevent more crimes: Harris established a Back on Track program that offered pretrial diversion for certain offenders ages 18 to 30. (The program required community service, weekly meetings with case managers, and signing up for job training.)

Some critics thought Harris was too tough an attorney general: During her inaugural address, Harris told parents of public school students the city would penalize them if their children were chronically absent. Critics noted the policy could disproportionately affect low-income and minority parents, but Harris said stemming absenteeism was an important way to keep kids on track in school and out of the criminal justice system themselves.

In other cases, critics said Harris wasn’t tough enough: During her tenure as district attorney, she refused to pursue the death penalty for an assailant who killed a police officer. Sen. Dianne Feinstein, D-Calif., received a standing ovation at the officer’s funeral after giving a speech that included criticism of Harris’ decision.

But in another case, Harris chose not to defend a new law: She refused to defend Proposition 8, the successful California voter referendum that defined marriage as an institution between a man and a woman. Harris said the referendum violated the Constitution.

In 2016, Harris won a U.S. Senate seat and continued with efforts on criminal justice reform: She sponsored legislation with Sen. Rand Paul, R-Ky., to reform the cash bail system for criminal defendants, and she worked with Sen. Tim Scott, R-S.C., on anti-lynching legislation. In 2018, she voted for a bipartisan criminal justice bill called the First Step Act. Republican attorney Holly Harris of the Justice Action Network called Harris “one of our most zealous advocates on the Hill.”

But bipartisanship hit its limits earlier this year, when Harris strongly opposed a police reform package introduced by Scott. The South Carolina senator expressed disappointment in Democrats’ refusal to debate the bill after the death of George Floyd during a police encounter in Minneapolis.

Harris denied accusations that her vice presidential aspirations had gotten in the way of working with Republicans. But her devotion to a range of Democratic policies was already well established, along with her longtime advocacy for positions once considered extreme by her own party. 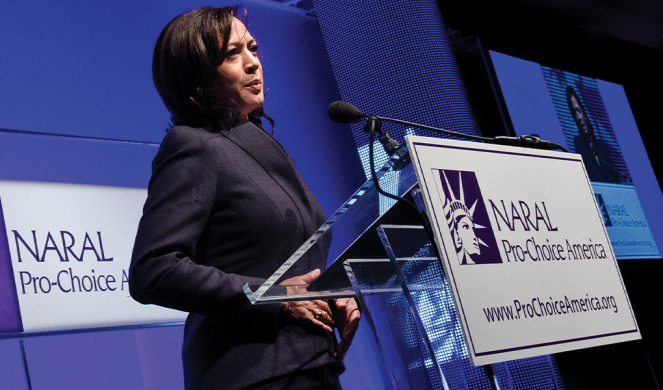 WHEN HARRIS ASSUMED HER ROLE as attorney general of California, abortion-related issues weren’t foreign to the office, but they took center stage after Daleiden began releasing his undercover videos regarding research companies paying fees to Planned Parenthood for aborted baby parts.

In July 2015, the Center for Medical Progress released its first undercover videos, showing California Planned Parenthood officials discussing how to obtain the optimal specimens from abortions.

One official mentioned being willing to ask an abortionist to use a “less crunchy” method to preserve an aborted baby’s body parts for later use by medical researchers. The official said she wasn’t in it for the money, but she did negotiate potential fees for specimens. She joked: “I want a Lamborghini.”

Federal law prohibits the sale-for-profit of fetal tissue. It also prohibits abortionists from altering an abortion method in order to obtain human tissue for the purpose of medical research. Planned Parenthood denies both charges, but the videos raised searing questions about the abortion provider’s practices.

Cooley and Daleiden’s other attorneys contend Harris likely greenlighted the investigation at least in part because of her political connections to Planned Parenthood.

The group’s PAC had donated to her Senate campaign, and during the same week that agents raided Daleiden’s home, a page on Harris’ Senate campaign website urged supporters to sign a petition to “Defend Planned Parenthood” against a loss of federal funds.

Daleiden’s attorneys say Harris and other political appointees in her office should have recused themselves from the deliberations over an investigation related to Planned Parenthood.

The attorneys also note the argument that Daleiden violated state law by recording conversations without the knowledge of Planned Parenthood didn’t seem to apply when other activists and journalists conducted undercover investigations that included video recordings.

In 2013, the group Mercy for Animals published videos of an undercover investigation into animal cruelty at a California farm. In 2015, Harris’ office appealed a California judge’s decision to allow farmers to continue the practice of force-feeding ducks to produce foie gras. The animal rights group heralded Harris’ move.

A few months later, Daleiden released his first videos showing Planned Parenthood officials discussing how abortionists determine where to crush an unborn baby in order to kill the child but preserve his or her organs. Daleiden still faces 15 felony charges brought by Harris’ successor.

As Daleiden’s criminal case winds its way through the courts, he’s filed a civil lawsuit naming Harris and other California officials he says violated his civil rights by conducting “a brazen, unprecedented, and ongoing conspiracy to selectively use California’s video recording laws as a political weapon to silence disfavored speech.”

HARRIS’ DISFAVOR FOR PRO-LIFE VIEWS isn’t a secret in Washington. In the Senate, she co-sponsored the Women’s Health Protection Act—legislation designed “to protect a woman’s ability to determine whether or when to bear a child or end a pregnancy.”

Among other provisions, the bill would invalidate any law prohibiting an abortion “after fetal viability when, in the good-faith medical judgment of the treating physician, continuation of the pregnancy would pose a risk to the pregnant woman’s health or life.” The provision doesn’t specify whether mental health could be a reason to allow a late-term abortion.

“We cannot tolerate a perspective that is about going backward. … On this issue, I’m kind of done.”

During her bid for the Democratic nomination, Harris unveiled a plan to require some states to obtain preclearance from the federal government before enacting new abortion laws.

“We cannot tolerate a perspective that is about going backward and not understanding that women have agency, women have value, women have the authority to make decisions about their own lives and their own bodies,” Harris said at an MSNBC town hall.

The issue spilled over into the acrimonious confirmation hearings for Supreme Court Justice Brett Kavanaugh in 2018. Harris, who sits on the Senate Judiciary Committee, asked Kavanaugh, “Can you think of any laws that give the government power to make decisions about the male body?” (Kavanaugh said no.)

Harris’ work on the same committee brought up questions about her views on religious liberty later the same year.

During hearings on the nomination of Brian Buescher as a district judge in Nebraska, Harris questioned the nominee about his participation in the Knights of Columbus, a charitable Catholic organization. Harris specifically asked whether Buescher knew about the group’s opposition to gay marriage when he joined, and she inquired about whether he had ever opposed abortion.

Early last year, Harris reintroduced the Do No Harm Act—legislation that would strip religious liberty protections in the Religious Freedom Restoration Act (RFRA). Harris said “the freedom to worship” is a fundamental right, but that the First Amendment shouldn’t be used to “undermine other Americans’ civil rights or subject them to discrimination on the basis of race, gender, sexual orientation, or gender identity.”

Thomas Jipping of the Heritage Foundation noted that the Constitution protects the “free exercise” of religion, and the Do No Harm bill “seeks to dilute the substance of religious freedom to nothing more than speech or private worship and to reduce its significance to nothing more, and often less, than other political priorities.”

Jipping noted that RFRA doesn’t settle conflicts between the government and how people exercise religion in their daily lives, but the law dictates that courts must sort out such disputes. He said the Do No Harm bill would “deny anyone the chance to argue that the government ever goes too far. The government would always win.”

Heading into the final stretch of the election season, Harris will try to introduce herself to more voters who are starting to pay closer attention to the contests. She may also lean into her past record and into the L.L. Cool J song her campaign played when she walked into earlier campaign events: “Don’t call it a comeback / I’ve been here for years.”

—Read part 2 of this issue’s cover story package: “Following the chain of command”