On Sunday morning before church, Pastor Youngman Chan arrived at his local polling station—a Catholic elementary school in Kowloon—surprised to find a long line snaking down the block. Last year, he was able to walk right into the building, but now he had to wait 45 minutes in order to cast his vote for the local district council elections. 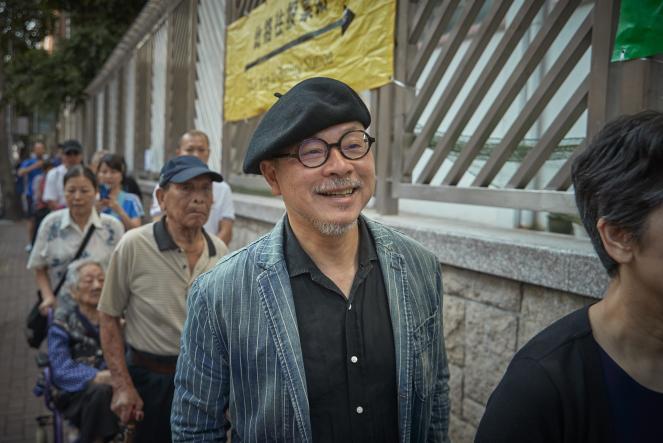 Although the district councils are focused on very localized issues—traffic, neighborhood beautification, recreational facilities—they are the only government bodies fully chosen by direct elections. Only half of the members of Hong Kong’s legislature are elected by the public, while the city’s chief executive is elected by a special committee of 1,200 people. By gaining control of the district councils, the pro-democracy bloc will control 117 votes in the election committee, and district council members can be elected to six seats in the legislature.

Despite a district councilor’s mundane tasks, many candidates politicized their campaigns, using protest slogans such as “Five demands, not one less,” or “Liberate Hong Kong, revolution of our times.” On Sunday, down the road from Pastor Chan’s polling station, a group of young people dressed in black clothing and yellow hard hats campaigned for pro-democracy candidate Vincent Lam. Login Wong, 26, held up a banner similar to the ones riot police raise to warn passersby of tear gas, except Wong’s banner said, “Warning: Vote today!” 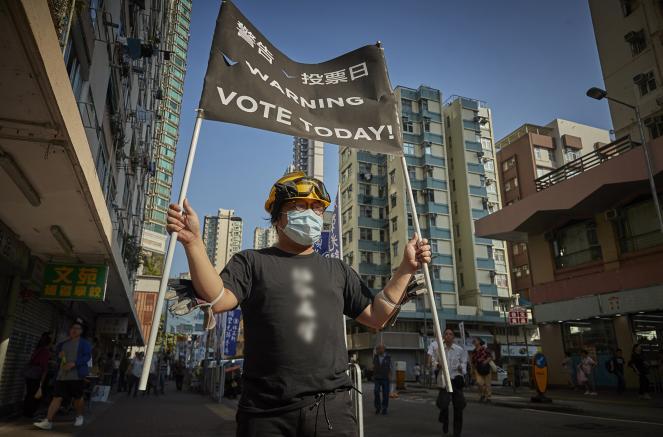 “While district councilors can’t create laws or major changes, they can take on smaller actions such as visiting protesters in prison and providing resources to help them,” Wong said. “The results of the election will be like the compass of the public opinion—how they look to the protest, the police, and the government.”

Wong said he believed a pro-democracy landslide would be like a “slap in the face” to the Hong Kong government, which has said that the protesters have lost the support of the Hong Kong people as violence escalates. The past two weeks saw dramatic clashes first at Chinese University of Hong Kong and more recently at Hong Kong Polytechnic University (see below).

At the Kowloon polling station, a couple waited in line with their 9-month-old daughter. Edward Chan, 32, believed it was important for Hong Kongers to vote for more pro-democratic district councilors in order to send a message to the government that “we want something they aren’t doing right now.”

His wife, Jolly Lau, said it was her first time voting. In the past, she didn’t think politics impacted her life. But after the Umbrella Movement and the anti-extradition bill protests, she decided it was her duty to vote and safeguard Hong Kong’s freedom. Lau said her political awakening has put her at odds with her father, whom she described as a staunch believer in pro-establishment media. The two no longer discuss politics.

“It makes me sad because we must be a model for our children,” Lau said. “When my daughter grows up, I want her to see things for herself and analyze things, not just letting others tell her what is right.” 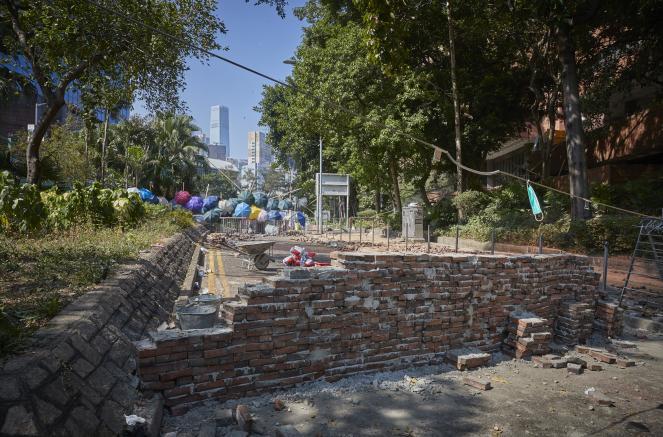 A visit to PolyU

The campus of Hong Kong Polytechnic University was eerily silent on Saturday, nearly a week after violent clashes there between police and protesters. The skeletal burnt remains of barricades blocked the university’s main entrance, with glass, broken umbrellas, and trash littering the ground. Another street entrance was blocked with piles of chairs, tables tied together with plastic zip ties, and a wall constructed of bricks taken from the sidewalk. 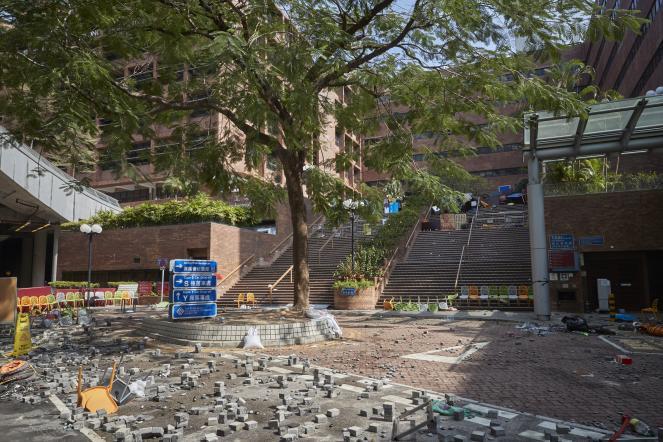 Debris around the university Kiran Ridley

Police had surrounded the university, also known as PolyU, on Nov. 17 in response to pro-democracy protesters who had blocked the entrance of the Cross Harbor Tunnel, one of the main transportation links connecting Hong Kong Island to Kowloon. Police fired tear gas canisters and rubber bullets as protesters fought back with Molotov cocktails, crude catapults, and even bows and arrows. In a dramatic scene that night, protesters set the exterior of an armored police truck on fire with Molotov cocktails.

Hundreds of protesters barricaded themselves inside the campus as police blocked their exit. Some escaped by rappelling down ropes from a bridge to motorists waiting on the freeway underneath. Some climbed into the sewage system, where they waded through chest-deep water. Others turned themselves in. During the assault, riot police fired rubber bullets and more than 1,000 rounds of tear gas, along with hundreds of bean bag rounds and sponge grenades. Arrested protesters could face up to 10 years in prison on charges of participating in a riot.

On Saturday, only around 30 people were left on the PolyU campus, most of them reclusive and hiding in the 23-acre property. Police continued to guard the university, allowing only a limited number of reporters, lawyers, social workers, and clergy members onto the grounds. 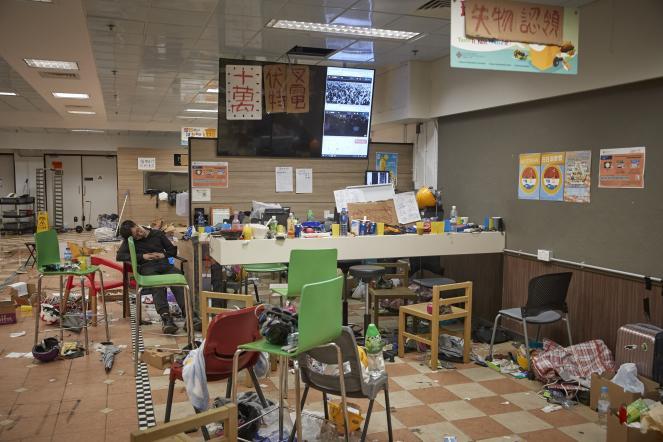 Some PolyU buildings appear destroyed—windows shattered, locks broken, walls marked by graffiti—while others with hand-written “Keep Clean” signs were left untouched. The canteen smelled of rotting food, and many of the rooms used during the siege were littered with trash, clothes, and backpacks. Empty glass bottles, diesel fuel, and other equipment for making Molotov cocktails were left strewn around the campus courtyard. 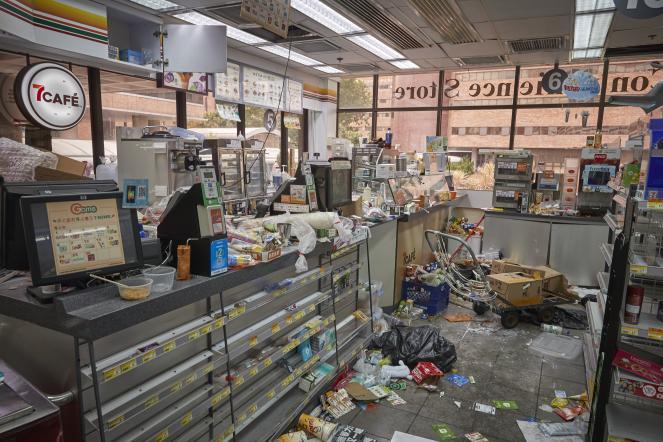 All afternoon, I saw only one protester on campus in addition to a man known as “Chef,” who cooked for protesters, and Ken Woo, president of the student union, who stayed to care for the holdouts. No one knew exactly how many protesters were left on campus, but Woo worried for their mental state as conditions on campus deteriorated.

By evening, both the cook and Woo had voluntarily left the campus.