Protesters remained outside the Midland, Texas, home of Bob Fu 10 days after law enforcement placed Fu and his family in protective custody due to threats. The protesters carry signs claiming the founder of ChinaAid and pastor who once was forced out of China by its Chinese Communist Party (CCP) government is “a CCP spy.” They have refused to tell local media where they are from or whether they are being paid.

The Manhattan residence of Guo Wengui, the Chinese billionaire whose online posts have targeted Fu and others, went under bankruptcy protection this week. In Washington, D.C., Rep. Chris Smith, R-N.J., issued a statement saying “more needs to be done” to protect Fu and his family. Smith highlighted Fu’s 13 appearances before congressional committees testifying to human rights violations in China.

In Midland, the National League of Pastors announced a rally set for noon on Thursday in support of Fu, his family, and ChinaAid. Fu, reached by phone Wednesday, said police have told him “it’s not safe” to attend the rally but he may speak to participants by video link. The pastor, his wife, and two children remain in protective custody at an undisclosed location. “We are holding together,” he said. “The children are realizing there is a price to pay for religious advocacy, even on U.S. soil.”

A Chinese billionaire under U.S. investigation has launched a campaign aimed at discrediting exiled Chinese dissidents living in the United States, including pastor and activist Bob Fu.

Guo Wengui, who has lived in the United States since 2015, in recent weeks has deployed his personal fortune and online platform to incite protests and violence against Christian human rights activist Fu, along with other Chinese dissidents who survived the 1989 massacre at Beijing’s Tiananmen Square.

Protesters began showing up in late September at Fu’s home in Midland, Texas, holding signs with Fu’s photo, chanting, and shouting threats. On Sunday, at least four busloads and cars with out-of-state license plates descended on the home, surrounding it and forcing police to form a cordon between the sidewalk and Fu’s front door. The protesters distributed flyers throughout the neighborhood and to nearby churches, and called Fu a “fake pastor” who tops a list of “evil cheaters.” In video online, Guo says, “We will never retreat. We will not start another campaign until we are done with you.”

As Guo continued to threaten Fu in October, law enforcement agents—including the FBI, state officers, and local police—intervened to remove Fu and his family to a safe house. Reached by phone at the undisclosed location, Fu told me: “The threat is very real.”

Fu, 52, joined as a student the legendary Tiananmen Square protests, but left three days before the violent crackdown by China’s Communist Party government (CCP). He became a Christian and started an underground church, and in 1996 authorities jailed Fu and his wife for their activities. Released after two months, they escaped to Hong Kong, then to the United States, where he attended Westminster Seminary and in 2002 founded ChinaAid. The association supports churches and pastors in China, while also documenting and publicizing the CCP’s crackdown on religious belief.

A Wednesday statement by ChinaAid denounced the accusations and threats, which forced the organization to close its offices this week.

Fu also serves on the pastoral staff of Mid-Cities Community Church in Midland. Lead pastor Daniel Stephens issued a statement on Sept. 28 calling the accusations against Fu “unfounded,” and saying Fu “has been an integral and vibrant part of our community for almost two decades.”

Fu told me he’s never met or dealt with Guo, who also goes by the English name Miles Kwok. “Until now he’s never given us negative treatment,” he said. 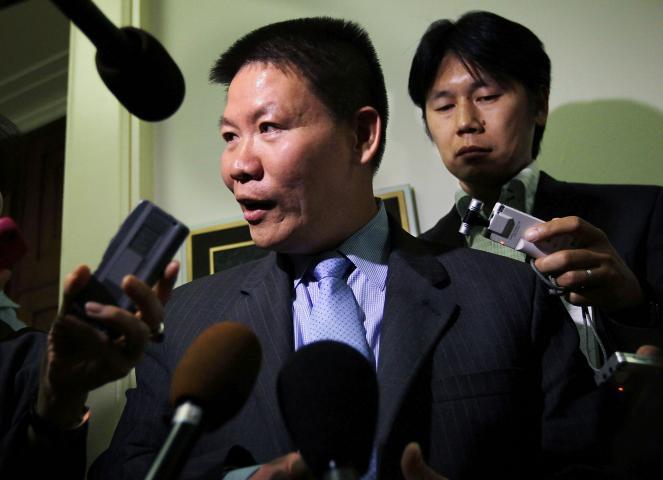 The fugitive tycoon has a checkered history of high-level connections in Beijing and Washington, including a media corporation started with former Trump White House adviser Steve Bannon. When federal agents arrested Bannon in August, he was aboard a yacht owned by Guo.

A grand jury indicted Bannon on federal charges of wire fraud conspiracy and money laundering in a fundraising effort to raise support for building a border wall. But the FBI and other authorities also are investigating Guo over alleged financial fraud connected to his GTV Media company, where Bannon is on the board.

The scrutiny hasn’t slowed Guo’s media output. In one video, Guo, dressed in a black shirt and gray suit coat, smokes a cigar while leveling charges against Fu, Chinese dissident pastor Baosheng Guo (who has worked with ChinaAid), and others.

In another, Guo stands in a ballcap and T-shirt in a spacious, gilt-framed room, speaking to the camera in Mandarin Chinese: “We will send at least 100 to 200 comrades to your house tomorrow,” he says, addressing Fu.

These and other video messages also target Tiananmen student leader Wu Jianmin, who was imprisoned in China and later fled to the United States. Guo’s followers surrounded Wu’s Los Angeles home for five days, with his wife and two children trapped inside. Guo has also named Zhang Boli, another Tiananmen leader and now a prominent Chinese American pastor.

Guo has a history of launching intimidation campaigns, some aimed at CCP officials, but Fu and others suspect he may be working as an agent of the Beijing government, or of certain factions within it.

Guo had a notorious falling out with Washington-based Strategic Vision that ended in litigation after he hired the research firm to investigate Chinese nationals he claimed were CCP members. But in court filings, Strategic Vision alleged the Guo research was aimed at uncovering Chinese nationals helping the U.S. government. The firm concluded Guo “was not the dissident he claimed to be. Instead, Guo Wengui was, and is, a dissident-hunter, propagandist, and agent in the service of the People’s Republic of China and the Chinese Communist Party.”

Guo owes his rise in prominence and wealth to a close friendship with China’s former vice-minister of state security, Ma Jian, who fell out of favor with President Xi Jinping and was arrested on corruption charges in 2015. Guo left China during that time. Chinese state media and security officers have since built a case against him, including charges pending for corruption and fraud.

None of that’s kept Guo from building a lavish lifestyle in America, posting tweets and incendiary videos from his 9,000-square-foot apartment overlooking New York’s Central Park. Early in the Trump administration, he became a member of the Trump Mar-a-Lago Club, according to reports. He cultivated business deals with operatives like Bannon, hedge fund manager Kyle Bass, and others with staunchly anti-communist stands. 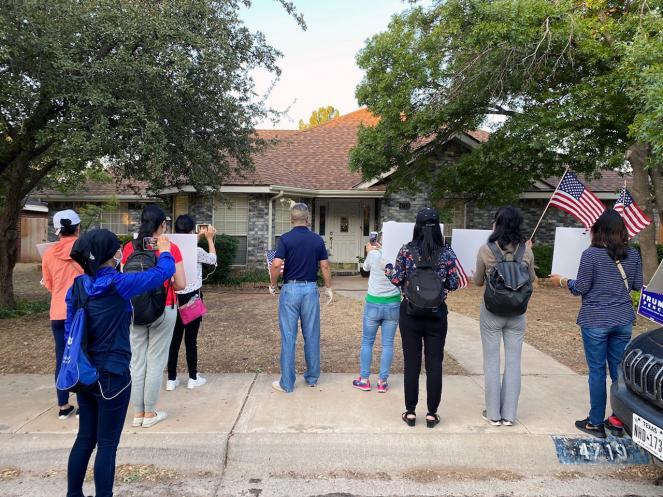 Guo causes chaos everywhere, say those who have followed his peculiar intimidation campaigns. He may hate Xi Jinping, but may also be working for another CCP leader who also hates Xi, and seeding confusion right before a U.S. election.

Guo may be targeting Fu for his ties to other prominent dissidents, his connections inside China, or his access in Washington, said a government source who has been briefed by the FBI on the case but spoke on the condition he not be named.

Fu has met with top officials in the Trump administration, including Vice President Mike Pence and Secretary of State Mike Pompeo. In photos of protesters outside his home, a Trump-Pence sign is visible in his yard. On Sept. 26, when protesters first showed up at his Texas home, Fu was onstage in Washington, D.C., as part of a prayer rally organized by Jonathan Cahn.

“The people Guo has named are all heroes who have fought for democracy and freedom and the rule of law. Why they are being targeted is unclear, but Guo is good at sowing chaos and disruption. With his connections in the U.S. and with the Chinese Communist Party, his repeated incitement to violence is a serious matter that must be addressed by the highest levels of the FBI,” said the government source.

Fu told me the campaign is “very sophisticated” and he’s convinced the CCP is behind it.

Some protesters showed up with American flags, and they livestreamed the demonstration outside his home while also highlighting COVID-19 and other issues in the signs they carried: “It’s like the CCP branch of Antifa,” Fu said, “and they are taking advantage of our freedom of speech to destroy ChinaAid, to threaten me and my family.”

—WORLD has corrected this story since its original posting. On Sept. 26, Bob Fu was at a prayer rally in Washington, D.C., hosted by Jonathan Cahn.

Guo Wengui should be charged with conspiracy to commit civil rights violations and deported!

FC, I'm confused. Your comment seems to be a reply to Xion (being indented under that comment), yet you quote and seem to castigate Steve SoCal. Who is the "she" that you refer to? Mindy? Steve SoCal (whom I assume to be a he not a she)? What is the "other party"? What is the "reigning party"? Please help me understand the first part of your comment.

Thanks, Mindy, for shining light on this.  It's disgusting!  We need to have stronger screening and scrutiny of all foreigners coming into the United States whether wealthy or not.  We're facing enough deluded, deceitful, aggressive, anti-American, far-left and pro-Marxist/Communist agitators among our own people without importing more.

I hope the Justice and State Departments are wide awake to it and digging up the truth. This is another reason the coming election is not just about Trump and his personality.  If we get rid of him, we also get rid of some excellent people like Barr and Pompeo who actually stand for what is right, true, and good.  And the Democratic party will fill their seats with people who's main qualifications are being pro-abortion, pro-LGBT rights, etc.