During a recent police siege of a Hong Kong university, some community members offered spiritual intercession

On Nov. 17, police surrounded the campus of Hong Kong Polytechnic University (PolyU) in Hung Hom and launched one of the fiercest confrontations with protesters since Hong Kong’s pro-democracy demonstrations began in June. Protesters’ Molotov cocktails, bricks, and bows and arrows went up against police officers’ tear gas, rubber bullets, and sponge grenades.

During a siege that lasted nearly two weeks, police arrested more than 1,000 protesters from the campus. Other protesters made daring escapes, crawling through sewers, rappelling from a bridge to awaiting motorcycles, or scaling fences. Participating in a riot carries a maximum sentence of 10 years in prison, so some students holed up on campus for days, hoping to avoid arrest.

By Saturday, Nov. 23, about 30 protesters remained inside the PolyU campus. But although they tried to stay hidden, they were not forgotten: Outside a police cordon by the university, a group of 30 people gathered and prayed for the safety of protesters still trapped inside. Participants wept and raised their hands as they prayed and sang, “Shalom, my friends.”

Pastor Roy Chan, the founder of Protect the Children, led the prayer meeting at Hung Hom station. The meeting included a Q&A on the situation at PolyU, and attendees asked how many people were still inside the school, whether they had enough food, and how they were faring. “Even if there’s just one student left, we still keep praying for them and that God—with His protection—would help those students, so they can leave safely,” Chan said, clutching a small wooden cross. 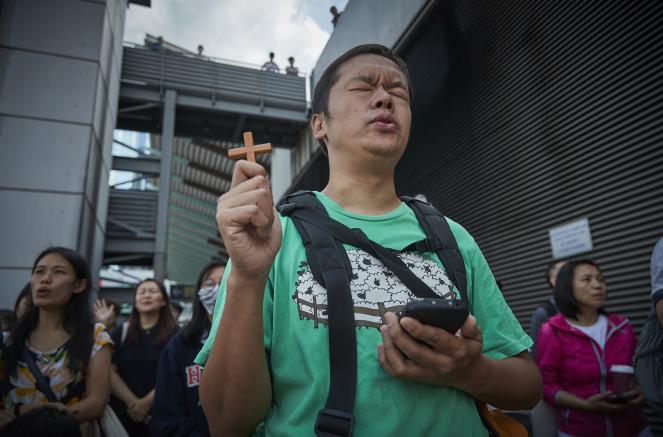 The father of a young daughter, Chan encouraged participants to bring their children to the prayer meeting. He said it was important for the next generation to know “what the police have been doing and their wrongdoings.”

Standing with her son, attendee Angela Au, 34, shared with the group that her 4-year-old had seen a sticker with the protest slogan “Fight for Freedom” and asked if the protesters wanted freedom.

“Children see a lot of information in the news every day,” Au said. “As parents, how do we explain to them? … We may not be able to fully explain what’s happening, but I bring my son to this prayer meeting so he can learn in God’s presence. I want us to look to God together.”

The prayer meeting was also a way to let protesters at PolyU know there were people who love them. Chan noted that many protesters come from single-parent homes, and some have families who have given up on them.

Over inside the PolyU campus, a masked protester spoke with reporters, saying he had come to the school, where his friend was a student, to help out with cleaning for the protesters. But once police surrounded the school, he was stuck. He remained because he felt the minute he stepped off the campus, police would arrest him, even though he didn’t do anything wrong, he said.

When asked if his parents knew where he was after he’d gone missing for a few days, he responded, “My family definitely doesn’t know. … We don’t live together. Our relationship isn’t very good.”

Hong Kong police ended the siege of PolyU on Nov. 29 after sweeps of the 23-acre campus revealed all the protesters had left.

—This story has been updated to correct the name of the area where Hong Kong Polytechnic University is located.

The proportions of Americans and Canadians with a negative view of China have jumped sharply in the past year, reaching the highest levels since the Pew Research Center began tracking such info. According to the center’s latest poll, 60 percent of Americans hold an unfavorable opinion of China, up from 47 percent in 2018. But opinion was divided among the 34 countries Pew surveyed: In Russia, 71 percent of poll respondents viewed China favorably. —Daniel James Devine