Tensions over the Hong Kong protests have been on a low simmer on New York’s college campuses, where 40 percent of international students are from mainland China, according to the Institute of International Education. Less than 1 percent are from Hong Kong.

New York institutions of higher learning have insisted that they remain places for open debate over the Hong Kong unrest. But human rights activists have long worried about the influence on American schools of campus groups tied to the Chinese government, such as the Chinese Students and Scholars Association and Confucius Institutes. 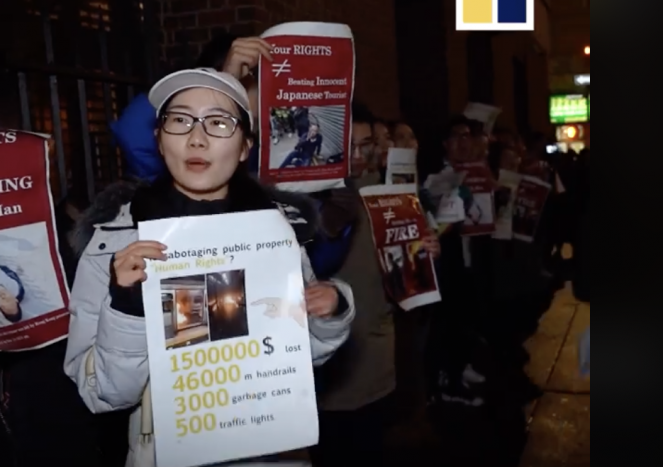 On Monday night, in near-freezing rain, a few dozen protesters clashed outside of an at-capacity New York University School of Law event where two prominent Hong Kong protest supporters and a human rights lawyer were speaking. Nathan Law, who was jailed for his role in the 2014 Umbrella Movement, spoke alongside his associate Jeffrey Ngo and NYU Law professor Sharon Hom.

The executive director of NYU Law’s Bernstein Institute for Human Rights, Sukti Dhital, introduced the event and noted that the center’s mission is focused on “defending dissent and promoting legal empowerment.”

Despite the tensions outside the venue, police kept the peace. Inside, Law tried to explain why the campus protests in Hong Kong are not so peaceful anymore.

In 2014, “there was so much hope that they could get something out of it,” said Law about the original Umbrella Movement. “Now they are so desperate.”

The previous week, Columbia University canceled a student-organized panel discussion about China’s human rights abuses, prompting the panelists to issue an alarmed statement warning of China’s role in silencing speech on American campuses. But according to Columbia, the only reason the event couldn’t go forward was that the organizing students hadn’t reserved a publicly accessible venue for the talk.

Columbia had said it was open to hosting such an event in the future as long as students properly reserve a venue, and previously this semester it hosted prominent Hong Kong activist Joshua Wong. There have been demonstrations at these events, but nothing shocking. Meanwhile, Chinese students here in New York are hopefully marinating in a society where speech and belief are not repressed.

Greg Thornbury, former president of The King’s College, says a new law in Massachusetts is a wake-up call for Christian colleges and universities in the red.

The new law allows the state government to annually review which schools are at risk of closure, and gives the state authority to require contingency plans of troubled schools. I did a piece recently about the financial plight of many Christian colleges, focusing on Nyack College, which is deeply in the red.

For men, the steepest increase in suicide between 2012 and 2015 occurred among those in the fields of arts, design, entertainment, sports, and media, according to a new Centers for Disease Control and Prevention report analyzing suicide rates by industry. In the sector that includes those fields, suicides jumped by 47 percent overall during the 2012-2015 period. That increase is dramatic partly because that sector is relatively small. The “construction and extraction” industries still account for the most suicides by far among men.

Comma Queen videos, where a longtime proofreader at The New Yorker goes over style and grammar rules.