An Austin baseball program provides gospel-centered mentorship, fun, and hope for kids in the inner city

In 2009, Matt Price was 23 and had recently moved to Austin when a friend asked him to help coach the baseball team at Reagan High School, an academically failing school where Price found discouraged players and a ballfield full of weeds and potholes.

The baseball team told him they had nowhere to play during the summer, so Price and a friend organized a summer team. In the process, they built relationships with the players—many of whom had no fathers at home—and talked about the gospel.

Since then, RBI Austin has flourished, growing from 100 kids in 2011 to nearly 1,500 in 2019, with 350 coaches and 200 other volunteers. Price started it to provide mentorships and opportunities for kids in East Austin. Still, it’s sometimes a challenge to help kids growing up in difficult circumstances.

"Our hope is to give people an avenue to engage in relationships with people who are different than them."

RBI Austin offers baseball and softball teams, one-on-one mentoring, and discipleship groups that meet in coaches’ homes. Teams pray together before and after games and study Biblical lessons during practices. Coaches frequently drive players to and from games. Price said he has seen “more fruitful conversations and growth in car rides than even on the ballfield.”

Many kids in the program come from low-income or single-parent homes. RBI coach Jimmie Naumann said players sometimes disappear from the team suddenly because a parent is struggling with an addiction. These situations make coaching harder, he said. He remembers one 7-year-old boy whose mother was an addict: “You could just see it wearing on the kid. … We just tried to do as much as we could to just take that kid in and love him.” 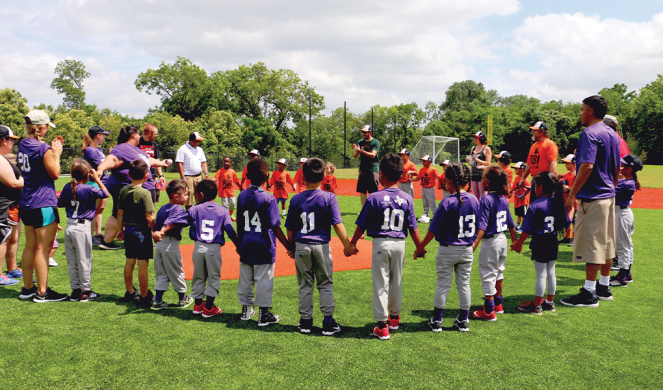 Darius Stewart, a sophomore who plays shortstop for one of Naumann’s teams, said he’s been playing baseball since he was 3. “Most teams don’t give you a chance,” he said. “You mess up, you out of there.” But he sees a difference at RBI and appreciates “having coaches that actually want to be out here.”

Andrew Cyphers, a high-school freshman who has played at RBI Austin since age 4, said the coaches have helped him learn to manage his emotions. On the field: “I don’t slam my bat or my helmet when I strike out.” Off the field: “At school, if someone’s messing with me, I know how to handle it and not get mad and beat them up.” When conflict arises, he said, he takes a few breaths and leaves to find his friends.

Connecting baseball skills to normal life is a theme at RBI Austin. After bad innings, Naumann reminds the boys they’ll also have bad days at college and work. “You got to power through it,” he said. “It’s all about making adjustments and keeping your chin up.” He and the other coaches have been helping their high-school players apply to colleges.

Last summer, when the COVID-19 pandemic stopped youth sports in Austin, RBI Austin stayed in touch with players through its discipleship and mentoring program. It also launched a fundraiser: Donors gave $47,630 for grocery gift cards and laptops for 155 needy RBI Austin families. When restrictions lifted, 61 RBI Austin teams played a short season before the city of Austin shut down baseball fields in early July.

Last summer’s race protests hit home for many of the minority players and their families. For years, East Austin kids have not had the same access to sports and quality education as wealthier parts of the city, said Price. In November 2020, RBI Austin hosted a series of events over Zoom to discuss racial justice from a Biblical perspective.

Price says: “As we see these protests in our very city, our hope is to give people an avenue to engage in relationships with people who are different than them.”