A car pulls up in the quiet morning darkness. Headlights flick off. A woman steps out clutching an object in her right hand and heads quickly across the lot toward two other women waiting for her. Their mission: pickleball.

Only if you’ve been camping in the ­wilderness for a few years could you miss the pickleball craze sweeping the country. Cities are building pickleball courts and hosting tournaments. Popular pickleball shoes are back-ordered at sporting goods stores. Check out Pickleball Magazine—there really is one—for stories about how the pickleball family that plays together, stays together. There’s even a new ­professional pickleball league backed by investors and celebrities like retired NFL quarterback, Drew Brees.

On fashion and culture magazine covers, the Kardashians and their ilk keep showing up with a pickleball racket in hand. But ­forget the celebs: Everyone from your neighbor’s teenage daughter and her parents, to college kids between classes, to seniors at local community centers are hitting the courts. Why?

I asked my friends Chris Vaage, Karen Senn, and Nancy Kullas, all in their 50s, to explain what attracted them to the game. The four of us meet twice a week at 7 a.m. to beat the crowds to the new pickleball courts in Stillwater, Minn. One recent morning, with the sun still rising as a full moon faded away, my friends paused for a spirited group-download about the joys of the sport:

“It’s just plain fun and super social … It’s easy to learn, but you can always improve …It’s lighthearted, not intense, but can get competitive, too … I get great exercise … I started playing to connect with my 20-something kids … All ages can play together … It’s available almost everywhere now—and it’s cheap! … I’ll play ‘til I croak.” 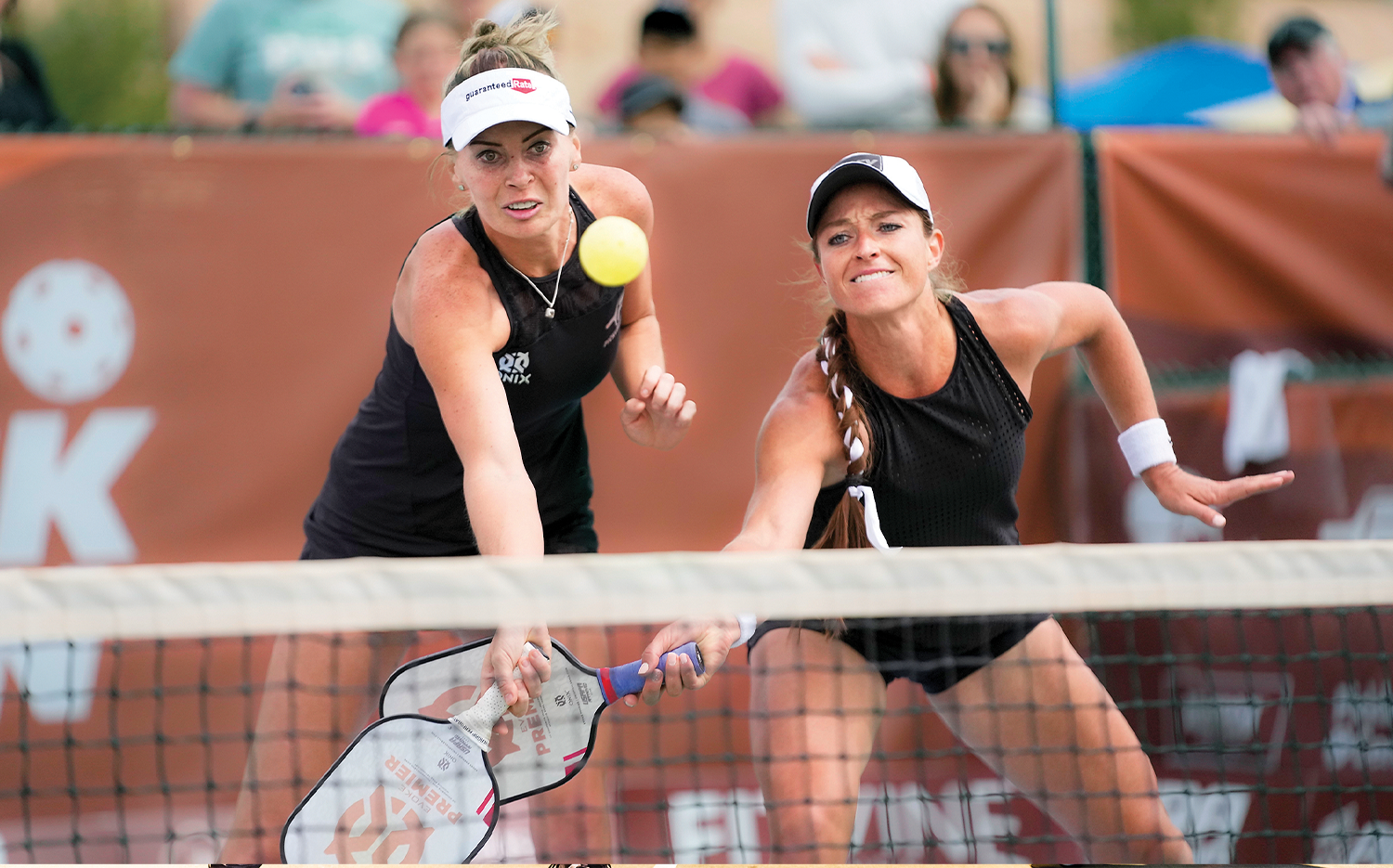 These women admit they’re addicted. But the only support group they want is right here. Impatient to begin, they start thwacking the neon green ball back and forth over a 3-foot-high net on an area about the size of a badminton court. They chat about grandkids and a niece’s wedding in between banter and laughter over missed shots. Each strategically tries to knock returns out of reach. When a ball zips by one player, she reacts: “Oof! Nice one!”

Despite its sudden popularity, pickleball has been around for nearly six decades. I talked with Kate McCallum, daughter of one of the game’s originators, to get a history lesson. In 1965, when Kate was 7 years old, Joel Pritchard and his buddies, Bill Bell and Barney McCallum, created the game in Pritchard’s backyard in Bainbridge Island, Wash. At first, they hoped to teach their kids how to entertain themselves, but the adults soon monopolized the court. They started with pingpong paddles, wiffle balls, and a badminton net, ­making up rules as they went. They created a no-volley zone, or “kitchen” in pickleball parlance, near the net to keep McCallum from repeatedly ­spiking the ball.

Neighbors, hearing happy shrieks from Pritchard’s backyard, wanted to play, too. Then Pritchard, a Republican congressman, set up pickleball courts at Seattle political events. A New York reporter wrote about the new game with the funny name. McCallum began getting requests for pickleball sets. He reproduced photos of friends and family playing the game, stuck them on boxes, and for $29.50, mailed off sets of four plywood paddles, balls, and a ­badminton net. Soon, gym classes introduced kids to pickleball. Slowly, the fast game nearly everyone could play spread nationwide, then further. The International Federation of Pickleball now boasts more than 60 member countries, and there’s even talk of ­getting pickleball into the Olympics.

Today more than 35,000 courts dot the United States. In 2021 and 2022, the Sports and Fitness Industry Association deemed pickleball the ­fastest growing sport in America with nearly 5 million players—and plenty of untallied neighborhood players. Some California prisons include it alongside basketball, and in Washington state, where it all began, it’s the state sport.

But what about its funny name? Controversy still surrounds that part of the origin story. One version says Pritchard’s wife, Joan, named it because it’s a mish-mash of other games—especially tennis and pingpong—reminding her of second-string oarsmen rowing together in “pickle boats.” Not a very inspiring tale. Kate McCallum and ­others insist the game was named after the Pritchards’ dog, Pickles, who kept running across the court during games to grab the ball. That’s definitely a more endearing version, though online quotes from Pritchard’s kids say they didn’t get the dog until after the game was born.

Back in Minnesota, the sun’s full up. My friends and I have spent an hour hitting shots down the middle, “dinks” just over the net, backhands, overhead lobs, and net dribblers. Our matches end with paddle taps instead of handshakes, and an enthusiastic “Good game!”

And it is a good game. In a screen-obsessed world, pickleball is bringing people together for fitness and fellowship—along with that increasingly rare find: good, clean fun.