Perhaps one day we can read as history Rania Abouzeid’s No Turning Back: Life, Loss, and Hope in Wartime Syria (W.W. Norton) and be grateful for her meticulous attention to detail and to humanizing a brutal and misunderstood conflict. For now, as the Syrian war grinds on, Abouzeid brings us uncomfortably face to face with its ongoing horror. That hard encounter, plus the persistence of U.S. policymakers and others in doing the wrong thing, is why No Turning Back is our Book of the Year in Understanding the World.

Abouzeid puts to work her own close encounter with civil war in the Middle East. The freelance journalist, who has written for prominent U.S. news outlets, grew up in Australia after her own family fled Lebanon’s civil war in the 1980s. She returned to live in Lebanon as an adult and used her base in Beirut (and ability to blend in) to cross into the war zone undetected via Turkey, starting in 2011.

Inside Syria the author encountered all sides of the escalating conflict. Syria’s civil war quickly morphed from an internal conflict to a regional conflict to a proxy war pitting the Cold War powers against one another. It also grew into an existential contest between the 20th century’s postwar global order and the forces of chaos—in the form of multiplying Islamic jihadist factions. 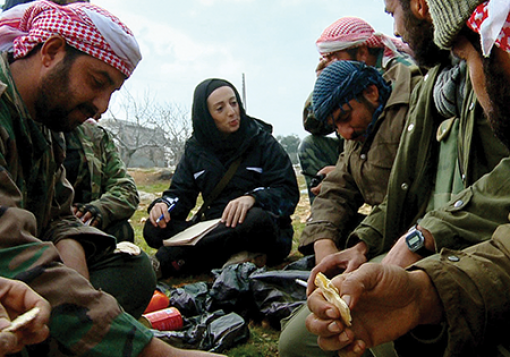 Abouzeid (center) with members of a rebel group in Idlib, northern Syria Handout

Abouzeid recounts enough of the geopolitical terrain to make a dizzying battlefield as comprehensible as war ever can be. She structures the book (353 pages, not counting notes and an index) around the individual stories of Syrians sucked into the mire: “The Syrian War, like every war, is about many things, but at its core, it’s about people.”

Suleiman Tlass Farzat “was a rich man with the right name,” and had no apparent reason to rebel against the Syrian government, we learn—yet the Arab Spring demonstrations drew him in. By day a law-abiding citizen running an insurance office, Suleiman by evening becomes an anti-government activist deploying aliases and multiple Facebook accounts to upload video footage—spiking in new ways a social-media-driven conflict, ways now widely used to deadly effect by terror groups.

We meet Mohammed, a prisoner of Syria’s Bashar al-Assad regime, radicalized behind bars to serve such groups, and Abu Azzam, a university student and a poet who joins the Free Syrian Army. Azzam watches as outsiders hijack his revolution, turning it into “a project cooked up by foreign states and fed to us.”

Bystanders also people No Turning Back, including 9-year-old Ruha, whose village is hit by government-instigated chemical weapons and barrel bombs, forcing her family to make a hold-your-breath escape. Talal is an Alawite whose family was kidnapped in 2013 amid atrocities committed by rebel groups. We could use more of Syria’s diverse and victimized minorities in the book, including Christians, but they are not entirely overlooked.

With the Alawite family we glimpse the tireless work of author Abouzeid, who herself has faced death threats and blacklisting from Syria. She met Talal in Lebanon, where he arrived three weeks after his family’s kidnapping. She also had access to the groups in Syria holding his daughters and infant son (including a rebel unit receiving U.S. weapons). And later she interviews those who are freed.

It’s this level of journalistic enterprise and gritty ground-level storytelling that sets apart No Turning Back from a thick stack of eyewitness books on the war in Syria. We leave it better informed but also better burdened for the human stories and the seemingly inhuman endurance of war-battered Syrians.

(Please read our short list for Books of the Year in Understanding the World.)