Wisconsin mother Stacy Adams was in her bedroom, folding clothes, when her 12-year-old daughter Amy walked in with a smirk on her face. Stacy recognized the look right away. It was the one Amy always wore when she was uncomfortable. With her arms folded in front of her, shoulders shrugged, and in an unusually timid voice, Amy asked her mother to take her to a medical facility.

“She said she was sad and, you know, she felt worthless, and she didn’t know if she was a girl,” Stacy said. (WORLD has agreed to use pseudonyms to protect the family’s privacy.)

Not knowing what else to do, Stacy checked her daughter into an inpatient mental health facility the next day. Amy stayed for eight days and came home angry. “They told my daughter that I was going to be her biggest adversary in all of this, and I would probably never accept her for who she really is,” Stacy said. “So when she came home, I was her enemy.”

Stacy told counselors at the mental health facility what she thought of their treatment plan: “You can call her whatever you want. But I have a daughter, and her name is Amy. And until somebody starts asking her the questions that need to be asked, she’s going to come home, and that’s how I’m referring to her.”

Ultimately, school officials refused to honor Stacy’s request that Amy not be called by the male name and pronouns she had chosen. A school counselor told Stacy the school’s policy was to treat students as the gender they identified with. That meant allowing them to use restrooms and locker rooms associated with that gender and referring to them by the name and pronouns they chose. If Stacy didn’t go along, the counselor said, any harm Amy caused herself would be Stacy’s responsibility.

School officials said they believed siding with children who question their gender—even hiding it from parents—is legitimate. They said they know best how to help students, and that once parents drop children at school, they are in charge. Stacy pushed back. “You know, you don’t get to make those choices,” she told one school official. “You don’t get to make medical decisions for my child. I’m her parent. And they said, ‘Absolutely not. We are going to be an advocate of the child and not the parents.’”

In November 2021, Stacy and her husband joined another couple to file a lawsuit against the Kettle Moraine School District. Stacy’s experience and her willingness to fight back heralded a surge of parental rights claims by mothers and fathers angry over public school administrators pushing a progressive agenda on their kids. But their success in court is far from guaranteed. 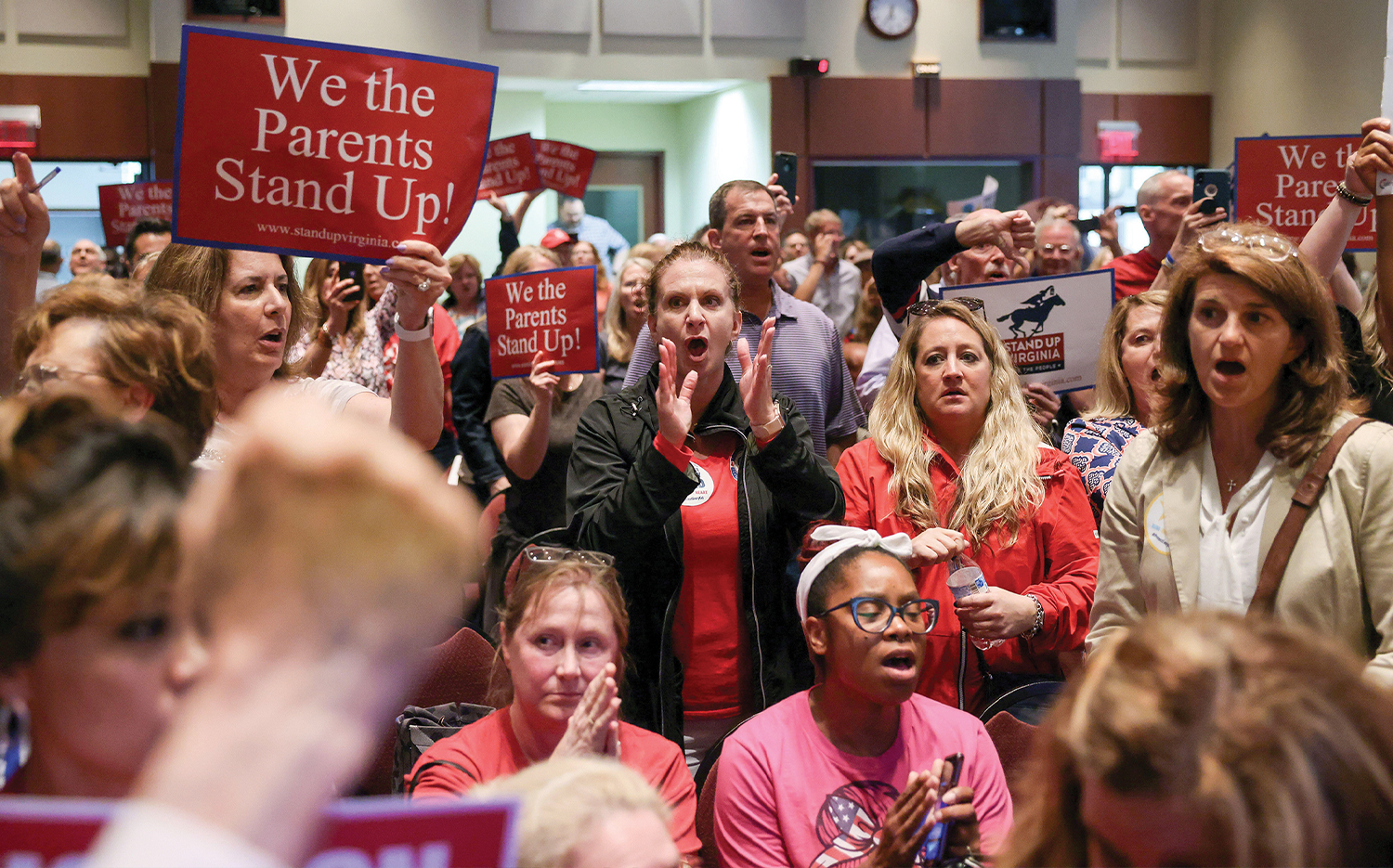 PARENTS’ RIGHT to control the upbringing and education of their children is grounded in the Constitution’s 14th Amendment. It’s not as well known as rights like free speech and free exercise of religion, both guaranteed by the First Amendment. But it should be, said Ernie Walton, a law professor at Regent University School of Law. When faced with challenges from schools, Walton said, parents need to remember they are the final authority: “They still have the absolute right to educate their children, and they don’t lose that right when they enroll their children in a public school.”

Set against this long-standing parental right is a state-­supported educational regime that claims parents’ rights end at the school door. Walton said educators have taken an extreme view of in loco parentis—a judicial doctrine intended to allow the state to step in to protect children in cases of severe neglect or mistreatment.

The Supreme Court has repeatedly recognized the fundamental nature of parents’ right to the care, custody, and control of their children, but Walton said even conservative justices are not united on whether the right is of the same caliber as free speech and religious liberty. Nor are they united on how closely courts should scrutinize school actions that burden that right.

Last year, the high court ruled that a school district violated a student’s First Amendment rights when it suspended her from the cheerleading squad because of profane comments she made in a social media post while off-campus. Justice Samuel Alito said speech that addresses “politics, ­religion, and social relations” “lies at the heart of the First Amendment’s protection” and “is almost always beyond the regulatory authority of a public school.” But Justice Clarence Thomas disagreed, concluding that implicit in the 14th Amendment was an understanding that public schools were “delegated substitutes of parents” through in loco parentis.

Echoing similar curricula in schools across the country, the Virginia county’s educators are required to teach students that “racism” is “the marginalization and/or oppression of people of color based on a socially constructed racial hierarchy that privileges white people.” Matt and Marie Mierzejewski pulled their three children from the county’s public schools after learning about the “anti-racist” curriculum.

“The curriculum redefined racism as exclusively one-sided—the oppression of people of color by white people,” Marie said. “It instructed students that white, Christian, ­cisgender students make up the ‘dominant’ and ‘oppressor’ culture while students of other races, religions, and sexual orientations were ‘subordinate’a and ‘oppressed.’”

Assisted by ADF, parents filed suit in December 2021. They challenged the school’s curriculum on a variety of grounds—including that it violated their parental rights. After a loss in the trial court, the case is now under review by a Virginia state appeals court. The trial court did not address the parental rights issue but dismissed the case because it said the parents lacked standing to bring the challenge.

SINCE THE START of the pandemic, complaints about heavy-handed school policies have multiplied. Nicole Neily launched Parents Defending Education in March 2021. The group has logged 50-200 tips per week since then and now has a map of “incidents” stretching across the country’s 13,500 school districts.

And complaints are coming not just from more liberal urban centers but from rural areas. In August, Parents Defending Education filed a lawsuit against Iowa’s Linn-Mar Community School District, challenging a “parental exclusion policy” that bars teachers and other school employees from disclosing a student’s “transgender status” to parents unless that student specifically authorizes it. The policy states that “any student in seventh grade or older will have priority of their support plan over their ­parent/guardian.”

“We’re now seeing schools that are deliberately undermining families, trying to usurp the role of the family and set children against their parents, implying that families are not safe for children to come out to and talk about these issues,” Neily said, pointing to policies like Linn-Mar’s as proof.

Lawsuits in Wisconsin, Virginia, Iowa, Georgia, and Maryland are the leading edge of a series of legal challenges by parents stretching from California to Florida. Most are in the early stages of litigation. Courts have dismissed several on grounds that parents lack standing. But on Aug. 18, a federal court in Maryland went further, dismissing a claim brought by parents on grounds that a Montgomery County gender transition policy does not rise to the same level of legal scrutiny as a free speech or religious liberty claim.

But perhaps the strongest expression of support for parental rights came in a recent opinion from the Wisconsin Supreme Court. In its 4-3 ruling in early July, the justices agreed with a trial court ruling that required parents proceeding under pseudonyms to disclose their names to the court and to law firms representing the school district. But they expressed no opinion about whether schools could hide students’ gender transition plans from their parents. That gave opponents hope at least one of the justices in the majority might eventually side with parents at trial.

Regent’s Walton agrees. “I’m hopeful as these cases get litigated, that we will win almost uniformly on that issue,” he concludes. “But it’s taking its time, and we’ll see what happens.” And ultimately, he said, the Supreme Court will have to weigh in.

Back in Wisconsin, two weeks after leaving in-patient treatment, 12-year-old Amy Adams decided she was a girl after all. While her daughter is much better, Stacy’s not dropping the lawsuit. “If I was ever put in a public forum ­situation where I had to hear another parent express to me that they went through what I did, and I had the opportunity to potentially stop it and didn’t, I don’t think I would have ever forgiven myself for that.”

—WORLD has updated this story to correct the vote tally in the July Wisconsin Supreme Court ruling.