The Overflow Café provides a place for Christians to build friendships and make disciples. But keeping the shop open is a struggle

Dudley and Anna Parr sat inside the Overflow Café in Cambridge, Md. The small café was empty except for two workers and a lone customer, Eddie. Rain drizzled down its large windows. Dudley’s cell phone rang: “Hey, bud, what’s up?” He listened for a moment, then asked, “What do you need?” Another pause. “Call the Salvation Army directly and ask them.” He hung up and looked at his wife. A man wanted to borrow a dress shirt, but Dudley is the wrong size.

Such calls are routine for Dudley Parr.

The Overflow Café looks like a typical coffee shop. It has seven square tables and a counter. Potted plants sit on tables and in the corners. Paintings decorate the walls and windows. A large chalkboard menu on the back wall displays prices: sandwiches from $1.50 to $6; a cup of coffee, 75 cents.

But the café offers more than good food at low prices. It’s a place for Christians to build friendships, make disciples, and help bridge economic and cultural divides in this small, historic Eastern shore town. The Overflow Café’s relationship-based model separates it from traditional charities. With few partners or visible results, the Parrs often struggle with discouragement. 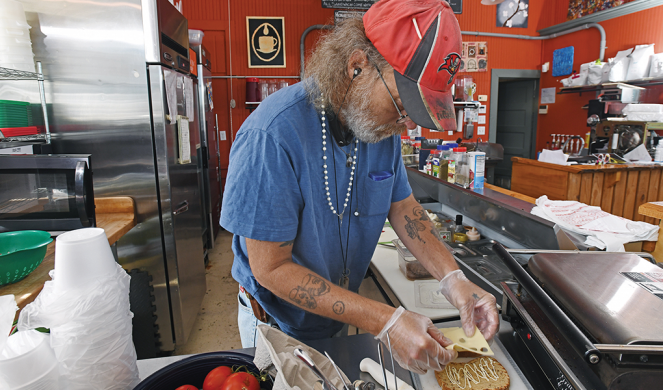 Anthony Airey makes a sandwich in the kitchen. Photo by Kenneth K. Lam/Genesis

THE CAFÉ WAS HATCHED in 2013 when Pastor Brett Adams of Sunnyside Alliance Church heard about a ministry-minded coffee shop in Pennsylvania called Uncommon Grounds. He thought it was a model that would fit Cambridge, a town of 12,300 that boasts a rich Colonial and Native American history but lost jobs in the 1960s and ’70s. The town suffers deep racial and socioeconomic divides. Many residents survive on government welfare or disability income. Since Adams was preparing for overseas missions work, he needed the right person to lead the new effort.

Dudley Parr, now 62, seemed like the perfect person. Parr, a former atheist, had taught high-school science and operated an outdoor program for troubled teens. He felt called to ministry and attended seminary at age 50, where he met his wife, Anna. Together they started volunteering at Uncommon Grounds, where Brett Adams met them. Adams asked Parr to move to Cambridge to head up Overflow Café. The Parrs moved in 2014.

At that time the Overflow Café was just a kitchen and counter with a few outdoor tables in a strategic location. Its red-tile roof and swinging “Overflow Café” sign make it visible from the street. It straddles two neighborhoods: the touristy business district with scenic parks along the Choptank River, and an older neighborhood of yardless, often overcrowded rental houses with patched roofs. “It’s not a violent neighborhood, but it’s not the nicest,” Dudley said. “Within 400 yards, you could probably score any kind of drug you want.”

The café’s central location, low prices, and quality food attract all kinds of people. It also hosts movies, open mic nights, and Alcoholics Anonymous meetings. In 2017, the Parrs enclosed the counter to form a modest dining room with tall windows. 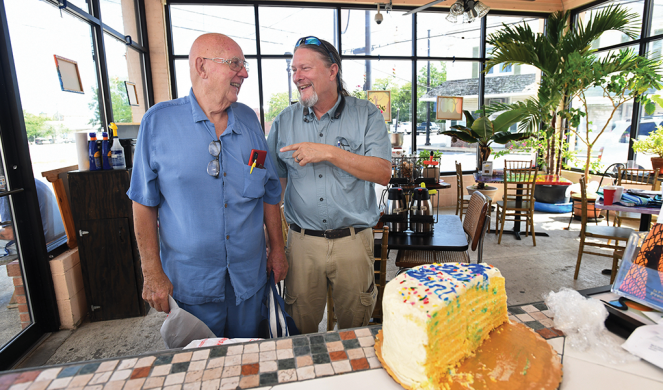 Charlie Powell (left), who came to faith in Christ through Parr and his Bible studies at the café, brought a cake to share. Photo by Kenneth K. Lam/Genesis

UNTIL COVID-19 ARRIVED, Overflow Café hosted an open mic night every Friday. Levin Lewis, 26, would often bring a couple of guitars into the spacious garage that shares a tiny parking lot with the café, and at 6:30 p.m. open the garage door for guests. Parents with kids, elderly neighbors, and even homeless people came to play the café’s guitars, keyboard, or ukuleles and listen as others took their turns. Lewis loved the diversity of the crowd and the performances: “You never know if it’s going to be musicians, poets, spoken word, or what.”

Lewis runs a movie prop and special effects shop across the street. When the café opened, he walked over to check it out: “They told me about their mission here. Right away I was all about it.” With open mic nights paused for the pandemic, Dudley Parr recently started a Bible study in the garage for Lewis and a few of his friends. They meet on Sundays and discuss a passage of Scripture over a meal. Parr described the studies as “get your questions answered” groups.

The Overflow Café creates opportunities for reciprocal relationships, which sets it apart from traditional ministries to the poor. Eddie, a formerly homeless man with a long gray beard and faded peaked cap, helps fix the kitchen equipment. Anthony, a neighbor with social anxiety, works in the kitchen. If a homeless person wants food, he or she can work a shift in the café to earn a meal. Dudley often connects struggling friends with friends who can help, like mental health counselors or Salvation Army shelter workers. Dudley introduced Eddie to another homeless man, Frank Austin, and together the two are able to afford rent on the house next door. 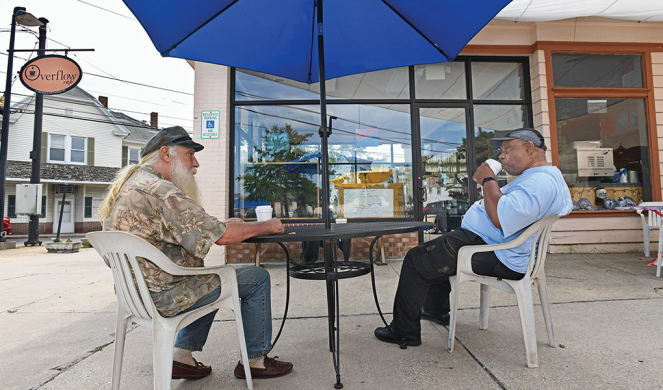 BUT EVEN MORE IMPORTANT is connecting struggling sinners to the God who can save.

One of the first people the Parrs met was Ruth Andrews, a “notorious drunk.” Through conversations with the Parrs and attending a Bible study, Andrews came to know God. She told God that she wanted to serve Him but felt Him saying, “I can’t use you like this.” Andrews responded, “Then I’ll quit.” When she finished alcohol rehab, the Parrs invited her to live with them. Andrews read the Bible and Christian books in Dudley’s library, asking questions about what she read when Dudley or Anna drove her into town. “She was hungry to know more about God,” Dudley said.

When Andrews’ drinking buddies found her, she encouraged them to get sober. They started saying, “If Ruth can do it, I might have to.” Andrews asked the café to host AA meetings and met with friends to answer their questions about God. “It’s a domino effect,” said Dudley. “My wife and I are not the only evangelists now.”

Dudley also befriended Blaine Purkey, one of six addicts and alcoholics who shared an apartment near the café. For three years, the two men talked about God. Purkey knew Scripture well but did not believe that God loved him. Over time, the patient love that Dudley showed him took root. Dudley took Purkey to rehab twice, and after the second time, Purkey said, “I guess God really does love me. I should probably get baptized.” Dudley baptized him, and Purkey defied the expectations of his fellow addicts and got sober.

A year and a half later, Dudley sat in the café with Purkey’s friends, holding a makeshift memorial service after Purkey died of a heart attack. So far, Dudley has done memorial services for three people, including Ruth Andrews, who died two years ago of esophageal cancer. That part of the work is difficult, he said, but “to be able to give the eulogy and say, ‘I know I will see him again,’ to feel confident where they were in their faith, to be able to hear from other people the change that became obvious in their life. Those are some of the successes.”

“To be able to … feel confident where they were in their faith, to be able to hear from other people the change that became obvious in their life. Those are some of the successes.”

SOMETIMES THE LACK of tangible success is discouraging. Dudley has had many conversations about God with Eddie, an agnostic, and Anthony, who refuses to attend church. It takes patience to work with addicts. Dudley has dropped the same people off at rehab multiple times. “Watching people fail takes a toll,” said Dudley. “Watching people fail repeatedly because they’re doing the same thing.”

Parr says some Christians don’t understand what the Overflow Café is trying to do, and some church volunteers are naïve. They believe sob stories people tell them and want to give money even when Dudley warns them: “You give him that money, and I promise you he’s going to be high for the rest of the week.” Even Sunnyside Alliance Church does not always understand, Dudley said. The country church 10 miles away has a different ministry style and deals with a different demographic than the downtown café.

The café struggles with perpetually tight finances. Sunnyside gives money to supplement the café’s revenue, and all the workers are volunteers. The Parrs raise their own support, live in a donated house, and drive donated vehicles so the café’s budget can cover its rent, utilities, and equipment. When the pandemic began this year, the café had to close its dining room. “In March we had enough money to cover April, but we weren’t sure we’d be able to stay open in May,” said Dudley. The team decided to go out with a bang and serve “pay-what-you-want dinners” four nights a week.

By midsummer they were giving out 12-16 meals a night. The kitchen spilled into the empty dining room: A cart holding pots, rectangular tins, and a slow cooker sat along one wall, and boxes of plastic bags and aluminum foil dispensers cluttered the counter. Somehow, month by month, they had enough money to operate. Someone gave them $100, and another person donated a stimulus check. A church they did not know donated, with a letter of encouragement.

Trusting God with the uncertain future is a challenge, but not a new one for the Overflow Café. “The challenge has been learning to trust God for the money that we need when we need it,” Dudley Parr said. “That’s a constant surrender.”

—This story has been corrected to note Overflow Café hosted open mic nights every Friday.