Martha Johnson could barely believe it when the therapeutic equestrian center in Dallas called to say her 19-year-old daughter was sitting on a horse, and they had just jumped over an obstacle together. The year was 1998, shortly after brain surgery left Stacey an invalid, having to relearn almost everything, including how to walk and how to ride a horse again. Doctors had cautioned that Stacey would likely always be wheelchair-bound, so news she was riding a horse blew Martha away.

“I’m amazed at what horses have done for her,” Martha said remembering that moment and many milestones since. “But Stacey has sheer determination.”

Stacey Johnson was 12 when doctors diagnosed her with Van Buchem disease. Fewer than 30 people have ever been diagnosed with the debilitating chromosomal anomaly that causes unregulated bone growth. Among other issues, Van Buchem disease causes ongoing thickening of Stacey’s skull, squeezing her cerebellum. Often she has excruciating headaches. Even a minor sinus infection increases intercranial pressure, causing migraines that may knock her flat for weeks. She lacks hearing completely in one ear and 85 percent in the other. Stacey also has vision problems that keep her reliant on thick-lensed glasses.

While Van Buchem disease has wreaked havoc on her body, it hasn’t stopped her, even at age 43, from living joyfully, purposefully, and competitively. She literally has ridden above her difficulties, including after a global organization’s boomerang decisions to first allow, then disallow, and then, at the last minute, allow her to compete at an important international event.

As we talk, Stacey sits up close, watching and listening intently, trying not to miss a word. But when she sits astride a horse, it’s hard to notice any disabilities. Stacey herself declares exuberantly, “Riding into the arena, I’m just like everybody else!” It’s impossible not to smile watching a video of Stacey confidently riding her horse, guiding it around the arena through prescribed patterns and gaits.

Stacey climbed onto a saddle for the first time shortly after her original diagnosis and immediately fell in love with riding horses. Martha calls it “the blessing that changed her life.” With a riding instructor, she quickly learned to walk the horse, canter, and even jump.

Soon, she began physical therapy that integrates equine movement (hippotherapy) to improve her strength, balance, and functional independence. That, combined with her horse fervor, got Stacey walking again after the surgery left her incapacitated. Martha says she sees God’s blessings behind it all.

Several doctors had confirmed Stacey needed the surgery—clipping her brain’s cerebellar tonsils—to relieve pressure on her brainstem and spinal cord and create more space for her squeezed cerebellum. But even after post-surgical MRIs and spinal fluid checks, no physician could determine why Stacey awoke unable to walk or even sit up.

And none of her doctors can fully explain how Stacey now walks and rides again so well.

Her mother knows the day may come when Stacey has a headache so severe and interminable that surgeons may need to enter the front of her skull to give her brain more space, but she’s hopeful that is many years away.

Weekly, Stacey still goes to the therapeutic horsemanship center to work with her physical therapist, Sandy Ehrett, who uses hippotherapy each session. Sandy says Stacey is a joy: “She makes people feel valued—she’s genuinely interested in others and remembers little details about them. And I love that she loves to laugh!” She mentioned how committed Stacey’s family has been and the sacrifices they’ve made to ensure Stacey gets all she needs to be able to participate in so many activities, despite her challenges.

Martha advocates for Stacey, coordinates her busy schedule, attends events with her, and finds new pursuits to enhance her daughter’s life. Stacey’s sister and aunt sometimes help, too. Stacey’s father, Jerry, is blind and diabetic, so he can’t always be at events but encourages all Stacey’s endeavors. At one point, the family moved to San Antonio for three years but returned to Dallas because of its exceptional riding and therapy opportunities. 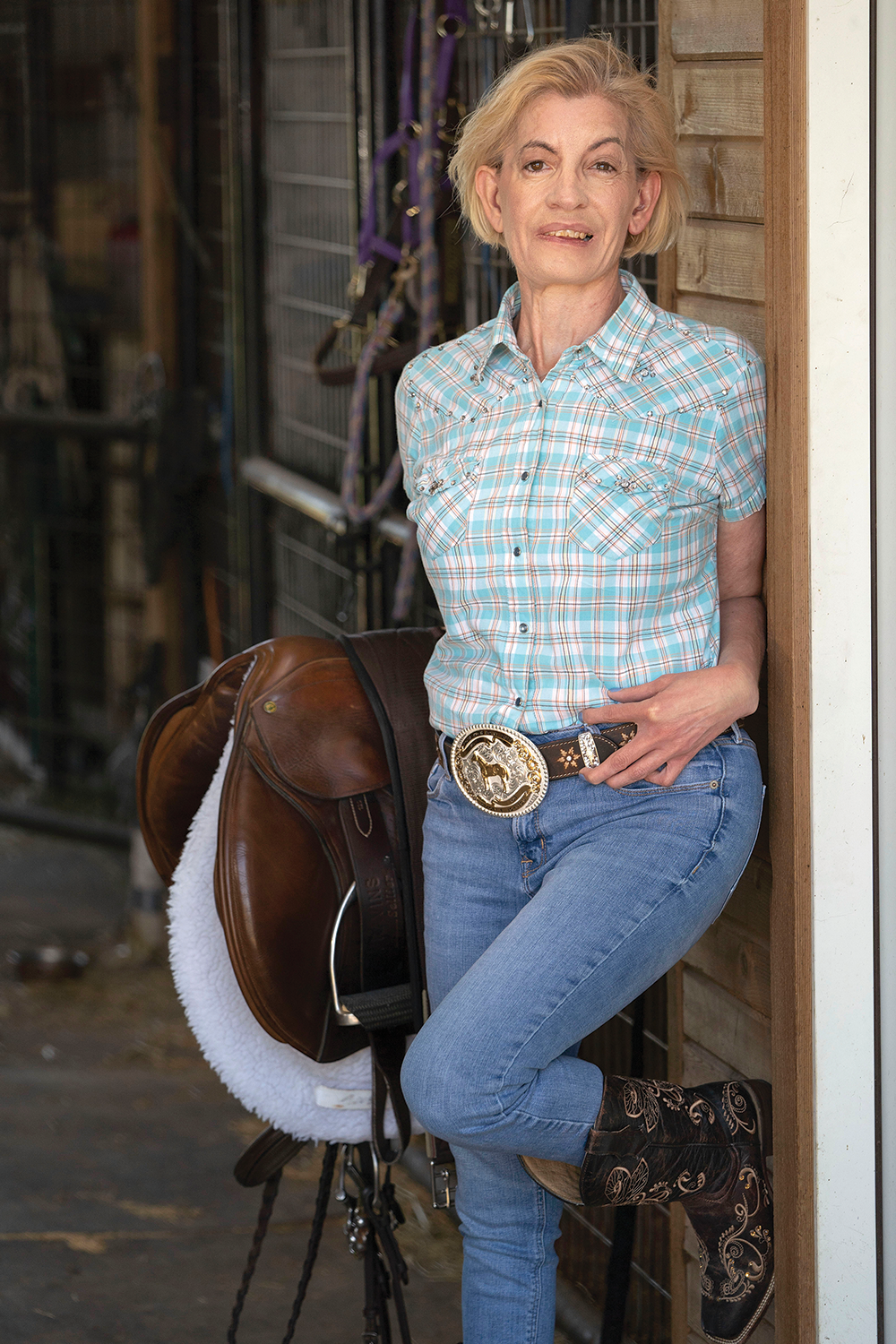 NOT LONG AFTER STACEY learned to ride, her riding instructor entered her in a competition—just for fun. Some of the competitors rode $100,000 horses. Stacey showed up with a therapeutic riding horse. When Stacey won—against able-bodied riders—she and her mom knew she’d found a niche: Stacey wanted not only to ride, but to compete.

Among other awards, she won gold and bronze medals at the 2003 Special Olympics World Games in Dublin, Ireland, despite having to ride a luck-of-the-draw enormous draft horse. “She looked like a little flea on a big dog,” laughs Johnson.

She recounts how during one event of the competition, Stacey, whose legs aren’t that strong, kicked the horse’s sides so often trying to get the behemoth moving forward that soon all the people in the arena started stomping the bleachers to help.

Stacey laughs, too, and says she still remembers looking down at the horse’s huge head. Then she focuses on how kind the Irish people were and how green the grass was in Ireland. She talks about a volunteer who gave them a tour of a Dublin courthouse “where the judges wear funny wigs, and everyone was so nice.”

Riding increased her confidence and strength to compete in track; she won two golds and a silver at the 2018 USA Games in Seattle. This May, at the Special Olympics Summer Games in San Antonio, she won a gold in the 100-meter walk and fourth place in the javelin throw. Also in May, she took a gold, silver, and bronze at the Equestrian Summer Games in College Station, Texas. “The horses, the people, the competition … it all keeps Stacey going,” her mom says.

Stacey grins and says she competes in bocce ball, too, and loves to dance at organization galas and Special Olympics events and parties. Once, she rappelled down a 16-story building for a Special Olympics fundraiser. 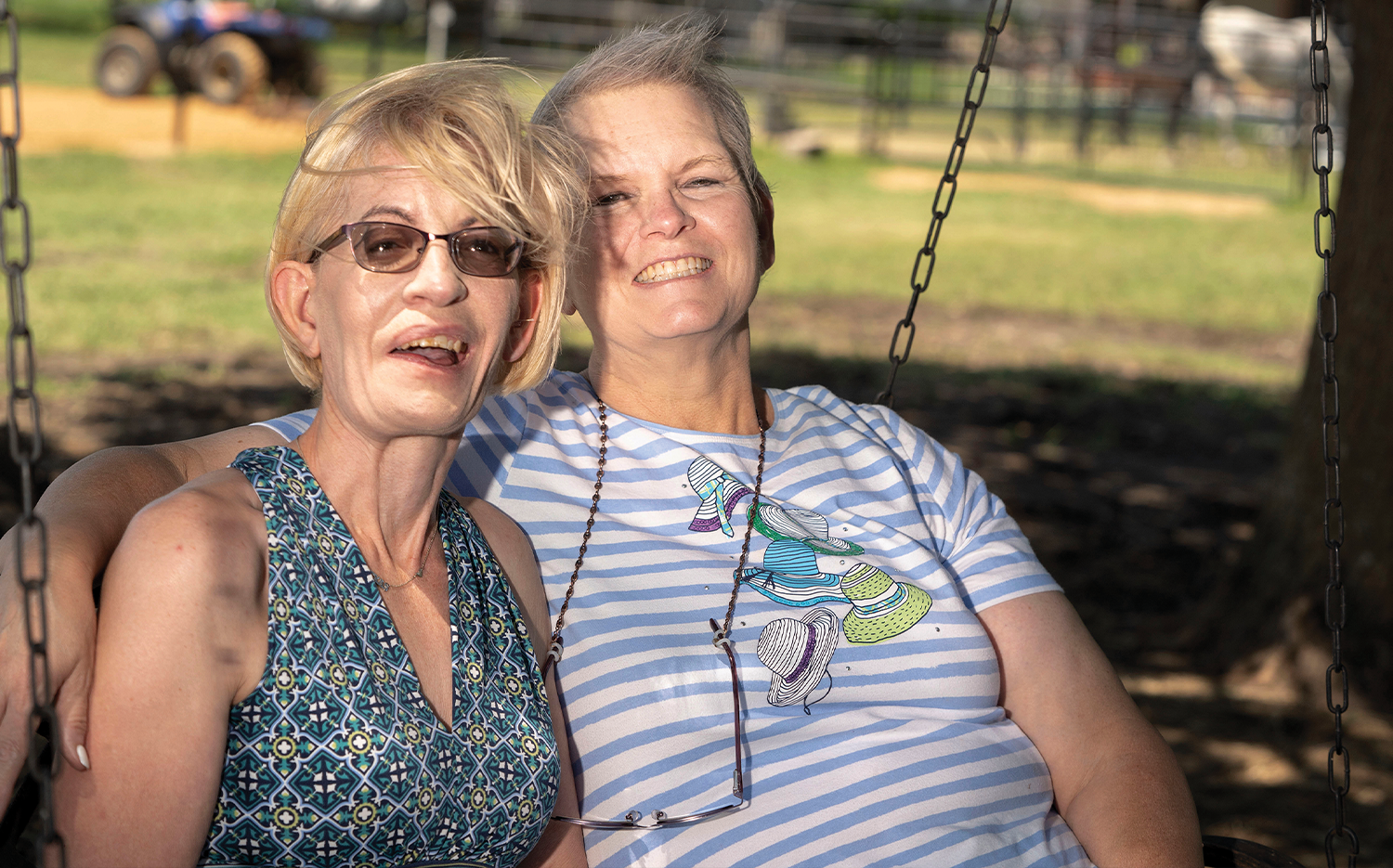 Stacey and her mom, Martha, at a farm north of Dallas Photo by Matthew Miller/Genesis

ENTHUSIASM TUMBLES OUT out of Stacey when she talks about horses: “I have met so many people because of riding! I have so many friends now!” Before discovering riding, she says she had few friends because she couldn’t do the same activities as classmates. She couldn’t perform on the drill team like her older sister, either. Few activities could accommodate anyone with disabilities like hers.

Johnson says Stacey hardly talked before horses opened her world. Now she’s a Special Olympics global messenger and regularly gives speeches—over 200 so far—promoting the organization and how riding transformed her life. Stacey tells about two trips to Washington, D.C., where she met legislators and encouraged them to vote for bills that support the Special Olympics.

“People seem to really connect with Stacey,” Martha says. “She listens to them, and they listen to her. She loves talking. She has more friends than anyone I know.”

But recent, ever-changing decisions by the International Special Olympics Committee created great distress for Stacey. When she found out last year she’d been chosen for the USA Summer Games in Orlando, June 5-12—the first time equestrian would be an official sport at nationals—the international organization had no requirement for COVID-19 vaccinations. The Texas Special Olympics also had no such mandate.

Then in December, six months after they’d chosen her, the ISO abruptly changed its rules, decreeing all participants had to be vaccinated, despite falling numbers of coronavirus cases nationwide. Ironically, Florida had some of the least restrictive coronavirus policies, And Florida Surgeon General Joseph Ladapo has said parents have the right to question whether their children get the vaccine.

Because of Stacey’s severe health issues, doctors warned her not to get the shot. She’s had bad reactions to other vaccines, and physicians said her health conditions could be critically exacerbated by a COVID shot. Also, Stacey had COVID-19 in 2020.

Despite pleas to the organization and letters and calls to legislators and others of influence, the ISO did not respond to Martha. She says Texas state Senator Angela Paxton also tried to have her staff encourage the ISO to change its policy, but officials wouldn’t budge, so Stacey forfeited her spot at the Summer Games.

She had already raised money to go, paid her fees, booked a hotel room, and celebrated with the community. And she was excitedly preparing with three other Texas athletes who are friends and were going, too.

“Stacy was devastated,” her mother said. “I had never seen her so down, even when she was in the wheelchair. And this happened to many other athletes nationwide.”

She was also concerned because Stacy is getting older and has to work even harder to stay strong enough to compete. Martha says she has read about other Special Olympians with similar scenarios; like Stacey, they might never be able to compete at nationals again.

For six months, Stacey says, she was “so so sad” and couldn’t believe she wasn’t going. Even her riding instructors commented on her deflated demeanor. Jerry kept saying God had a reason for all this.

And then, at the ninth hour, or in this case, two days before opening ceremonies, the ISO made an about-face. It responded to Florida’s threat of a $27 million fine if the organization imposed the requirement, so it withdrew its vaccine mandate. Florida Gov. Ron DeSantis said the ISO mandate violated a ban on vaccine passports signed last year.

Stacey was ecstatic. Texas Special Olympics rebooked her flight, and she headed to Orlando the next morning. But Martha says she’s aware that for many competitors it was too late and too overwhelming to drop everything to get to the Games in a day. She is frustrated it took a $27 million threat for the ISO to listen, and then not until the last minute.

And yet, for Stacey, there’s a happy ending. On June 8, her 43rd birthday, she took the gold medal at nationals in equitation, the art and practice of horsemanship and riding.

“Stacy just keeps going and always tries to stay positive,” her mother says. “She is a miracle. And I do think she still has to finish some of God’s work down here.”