“Our voices can no longer be denied”

TRENDING | New films highlight the dangers of the transgender trend

Grace Lidinsky-Smith, 28, says a lifelong preoccupation and ­discomfort with her body and an idealization of the male experience led her to start injecting testos­terone at age 22 and undergo a double mastectomy shortly after.

Lidinsky-Smith’s story of embracing and then rejecting the transgender lifestyle is featured in a new 40-minute documentary, Detransition Diaries, produced by the Center for Bioethics and Culture Network (CBC).

Detransition Diaries is one of a handful of documentaries coming out that seek to pull back the curtain on the transgender movement and force the public to reckon with the data, images, and testimonials of those whose lives have been upended by gender ideology.

I attended a screening of Detransition Diaries on a recent Monday night at a small theater and alehouse 45 miles east of San Francisco. Outside the theater, Cat Cattinson, 31, a detransitioner featured in the documentary and the forthcoming Affirmation Generation, said she believes “public opinion is shifting.” She says she’s encouraged by the amount of interest in this film and others like it: “It’s coming from people from all walks of life and political parties.”

The film, available now for rent on Vimeo, follows another documentary CBC produced last year. Trans Mission critiqued the “gender affirmation” approach and the rush to persuade children with gender ­dysphoria or discomfort with their bodies into medical and surgical interventions with irreversible consequences.

“We realized how powerful the detransition stories were and how much audiences resonated with them,” said Jennifer Lahl, CBC president and co-director of both films. “We also saw how much backlash [detransitioners] receive in the mainstream media. … That’s when we knew we had to tell their stories.”

In September, Fox News host Tucker Carlson released a two-part series, Transgressive (warning: it contains graphic images and nudity), that includes interviews with detransitioners, parents, journalists, and medical professionals. The series frames the transgender movement as a cult, with children indoctrinated by teachers, doctors, activists, counselors, online communities, and in some cases, their own parents.

Two other films are scheduled to release in the coming months: Dysconnected from Don Johnson Media and Affirmation Generation by Vera Lindner, a filmmaker whose teenage daughter previously said she was transgender.

Films critiquing the transgender movement seem to be finding an audience. In June, conservative news site The Daily Wire released a provocative 90-minute documentary titled What Is a Woman? In the film, commentator Matt Walsh sets off on a quest to answer the title question. The Daily Wire has not publicized how many people have watched the film, but more than 5,000 people have reviewed it on Rotten Tomatoes. “Your film did a good job exposing the incoherence of gender identity theory and some of the harms it’s done,” author J.K. Rowling, who has nearly 14 million Twitter ­followers, said in a tweet to Walsh. 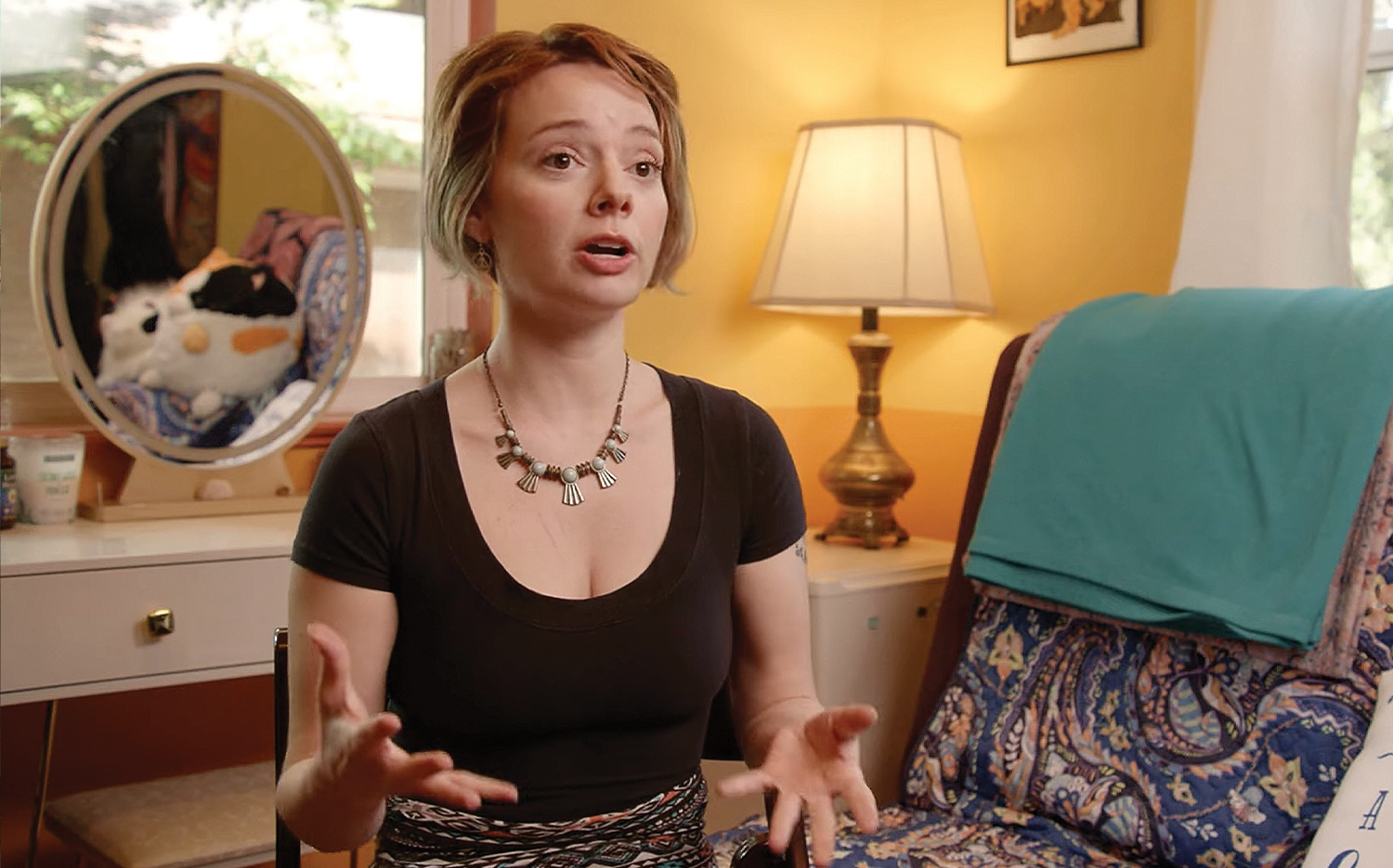 Cat Cattinson shares her story in Detransition Diaries. The Center for Bioethics and Culture

Detransition Diaries focuses on three young women—Lidinsky-Smith, Cattinson, and Helena Kerschner (see “Web of deception,” May 7, 2022). Each had no prior history of gender dysphoria, but they say they struggled with eating disorders and mental health and body image issues before they were sucked into transgenderism. Soft piano music plays as each woman describes an initial, euphoric high when starting testosterone injections. Then each tells of the physical, mental, and emotional toll of the drugs and the ostracism they experienced as they felt doubt and regret.

Inside the theater, I sat next to Joey Brite, who introduced herself as a feminist and a “butch lesbian.” She’s also the executive producer of Affirmation Generation. I also sat by Erin Friday, a mother whose 11-year-old daughter seemingly out of nowhere began identifying as transgender. Friday has become involved in advocacy against gender ideology, and she started a ­parent support group in the Bay area. Friday’s daughter has since stopped calling herself transgender.

Detransition Diaries occasionally veered from the women’s stories to show the wider pushback against ­gender ideology. The film included clips of some female panelists speaking earlier this year at a CBC event in New York City called “How ‘Gender Equality’ Cheats Women and Girls.” Lahl and CBC executive director Kallie Fell recently signed a contract with a publishing company to turn Detransition Diaries into a book.

Near the end of the film, Lidinsky-Smith said that more than anything else, she regrets that she may not be able to have children due to the cross-sex hormones: “That’s something I began to really want in my mid-20s.” As word spreads about her and other detransitioners’ experiences, she says, “I am hopeful, but I think it’s going to be a really ugly time.”

“The fallout is going to be really severe from all the detransitioners, so I’m a little worried about that,” Lidinsky-Smith said. “But our voices can no longer be denied, so that’s good.”