‘Now we are paying the price’

On Tuesday, a Hong Kong court found nine democracy activists guilty of public nuisance for their roles in the 2014 Umbrella Movement protests, a ruling that deals a blow to civil society in the former British colony. Supporters of the activists showed up to West Kowloon Court this week carrying bright yellow umbrellas, a symbol of the 79-day protest that had called for universal suffrage in Hong Kong.

In his 268-page ruling, Judge Johnny Chan Jong-herng claimed that by blocking major roads in the city, “the unreasonableness of the obstruction was such that the significant and protected right to demonstrate should be displaced.” Many believe the charges have been politicized as the prosecution tried the group under Hong Kong’s common law system, which allows a maximum penalty of seven years in prison, compared with the maximum of three months under statutory law.

“Today’s guilty verdicts are a crushing blow for freedom of expression and peaceful protest in Hong Kong,” Man-kei Tam, director of Amnesty International Hong Kong, said in a statement. “The government has used vague charges in their relentless persecution of the Umbrella Nine. The government is increasingly using prosecutions as a political tool to target peaceful activists.”

Tai, Chan Kin-man, and Chu, known as the “Occupy Trio,” created the Occupy Central group in 2013 to push for universal suffrage in the 2017 election of the chief executive, the top leader of Hong Kong. Occupy Central held an unofficial referendum in June 2014 that saw 792,000 voters turn up to vote on reform proposals. The government, though, ignored the people’s will: In August 2014, Beijing announced that Hong Kong residents had to choose from among two or three pro-Beijing candidates for chief executive. A few weeks later, tens of thousands of Hong Kong residents flooded the streets to protest the law. 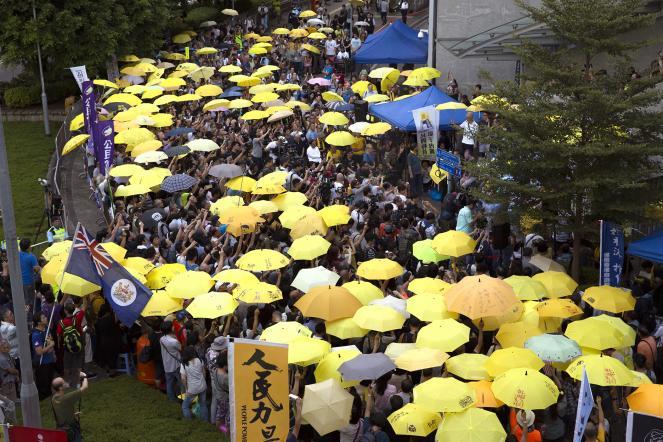 Protest organizers initially promoted nonviolent resistance and dialogue, but student groups with differing approaches soon gained control of what became the Umbrella Movement. The Occupy Trio stepped back, returned to their jobs, and even turned themselves in to the police station near the end of 2014 in an attempt to persuade others to clear the streets.

Since then, the Chinese government has continued to encroach on Hong Kong, which historically has been allowed to operate with a degree of autonomy from Beijing. In 2017, a 1,194-member election committee elected pro-China Carrie Lam as chief executive. Protest leaders who had been elected into the legislature were disqualified for criticizing China while taking their oath of office. Hong Kong also banned a small political group headed by activist Andy Chan because it supported Hong Kong independence. Hong Kong also denied British journalist Victor Mallet a work visa after he moderated a talk with Andy Chan.

The government has also proposed a law that would criminalize people who parody the national anthem. Earlier this month, the government proposed changes to the extradition law that would make it easier to hand fugitives in Hong Kong over to mainland China. This could include dissidents, democracy activists, or anyone else China claims has broken the country’s law.

“Since the 2014 Umbrella Movement, the Communist Chinese Government has increased its interference in Hong Kong’s affairs and the Hong Kong government has been complicit in actively suppressing political participation and speech,” said U.S. Rep. James McGovern and U.S. Sen. Marco Rubio of the Congressional-Executive Commission on China. “The charges and verdicts against the ‘Umbrella Nine’ effectively punish peaceful political dissent and narrow the space for free expression and peaceful assembly.”

In March, I visited 75-year-old Chu at Wanchai Baptist Church, where he described his journey from starting as a homeless orphan to finding Jesus to becoming a pastor concerned about injustices in his church, his community, and Hong Kong. (Watch for a future article about Chu in WORLD.)

He noted that initially he wanted Occupy Central to be pure, simple, and holy—no conflicting interests, singularly focused on the 2017 elections, and focused on sacrifice and suffering. “Under the cross, those who participate in the movement need to pay the price,” he said with a weary smile. “And now we are paying the price.”

Time for Hong Kong to declare their independence from China! What good has China done for Hong Kong? Nothing! They have not honored any of the supposed liberties that China promised them. Anyone who aposes them, they jail and send off to the gulags!

God bless and strengthen our brothers and sisters in Hong Kong and China.