Medicaid is bloated and ripe for reform, but the disabled who rely on the program worry cuts could target them

It was a hot day last summer, and the parade was slow to start. Ten minutes, 15 minutes, an hour passed before it crawled to a move. But the thousands of New Yorkers who showed up for the third annual Disability Pride Parade patiently milled around in wheelchairs or using walkers or the white cane of the blind. The crowd, significantly bigger than the first two years, brimmed with the deaf, the autistic, those with cerebral palsy—New Yorkers from many different races and backgrounds. Children with Down syndrome carried homemade signs.

Some New Yorkers in sunglasses toting Starbucks drinks wove through the boisterous masses, clearly annoyed that the parade was slowing their trip from Point A to Point B. Even if spectators along the route up Broadway were minimal, the parade was buoyant, with music blasting and an appearance from young actor Micah Fowler, who has cerebral palsy, of ABC’s Speechless. Jazz musician Mike LeDonne, whose daughter has a rare syndrome that puts her in a wheelchair, founded the New York parade in 2015, and some of his musician friends showed up to blast trombones and trumpets along the route.

“A crowd like this, it feels like home,” said Gabriel Antoine, looking around from his wheelchair. A bullet passing through his spinal cord put him in the chair 12 years ago, but he has stayed as active as he can. A friend whom Antoine met in a workout class for the wheelchair-bound rolled up, and they shared a handshake.

Antoine took a two-hour bus ride from Brooklyn to be at the parade because he was concerned over cuts to Medicaid, which he relies on. Every person with a disability whom I interviewed at the parade used Medicaid and was anxious about potential cuts. Medicaid is the government-funded insurance program for low-income children, adults, and the disabled. Few in the public think of those with disabilities as receiving Medicaid, but it covers a third of nonelderly adults with disabilities, according to the Kaiser Family Foundation, and half of them are above the poverty level.

The case for some kind of reform of Medicaid is strong. The program has grown massively in recent years to the point that it is one of the big contributors to the federal debt, and it has done so by covering more and more able-bodied adults. Among the problems:

• Medicaid spending grew 9.7 percent to $545.1 billion in 2015, which was faster growth than for both Medicare or private health spending, according to the Center for Medicare and Medicaid Services (CMS).

• Medicaid.gov reports that in 2013, 56.8 million Americans were enrolled in Medicaid or the Children’s Health Insurance Program (CHIP). In just four years that number has grown to 74.3 million.

• Medicaid is eating up state budgets. In 1987, states spent about 10 percent of their budgets on Medicaid. By 2015, it was 28 percent, according to the National Association of State Budget Officers.

• That growth has reached the point that in 24 states, Medicaid now finances more than half of all live births, with New Mexico leading the way at 72 percent of live births, according to the Henry K. Kaiser Foundation.

Seema Verma, administrator for the Centers for Medicare and Medicaid Services, told the Wall Street Journal that “one of the major, fundamental, flaws of the Affordable Care Act” was “putting able-bodied adults into a program that was designed for disabled people.” The addition of so many able-bodied adults “stretched the safety net,” she said, “and it jeopardizes care for the individuals that the program was originally intended for.”

Trying to tackle Medicad’s many problems, Republicans in their proposals to repeal and replace Obamacare have included slowing Medicaid’s growth and changing the structure of Medicaid to state block grants or a per-person allotment. The restricted growth in federal spending is not technically a cut, but healthcare experts say it could result in states cutting spending in areas where they have discretion. One of those is expensive services that the disabled tend to use, like in-home care, which is difficult to find coverage for anywhere else. 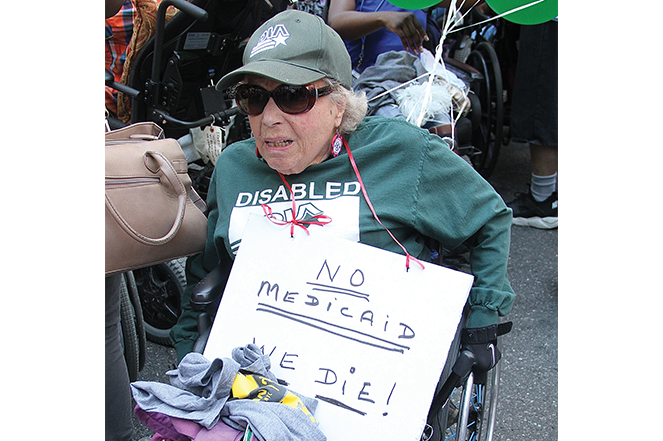 “DISABLED PEOPLE ARE KIND OF INVISIBLE,” said Daniel Florio, a lawyer who is quadriplegic from spinal muscular atrophy, as he watched the New York parade go by with several friends. His condition requires 24-hour care at his home, partly funded through Medicaid, and he lives with his parents in New Jersey. He relies on a respirator at night, which requires monitoring.

Without Medicaid and his parents, Florio said, he would be institutionalized. His parents cover the hours for free that Medicaid doesn’t cover, though they are now 68 and 71, which raises question marks in Florio’s mind about the future.

“I’m always going to require at least as much help as I have now,” he said.

Private insurance typically will not cover long-term home care for the disabled. It’s possible to purchase separate long-term home care insurance, but those policies don’t cover those with pre-existing conditions (even under Obamacare). Florio had to spend over an hour explaining his complex insurance arrangements to me. Insurance through one of his previous employers covered home health assistance, but Florio didn’t qualify for it because he had a pre-existing condition.

Florio, who has degrees from Berkeley School of Law and Harvard University, worked as a lawyer for years as his health and insurance coverage has permitted. He’s not working now, due to a delicate web of circumstances: He has to stay with his parents for care, but in New Jersey it has been hard to find accessible work. And if he earns too much, he loses some of his government coverage without having sufficient income to make up for it.

At one job, he had to use a para-transit service to go to work that took two hours each way, making each of his workdays an exhausting 10 or 12 hours. And getting up, getting dressed, going to the bathroom, bathing, and eating with the help of an attendant can take hours.

To cover his healthcare now, he relies on Medicare as his primary insurance, and then Medicaid waivers (which cover his in-home assistance services), and free assistance from his parents and friends. Based on doctors I interviewed, this is a very common arrangement for those who have had disabilities from a young age.

“The waiver services … are available if [states] have extra money lying around, essentially,” Florio said. 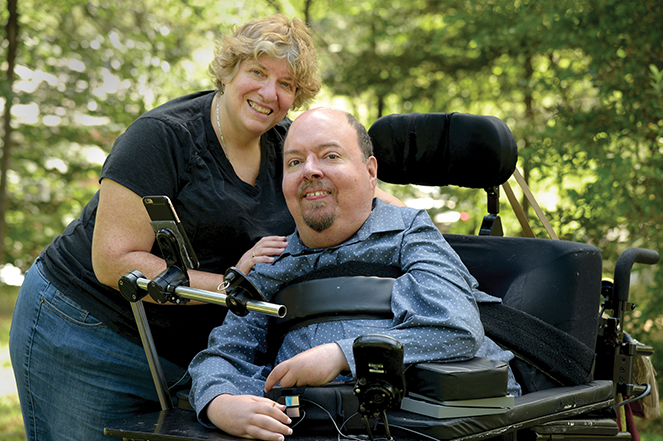 AT BEACON CHRISTIAN COMMUNITY HEALTH CENTER on Staten Island, most of the clinic’s patients use Medicaid and Medicare. The Mariners Harbor neighborhood surrounding the clinic, a federally designated “medically underserved area,” is mostly black and Hispanic, with slices of white and Asian populations. The staff sees patients from firefighters and cops to the homeless. Dr. Janet Kim, the chief medical officer who started the clinic with her husband after prompting from a church friend, said their patients with developmental or physical disabilities are almost all on Medicaid.

One police officer brought his disabled daughter to the clinic—the officer had private insurance, but because of the high cost of his daughter’s care, he had to apply for Medicaid. Coverage depends on the disability—one man at the clinic became a paraplegic after an accident and never qualified for Medicaid. Kim also emphasized acute problems with Obamacare that she sees every day in her work: rising premiums and problems with health exchanges. But she says any reform that would cut Medicaid for patients with disabilities would put them “in a very precarious position.”

While New York accepted the Medicaid expansion as part of Obamacare, it has shrunk its Medicaid spending since 2011 as part of an effort to cut costs. The state is second only to California in Medicaid expenditure, but since the cost-cutting program, its per-person spending is lower than it has been in almost 20 years. Broadly speaking, the cuts involve capping certain automatic growths in spending.

For the Beacon clinic, the cost tightening means “more authorizations and approvals,” said Kim. Though the clinic takes Medicaid, finances aren’t easy, and Kim says the clinic scrapes for donations and grants. The staff has devotionals every morning to stay grounded. When other groups ask how to replicate what the Kims have done, Kim tells them to “pray a lot. And pray more.” 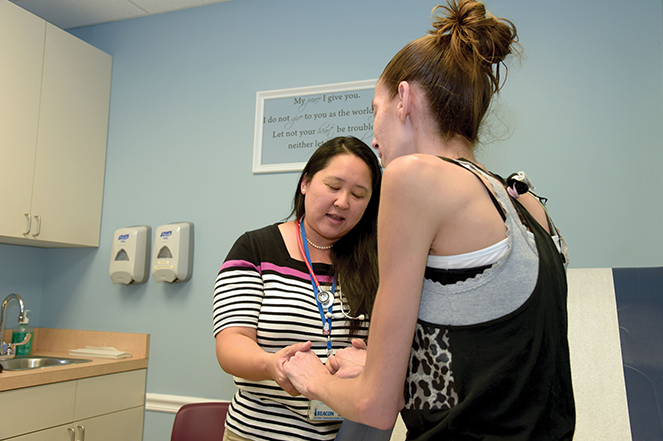 Dr. Janet Kim prays with one of her patients. Danielle Richards/Genesis Photos

DR. BRIAN SKOTKO also has to scrape for donations to supplement Medicaid reimbursements—he heads up the Down syndrome program at Massachusetts General Hospital, one of just 58 clinics in the country specializing in Down syndrome for adults and children.

Those kinds of complexities in the insurance market are always changing, so the clinic regularly has to talk to Medicaid staffers to stay current.

Down syndrome care is important to Skotko because his sister has it. She is the reason he went to medical school, and she has relied on their parents and Medicaid for help. Right now she has sufficient services; but as those with Down syndrome age, more health complications can set in. Skotko said he is there to take care of her if his parents become unable to do so, but he’s concerned about how caps might limit her coverage.

“Many people are holding their breath,” he said.

Medical costs vary widely based on the disability. For Down syndrome children, costs are high without insurance, according to research that Skotko and several colleagues recently published. But with insurance, out-of-pocket healthcare costs for a Down syndrome child are only slightly more than a typical child, about $1,000 a year. Skotko hoped the data would help reassure parents receiving a prenatal Down syndrome diagnosis.

OUT ON BROADWAY, Daniel Florio moved from the sidelines to join the parade. A very social person, Florio enjoys going to the city to meet friends from Harvard for lunch, and he has traveled to four continents. He says when he’s not as active, he gets depressed, thinking about what he could be doing instead of being unemployed at his parents’ house.

Down the road, “Despacito” played on a boombox, and a city bus driver honked in celebration as he drove past the marching crowd. A fire truck joined the honking. The disabled paraders let out whoops. One little girl had sticks of chalk secured to the bottom of her wheelchair and a bubble machine by her arm, so even though she couldn’t move, she left a stream of bubbles and a rainbow of colors on the streets and sidewalks where she passed.