Not even mostly dead

Three optimistic views of the Christian future, and a dose of pessimism for America

Despite all the dire forecasts about millennial religious views, Tim Clydesdale and Kathleen Garces-Foley’s The Twenty­something Soul (Oxford, 2019) offers optimism. Christians overwhelmingly want to have children, and “over 70% of Nominal Evangelical twentysomethings and over 80% of Active Evangelicals plan to join churches when they have children.” The authors’ forecast: “We expect this branch of American Christianity will maintain its 30% share of the young adult population.” But will those parents emphasize believing as well as belonging? Christian Smith and other authors of Religious Parenting: Transmitting Faith and Values in Contemporary America (Prince­ton, 2020) say “parents tend to undersell religion to their children” out of fear that teenagers will revolt: “Older children as ever-potential rebels end up holding the greatest negotiating power when it comes to doing religion.”

Cal Thomas is pessimistic in America’s Expiration Date (Zondervan, 2020). He sees education as part of the problem and tells parents, “Remove your children from government schools and either homeschool them or send them to good Christian schools. Do not send them to universities that have largely become propaganda centers for secular progressives.” Linking religious and political decline, he asks, “What makes those promoting supposedly righteous America think we can escape judgment? ... America is headed for foreclosure. We are drowning in financial debt and submerged under an immoral tsunami.”

Gene Edward Veith in Post-Christian (Crossway, 2020) says a global religious explosion means the postmodern world is becoming post-secular. Some say a post-Christian trend signals reversion to a pre-Christian, pagan worldview, but Veith is not sold about that notion, particularly after traveling in Scandinavia. Now that African Christians have disappointed liberal U.S. and British prelates by preferring God’s Word to Karl Marx’s, young Christians in northern Europe are doing the same.

I thought Angela Denker’s Red State Christians (Fortress, 2019) would be another journalistic foray into America’s heart of darkness. Her dislike for the Christian Right is clear: “Jesus’s message of love and sacrifice has been perverted to lift up power and hatred.” Still, she does try to show “the humanity and diversity” of those with whom she disagrees, and admits her surprise that the annual March for Life in Washington is not “a thinly veiled Trump rally” with “chants of ‘Build the wall’ and ‘Lock her up.’” 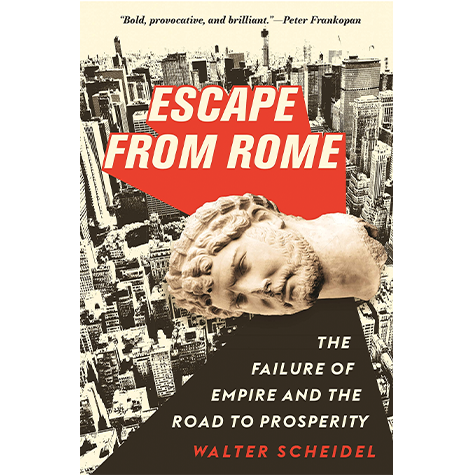 Historians since Edward Gibbon in the 18th century have tended to call “the decline and fall of the Roman empire the greatest, perhaps, most awful scene, in the history of mankind.” But Walter Scheidel in Escape From Rome (Princeton, 2019) sees that imperial collapse as positive, since it “ushered in an age of open-ended experimentation” and enabled Europeans eventually “to build societies that enjoy freedom, prosperity, and general welfare.”

Scheidel shows decentralization was helpful. China in the 1400s sent fleets to Africa, yet when emperors lost interest, expeditions ceased. By contrast, when half a dozen power centers turned down Christopher Columbus, Spain could eventually say yes. Now, China’s president aggressively centralizes power, as Elizabeth Economy shows in The Third Revolution: Xi Jinping and the New Chinese State (Oxford, 2019). That didn’t work out well for previous dictators and the people they said they served.

If you’ve been curious about the battles between the two major Islamic clans, your ship is coming in on Feb. 4: Laurence Louër’s Sunnis and Shi’a (Princeton) explains that today’s dispute is not really about political events that purportedly occurred almost 1,400 years ago. It’s about what kinds of leaders Muslims should have and who should choose them, and what practices are legit: Shiites allow temporary marriages and lying (taqiyya).

Gay Talese’s High Notes: Selected Writings (Bloomsbury, 2017) shows how a journalistic stylist wrote masterful profiles—as in “Frank Sinatra Has a Cold”—based not on quoting words by the subject but describing actions and reactions.