It has become a cliché to refer to Quentin Tarantino’s Once Upon a Time in Hollywood as a “love letter”—to Tinseltown, to Tarantino’s youth, to 1969 itself (just in time for the year’s 50th anniversary!). But even with its smattering of gratuitous violence, the film is better described as a fairy tale (hence its title’s first four words).

What is a love letter is the film’s meticulously textured Columbia Records soundtrack. And what it’s a love letter to is the era in which the thrilling combustibility of genre-free 1960s pop was accessible to anyone within earshot of AM radio.

The soundtrack’s tone, however, is set by Paul Revere & the Raiders, who are represented by “Hungry” and “Good Thing” (both Top 10 hits) and “Mr. Sun, Mr. Moon” (which only made the Top 20 but enjoyed a kind of parallel-universe popularity when rewritten as the Swingy-Doll theme).

More importantly where both Tarantino’s film and the year 1969 are concerned, both “Hungry” and “Good Thing” were produced by Terry Melcher, the son of Doris Day and, along with the Beach Boys’ Dennis Wilson, an acquaintance of an LSD-dropping hippy ex-con and aspiring singer-songwriter named Charles Manson.

It was Melcher’s former house on Cielo Drive in which four of Manson’s followers murdered Sharon Tate, Jay Sebring, Wojciech Frykowski, and Abigail Folger on Aug. 8 and 9, 1969, allegedly as payback for Melcher’s refusal to land Manson a recording deal.

Melcher died in 2004, having unwaveringly maintained that his dealings with Manson were strictly business. It’s a claim of which some observers have been skeptical (for reasons made clear in the new book by the investigative journalist Tom O’Neill, Chaos: Charles Manson, the CIA, and the Secret History of the Sixties).

Whatever the truth, Melcher has long symbolized the good-vibrations-vs.-hearts-of-darkness dualism at the core of the ’60s pop-music scene. And his association with music featured in Once Upon a Time in Hollywood, tenuous though that association may be, casts a pall over the soundtrack’s otherwise almost too heartwarmingly nostalgic glow. 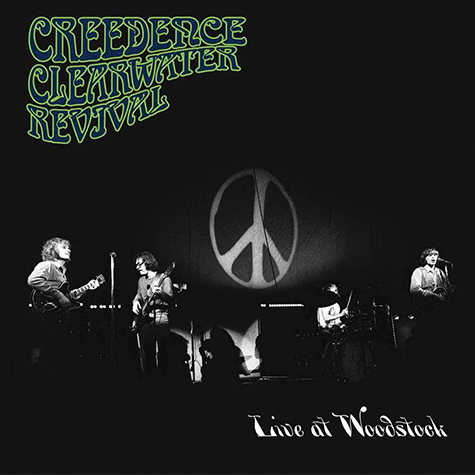 EXACTLY ONE WEEK after the Tate murders, Creedence Clearwater Revival took the stage at Woodstock and turned in a performance that by all reliable accounts was one of the tightest and hardest hitting of the entire festival.

The set kicks off with “Born on the Bayou” and, in keeping with the title of the penultimate number, keeps on chooglin’ for almost an hour, gradually winning over a crowd that, in his autobiography, John Fogerty describes as having just been “put to sleep” by the Grateful Dead.

The group’s secret? Playing sober, a footnote that may be the biggest wake-up call of all.