John Lee, 64, won the one-man Hong Kong chief executive’s “race” on May 8, having secured 1,416 votes from the 1,461 members of a pro-Beijing election committee. The rest of Hong Kong’s 7.4 million citizens had no say in that election. Many also see that as Beijing continuing to renege on its promise of universal suffrage for the former British colony, which is enshrined in Hong Kong’s mini constitution, the Basic Law. Lee will begin his term on July 1, the 25th anniversary of Hong Kong’s handover from Britain to China.

Rather than an election, critics view Lee’s win as Beijing’s thinly veiled appointment. China imposed an electoral overhaul last year to ensure only “patriots” could hold office in Hong Kong. Lee himself, as Hong Kong’s then-security chief, supervised that revamp and vetted the election committee members who would be voting in the May 8 election.

Lee, who served in Hong Kong’s police force for most of his career, is known for his hard-line tactics in clamping down on the 2019 pro-democracy movement. The monthslong demonstrations began with peaceful rallies that drew up to 2 million participants, but as authorities refused to respond to citizens’ demands, the protests turned violent: Demonstrators vandalized property and launched Molotov cocktails, while riot police fired tear gas, shot rubber bullets, and deployed water cannons. As Hong Kong’s then-security chief, Lee led the crackdown that many criticized as excessive state violence.

Beijing’s “appointment” of Lee shows its unyielding rule by law in Hong Kong, said Nathan Law. This former Hong Kong pro-democracy legislator is now exiled in the United Kingdom. Lee departs from his four pro-Beijing predecessors, as they were from the business sector or were administrators who rose through government ranks.

U.S. State Secretary Antony Blinken released a joint statement with other foreign ministers of Canada, France, Germany, Italy, Japan, and the United Kingdom, together with the European Union’s high representative to “underscore our grave concern over the selection process” for Hong Kong’s chief executive. It is “part of a continued assault on political pluralism and fundamental freedoms,” said the G7 and EU officials. They call on China to uphold its international and legal commitments. They also urge the new chief executive to respect Hong Kong’s protected rights and freedoms.

Meanwhile, the Hong Kong government “strongly refutes” the international outcry against the election. The poll was conducted in “an open, fair and honest manner,” according to its statement. Moreover, it was consistent with “democracy ‘with Hong Kong characteristics.’” 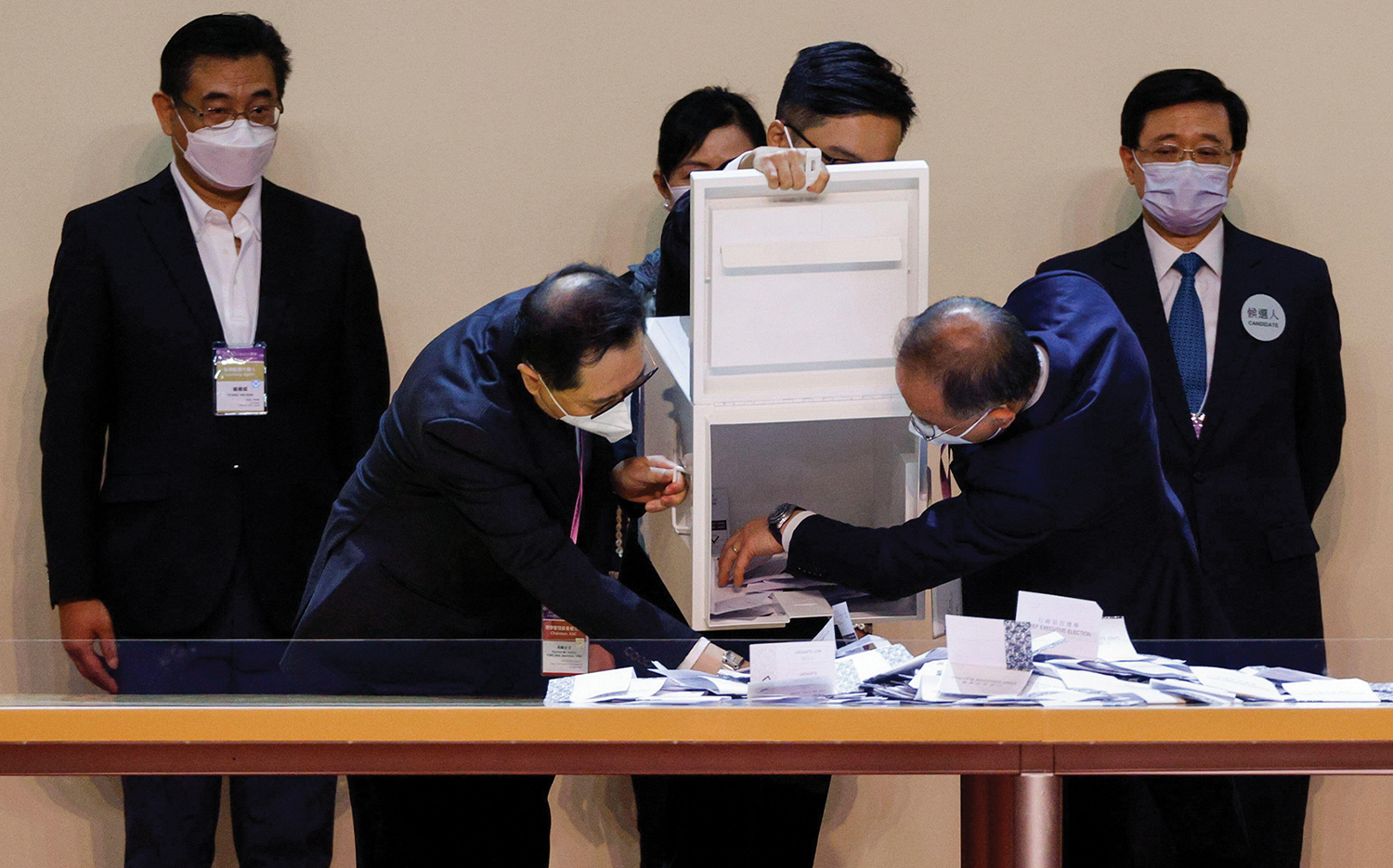 ON ELECTION DAY, thousands of Hong Kong police officers patrolled the city to prevent any social unrest. Despite a draconian national security law that criminalizes dissent, three pro-democracy activists from the League of Social Democrats (LSD) held up a banner that read “Human rights above the regime; the people greater than the country.” The trio chanted, “Power to the people, universal suffrage now,” as they walked toward the Hong Kong Convention and Exhibition Center, the polling station in Wan Chai. They kept to the social-distancing restriction that limits groups to four and were surrounded by police officers during their demonstration.

While previous chief executive elections had more than one candidate, this time “Beijing didn’t even bother to put up a show and pretend that competition was possible for the territory’s top job,” said Anna Kwok, strategy and campaign director of Hong Kong Democracy Council (HKDC). Members of this Washington, D.C.-based organization include exiled Hong Kong pro-democracy activists.

The May 8 events contrasted starkly with the last chief executive election five years ago. In 2017, there were opposition members in Hong Kong’s government as well as the committee that voted for the city’s top leader. Crowds of citizens joined prominent pro-democracy activists, including Joshua Wong, to protest against the government and demanded universal suffrage without fear of arrest. But since Beijing imposed on Hong Kong the national security law—which carries a maximum penalty of life imprisonment—in June 2020, many activists, including Wong, are now behind bars. Others have fled the city or quit politics. Many pro-­democracy and civil society groups have disbanded.

Political repression continues. On May 11, Hong Kong’s national security police arrested four pro-democracy activists, including 90-year-old Cardinal Joseph Zen, for their involvement in a now-­defunct humanitarian fund that provided financial aid to citizens prosecuted over the 2019 protests. Zen is the retired Catholic bishop of Hong Kong. Accusing the four of foreign collusion, authorities have released them on bail.

When Lee takes office, even tighter control will come. He has vowed to legislate Hong Kong’s own security law in accordance with the Basic Law’s Article 23. While the Beijing-imposed national security law already punishes violators for subversion, secession, foreign collusion, and terrorism, the local law will also prohibit treason and sedition against the Chinese government. It will cover the theft of state secrets and the activities of foreign political entities in Hong Kong as well. In 2003, then-chief executive Tung Chee-hwa attempted to pass that local law but shelved it when 500,000 people took to the streets to protest against the legislation they considered a threat to Hong Kong’s freedoms.

“Hong Kongers’ freedoms of thought, speech and press will be further suppressed” with Lee as chief executive, wrote the LSD in a Facebook post. Without democracy and universal suffrage, “the law will be weaponized by those in power.” A government that lacks checks and balances and a society that stifles dissent are “definitely not good for Hong Kong’s development.”

Lee, along with the incumbent Chief Executive Carrie Lam, is among the 11 Hong Kong and Chinese officials that Washington sanctioned in 2020 over the national security law implementation that has vastly reduced Hong Kong’s freedoms. Google suspended Lee’s YouTube campaign channel in April to comply with the U.S. sanctions.

A self-described Catholic, Lee praised China’s human rights violations against Uyghurs and other Turkic Muslims in Xinjiang as counterterrorism measures. Beijing’s abuse of minority groups in China’s northwestern region is recognized as genocide by Western nations.

The next five years of Lee’s term “will be filled with challenges for those of us who love this city,” wrote the Hong Kong Council of the Church of Christ in China in its call to prayer. Asking God to give discernment to the Hong Kongers who “still live in trauma and need to adapt to the changes of a new era,” the council also prayed that God would “remember the Hong Kongers who have already emigrated to search for a new life.” The organization included the city’s rulers in its petition, asking the “wise Holy Spirit” to be with them. 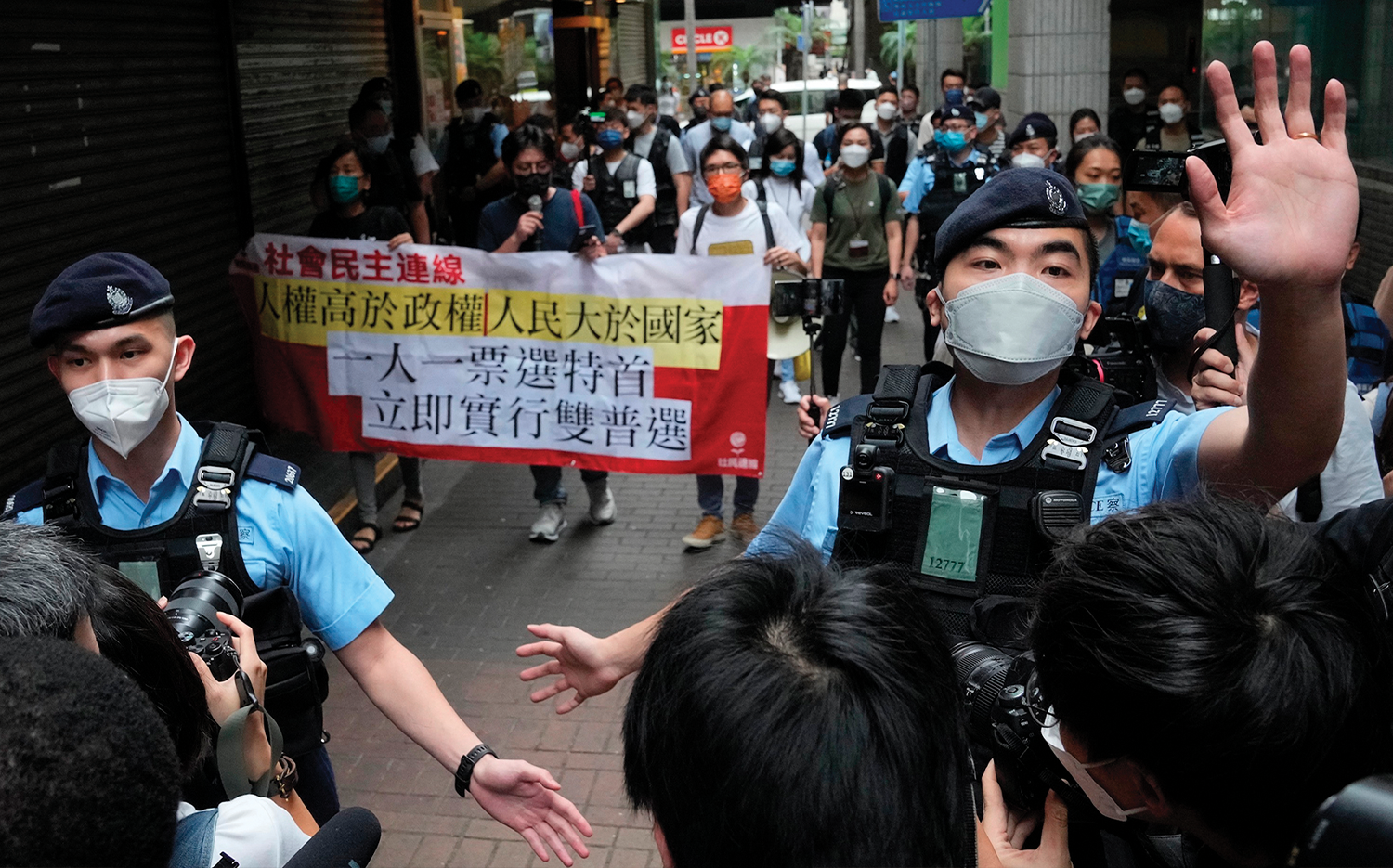 HONG KONG’S WORST COVID-19 wave, which peaked in early March, killed over 9,000 people and “contributed to a 4 percent drop in economic output for [this year’s] first quarter,” according to AFP. Politics—China’s encroaching authoritarianism—has also spurred the emigration of recent years. A net of 160,000 people departed Hong Kong in the first three months of this year, AFP reported.

Given Lee’s lack of business connections, Law thinks the new cabinet may not have the acumen to pull Hong Kong out of a troubled economy. The exiled former lawmaker also notes in his Facebook post that Lee’s inexperience in business is part of Beijing’s plan to remake that Hong Kong sector to ensure the Chinese government’s control and political stability. It can achieve that through Chinese capital and pro-Beijing tycoons that drive out local and international businesses.

Hong Kongers have long been striving for democracy. The 2014 protests of the Umbrella Movement called for universal suffrage, a demand that citizens reiterated more forcefully in the 2019 protests. During the 2019 movement, Washington banned the export of U.S.-made weapons to Hong Kong’s police force. Jeffrey Ngo, HKDC’s policy and research fellow, urges Washington to renew the expired prohibition.

That is “the easiest, most direct thing” American policymakers can do to slow Hong Kong’s growth into a “full-blown police state under Lee,” Ngo said.