“HELP!” JESSIE WOSIKA’S CALL RINGS OUT SHARP AND CLEAR. The sleek black Lab sitting next to Jessie’s motorized wheelchair springs to her feet and trots into the other room to find Jessie’s personal care assistant. Today, the command is just a practice run. But Athena, who sports a red vest that says, “Can Do Canines Assistance Dog,” responds as though it’s a real emergency. She’s attentive to everything her owner says or does.

“Help!” is just one of more than 150 commands Athena knows. Proudly, Jessie puts her companion through her paces: “Foot!”—Athena pushes Jessie’s foot back onto the wheelchair footrest after it’s fallen off. “Tug!”—She yanks a rope to open the refrigerator. “Get it! Nudge! Clean up!”

Three-year-old Athena has only been with Jessie for nine months, but she’s already indispensable in helping the 23-year-old better navigate life with spinal muscular atrophy, a form of muscular dystrophy. Service dogs, once limited to guiding the blind, now help people with a wide range of disabilities, including mobility problems, autism, seizures, diabetes, and hearing loss. Training the dogs takes years, and in Athena’s case, an unlikely network of volunteers.

Her lessons began in Stanley, Wis., in a place that knows all about discipline and control: the Stanley Correctional Institution. The prison, a grouping of low, stark-white buildings ringed by razor-wire-topped fences, sits at the end of a long drive through acres of green grass fields. The town’s water tower looms in the distance behind it. During a recent visit, I stood in the prison’s gym and watched a training session like the one Athena went through. Thirty-eight male inmates with 16 puppies, mostly 5-month-old black or yellow Labrador retrievers, listened closely to a trainer calling out directions. The inmates guided their dogs through commands, rewarding them with treats, head rubs, and praise: “Good job!” One prisoner told his dog “Back!” and it scooted backward, its hind paws actually climbing up the concrete block wall.

The prison-based program is run by Can Do Canines, of New Hope, Minn. Over the last 17 years, the organization has partnered with seven prisons in Minnesota and Wisconsin to train more than 800 service dogs like Athena. 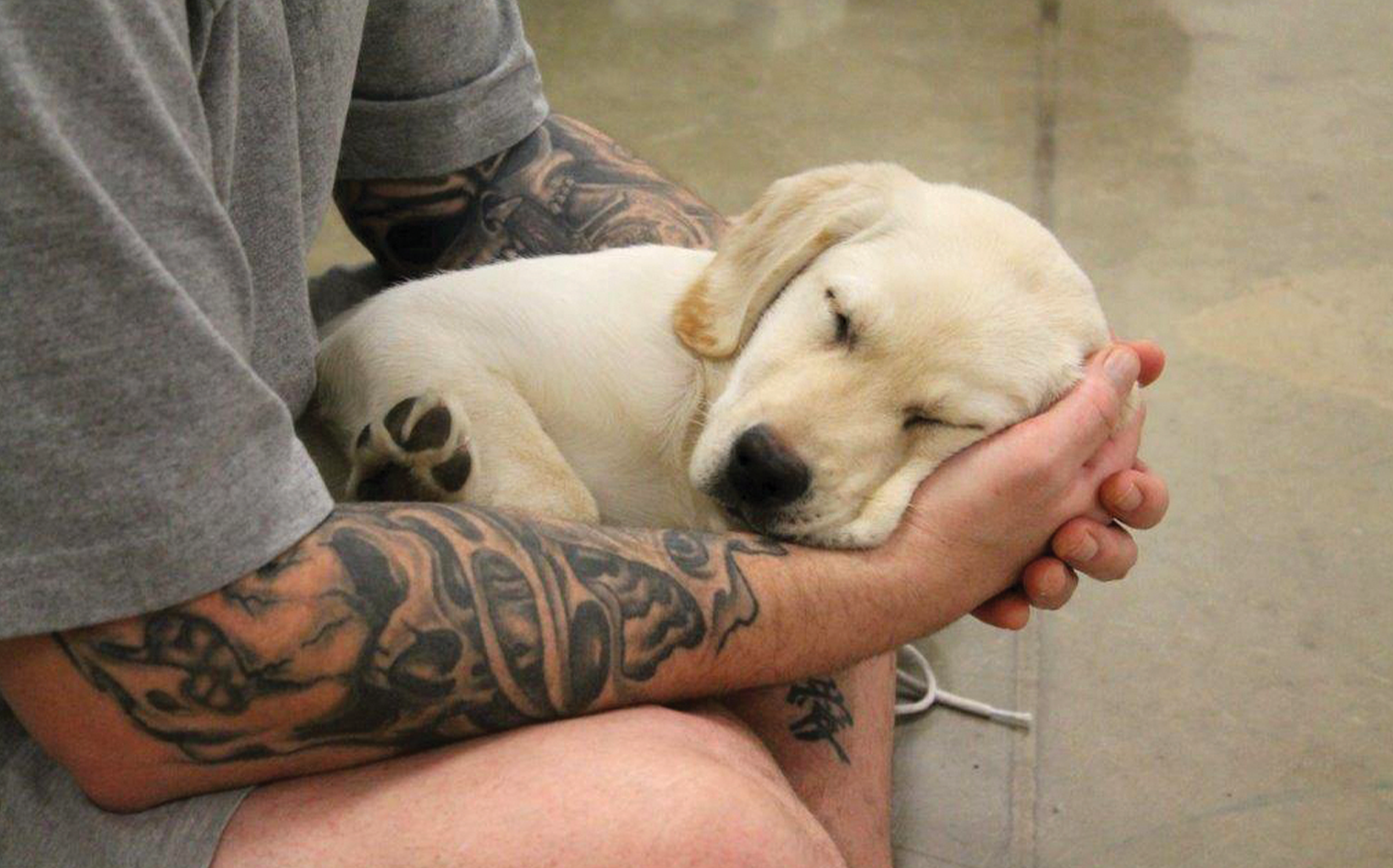 Patrick, an inmate who’s lived behind bars for 23 years, joined Can Do more than a year ago. “It gives me meaning and purpose … doing something good in this world,” he said.

Each dog lives with two inmates who agree to care for the animal 24/7. Tethered to their men by leashes, the dogs join them for meals, stroll through the common areas, or go outside to a fenced grassy patch for exercise and command practice. The inmates take care of everything—training, feeding, grooming, exercising, and cleaning up the inevitable messes. More than one man told me it was like having a child. And that’s not the only sacrifice the inmates make. They’re already squeezed into a cell about the size of a large bathroom, and the dog crate at the narrow bunk beds’ foot quickly shrinks maneuverable space.

But Patrick tells me the sacrifice comes with a big payoff: building character through action. “You’re not just reading a book … or sitting around in a group talking. … It requires you to … work, because if you don’t, it’s gonna show—you’re gonna have a dog that doesn’t know anything.”

Patrick tried for a year to join the program. Prison administrators wanted to make sure his behavior matched his good intentions. And he had to keep it up: Trainers who don’t maintain good behavior or take care of the pups get pulled from the program. 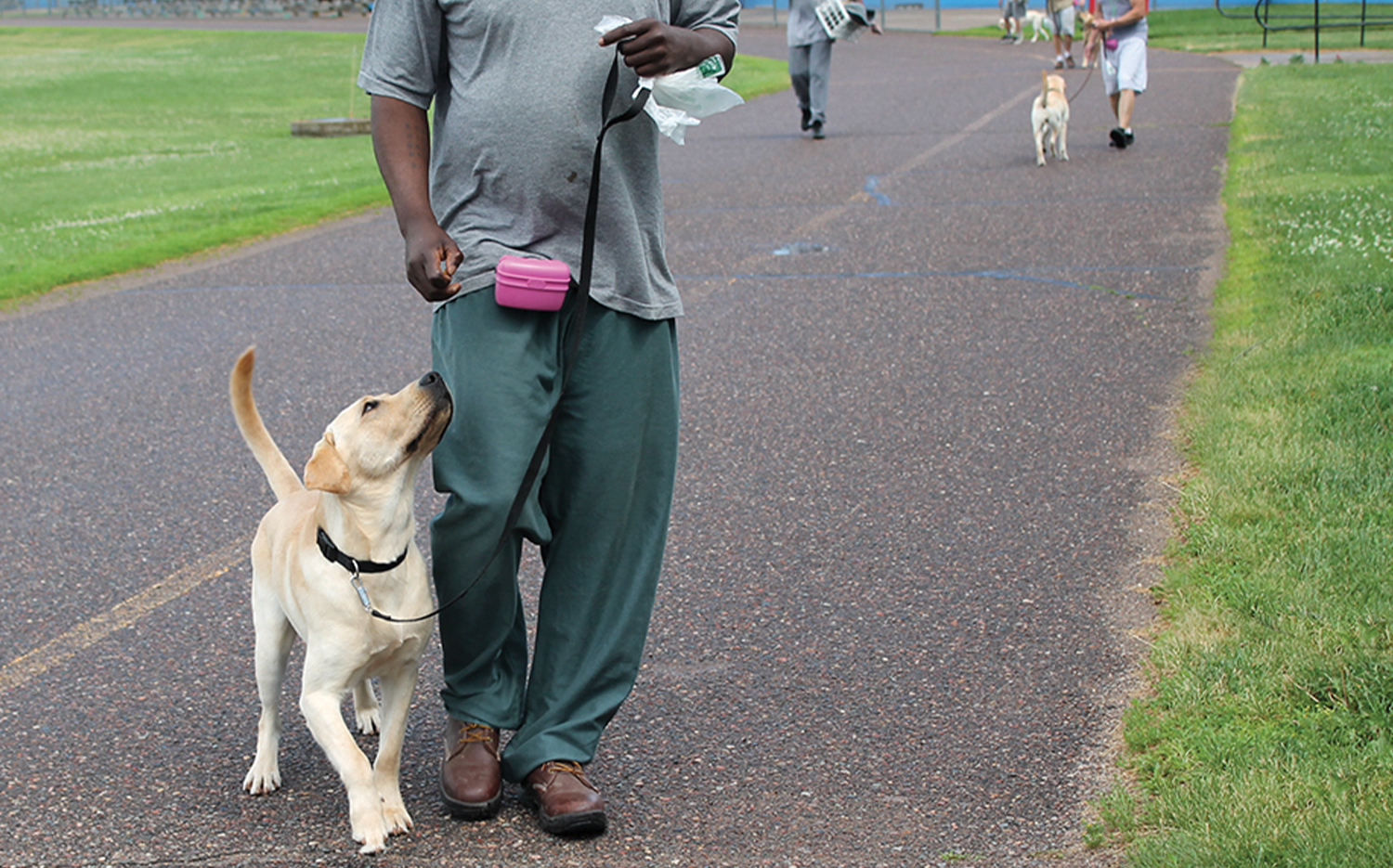 The dogs stay with their inmates for six to seven months. After that, they go into long-term foster homes, then to Can Do Canines kennels for final training before getting a permanent placement when they are nearly 3 years old. Jessie was surprised to learn Athena got most of her training from prisoners. But the inmates say they’re glad to break the ­stereotype. Helping people like Jessie gives them hope.

Patrick says training dogs to help someone else motivated him to want better things for his own life. Now family and friends are proud of him. He can earn seven college credits and a dog training certificate through participating in the program. And now he wants to pursue other meaningful work. Stanley inmates aren’t paid to train dogs, though some prisons give stipends. At least two inmates have gone into dog training businesses after their release.

Another inmate, Vernon, is working with a Lab named Braven. He says during his first two decades in prison, his attitude was “me against the world.” Six years ago, the prison allowed him to join PAWS—Prisoners Assisting With Service Dogs. He soon realized handling dogs helped him better understand himself and others. He’s learned to control his emotions and look for good in others, thanks in part to the dog training’s reliance on positive affirmation. He’s worked with 13 dogs so far. And although it’s always sad to see them graduate, he says it’s satisfying to know someone with disabilities will benefit.

“This allows me to be human in this sometimes inhumane situation,” he said.

Dyan Larson works for Can Do Canines as a dog instructor at three Wisconsin prisons. She was initially skeptical about the program, believing prisoners should pay for their crimes, not play with dogs. But now, she tears up talking about the work they do. She’s seen inmates change, ­becoming more compassionate and patient, better fathers and husbands, more respectable, more respectful. They see the dogs blossom under their care and attention, and that spills over to how they treat others. Success with the dogs seems to spark inmates’ desire for success in other areas of their lives.

Brandon Drost is a unit supervisor at Stanley. He says PAWS teaches inmates more responsibility than most have ever had, and he’s seen inmate cooperation improve, ­including between races that rarely interact inside the walls of a prison. And he says he hasn’t seen any inmate who participated in the program return to prison after being released.

There is similar anecdotal evidence that prison puppy programs reduce recidivism, but statistical evidence is sparse. Nearly 300 prisons throughout 50 states have similar programs, but not all prepare puppies for service—some train shelter dogs for pets.

During their time with the dogs, the inmates don’t know what kind of specialized assistance the animals will eventually provide. And they never get to meet the new owners. But when the first class of dogs she worked with ­graduated, Dyan Larson showed their inmate trainers a video of the ceremony. She watched with amazement as the group of hard-case, tattooed men sat in front of the screen, tears streaming down their faces.

Despite the program’s success, prison administrators aren’t always excited to roll out the welcome mat. Former warden Connie Roehrich invited Can Do Canines into its very first prison in 2005, in Faribault, Minn. Unless someone champions the program, she says, most prisons don’t want to take on the extra work involved. Lori Patrouille, the warden’s secretary at Stanley and integral to its dog program, agrees. Many prison administrators don’t relish the extra effort and necessary security checks, but she says the results are worth it—for inmates, the dogs, and the disabled. She calls it a “win, win, win.” 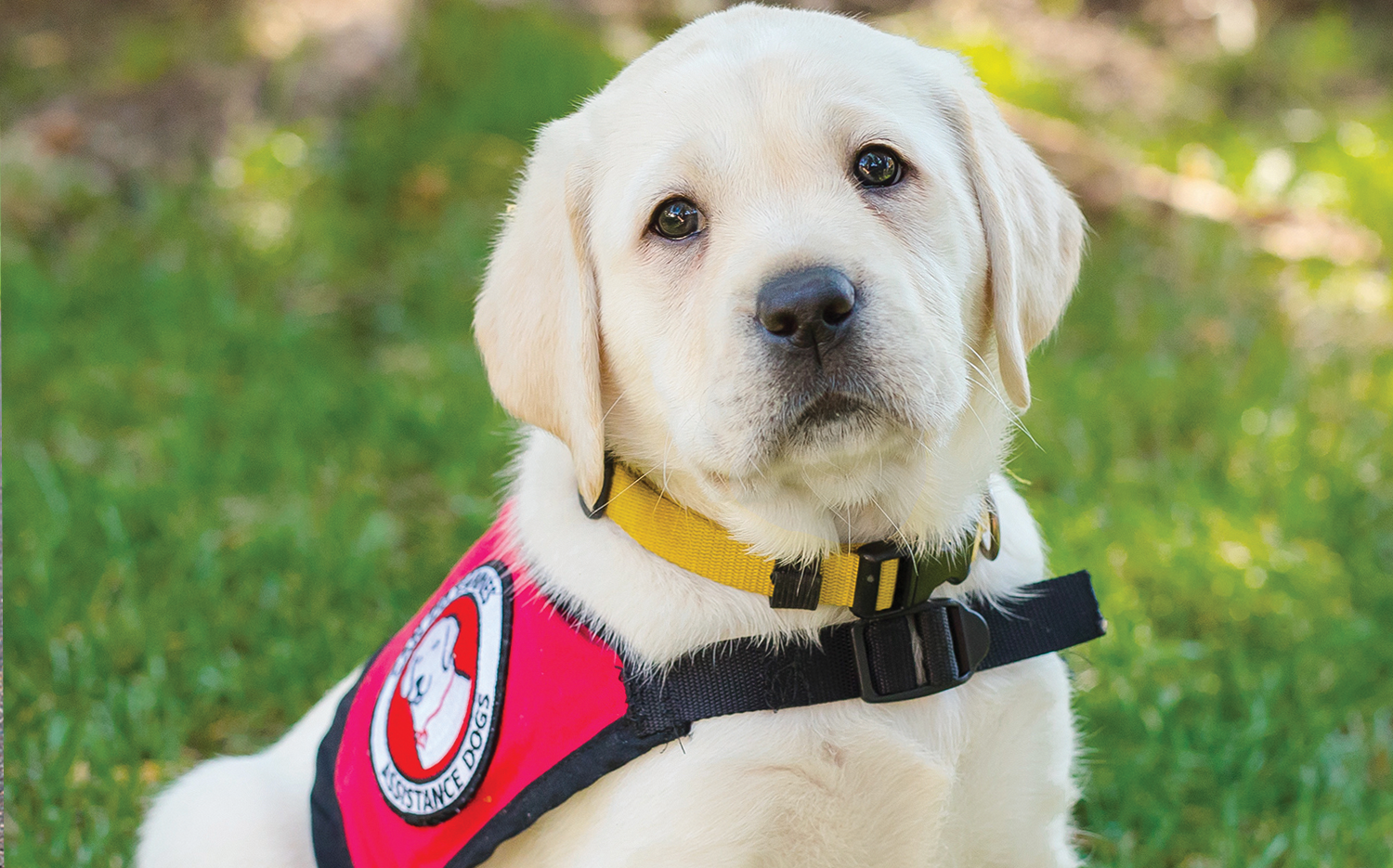 Trained service dogs are worth about $45,000 each. But their new owners don’t pay anything, thanks to donations and the inmates’ volunteer work. And that gift isn’t just about convenience.

Madison Stangl has Type 1 diabetes, and her dog, Willie, is trained to respond when her blood sugar falls. One day, it plummeted, diving so low she couldn’t rouse herself. Willie stopped her from lapsing into a fatal diabetic coma by ­pawing her and finally crawling on top of her until she stirred, then managed to get up and eat something full of sugar. When her dad arrived later, he took Willie’s face in his hands and told him, “You saved my daughter’s life.”

Jessie Wosika says Athena has given her independence she never had, especially as she heads off to college classes. She no longer feels helpless or afraid of being in public. Her parents have peace of mind, knowing Athena is keeping her safe, and Jessie’s personal assistant doesn’t feel she has to stay glued to her side.

“If I could meet the inmates who trained Athena, I’d tell them thank you for training her so well,” Jessie said. “She has forever changed my life.”