A mother eats lunch in her room at a 'zuo yuezi' care center in Shanghai. Aly Song/Reuters/Newscom

Sitting in her high chair at lunch, 1-year-old Christie was inconsolable. Though her dad brought her various foods and toys, the baby persistently fussed and cried, with tears sliding down her rotund cheeks.

“Sorry, she’s really tired,” apologized Christie’s mom, Agnes Kong, as she boiled dumplings and cajoled her elder daughter, Abigail, 3, to eat the food on her plate. In the family’s living room, the girls’ toys were strewn on the floor, yet the room seemed oddly empty: Besides the exhausting daily routine of keeping two small children washed, fed, and entertained, the Kongs are packing up their small apartment in preparation to move.

This is not how Agnes Kong spent her first four weeks after Abigail’s and Christie’s births. Instead, she followed an old Chinese custom meant to prepare women for the stresses of motherhood: She stayed in bed.

In a practice that might seem perplexing (or wonderful) to Western mothers, Kong and other women in Taiwan and China spend an entire month after childbirth mostly in bed, eating specific foods and following a series of traditional rules. The purpose of the practice, called zuo yuezi (“sitting the month”), is to give mothers a chance to fully recuperate from nine months of pregnancy and childbirth by using Chinese medicinal practices to bring balance to the body. Postpartum confinement dates back to first-century China and remains popular today with some modern adjustments: While traditionally the mother-in-law takes care of the new mother and baby, now women can hire “yuezi nannies,” have food delivered to their door, or even stay at a resort-like yuezi center.

Some rules of zuo yuezi seem draconian: Mothers may not go outside, wash their hair, take showers, drink cold water, pick up heavy items (including their children), or use air conditioning. The belief is that after childbirth a woman is in a weakened state, and any chill or gust of wind could get her sick. Mothers must also follow a strict diet. According to traditional Chinese medicine, during childbirth the mother’s body loses blood containing the “chi” life force, so the body is rendered cold (yin). To keep illness at bay, she must eat foods that are hot (yang), such as ginger, chicken, various soups, and teas. Research on zuo yuezi has mixed results—while some studies have shown the long recovery time promotes mothers’ health, others have linked the inactivity to cardiovascular problems and postpartum depression.

Still, for 31-year-old Kong, there was no question whether she would adhere to the practice. “Every mother tells you that you need to zuo yuezi,” she said. “If you don’t do it right, then you’ll have aches and pains.” After the births of both of her daughters, Kong stayed in a hospital a few days, then came home to a yuezi nanny who spent eight hours a day caring for her and her newborn. The nanny cooked meals for the family, cleaned the apartment, and changed the baby’s diaper. 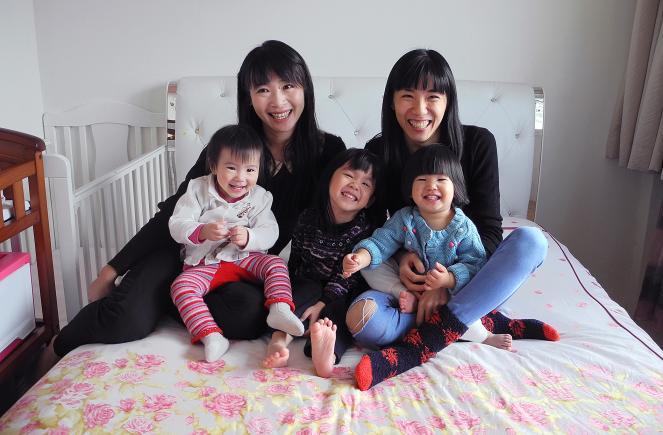 Kong felt restless lying inside all day. But when she tried to help wash the dishes, the nanny scolded her and told her to stay away from cold water. In a month’s time Kong went outside only a few times to the stores below her apartment, and even then she had to bundle up in a hat and coat. She ate pig knuckle and peanut soup, as well as dishes seasoned with sesame oil, ginger, and other Chinese herbs meant to restore the body and stimulate milk production.

Contrary to tradition, Kong showered and kept the air conditioning on after Christie’s birth during a hot and humid Taiwanese summer. At night, she and her husband tended to the baby’s cries themselves, then waited in anticipation for the nanny to ring the doorbell each morning. Relatives also helped grocery shop and helped watch Abigail.

In the past decade, more and more Asian women are spending their first month after childbirth in specialized yuezi centers, which provide 24-hour care to both baby and mother. Kong’s friend Sophia Tsai, 36, stayed at one of the high-end centers in Taipei after her second daughter, Catherine, was born. Tsai paid $400 per day for a room equivalent to that of a five-star hotel, complete with a massage chair. Flouting the stricter rules, center attendants washed and blow-dried mothers’ hair for them, and mothers could choose whether to keep their newborn at their side or in a supervised nursery. Nurses wheeled in five meals a day full of traditional yuezi dishes and taught new mothers how to care for their newborn. At night, Tsai could ask the nurses not to disturb her between 8 p.m. and 9 a.m. and to feed the baby during those hours with pumped breast milk.

Tsai knew that once her month was up, she’d not have such peaceful sleep or so much time for rest. “After you leave the center, the baby is by your side all night, and she’ll be acting either like a devil or an angel,” Tsai said. She believes her time resting gave her more energy to care for her two daughters and prevented aches and pains.

Kong, who spent her month at home, said that if she had a third child, she’d want to go to a yuezi center like Tsai, as it provides one of the main benefits of zuo yuezi—reduced stress. “The focus is on eating well, sleeping well, resting. That is what’s important.”

Angela is a former editor and senior reporter for WORLD Magazine. She is a graduate of the World Journalism Institute and Northwestern University’s Medill School of Journalism.