In The Crew, the streaming giant finally hits the brakes on over-the-top content

Netflix has broken a lot of ground in the entertainment business since it launched the streaming revolution back in 2013 with its first original series, House of Cards. That show was famously dark, subversive, and crammed with R-rated content.

Since then, pushing the envelope has seemed the go-to move for the platform. Educators, parents, and psychologists alike slammed its original teen drama 13 Reasons Why for glorifying suicide. Kids animated series She-Ra and the Princesses of Power regularly features transgender characters. The company even added lesbian aunts to its adaptation of the classic 19th-century novel Anne of Green Gables. Then, in September, it went too far, angering American audiences and attracting the attention of lawmakers with Cuties, a film that featured 10-year-olds twerking. A January report said 1 in 10 Netflix cancellations last quarter was a result of that debacle.

Perhaps that’s why the streaming giant has now decided to go in the one direction it hasn’t really tried before—traditional.

“The jokes get better and the cast chemistry stronger as the series goes on.”

The most shocking thing about Kevin James’ new workplace sitcom The Crew is how at home it would be on good, old-fashioned broadcast television. James, the onetime King of Queens, stars as a NASCAR crew chief with an eccentric team working under him. There’s the handsome but dopey driver. The neurotic, insecure marketing man. And the are-they-really-just-friends female office manager. The series even has a live studio audience.

Given the red-state setting, perhaps it’s no surprise that the show begins with a joke about the team’s Pavlovian response to the national anthem—as soon as that “Star-Spangled Banner” starts, hats come off and conversations halt midsentence till it’s over. It’s a cute moment, especially refreshing because it’s clearly laughing with the characters, not at them. Given that the anthem has become such a lightning rod in professional sports, there’s something a bit brave for the pilot to court underserved conservative audiences by faithfully depicting racing culture.

None of this is to suggest the show is political in any pointed sense. When the boss retires and his Ivy League–educated, millennial daughter takes over the team, Southern and Silicon Valley values clash plenty. But it rarely seems intended to target a whole class of people. 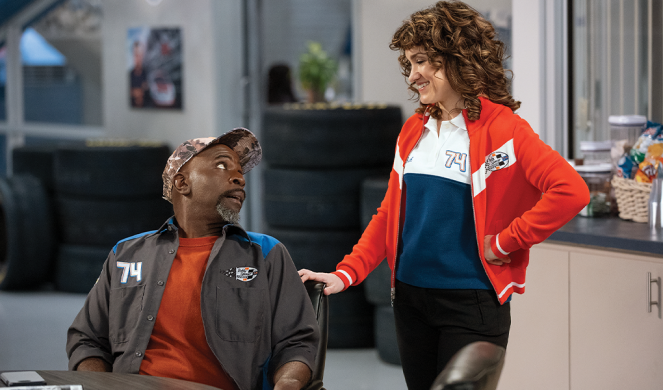 At times, The Crew even feels like a bit of a throwback for traditional TV. Though it has some mild profanity and off-color jokes here and there, there’s nothing like the rapid-fire double-entendres audiences have come to expect from some of the biggest sitcoms of recent years like Modern Family or The Big Bang Theory. As James told me during our recent interview, “It’s engaging for adults and it’s also fun. You can feel comfortable watching it with your whole family. And you don’t find too much of that now.”

The show’s conventional approach will likely feel a little stale for viewers used to the more modern style of shows like The Office, but the jokes get better and the cast chemistry stronger as the series goes on. By the fifth episode, James and crew have it running like, well, a well-oiled machine.

So far, Netflix’s surprising shift seems to be appealing to a lot of people. When I checked the platform’s daily popularity rankings, The Crew was sitting at No. 5 of all movies and series in the United States. Not bad for a new dog performing old tricks.

—This story appears in the March 13, 2021, issue under the headline “Shifting tones.”