For one February week in Texas, polar temperatures beat polarization

As Texas energy supplies faltered amid a record-breaking freeze, churches, businesses, and individuals stepped up to help each other where the state fell short.

During the third week of February millions of Texas homes were without power, water, or both, leaving residents desperate for help. Some reached out to local churches, many of which already had disaster relief teams in place. Mosaic Church of Austin was one of those to jump into action. It created an online form for community members to request help. More than 100 volunteers from the church delivered food, water, and other necessities in four-wheel-drive vehicles, the only way to get around on the ice and snow.

Mosaic also helped out when nursing home employees were unable to make it to work: Volunteers cooked, cleaned, and provided care for residents. Mosaic and other churches opened their doors as 24-hour warming sites. When the water went out, volunteers found ways to bring in water to flush toilets. One volunteer trucked in water from his pool, as melting snow was too time-consuming for the demand.

Some businesses stepped up too. Beloved Texas grocery store chain H-E-B garnered praise on social media for out-performing the government (“Let H-E-B run the grid!” read one sign). In addition to limiting quantities of items each customer could buy—water, propane, and yes, even brisket—to ensure sufficient supply to go around, H-E-B also managed to keep most stores open during much of the freeze. When the Leander store lost power while many shopped, H-E-B announced that shoppers could take whatever was in their cart, free of charge. 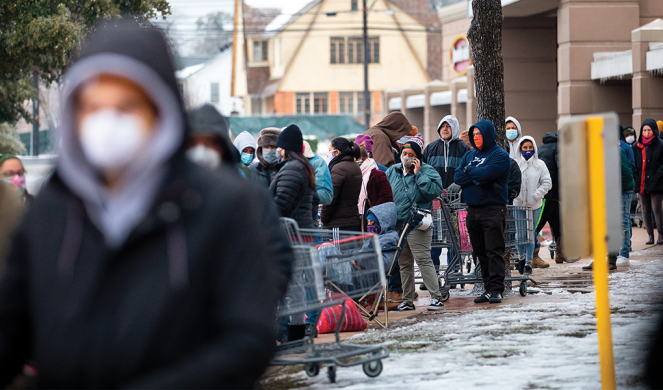 Lots of individuals acted on their own volition. Using the Nextdoor app and neighborhood “Buy Nothing” groups on Facebook, neighbors offered meals, water, rides, firewood, and charging stations for phones. Many pharmacies weren’t open for days, so those in need of medicine posted requests. Strangers gave each other life-saving medication when the only other option would have been a precarious trip to the ER. Neighbors let each other know which stores had food and supplies in stock, including gas—in short supply as tankers couldn’t navigate the roads to refuel gas stations.

Individual stories abound. Melissa Harjehausen took in a couple who had a newborn baby but no power or water at their home. The couple, whom Harjehausen had never met, went from a birthing center to her house with their newborn and stayed for the week. Ryan Sivley used his 4x4 vehicle to rescue 145 stranded drivers over two days on icy roads in Austin. Fifteen-year-old Meadow Quigley of San Antonio used her Construction Careers training at her high school to fix pipes that had burst in her house, then started knocking on doors of neighbors to see if they needed help.

More: Teens in Rockwall went door to door offering bread to anyone who needed it. Erik Howard took multiple five-hour round trips to bring 720 gallons of well water to Austin. Toshi Miya used his 4x4 to transport nurses to and from work. Jeanette Pérez delivered water for formula to a couple whose infant had been without anything to drink for nine hours. Steven Bush and Shane Mikeska delivered generators and fuel to neighbors in Taylor during the freeze, then helped fix pipes as the thaw began.

In a season characterized by political polarization and COVID-19 angst, many Texans chose to look outside of themselves and focus on something more important: loving their neighbor.

Sharla Megilligan Sharla is a graduate of the WORLD Journalism Institute's mid-career course.
COMMENT BELOW