Some Afghans seeking asylum in Germany have found refuge in Jesus, too

On an August Sunday afternoon, the streets of central Munich, Germany, showed signs of approaching Oktoberfest: Huge beer tents filled the festival grounds and hundreds of temporary cell towers were in place to support the two-week influx of 7 million visitors.

Two streets away, at the Freie Evangelische Gemeinde (Free Evangelical Church, or FEG), there were signs of another influx to Germany: refugees. As I walked upstairs, the bustle and aroma of coffee from the fellowship hour gave way to quiet in a room where Afghan refugees meet each week to study the Bible in Farsi.

Welcoming 1.6 million asylum-seekers since 2015 has strained the German social system, but it has also been a God-delivered opportunity for FEG to reach part of the refugee population.

In 2015, as the first wave of refugees arrived, two Afghan men came looking for a Persian church that had once met in the building. That community had left, but theology student Jonathan Case, 30, offered to read the Bible with the men. They explained how they had converted to Christianity, left home because of attacks from family members, and ended up as refugees. Now they wanted to learn more about their new faith. With one man translating for the other, they read the first chapter of the Gospel of Mark.

Each Sunday, the men returned. Soon they brought other Afghans. “The first time we had visitors, we read Matthew 23, when Jesus calms the storm and the disciples say, ‘Who is this man who can do this?’” recounted Thomas Giebel, 50, an IT professional who co-leads the study with Case. “The Muslims said the same: ‘We also want to know, who is this man?’ I said, ‘Come next week, and we’ll talk about who Jesus is.’” 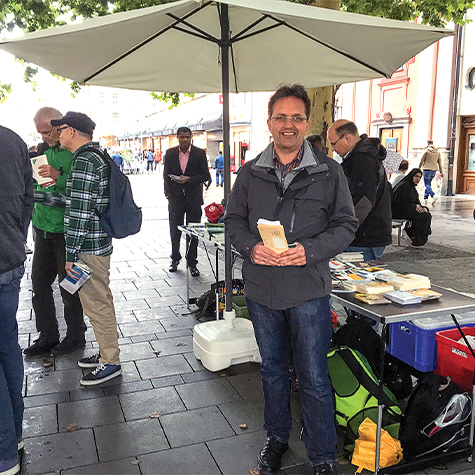 The study bore fruit: One by one, the men professed faith in Jesus. Giebel said converts described a typical progression: “‘The first time I came, I was Muslim. After a few visits, between Muslim and Christian. Now, I’m a Christian, and I want to keep coming back to study more.’”

Vincent Mohammad arrived in Germany in 2015, already a convert and looking forward to living in a “Christian nation.” But as he walked the streets of Munich, he was disappointed to find most churches empty. (WORLD has changed Mohammad’s name: He could face danger back in Afghanistan if he loses his asylum case in Germany.) Mohammad, 34, grew up in Iran, where his family moved to flee conflict in Afghanistan. At the café where he worked in Tehran, he met a man who gave him a Bible. He read and believed. Rising persecution of ethnic Afghans in Iran forced Mohammad to Turkey. There he registered his religion as a Christian, not knowing that this status of convert put him in greater danger. When he was able, he boarded a boat for Europe.

When I asked how he found the FEG group, Mohammad typed Farsi script into a phone app. A moment later, eyes shining, he held up the translation: Miracle. An outing with other refugees had gone awry; he rode the wrong bus, ended up in front of the FEG, and learned there was a Bible study in Farsi.

The Sunday I visited, 17 men and one woman attended, ranging in age from teens to mid-50s. Case and Giebel have contact information for 70 attendees. After opening with prayer, Giebel updated the group: Two members were recently deported and were now back in Kabul, Afghanistan, rejected by their families for their conversion and without means of support. Another man’s asylum plea, initially denied, was in appeal; another’s court date was in a few weeks.

The group studied 1 Thessalonians 5. Giebel explained each verse in German, and Mohammad translated into Farsi. “We try to prepare those who will return to Afghanistan,” said Giebel. “We chose 1 Thessalonians because it is a letter to the persecuted church. Afghanistan is a dangerous place to be a Christian. We stress that our security is not in Germany but in Christ.”

Some passages go against cultural norms. Before explaining 1 Thessalonians 5:12-22, Giebel stressed that Christians do good works not to earn salvation, but out of gratitude to God. A lively discussion followed in Farsi, and faces registered perplexity, then wonder, as they explained it to each other.

The group also wrestled with Paul’s admonitions to “Rejoice always” and seek no revenge. Refugee life is hard, and Afghans from different tribes brought their discord with them. Case said Biblical instructions to love one another are vital: “We encourage them to help each other in basic ways: to meet someone at the train station, or call each other during the week. Most of the refugees live alone and don’t know other Christians in the refugee centers. We want to help them build community.”

Before leaving, we prayed for the men in Kabul, and Giebel took a small offering to send to them. Mohammad’s prayer request was for his family in Iran: He hasn’t seen them in six years.