Mary’s (and Isaiah’s, and Gabriel’s) song

Immanuel looks at the birth of Christ from different perspectives

With her new album Immanuel, Melanie Penn has risen to the challenge of creating original Christmas music that neither exploits nostalgia nor struggles to be trendy. Of its 10 songs, only “Joy to the World” taps tradition.

“We wanted to salute the Christmas canon,” Penn told me of the carol’s inclusion, “and to give a nod to the fact that ‘Hey, we know we’re in a space where there’s lots of familiar music.’”

But those first two albums were pretty charming as well, showcasing the way that Penn’s childlike soprano and the introspective, faith-based lyrics to which it gave voice went with her pop-folk melodic flow, and the way that Shive could make that flow sparkle. Sonically, Immanuel is no exception.

In other ways, though, it is. It’s Penn’s first album, for instance, to appear on her Equally Well label, an imprint that takes its name from Ecclesiastes 11:6: “Sow your seed in the morning, and at evening let your hands not be idle, for you do not know which will succeed, whether this or that, or whether both will do equally well.” Whether writing and recording albums or leading worship at Redeemer Presbyterian Church in New York City, Penn has taken to heart the verse’s call to avoid the devil’s workshop.

Immanuel also demonstrates Penn’s ability to write from points of view other than her own, perspectives specified by each song’s parenthetical subtitle: “Love’s Coming Down (Isaiah),” “All Things Are Possible (Gabriel),” “Great Things (Mary),” “Gift of Love (Angel Chorus),” “What Child Is This (Joseph)” (not the carol), and the like.

Inhabiting characters was, according to Penn, both “really hard and really wonderful.” “And,” she adds, “it could also be that this album got me writing again in a safe way.” 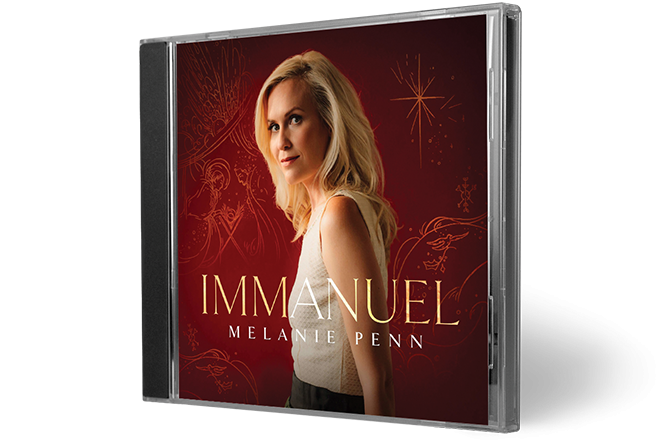 The reason that she hadn’t been writing, safely or otherwise, was that in May 2016 she was hospitalized with acute endometriosis. One month later, she underwent a hysterectomy and began a long period of recovery. With Christmas approaching, she began work on a song that would eventually end up on Immanuel as “Follow the Star.”

“As I started writing the verses, I realized that it was about one of the Wise Men. I finished the song and sang it at a Christmas show, and the response was really good. Then two weeks later I wrote a song from the perspective of one of the angels in the angel chorus. And then I had a sense that I was kind of onto something.”

The irony of what she was onto—telling the story of the Greatest Birth of All after losing the ability to give birth herself—wasn’t lost on her. Not surprisingly, the album’s Mary song proved particularly hard to write. “A pregnancy is what God used to usher in this new era of God dwelling with us. But I felt so incredibly distant from that experience that I didn’t even know how to break into it. Eventually, though, I reconciled all those feelings.”

Penn also reconciled herself to the title Immanuel despite worrying at first that its simplicity might fail to convey the recording’s conceptual nature and multiple viewpoints.

“Every other title I came up with just didn’t feel good. And I realized, ‘You know what? This isn’t my story. This is a story about Immanuel. This is God’s story, and He should have the title.’”