The sun rose on Wednesday morning to an unclear forecast for the final results of the 2020 presidential election. By daybreak, at least five crucial states still hadn’t been called: North Carolina, Georgia, Wisconsin, Michigan, and Pennsylvania.

Still, President Donald Trump declared he was winning the election early Wednesday morning, and he vowed to fight Democrats on results he said could be faulty. In an early morning email to supporters, the Trump campaign warned: “Despite the numbers that are very obviously in favor of your president, the Democrats will try to steal this election!”

The reality was far more unclear—and it called for far more restraint—as election officials continued to count votes, even in states where the current count favors Trump. Those states include North Carolina, Georgia, Michigan, and Pennsylvania. But the final outcome is still uncertain.

By Wednesday morning, it appeared Democratic nominee Joe Biden had flipped Arizona, picking up 11 crucial electoral votes in a state Trump won in 2016. Biden also led by a wisp in Wisconsin—he was ahead by 0.2 percent early Wednesday, as election officials continued to count absentee ballots in the state.

The outcome of mail-in ballots will likely take center stage on Wednesday, particularly in Pennsylvania, with its coveted prize of 20 electoral votes in the balance. The state could prove the tipping point for either candidate.

Trump was leading by 12 points in Pennsylvania by 6 a.m. on Wednesday, but it appeared at least 36 percent of the state’s votes hadn’t yet been tabulated. It’s possible the remaining mail-in ballots could break for Biden, creating a “blue shift” that some pundits predicted. If Biden pulls close—or if he pulls ahead—voters may need to prepare for the strong possibility of campaigns pursuing litigation over the results.

With the outcome still unclear, Trump ally and former New Jersey Gov. Chris Christie criticized the president early Wednesday for declaring he had clearly won states that hadn’t yet been called: “There’s just no basis to make that argument tonight—there just isn’t.” 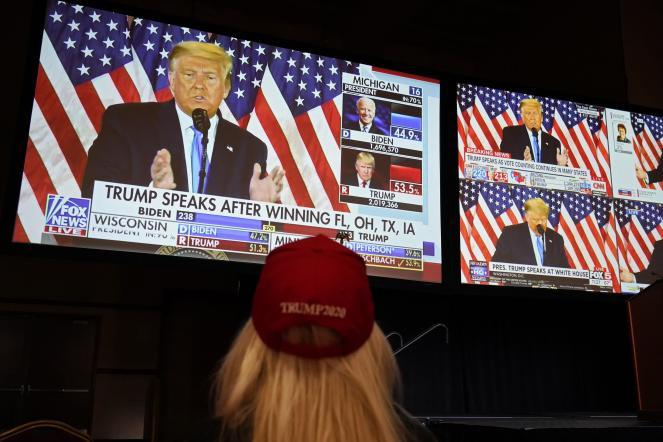 A live broadcast of President Donald Trump speaking from the White House is projected on screens at an election night party in Las Vegas on Tuesday. AP Photo/John Locher

Meanwhile, there was also criticism to go around for pundits and big media outlets that had predicted a Biden victory—or even a Biden landslide—ahead of Tuesday’s contest.

Conservative commentator Henry Olsen reserved some of that criticism for himself, after his own prediction of a clear Biden victory earlier in the week.

At 9 p.m. on Tuesday, as election results started rolling in, Olsen wrote on The Washington Post’s election blog: “So I don’t like to eat crow, but the more I look at the data the more I think I was too optimistic for Biden.”

A minute later he wrote: “I’m not saying Biden won’t win the presidency. It’s just not shaping up as a Biden +7 national win in the popular vote, and he needs to win by 6 or so to have a decent shot of carrying those states.”

A half-hour later, Olsen was even more candid: “I never like being wrong professionally, but it’s clear that Biden is not going to win the national vote by anything like what every major poll’s crosstabs implied. That means polling error of mammoth proportions—the industry will have a lot of serious thinking to do.”

Big media outlets have some serious thinking to do as well. Even as national polls showed Biden leading by double digits, polls in crucial swing states showed him leading by only single digits—well within the margin of error for Trump to pull ahead on election night.

Some news outlets noted those numbers but still indulged in speculation over a Biden landslide, creating a narrative that likely led to landslide expectations among many voters.

By the time Trump won Florida on Tuesday night—including a significant number of Hispanic voters in the Sunshine State—that speculation was evaporating, along with the once-bubbly morale of political anchors on some television networks.

Anchors at MSNBC have long unveiled their contempt for Trump, but their refusal to consider an alternative outcome to a Biden romp proved embarrassing. As the race grew closer on Tuesday night, one anchor furiously tried to map out scenarios for Biden to win the election without winning Pennsylvania.

“That is crazy,” MSNBC anchor Rachel Maddow replied. “I mean, I have done that math myself, and I know it’s true, but I can’t believe we’re talking about it as one of the things that might actually happen.”

News networks are likely more sober on Wednesday morning about what might actually happen, even as a Biden win remains a possibility.

And as voters wait on presidential results—likely at least through the day on Wednesday—they’ll also wait for Senate results. By Wednesday morning, those results appeared nearly evenly split, with some races still up in the air: another result some pundits never seemed to consider might actually happen.