On the morning after a bruising Democratic debate in Charleston, S.C., former Vice President Joe Biden stood in the fellowship hall of a local Baptist church with a dark smudge on his forehead.

It was Ash Wednesday, and Biden had dropped by a Catholic church earlier, where a priest applied ashes in the shape of a cross—a traditional symbol of repentance at the beginning of Lent. “Remember that you are dust,” a priest often says during the service. “And to dust you shall return.”

In the Democratic primaries, Sen. Bernie Sanders, I-Vt., was surging and Biden was losing at an embarrassing clip. The candidate was on the verge of a crushing end to his long political career.

On this rainy morning in Charleston, Biden sounded more nostalgic than enthusiastic at the pastors’ breakfast at Mt. Moriah Missionary Baptist Church. He told longtime Congressman James Clyburn, D.-S.C., “Even if I’m not around, you still have a lot of work to do.”

It turned out Biden still had a lot of work to do as well.

Three days later, he vanquished Sanders in the South Carolina primary. The win was a game-changer for his campaign. The landslide victory set him up for a spree of wins on Super Tuesday, and the lagging candidate raced past Sanders in the delegate count.

Biden’s surge is undeniable, but it comes with a caveat: Though Biden has endured plenty of heat in his primary run, he hasn’t faced the bright light a two-man race—and possibly a general election—will bring. Even for a former vice president, that’s a new kind of spotlight.

Primary results show Democrats leaning away from Sanders’ socialist headwinds, but they also raise questions for Biden. He rejects Sanders’ democratic socialism, but his own positions show he’s not the Democratic moderate some media outlets suggest. Meanwhile, how will he hold up under the intense scrutiny blowing his way?

It’s a critical question, since history shows even the strongest campaigns can become dust in the wind. 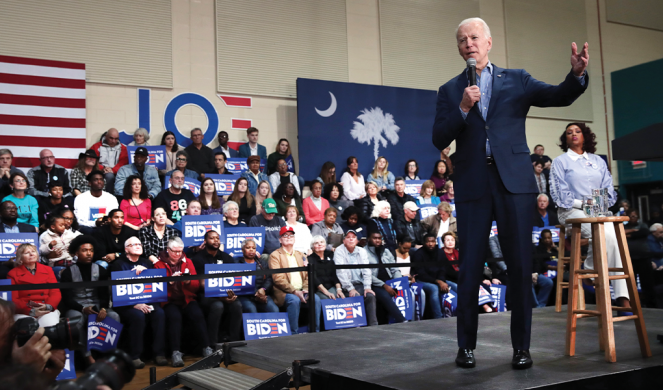 NEITHER CANDIDATE PLAYS the 1970s classic “Dust in the Wind” at rallies, but Biden’s campaign does favor easy ­listening.

On the night before South Carolina’s primary, Biden shook hands with supporters at a rally in Spartanburg, S.C., as Steve Winwood’s 1980s soft rock tune “Higher Love” played in the background.

It was music well suited for a crowd pushing 50 and older. For more than an hour, Biden gave long answers to short questions, and at one point told the sometimes-distracted crowd, “Look, I know this is boring, but it’s important.”

A few hours earlier, at a rally for Sanders, most of the crowd in Columbia, S.C., looked 40 and youn­ger. Giant speakers blared the 2009 rock anthem “Uprising”: “Interchanging mind control / Come let the revolution take its toll.”

Before Sanders took the stage, a hip-hop duo from Austin, Texas, freestyled campaign lyrics while the crowd cheered: “We’re like Robin Hood, and we’re ready for war: We take from the rich and give to the poor.”

It was a blunt summary of the big promises Sanders repeated with gusto at the rally: He’d raise taxes on the wealthy and offer Americans free child care, free college tuition, student loan forgiveness, medical debt forgiveness, and Medicare for All. (In this first Southern state on the primary calendar, the campaign passed out signs reading, “Medicare for Y’all.”)

The young crowd hung on Sanders’ words and boomed with energy. But if the Democratic contest had come down to a choice between a candidate admitting that policy discussions could be boring and a candidate vowing to remake the federal government, most primary voters appeared to choose wonkiness over wokeness.

Indeed, the enthusiasm of a crowd isn’t always a measure of a candidate’s strength. Even as Sanders’ events pulsed with the kind of verve that President Donald Trump’s rallies still draw now, the vigor hasn’t always translated into votes as the bulk of the primaries unfold.

Back at Mt. Moriah Missionary Baptist Church in Charleston, the crowd of congregants from local black churches politely welcomed Biden and other Democratic candidates, but they held their warmest applause for when the host acknowledged the local pastors at the breakfast.

Still, black voters overwhelmingly picked Biden: In South Carolina, he won over 60 percent of African American votes. David Cakley, a member of Mt. Moriah, said he preferred Biden, and worried about Sanders. “I think he’s too far left,” he said. “His programs sound outlandish and unaffordable.”

“Outlandish and unaffordable” doesn’t make a great campaign slogan, and Biden will likely try to make such words stick to Sanders. But Biden faces questions about how affordable his plans are too.

He says he doesn’t favor Medicare for All, but he does propose an expansion of the Affordable Care Act (also known as Obamacare) that his campaign estimates would cost $750 billion over a decade. Biden proposes a $1.7 trillion climate change plan, and a higher ­education plan that would cost $750 billion a year. (The plan would include offering two years of free community college tuition.)

A Vox editorial praising Biden declared that if elected, “Biden would be the most progressive Democratic nominee in history.” While Biden falls to the right of Sanders (who estimates his Medicare for All plan would cost at least $30 trillion over 10 years), he still lands to the left of President Barack Obama.

If the discussion of Sanders’ democratic socialism sucked the air out of the room for Democrats worried he’s too extreme to win a general election against Trump, Biden still must explain how we would fill the void in a palatable way, while facing a challenger with a formidable style. 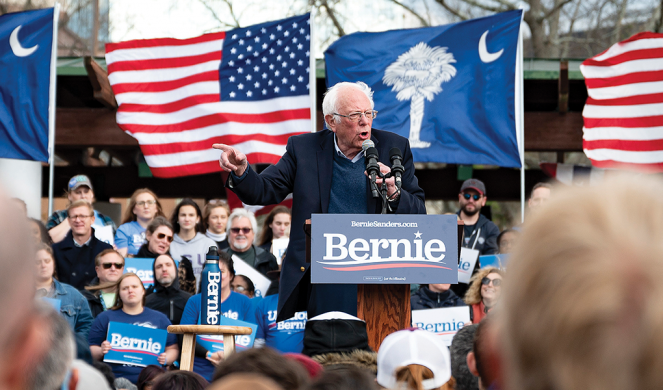 AT BREAKFAST IN CHARLESTON, Biden didn’t talk much about how he would pay for his plans, but he seemed at ease in the crowd of churchgoers from around the state. He mentioned his Catholicism and quoted from the book of James: “Faith without works is dead.”

But in the same state where a priest had just applied ashes to Biden’s forehead, another priest had denied communion to the candidate just a few months before.

Robert Morey, a Catholic priest in Florence, S.C., told a local newspaper he withheld communion from Biden during a late October visit because of Biden’s pro-abortion views: “Any public figure who advocates for abortion places himself or herself outside church teaching.”

During his decades as a senator from Delaware, Biden held a position that was once more common in the party: Abortion is a tragedy, but it should remain legal. For decades, the Democratic platform said abortion should be “safe, legal, and rare.” In 2012, party leaders said they supported “safe and legal abortion, regardless of ability to pay.”

In 2016, Democratic nominee Hillary Clinton called for the repeal of the Hyde Amendment—a measure that forbids federal funding for most abortions—and the party platform followed.

Biden didn’t publicly go along. At a public forum last June, he said he still supported Hyde. The backlash was swift: Pro-abortion groups and the other major Democratic candidates lambasted him for a position the party held for decades. Within 24 hours, Biden caved: He said he now supported approving federal funds for abortions. For Kristen Day, the longtime executive director of Democrats for Life, Biden’s reversal was an “extreme disappointment.” Day grabbed national attention earlier this year when she asked former candidate Pete Buttigieg in a televised town hall if he thought the Democratic Party had a place for pro-life Democrats. Buttigieg dodged the question.

Meanwhile, Bernie Sanders didn’t. When a moderator asked the Vermont senator the same question a couple of weeks later, Sanders replied, “I think being pro-choice is an essential part of being a Democrat.”

At the rally in Columbia, S.C., Sanders championed abortion. He condemned conservatives who “say they want the government off their backs,” but who don’t support abortion: “I say to those hypocrites, It’s women who should be able to control their bodies, not the government.”

Whatever Biden thinks about pro-life Democrats, his flip on Hyde shows he firmly toes the pro-abortion line. In a New York Times survey about abortion, Biden said he supports federal funding for Planned Parenthood, he favors requiring judicial nominees to support Roe v. Wade as settled law, and he wouldn’t consider a pro-life running mate.

Day says the candidates’ hard line on abortion is distressing. In a hotel conference room near downtown Charleston during the week before the South Carolina primary, Day led a press conference for the handful of journalists who showed up. She said Democratic candidates are alienating millions of pro-life Democratic voters.

A few other pro-life Democrats were on hand, including Terrisa Bukovinac (see “Unconventional ally,” Feb. 15, 2020). Bukovinac clutched a model of a 22-week-old unborn baby. The lifelike model had fully formed fingers, toes, ears, and facial features, and it felt heavy. (The pregnancy website What to Expect says a 22-week-old unborn baby is about the weight and length of a 1-pound bag of sugar.)

A few hours later, Senate Democrats defeated a bill to ban abortion after 20 weeks. They also blocked a bill that would have required physicians to extend life-saving medical care to babies who survive abortions.

Harriet Bradley, head of the Georgia chapter of Democrats for Life, told reporters she knows pro-life Democrats leaving the party over abortion: “They will leave for that one issue because the life of the unborn is so important to them. It’s important to me.”

THE NEXT FEW WEEKS will be crucially important for Biden and Sanders.

Though Sanders wasn’t far behind Biden in the delegate count after Super Tuesday, he faced another round of primaries with uphill battles over the coming weeks. Sanders likely would need major victories in at least a few states to regain his momentum. (After the massive turnaround on Super Tuesday, Biden shouldn’t think another reversal is impossible, but the path looks tough for Sanders.)

As the heat cranks up on Biden, he’ll likely face questions about lapses during some of his recent public appearances. He stumbled when he quoted the Declaration of Independence, and he also referenced “Super Thursday.” (Biden has acknowledged he struggles with a stuttering problem, and that could be affecting his speech in some cases.) He should also anticipate questions about Ukraine and impeachment.

In the meantime, talk of a contested convention has grown quieter, though it’s still mathematically possible one of the candidates may not reach the 1,991 delegates needed to secure the nomination ahead of the Democratic National Convention in July.

Still, Sanders didn’t appear to be winding down. His supporters are intensely loyal, and some have already discussed strategy for the convention if Biden doesn’t lock down the nomination ahead of the national meeting.

At the Columbia, S.C., rally, Sanders supporter Derrick Reeves tapped into the devotion many of Sanders’ followers express: “He’s the only candidate who’s ever really spoken to me, and I’m 42 years old.” If the party does head to a contested convention, Reeves said he’d like to go: “I’d like to see millions of us showing up and demanding a legitimate candidate.”

It’s the kind of dramatic showdown most Democratic leaders likely hope to avoid. Going into a general election battle against Trump, Democrats want to ditch an unofficial slogan that’s dogged them through the primary season: Divided we stand.

Jamie is national editor of WORLD Magazine. She is a World Journalism Institute graduate and previously worked for the Charlotte World. Jamie has covered politics, disasters, religion, and more for WORLD. She resides in Charlotte, N.C.