Making a deal with the devil

“I have the honor and privilege to announce that the foreign minister has signed the security cooperation framework with his counterpart [in China] a few days ago,” Solomon Islands’ Prime Minister Manasseh Sogavare announced to his Parliament on April 20. He claims the deal was meant to beef up policing capabilities and diversify security. “We entered into the agreement with China with our eyes wide open,” despite multiple countries—including the United States—warning that such a move could bring instability to the Indo-Pacific region.

Solomon Islands has a foreign policy motto of “Friend to all; enemy to none.” And yet, Sogavare’s move toward China might suck his country into the eye of a geopolitical storm of increasing hostilities.

In March, Sogavare confirmed he was seeking a deal with “our new friends” in China after a draft of the security deal leaked on social media. The prime minister claims that his country’s current security deal with Australia insufficiently protects China’s investments, evidenced by looting and burning in Chinatown, part of Honiara, capital city of Solomon Islands, during November riots, touched off by Sogavare’s diplomatic switch from Taiwan to China.

Sogavare announced the signing of the new security deal only days after their longtime friend and ally Australia sent a delegation to oppose the deal and days before U.S. senior officials arrived in the capital of Honiara with the same intent.

Japan likewise has sent diplomats to the country to express their concerns. Those concerns center on the possibility that China would build a military base in the strategically located country. But it’s unlikely either country will make the final deal public.

The now-public draft version contains language vague enough to sail a navy fleet through, “according to [China’s] own needs,” and stay for unspecified amounts of time. “Friendly conversations” will determine financial backing of exercises where China may provide “police, armed police, and military personnel” to a country with a police force of 1,000 people.

Australia currently provides police training, but China sent police advisers earlier this year to train for riot response. Having divergent training methods and motivations could splinter instead of unify the local force. 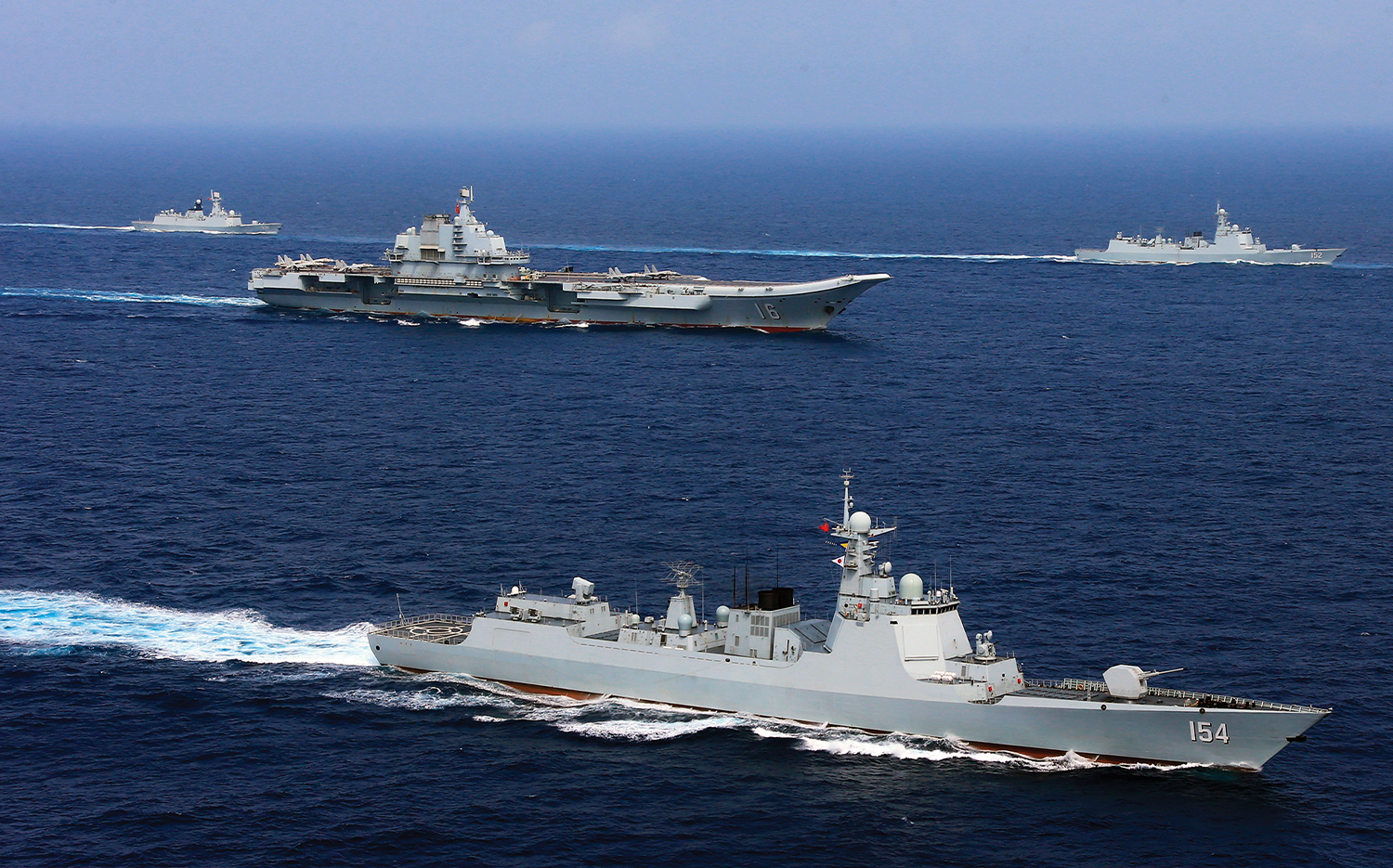 The fleet of the Chinese navy sails during a naval exercise in the western Pacific. Imaginechina via AP

THE PEOPLE’S REPUBLIC OF CHINA (PRC) looms more than 300 times the size of the tiny island nation. Even though its capital is more than 4,000 miles away, China could benefit from unfettered access to Solomon Islands’ southern island of Tulagi. During World War II, America fought Japanese forces for control of that island’s deep port to prevent interruption of supply routes between the U.S. and Australia.

Tulagi factored into the beginning of Sogavare’s fourth stint as prime minister in 2019 when he elevated Beijing as diplomatic partner. Soon after, his administration began a secret and illegal deal with China Sam Enterprise Group that would have allowed it to lease the entire island of Tulagi for up to 75 years. The deal was leaked to the public, and Sogavare promptly vetoed it. Now he’s made a new security deal with China, giving China access to not just Tulagi but all 992 of the country’s islands.

After the draft deal leaked, the Chinese Embassy posted a WeChat message saying the threat of a Chinese military base on Solomon Islands is fake news from people with a political agenda. But one can plot the points of China saying one thing and doing another. For example, in Djibouti, China claimed to only want to provide facilities for vessel personnel to get better rest and replenishments. Djibouti now says it is a home port to the Chinese People’s Liberation Army Navy.

Villagers in the Solomons, meanwhile, have concerns about rising prices of soap and kerosene for cooking that demonstrate their dependency on imports from China. Only 3.9 percent of goods come from inside the country. Meanwhile, China’s aid to the country has dipped, while its loans have increased to $1 billion, drawing the country into greater dependency.

Even if China has no military plans for Solomon Islands, Solomon Islanders feel unsettled about Prime Minister Sogavare’s secrecy and lack of transparency. Both the Tulagi and China deals only became public when a concerned party leaked them. Solomon Islands’ 1978 constitution allows the executive branch to enter into such agreements, but wise leaders seek wisdom and input when planning such a significant move. 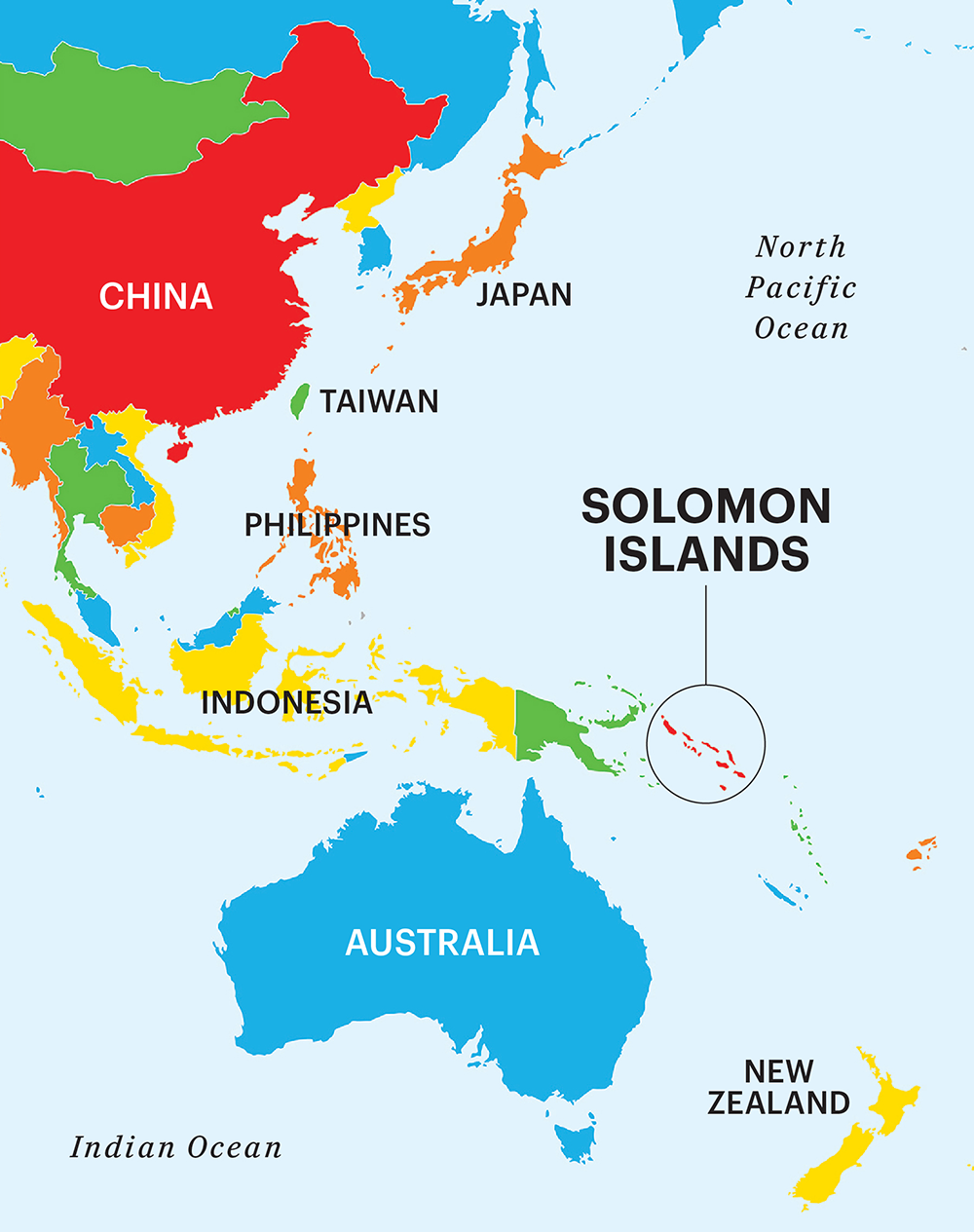 SOLOMON ISLANDS’ POPULATION is predominantly Christian, even if nominally so. One foreign national described Solomon Islanders’ viewpoint this way: “They know China’s human rights record, and they’re appalled by it. How could their government take money from them?” The presence of PRC police advisers to provide riot training to Solomon Islands’ police and the basic communist ideology of China likewise concern island residents.

China leans on its propaganda machine to tout its contributions, but Australia remains Solomon Islands’ largest donor and partner. With Australia’s campaign season leading up to a May 21 election, the candidates are bickering over who bears the blame for Sogavare signing the security deal.

Scott Morrison, sitting prime minister, claims the deal wasn’t a surprise, while the campaign manager for opposition leader Anthony Albanese says it was the worst policy failure since World War II. But Australia remains committed to its security deal with the island nation and has made clear that a Chinese military base in the Solomons is “a red line.”

The U.S. closed its embassy in Honiara in 1993, making its support from Port Moresby in neighboring Papua New Guinea invisible. News of the impending security deal with China sped up the reopening of the U.S. embassy in Honiara, a move Solomon Islands’ opposition party applauded. The presence of an American flag fluttering in the breeze can start to counteract the myriad of Chinese flags flying above construction projects for the 2023 Pacific Games.

In the midst of the furor, Federated States of Micronesia President David Paneulo sent a letter to Sogavare. He offered his government’s perspective about dealing with China. His country accepts grants from China, but no loans. Paneulo raises concerns about the long-range consequences of Sogavare’s actions. He points out that because the U.S. and China are increasingly at odds, signing this deal exacerbates a tense situation. Ultimately, Solomon Islands needs a wise government dedicated to transparency and concerned about its residents’ interests.

With Sogavare threatening to postpone elections until after the country hosts the 2023 Pacific Games, the Pacific islands could find themselves at the epicenter of confrontations between powerful opposing forces, hosting fights between their friends.